It’s understandable to be intimidated by the prospect of learning another language.

But learning French probably isn’t as hard as you think.

Here are some of the most common fears about learning French, as well as the reasons why the scary parts aren’t actually scary at all.

5 Reasons Learning French Seems Hard (and Why It’s Not!)

Reason #1: There are so many silent letters!

You’ve probably seen words such as beaucoup (a lot, many), which is pronounced like “bō-kü.” Or how about the word roux (red), in which the x is silent?

French is filled with silent letters, which looks scary on paper (literally). How are we supposed to remember which letters to pronounce and which to ignore?

Sure, the p in beaucoup is silent, and that’s weird. But guess what? In French, the letter p is always silent at the end of a word. If you see an extra p with an unaccented e tagged on, such as in the word l’enveloppe (envelope), then you know to pronounce the p sound.

Le bateau (boat). Le château (castle). Le flambeau (torch, candle). They all have the letters eau, and they all make the “oh” sound.

So once you memorize the rule, you’re all set! You’ll know exactly how to pronounce that sound when you see the word written out.

On the other hand, let’s look at the English word “cough.” The ough makes the “off” sound.

English pronunciation is very inconsistent. Yet you’ve managed to master the language, right? If you can dominate English, you can easily memorize the most common pronunciation rules for French.

For guidance to French pronunciation, check out Audio French, a free online dictionary that provides recordings of practically every French word imaginable. My favorite parts of this resource are the word videos, which focus on both the spelling and pronunciation of each word.

Reason #2: The number of verb tenses is overwhelming!

When you’re speaking in the present tense, verbs are pretty self-explanatory. You just have to memorize the basic rules, and you’re good to go!

But what if you want to tell a story about something that happened in the past?

Maybe you want to talk about something that will happen tomorrow.

Each of those scenarios requires a different verb tense. And there are many, many more verb tenses.

The same is true in English. However, those of us who were raised with English as our first language don’t usually think about the rules. Speaking and writing just come naturally.

Learning the rules as an adult, though? Sure, that’s a little overwhelming at first.

The good news: There are tons of engaging ways to practice

Admittedly, truly mastering all the French verb tenses is a lifelong journey. The only true way to improve is to keep practicing.

But no, “practicing” isn’t code for “staring at your large textbook for hours.” There are many interesting ways to practice your verb tenses!

There are numerous websites, such as Quizlet and Digital Dialects, that provide creative verb exercises, including flashcards, games and quizzes.

You can also watch French films with French subtitles to see what verb tense the characters use.

Another study resource would be FluentU, a language learning program that teaches with authentic French videos. Each clip comes with interactive captions that provide word translations and grammatical details so you can learn verbs in context. You can then review with personalized flashcards and quizzes.

Once you’re more confident with using verb tenses, practice speaking with a French-speaking person. Immersing yourself is the best way to dive into learning a language. italki gives you the opportunity to quickly and conveniently connect with a French tutor online. Having one could be helpful for targeting some of your specific struggles with verb tenses.

Reason #3: Every noun has a gender—help!

The English language is difficult in many ways, but I’m grateful every day that my native tongue doesn’t involve gendered nouns. What a hassle.

Yeah, it gets confusing.

The good news: There are some hard and fast rules about noun genders.

I won’t go into too much detail here. If you want a complete guide to gender rules in the French language, read this piece.

Yes, as is often the case with rules, some gender rules are broken. There are always exceptions to the guidelines.

Most words that end in an unaccented e are feminine. 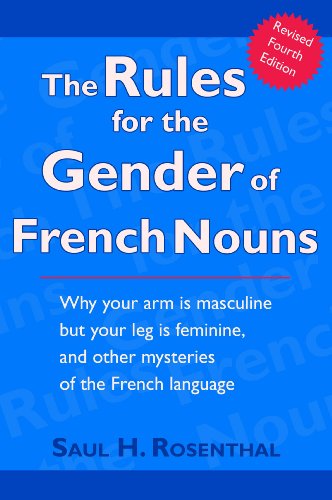 There are also masculine and feminine versions of certain words, such as careers. A male actor is un acteur, and an actress is une actrice. Makes sense, right?

These are just a few of the gender guidelines. But once you catch on to the rules, you can usually guess if a noun is masculine or feminine.

If you want an amazing, in-depth guide to these rules, check out “The Rules for the Gender of French Nouns.”

Reason #4: The sentence structure is different from English!

In English, we say, “His hairy ears are disgusting.” (We’ve all said that at some point, right?)

The adjective, “hairy,” or poilues, comes before the noun in English but after the verb in French.

This is just one example of how French sentence structure can differ from English structure. It’s true, French word order can be hard to remember.

The good news: French has the same parts of speech as English.

I recently moved back to America after spending eight months in China, where I studied Mandarin.

After studying Spanish from first to eighth grades, then studying French for seven years, let me just say… Mandarin is a whole other ball game.

Learning that language made me very grateful when I returned to my French studies. Like English, French has subjects, verbs, objects, adjectives, adverbs, pronouns, prepositions… it’s a relief.

Before you dive into adjectives and adverbs, I recommend learning basic sentences. Once you have a handle on those, try inserting modifiers. Taking things one step at a time can keep you from getting confused. For example:

J’aime ses cheveux magnifiques. (I like her gorgeous hair.)

So even if some of those parts of speech are in a different order than they are in English, just know that French sentence structure mirrors English more than most other languages do. So if you want to learn a language, French could actually be one of the easiest options, not hardest!

Reason #5: There are accent marks!

Another thing I love about my native tongue is that English requires zero accent marks. Talk about making things simple!

When you see words such as français (French) or préférée (favorite), you might shy away from trying to speak them aloud. What are those accent marks all about? What do they mean, and how are we supposed to know when to use which one?

The good news: There are only five French accent marks, and they’re helpful.

Yes, accent marks are prevalent in French, but there are only five of them. That’s much fewer than languages like Livonian and Hebrew. You can remember just five accent marks, right?

Here’s the gist of the French accent marks, the letters they’re used with and their French names:

My favorite part of French accent marks is that they’re not a burden at all. They’re actually helpful! French pronunciation can be hard, and the accent marks assist us in accurately pronouncing or grasping the meaning of words.

For example, l’accent aigu on an e tells us that we pronounce that é like “ay.” So the word passé is pronounced approximately like “pass-ay.”

Once you memorize a measly five accent marks, so many doors are unlocked.

Laura Grace Tarpley is a writer based in Athens, Georgia. She has spent the past four years living in and exploring France, New Zealand and China. She runs the blog Let’s Go Tarpley!, where she writes city guides and budget travel tips.