What better way to experience la vie en rose than in cafés, bars, and discothèques?

After studying common French behaviors and becoming more adjusted to French life, you’re probably dying to have a celebratory night on the town with friends while abroad.

And if you’re self-studying French at home, there’s nothing stopping you from bringing a bit of France to your home country’s nightlife.

Here are some essential French phrases, best accompanied by your drink of choice and some friendly Frenchmen!

Must-Know French Phrases for a Hip and Happening Nightlife 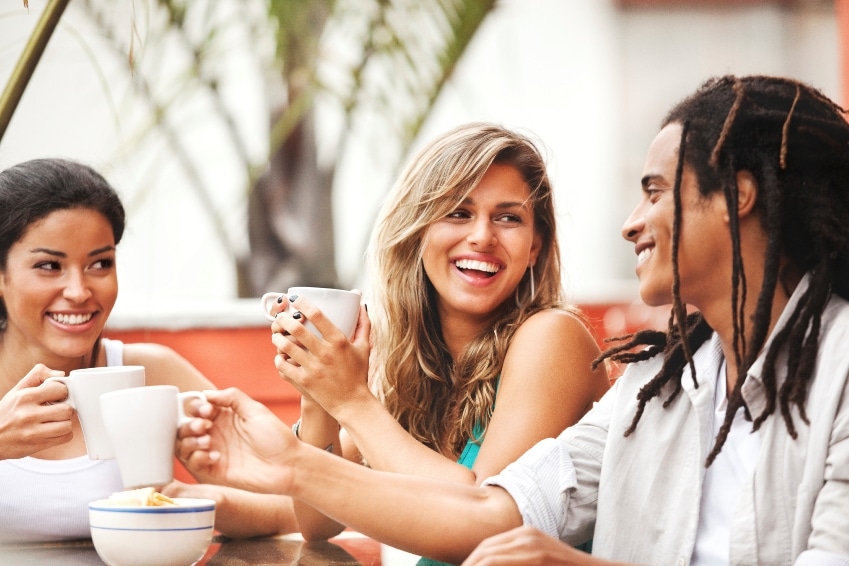 Get the night started

Meaning: What are you doing tonight?

How can you start your evening if you don’t know where the party will be?  This simple yet efficient phrase is all you need to find the best bars and clubs for the night!  You can also ask “Tu vas sortir ce soir ?” or, “Are you going out tonight?”

Meaning: Do you want to get a drink?

This is another phrase that will be sure to get your night started.  Although sometimes used as a pick-up line or to ask someone out on a date, it is just as common for friends to ask one another this question.  The time to get a drink could start as early as 5 pm or so, or the l’heure de l’apéro (pre-dinner drink time).

A waiter at a café or restaurant might ask this in the late afternoon or early evening.  A French apéritif is traditionally a drink such as a pastis, kir, or porto meant to whet the appetite.  Among young people, to prendre l’apéro is a fun, informal way to slowly start a night of partying.  An apéro can take place at a bar or café, but also at someone’s home.  In additional to traditional aperitifs, you can also have beer, wine, or even cocktails.

Meaning: Do you have anything to snack on?

As in the US, French bars will often offer small things to eat while you enjoy your afternoon or evening drinks. Take a look at these regional French food items that may appear during your nighttime adventures. You can also ask “Est-ce que vous avez des chips ou des cacahuètes ?”  (Do you have any chips or peanuts?)  These are the most common bar snacks, but other places may offer cornichons (pickles), olives, or even saucisson (cured sausage). 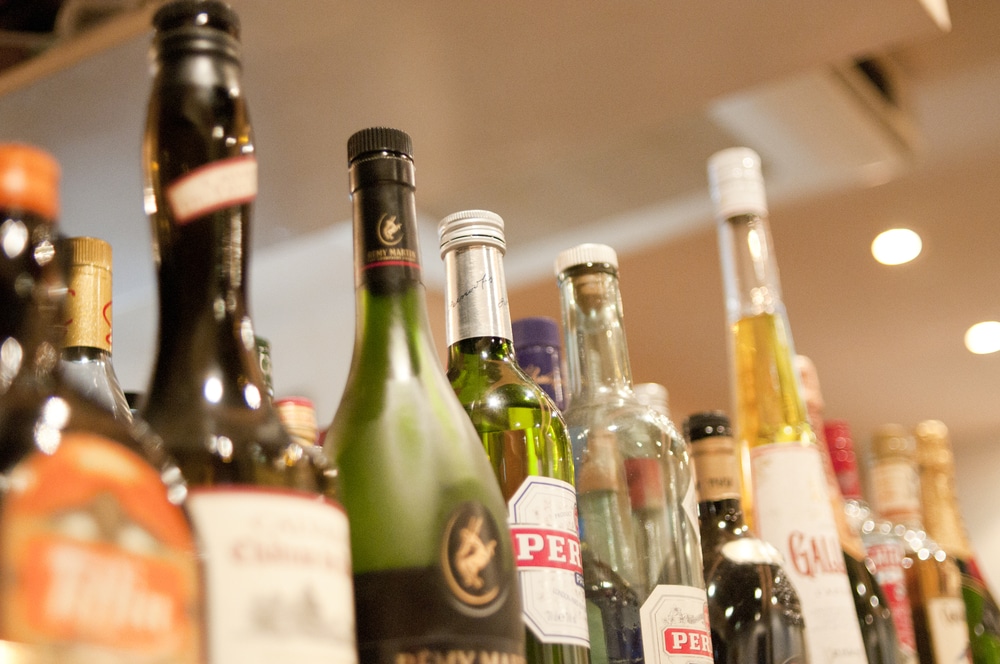 Meaning: I would like a pint of pale ale, please.

Blonde beers are the most common in France, and this designation usually refers to the color rather than the kind of beer.  Leffe and 1664 are two very popular beers in France.  You can also ask for un demi, which is a half pint.

Meaning: I’ll have a glass of rosé please.

Rosé is a popular wine for the summer time, drunk cold.  You can also ask for a verre de blanc/rouge (glass of white or red).

Meaning: Another round please!

Literally meaning, “Can we have the same thing, please?” this phrase is the most simple for asking another round from the waiter.  If you’re feeling generous and want to pay the next round you would say, “Je paye ma tournée !”  If you want to ask the waiter for just your drink, you can say, “Encore un autre, s’il vous plaît.”

Meaning: The bartender is really cute!

Another reason to pay your round! 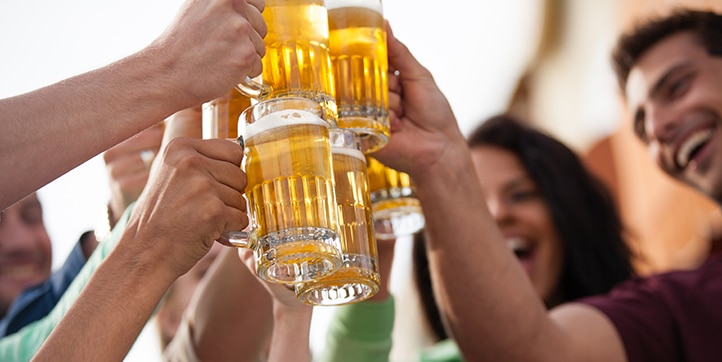 When you would like to trinquer (toast) someone there are many ways to express this feeling of joy and celebration in the French way!

Meaning: To yours (your health)!

This is the formal way to say it, or is also said to several people

Meaning: To yours (your health)!

The informal version, or to one person.

Literally the sound clink clink – when you don’t actually go around the table clinking glasses, this is useful!

Another popular summer activity in Paris is to picnic and drink on the quays of Seine or the Canal St. Martin.  As soon as the warm weather hits, hoards of young (and not so young!) Parisians will hit the banks of the canals with their bottles of wine, baguettes, and saucisson.  As the sun sets quite late, this is an activity that can last for hours, with people coming and going.  It is, however, advisable to arrive earlier rather than later as the more popular spots become crowded very quickly.

Meaning: I’m going to organize a picnic at the Buttes-Chaumont park.

Another great thing to do in Paris in the summertime is picnic in one of the many parks.  Many have later hours during the summertime, and will stay open until the sun goes down.  Like the quays, the parks will fill up with Parisians looking to enjoy their apéro under the sun. Knowing some important summertime vocabulary will take you a long way while out enjoying the parks.

And after the bar, Seine, or the park it’s time for the boîte de nuit, or nightclub, or discothèque.  In France, these usually are open much later than bars, which close at 2 am.  The nightclubs won’t start to fill up until after midnight, and can stay open until 6 am or later.  This seems late, but, especially in Paris, many hard-core partygoers will stay out until the first metro starts running at 5:30 am.

Meaning: I got hit on by the bouncer!

Meaning: I’m going out for a cigarette.

Une clope is slang for a cigarette. Don’t forget, learning key slang words is the best way to sound more natural in your new language. Unless there is a fumoir (smoking room)to enjoy one, you’ll have to go outside of the bar or club.  But you’ll have lots of company!  An easy way to strike up a conversation is to ask for a light: “Vous avez du feu ?” (Literally – do you have fire?)

Meaning: I don’t want to get too drunk.

Meaning: He likes drinking a little too much!

Meaning: No, he just likes to party!

Meaning: There’s a big party at my friend’s house.

Teuf is the verlan (French slang that features the inversion of syllables) for fête, or party.

Meaning: Is there is an after-party?

For when the night’s still young and you’re still ready to go! 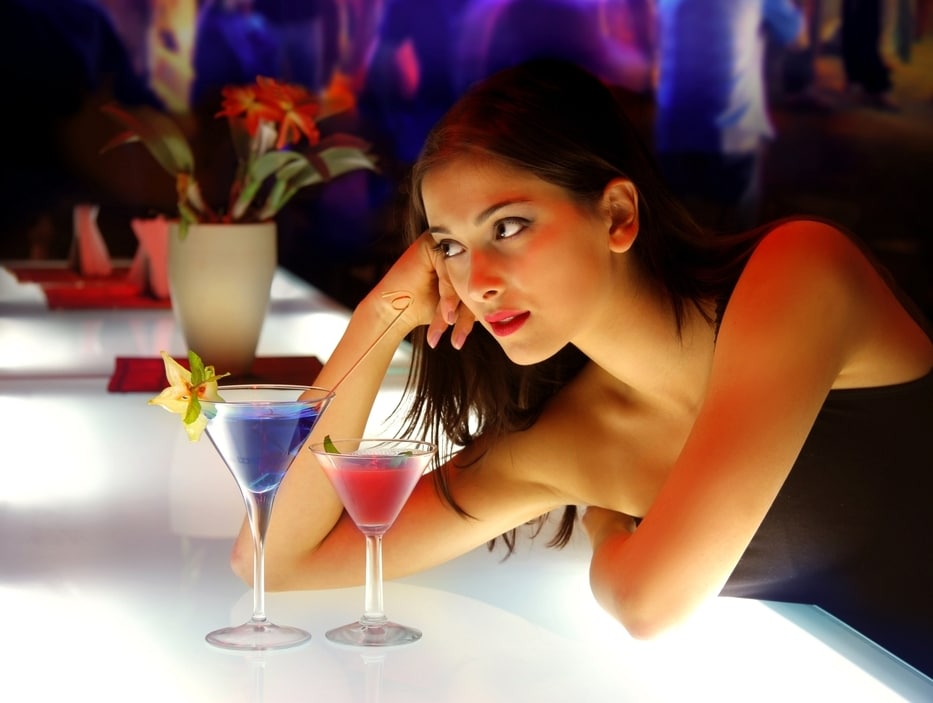 The end of the night

If you feel like going home and your friends want to keep going, make sure to wish them a good time!

Sometimes your friends need to be convinced to let you leave.  Make sure you have a good excuse ready:

Meaning: I have to be reasonable, I’m working tomorrow!

A good reason to end your night early. Don’t fall for temptation!

In Paris, there are usually taxi stations near the metro or bus stops.  You can also flag them down.  There are also night buses that run until the metro starts.

Meaning: We’re going to wait for the metro! 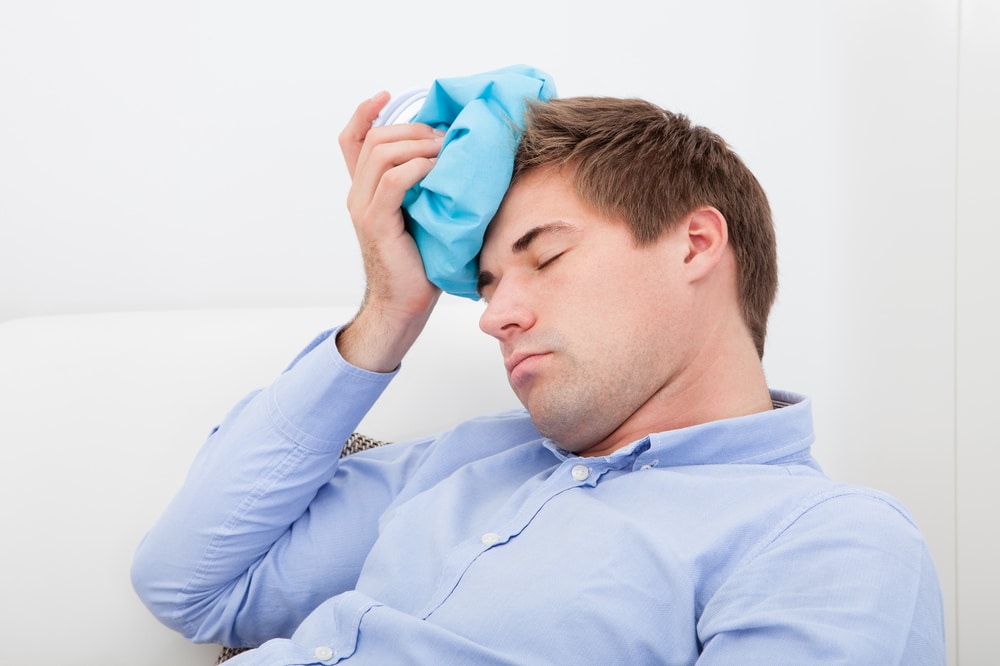 An unpleasant experience that does not escape the French, being hungover is to literally have a “wooden mouth”.  You can also say that you have a headache.  J’ai mal à la tête.

Meaning: How are you?  Wasn’t too hard this morning?

It’s always nice to have a friend check on the state of your hangover.

Meaning: We had a great time last night!  Let’s do it again very soon!

With the right company and right setting, you can make a habit out of these nighttime outings!

And there you go!  You’re ready to let loose, French-style.  Using French in the setting of a bar or club is a great test of comfort with the language, as there is the music, slang, and the way people talk while out to contend with.

But don’t just review these phrases as part of a list: use them actively and see them used by real native speakers. This way, you can ensure that you’ll know when to use them properly in real-life conversations.

You can practice by checking out authentic French media, since they’re highly likely to contain such phrases. French TV shows, podcasts, music and movies are all good choices and easy to access online.

For a more learner-tailored approach, there are immersion-based language learning programs that can teach everyday French in context. One such resource is FluentU, which uses short authentic French videos equipped with interactive subtitles that explain the vocabulary used, including slang and expressions. These words can then be practiced with the program’s flashcards and quizzes.

With constant review, you can use these phrases with confidence and really participate in the fun and excitement of French nightlife!

So, start now! There’s no better (or more fun!) way to get to French fluency.