Here’s an easy trivia question: How many fingers do you have on your left hand?

That’s how many ways there are to say “you” in Spanish!

You can say tú, usted, ustedes, vos or vosotros.

And they all mean the same thing: You!

So what’s the difference? What’s the point of having five different ways to say the same thing?

Ah, that’s the catch: All those words might mean “you,” but they’re all slightly different. Which pronoun you use depends entirely on the situation.

In this post, we’ll take a closer look into every way to say “you” in Spanish, and we’ll learn when to properly use each one.

How to Determine Which Spanish Form of “You” to Use

The idea of multiple ways to say “you” might be a strange concept for English-speakers. After all, we only have the one lonely “you,” which we use for, well, basically everything. So a class about how to say “you” in English would be pretty short: It’s “you.” Next lesson!

But in Spanish, there are five words that mean “you,” and the differences between them aren’t minor. Each word has a specific function in the language, and they’re often not interchangeable. Which form you use depends on:

So when choosing which “you” to use, you’ll have to keep in mind whether you’re talking to one person or to many, whether you’re in Spain, Mexico or some other Spanish-speaking country and whether you’re addressing friends, acquaintances or people of a higher social status than you.

The first two are fairly straightforward, but the last one seems to have a lot of wiggle room. How do you know if a situation is formal or informal? Here are some guidelines to help you decide:

If you’re having difficulty determining the most appropriate word to use, err on the side of caution and use the more formal version.

Still not sure? Try the “High-Five Test.” It’s a quick imagination exercise which helps determine whether the situation is formal or not. Look into your mind’s eye and imagine giving the other person a high five, out of nowhere. Just put it there and slap that hand.

How did that feel in your head? Did the other person even meet your palm? Or did he think you were going to strike him and protected himself instead?

Did it feel weird? Or totally normal?

If you can imagine high-fiving the other person without the least bit of awkwardness, then you can talk to them informally. If not, then it’s probably best to address them formally.

Two Important Things to Remember About “You” in Spanish

Zeroing in on the correct “you” form is crucial to being understood and not offending anyone. Here are two more really important facts to remember about these pronouns:

Different forms of “you” have different verb conjugations.

For example, the common expression “Have a nice day!” will be different depending on whether you’re using tú (informal) or usted (formal):

They both mean the same thing, but the accompanying verb forms depend on which “you” is being used in the sentence.

(Note: For discussion purposes, notice that we don’t drop the “you.” Many Spanish speakers often simply drop the pronoun altogether. So instead of saying, “Tú tienes suerte” [You are lucky], they simply say, “Tienes suerte,” which means the same thing.)

We all know that verb conjugation is a rich field, and luckily, there are plenty of available resources online for learning the ins and outs of it:

The “you” forms change depending on their function in the sentence.

Remember when I said earlier that there are five “you” forms in Spanish? Well, that’s the case when “you” is the subject of a sentence.

But as a pronoun, “you” can be placed at different points in a sentence and can function as a direct object, indirect object, the object of a preposition, etc. It’s pretty versatile!

You (subject) are beautiful.

In Spanish, though, each of these situations calls for a specific form of the “you.”

Let’s take tú for example. It changes into te when it’s used as an indirect or direct object and into ti when used as an object of the preposition:

Este flor es para ti. (This flower is for you.)

So the tú is actually a shapeshifter and changes depending on its function in the sentence. And this goes for the other four forms as well—usted, ustedes, vos, vosotros.

IPFW has a great chart to help you see what these change into when they take on different functions in a sentence. This is just something you need to remember, so study that chart!

That said, let’s look into each of the five forms of “you” in Spanish and learn when to properly unleash them.

Tú is used when you’re referring to a single person and they’re somebody you’re familiar with—a friend, a family member, a colleague, somebody younger than you or someone your own age.

If the other person’s seen you finish off a plate of spaghetti with your face, or if you’re talking to your cousin who borrowed and never returned your “Back to the Future” DVDs, you can safely refer to them as tú.

You can also use tú with pets, like when you say, “Tú eres mi vida” (You are my life) to your clueless cat.

Tú is warm and engaging. It’s universally recognized in the Spanish-speaking world: Wherever you are, you can use it when talking to an individual you’re close with.

Usted is singular, like tú, which means it’s used when you’re talking to just one person. The difference is that usted is more formal than tú.

Use usted as a sign of deference to people of a higher social status than you—your boss, elder members of your family, a government official, a teacher or a doctor (in other words, any person you respect and/or really wouldn’t want to upset).

Usted is a fusion of the old phrase “vuestra merced,” which was used to address superiors in the 15th and 16th centuries. It means “your mercy” or “your grace.”

Usted can be used and is understood in most of the Spanish-speaking world.

Remember when I said to always err on the side of politeness? When you’re initially meeting a person, use usted. Say:

¿Cómo se llama usted? (What is your name?)

It’s better to start with usted than to assume familiarity and later have to walk back your tú.

If the other person thinks you’re being too formal, he’ll let you know by saying “Puedes tutearme,” which means you can use the tú form with them. It’s like your boss telling you, “Just call me John” after you’ve been “Mr. Smith-ing” his ears off.

Here’s where things get fun. In some regions, instead of differentiating between tú and usted, speakers simply use vos when addressing an individual. Vos used to only replace tú but it’s increasingly becoming accepted as a replacement for usted as well.

Voseo, or the use of vos, is used mainly in Latin America, in countries like Argentina, Paraguay, Uruguay and some parts of Chile and Central America.

One glaring exception for using vos is Spain, which doesn’t use the form. They think they’re too cool for it. (Kidding!) 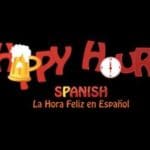 Happy Hour Spanish has a map of countries in South America that employ vos. But honestly, the geographic distribution isn’t at all that tidy. It’s very difficult to pinpoint exactly which places use it because even in a single country, a region may be using vos and just a few miles north, up the mountain or down the valley, you might hear tú in conversation instead.

Vosotros is used to informally address a group of people. It’s the “you” in plural form, like the “y’all” of a Texan drawl.

He preparado un pastel para vosotros. (I have baked a cake for you all.)

Spain may not use vos, but it definitely uses vosotros. This time, it’s practically the only country that uses it.

Remember that although the different Spanish-speaking countries basically understand each other, it’s important to know beforehand which type of Spanish you specifically want to learn.

There are differences between dialects, regions and countries. So think of the people you’ll likely be conversing with in the future. Will they be from Spain, Mexico or South America? Plan your studies accordingly.

You can get an online tutor from the area, for example. You’ll not only learn the nuances from the region, you’ll also learn the most appropriate idioms, slang and insights into the culture.

In Spain, they use vosotros for informal situations and ustedes for more formal ones. But because Latin American countries don’t use vosotros, they just say ustedes for both formal and informal interactions with groups of people.

Ustedes is for when you’re addressing two or more people, as in:

¿Quieren ustedes ir a la playa? (Do you guys want to go to the beach?)

Which, in landlocked countries like Paraguay and Bolivia, is akin to asking, “Do you want to go abroad?” It all just goes to show you: Context is everything!

Now you know five different ways to say “you” in Spanish! The Spanish language is rich like that. But don’t worry if it takes time to get the hang of the nuances. With practice, you’ll eventually get there.

Best of luck to you!