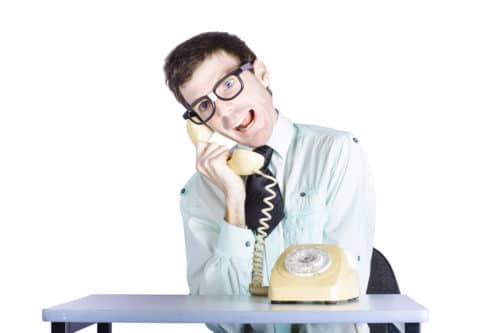 You don’t want to phone in learning Spanish.

But you do probably need a little phone (vocab) in your Spanish learning.

After all, you never know when you’ll need to make or receive a phone call in Spanish.

While phone conversations are common, many Spanish learners overlook this important skill or assume that general conversation practice will prepare them.

However, there are many phrases that are specific to phone calls that you might not use in general conversation.

If you’re not prepared, speaking on the phone in Spanish can be a daunting task. You won’t have visual cues to help you along, and you need to make sure you avoid common mistakes.

That’s why you need to prepare ahead of time. Doing so can give you all the polite phrases you need to hold a successful phone conversation.

This guide will help you prepare to hold a basic phone conversation in Spanish.

Why Learn How to Hold a Phone Conversation in Spanish?

One powerful reason to learn to hold a phone conversation in Spanish is to prepare for business calls. Even if you don’t expect to take Spanish-language phone calls for work, Spanish is very widely spoken, and you never know when you may need these skills. Being able to take a business call in Spanish will show respect for whoever you’re speaking with. Plus, it will probably impress your boss.

Additionally, knowing how to hold a phone conversation in Spanish will help you cultivate and maintain friendships. Let’s face it: most people are more confident speaking their native language. Even if your Spanish-speaking friends also speak English, being able to talk on the phone with them in Spanish will only strengthen your bond.

Finally, learning to hold a phone conversation in Spanish will allow you to call businesses to acquire information. If you’re ever in a Spanish-speaking country, chances are you’ll need to call a business at some point—maybe for dining reservations, hours of operation or to make a request. You can’t always count on businesses having someone on staff who speaks English, so being able to hold the conversation in Spanish is essential to you getting the information you need.

How to Practice for a Spanish Phone Conversation

YouTube is a good source for telephone dialogues and similar tools. For instance, Calico Spanish Songs for Kids offers a song about answering the telephone. LCF Clubs/Babelzone has another song on telephone conversations. Both songs teach common vocabulary and phrases you might use on phone. Plus, the songs are catchy, making them easy to memorize. This will allow you to always remember the words simply by playing through the songs in your head.

For a dialogue, you might try 123dialogues, which offers a useful mock telephone conversation.

You can also take it one step further by using FluentU to study up on your conversation skills. FluentU takes real-world videos, like music videos, commercials, news and inspiring talks, and turns them into Spanish learning experiences.

Hola (“hello”) is a common greeting in person or on the phone. However, on the phone, it’s often inflected as a question rather than a statement. It’s the most common and widely understood Spanish greeting, so it’s a good choice for any phone conversation.

¿Aló? (“hello?”) is a common phone greeting used in Latin America. It’s very similar to hola, but is used primarily on the phone rather than in person. It’s also less formal.

This is a more formal greeting.

For instance, if you call a restaurant to make a reservation, it might play out like this:

Bueno usually means “good.” However, in Mexico, it can also be used as a telephone greeting that means the equivalent of “yes?” or “hello?” Internet lore suggests that this emerged in the late 1800s as a way of confirming a telephone had connected, but the exact history is unclear. It can be used formally or informally.

Dígame (“tell me”) or diga (“say it”) may sound a little aggressive in English, but they’re common telephone greetings in Spanish when you answer a call that you’ve received. They can be used formally or informally.

¿Cómo estás? is the informal for “how are you?” The more formal option is ¿Cómo está usted? You can use it as an informal way to say “hi,” or save it for a little later in the conversation once you’ve greeted the person and introduced yourself.

¿Podría hablar con…? means “Could I speak with…?” Just fill in the ellipsis (“…”) with the name of the person with whom you want to speak.

This means “Could you pass me to…?” It’s very much like saying “May I speak with…?”

Fill in a name in place of the ellipsis (“…”), and you’ve just asked if that person is there.

¿De parte de quién? means “From whom?” However, it’s used like “Who is calling?” ¿De parte? is also used as an abbreviation of this question.

Se ha equivocado means “you are mistaken.” It’s used if someone mistakenly calls your number. It uses the formal tense in order to be polite to the caller.

15. Me he equivocado de número

This means “I have mistaken the number,” but it’s used like “I have the wrong number.”

“Can I leave a message?”

17. Lo siento, pero no me interesa

This means “sorry, I’m not interested.” Given the proliferation of scams and sales calls, this is a helpful phrase to learn in as many languages as possible.

“Thank you for calling.”

Now, you’ll never have to put a Spanish phone conversation on hold!

The Nifty, Slightly Nutty Guide to Spanish Mnemonics
Spice Up Your Daily Routine with Some Simple Spanish Tweaks