Are you looking for movies you’ll never, ever forget?

Then don’t blink now because this post contains 10 of the most terrifying Spanish horror movies to have graced the silver screen.

They’ll get your heart and your brain racing with their visuals and plot twists.

So grab some popcorn and a wooden stake and hold on tight to your movie-watching partner because this post may get spooky!

Guillermo del Toro’s “El espinazo del diablo” is set in 1939, as the Spanish Civil War is coming to an end.

The boy Carlos is sent to an orphanage in the middle of nowhere. What’s unusual is that he hears a voice which says, “Many of you will die.” Carlos soon learns that the voice is of a small boy, Santi—a ghost with a story to tell.

If you’re wondering what “el espinazo del diablo” refers to, it’s a drink from the liquid used to preserve dead fetuses, and it’s believed to cure all sorts of ailments. And in the movie you get to see a man of science drink it.

Crafted by the master storyteller-director Guillem Morales, this 2010 offering is so full of twists, turns, betrayal and discovery that your head will still be spinning days after watching it.

Julia’s blind twin sister Sara has just died, ostensibly by suicide. Julia, who has a degenerative eye disease, suspects that there’s more to her twin sister’s death than meets the eye. She decides to discover who or what really murdered her twin.

Her worsening condition doesn’t help her cause and she’s left with poor vision and a feeling that someone—a sinister presence lurking in the shadows—is out to make her suffer the same fate as her sister.

Imagine being in an apartment complex full of zombies. You’re part of a documentary crew that’s trapped inside, recording the whole thing—and trying to stay alive in the process.

A reporter-cameraman pair, hoping to document what a group of firefighters does during the evening shift, follows them on a dispatch. The call is regarding a Mrs. Izquierdo, who’s trapped in her apartment, screaming.

Lo and behold, you find yourself ascending into an enclosed zombie epidemic. The building’s residents are fearful and normal one minute, but become aggressively rabid the next.

The real question is: Will you survive the night?

Where to watch: Amazon Prime | iTunes

If gore and great storytelling are your regular fare, then you’ll fit right in here.

Angela is a university student working on a thesis about audiovisual violence. She finds a snuff film featuring a girl who disappeared two years earlier, and she tries to figure out who videotaped the murder.

As Angela gets deeper into her thesis, she also establishes the real possibility that she could very well end up starring in her own snuff film and end up dead. Now everybody is a suspect.

This winner of seven 1996 Goya Awards, including the awards for Best Film, Best Original Screenplay and Best Director, will take you on a rollercoaster of a ride.

A bungled burglary leads to the murder of a woman while her daughter looks on.

Twenty years later, the criminal, going by another name and now working in a bar, sees the girl again. The poor girl is suffering from a developmental disability. Her blank stare sends cold chills down the murderer’s spine.

Does she recognize him? Will she turn him in?

The disturbed killer, getting desperate, badly wants to cover his tracks and tie up some loose ends. He plots to finish the job he should have done many years ago. Will he be able to finally do it? Check out the movie and find out.

A couple loses their beloved teenage son and daughter to the hills and caves of Tijuana, Mexico. Thankfully, the kids are found alive and well the next day.

They start to display very strange, antisocial and malevolent behavior upon their return—as if they’re possessed. This prompts the couple to suspect that something deeply sinister must have happened on the night they were gone, and they believe some evil spirit might be causing this disturbing behavior. Seeking answers, they hear stories about the dark legends of the area and caves the children were lost in.

The mother finds herself in a cave, where she finds…all the answers to her questions.

Where to watch: Amazon Prime | iTunes

“El día de la bestia” is a healthy mix of action, comedy and terror. It’s the story of a priest who deciphers the exact date of birth of the Antichrist.

Wanting to stop the evil reign before it’s too late, the priest teams up with an occult expert and a fanatic of black metal music. Their absurd plan is to commit as many sins as possible in order to gain entry into the Devil’s inner circle and be around when the Antichrist is born.

And that’s why in the opening scene, you’ll see a priest walking down the street, punching people, shoving helpless strangers, shoplifting and committing a series of other awful sins.

Imagine being under house arrest inside a haunted house. Imagine living out your days in the house where your husband was murdered and your son vanished into thin air—and you’re the one who’s been convicted of those crimes.

This movie happens in two timelines: one in 1981 and another in 2011. When the clock strikes 11:11:11 on November 11, 2011, the house is transported back 30 years to 1981. Dulce, the main character, sees things that make her understand all the tragedy, horrors and strange events from 30 years before.

This movie, which was distributed all over the world, has been well received by audiences and is one of the highest-grossing Venezuelan pictures.

Where to watch: Amazon (DVD)

A six-year-old girl’s heavily mutilated body is hoisted out of a deep cistern.

Five years later, her mother suddenly receives a phone call where she hears a familiar voice: it’s her daughter! Or at least the voice claims she is. She says she only wanted everybody to believe she was dead, and now she’s asking her mother to come and get her.

And so begins a mother’s epic struggle to get her daughter back from the clutches of whatever it is that has her. “Los sin nombre” (The Nameless) is the name of the cult that has worked behind the scenes of history to commit humanity’s most horrendous acts.

Laura goes back to the old orphanage where she grew up. Together with her husband and adopted son Simon, they’re going to reopen it for disabled children.

It doesn’t take long before Simon starts talking about seeing Tomás, a boy his age who wears an old sack for a mask. Simon claims he talks with Tomas, an orphan who has warned him that he’s about to die!

On the opening day of the orphanage, after a little argument, Simon runs and hides from Laura. Where’s Simon? Is he still alive? You’ll have to watch the film and brace yourself for more shocking revelations.

How to Learn Spanish with Horror Movies

If you’re a Spanish learner, then Spanish horror movies can be a great way to deepen your knowledge of the language: 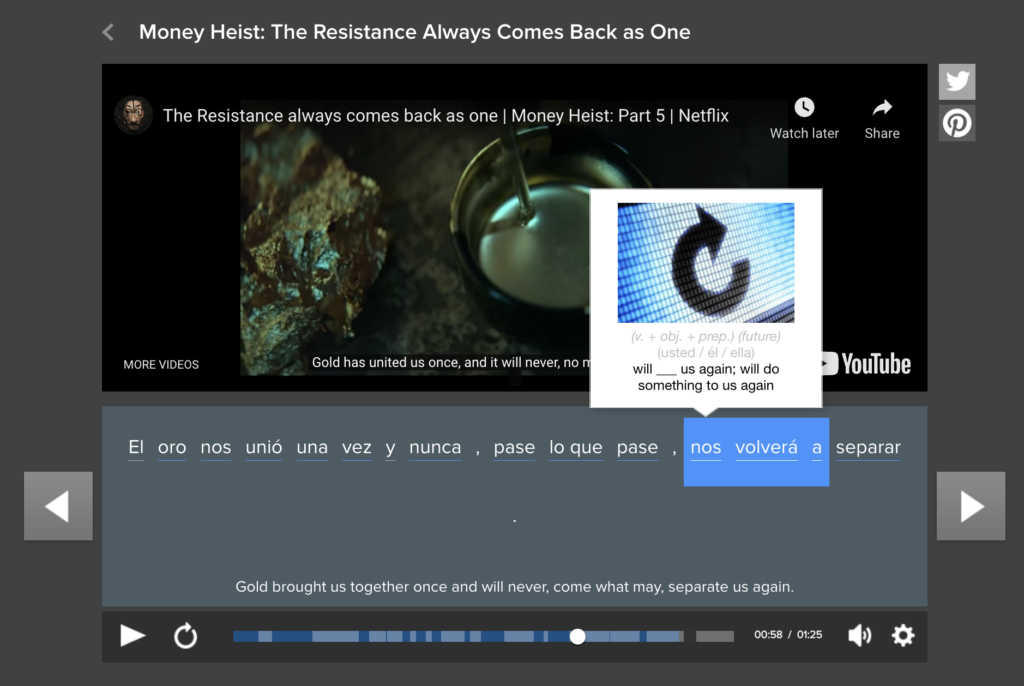 Why Are Spanish Horror Movies Great for Language Learning?

It might seem like horror movies are more popular than ever these days, but Spanish filmmakers have been scaring the world for quite some time.

The ’60s and ’70s, considered a “golden age” of Spanish horror cinema, produced movies like “El gran amor del conde Drácula” (“Count Dracula’s Great Love”) and “¿Quién puede matar a un niño?” (“Who Can Kill A Child?”). These and other movies coincided with the end of General Franco’s dictatorship, which had severely controlled such content.

Today, that tradition of psychological thrillers, bloodlust and scare-the-pants-off-of-you filmmaking is continued by the likes of Guillermo del Toro, Juan Antonio Bayona and Jaume Balagueró.

Spanish language learners can put all this overflowing gore to good use as language learning tools. The movies will keep you up at night anyway, so you might as well put those sleepless nights to good use and improve your Spanish!

Here are three reasons why:

1. They have a compelling storyline.

One great thing about a horror or thriller movie is that you never know what’s going to happen next. Yeah, we know somebody is probably going to die, or somebody is definitely hiding behind the door or somebody is rearranging some furniture in the middle of the night, but we’re not really sure.

Instead, horror movies play on our primal fears, our deepest and darkest thoughts. By tackling the taboo, by skirting the commonalities between fantasy and reality, the horror genre has a way of imprinting movie sequences inside our minds.

Horror movies are supposed to pull the rug out from underneath us. They can purposely lead us to some erroneous conclusions in the first 117 minutes of the film, then introduce some fundamental twist that turns the whole movie on its head. Sometimes, it’s even a double or triple twist that takes us for a loop:

The woman was actually not her mother!

That guy was dead this whole time?!

The ghost was actually helping her!

Oh, so that’s why she killed them!

Intense scenes, coupled with unique and unforgettable plot twists, combine to make horror movies more memorable in terms of both story and language itself, making them particularly useful for learners.

2. They feature repetition and rhythm.

In spite of them being highly unpredictable, on some level, horror movies also follow a formula. So you’ll often see scenes that are reminiscent of what you saw earlier. For example, a character might have a modus operandi when killing, or there might be a repetition of what happens today and what happened exactly 666 years ago.

Or you might hear the killer blurt out the same lines over and over every time he stabs someone.

For example, in the movie “Final Destination,” you see Death work in a very similar way, creatively using everyday objects and a confluence of seemingly freak events to snatch his subjects from the world of the living.

3. They often have very vivid scenes.

Movies have many other things going on for language learners.

The plot provides context for the language so you can actually see for yourself how it’s used in dialogues and scenes. Movies are language in action, and if anything, horror movies do this contextualizing function a notch above other genres. They hit your senses stronger, embedding themselves deeper in your memory.

You might forget everything about a boy-meets-girl flick, but you’ll never forget how a deranged daughter says, “Sabroso…” (yummy) while she’s naked and feasting on the raw, bloody insides of her own pet dog. Perhaps it’s an unconventional way to learn new vocabulary, but at least it’s effective.

Good horror films make you feel immersed in the story, and these 10 Spanish horror movies will chill your spine and activate your brain.

In fact, some of these movies are so freaky, they might just scare your pantalones off. If you’re a horror movie fan, though, I’m willing to bet that’s what you’re aiming for!