Are you getting bored of studying Spanish?

Are you game for trying something new?

Spanish board games offer all the fun and excitement of your favorite board games, but as an added bonus, you’ll also get the biggest win of all: improving your Spanish skills!

With a diverse array of board games appropriate for any skill level, you’ll never struggle to find an entertaining and educational game to enjoy.

Why Play Spanish Board Games?

One great reason to play Spanish board games is that board games are interactive. Practicing Spanish in groups is motivating. After all, it’s so much more social than sitting alone with a book. Plus, the interactive aspect of board games helps you practice your conversation skills.

But that’s not all! Board games are also fun. They’re designed to be recreational, so they’ll hold your attention much longer than conventional studying.

What’s more, playing board games never feels like studying. It feels more like joking around. Since it doesn’t feel like studying, you can intersperse board game sessions to break up your regular studying. You’ll still practice your Spanish, but you’ll also reduce your studying fatigue.

Finally, board games will help you see the Spanish language in a new context. To become fluent in Spanish, it helps to use it in a diverse array of contexts. For instance, if you only ever see Spanish in books, using your skills in other contexts will be challenging. If you use your skills in a wide variety of contexts (like board games), you’ll have an easier time adapting to any context in which you might find yourself.

You’ll Never Get Bored of These 8 Spanish Board Games 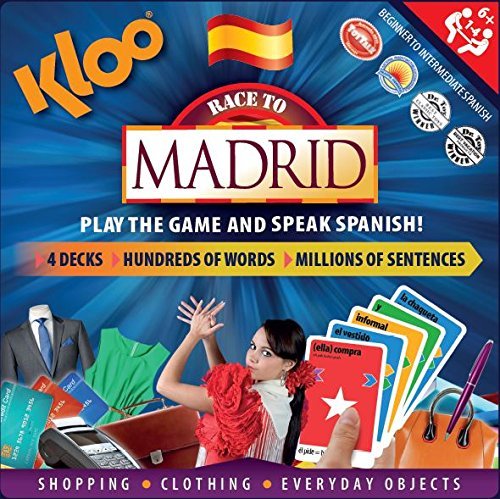 This award-winning board game was designed to help you learn Spanish.

The game takes the form of a race through Spain. You’ll go through major Spanish cities like Barcelona, Seville and Valencia on your way to your final destination, Madrid. To advance on your journey, you must use your playing cards to form sentences. If you form longer sentences, you’ll move more quickly. There are four different decks of cards with themes like “Eating & Drinking” to help you learn specific and useful vocabulary sets.

KLOO’s Learn to Speak Spanish Language Board Game – Race to Madrid is appropriate for beginning through intermediate Spanish students. It’s a helpful tool to learn vocabulary and sentence construction, but you’ll also learn a little bit about Spanish cities and landmarks. 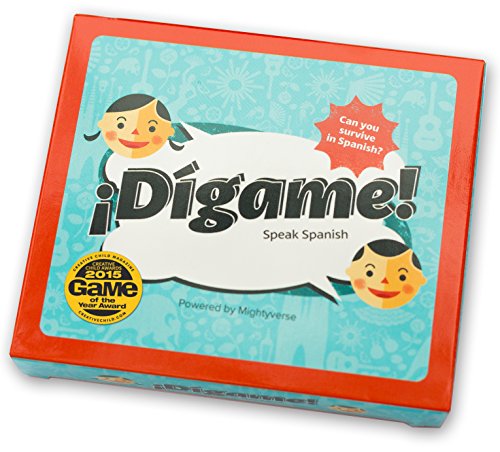 While ¡Dígame! (Tell me!) Spanish Learning Card Game is technically a card game and not a board game, it’s a worthwhile option for any game fan. This award-winning game aims to immerse you in the Spanish language.

To win the game, you have to learn words and put the cards in the “Entiendo” (I understand) pile. To do this, you must be able to recognize the phrase based on a demonstration (sort of like charades) or Spanish-language hints, which you can access on your phone or online. 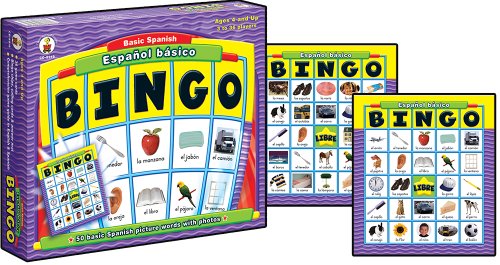 The game works a lot like regular bingo. A caller draws a card and calls out the word on the card. Then, players look to see if that word (accompanied by an associated image) appears on their cards. If so, they mark it with a chip. Once a player has a line of chips, they win. This is an easy way to learn basic vocabulary through repeated exposure.

This Spanish version of the popular game Spot It! has been discontinued, but you can still check Amazon for availability.

Spot It! Basic Spanish is comprised of a set of playing cards with several words and images on each card. Every player is dealt a hand. Then, each player takes his/her turn putting down a card. Each subsequent player must play a card that has some “match” with the card before it—this can be matching a word to an associated image, matching images or matching words.

Spot It! Basic Spanish is good for beginning Spanish students and will help players learn basic Spanish words and connect them to their actual meaning rather than their English translations, which is important for increased fluency. 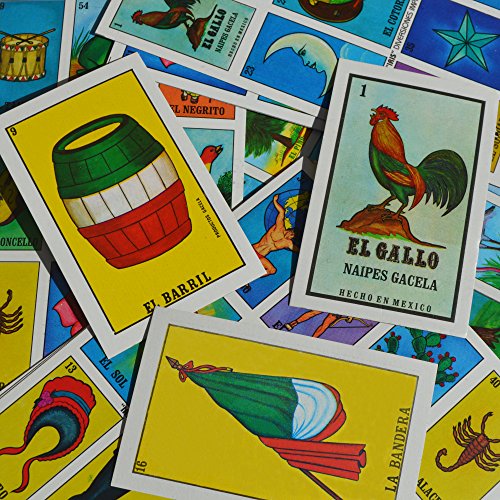 Lotería Mexicana (Mexican Lottery) Set of 20 Boards and Cards can accommodate up to 20 players at once.

The game of lotería (lottery) is very similar to bingo. Each player gets a board with pictures on it. When the caller draws a card from the deck, he/she traditionally reads a riddle or improvises a description. When a player matches a word, he/she puts a chip on it until he/she gets four chips in a row. 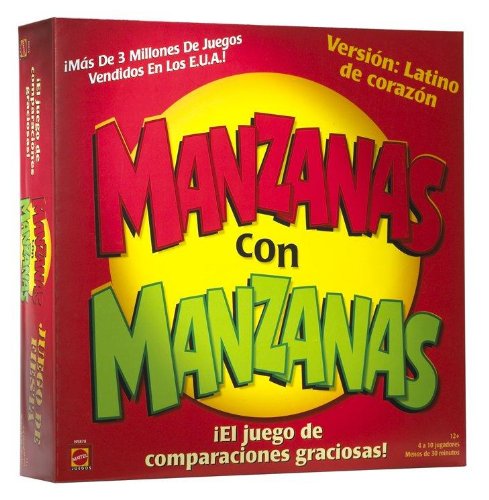 Manzanas con Manzanas (Apples with Apples) is the Spanish-language version of the popular game Apples to Apples. While it’s a little pricier than the other games on this list, it’s a great option for intermediate and advanced Spanish students.

Each player is dealt a hand. Then a “judge” plays a card, and each player plays a card that seems to be described by the judge’s card. The judge chooses his/her favorite, and the person whose card was chosen wins that hand. Then, the judge rotates.

Since Manzanas con Manzanas uses more reasoning skills than many games, this is a good way to engage multiple areas of your brain simultaneously. Reasoning in Spanish will drastically improve your fluency and ability to think in Spanish.

Note: This set does focus predominantly on Mexican Spanish, so not all words and phrases will be applicable to other regions. However, you can remove overly specific cards to make the set more general. 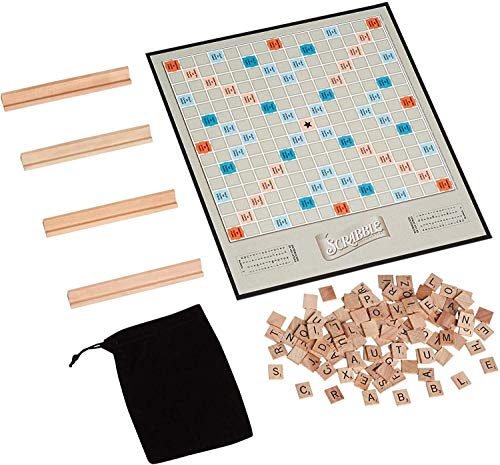 Get your favorite dictionary app handy! You can take home the Spanish version of the familiar classic, Scrabble.

In Scrabble, you use tiles to form words on a game board. Each letter has a value, and certain squares on the board have bonuses. Whoever scores the most points wins.

Playing Scrabble in Spanish is terrific for all levels of language learners. Beginning students can form simple words. Scrabble Spanish is also a helpful way to familiarize yourself with the Spanish alphabet. More advanced students can use a wider array of words (and score more points). Regardless of your level, it’s a great way to practice your spelling and word recognition.

Pro tip: If you’re playing Scrabble Spanish and having trouble coming up with words, cognates are your friends. 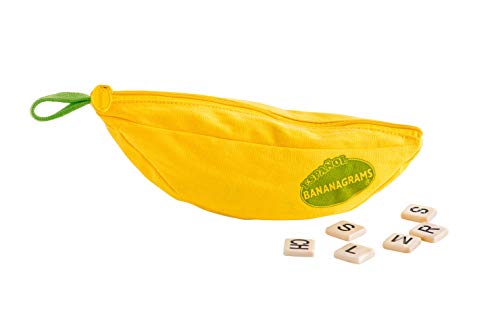 You can get the Spanish version of the popular game Bananagrams.

In Bananagrams, players attempt to spell words quickly by building on words that are already in place. It’s a lot like Scrabble, but there’s no board and no complicated scoring—just spell, and spell quickly!

Bananagrams is appropriate for all levels of learners and will help players practice their spelling.

With Spanish board games in your learning arsenal, you’ll never get bored of learning Spanish again!