If you enjoy getting lost in the wonderful world of animated cinema, you’ll find plenty to enjoy in the Spanish animated movies below!

From adventure movies that’ll bring out the kid in you to more serious films for adults, these 10 Spanish animated movies all have interesting themes and unique storytelling.

They come from different Spanish-speaking countries, including Cuba, Uruguay and Spain, so you’ll see a wide variety of styles (and accents).

Read on to dive into some fun movies!

“Arrugas” is directed by Ignacio Ferreras. This critically-acclaimed and award-winning film tells the story of elderly residents of a nursing home. To help their friend, they concoct a wild plan that breaks them out of the monotony of their day-to-day lives.

Adventure! A search for a lost city! Peru! Enticed yet?

Well, then it’s time to check out “Las aventuras de Tadeo Jones,” directed by Enrique Gato. Follow Ted, the construction worker who wants nothing more than to be an archaeologist, as he finally gets to live his dream!

Okay, okay, this film may not live up to the expectations of modern-day animation. However, Juan Padrón‘s animated flick is still entertaining and pretty much considered a classic!

If you’re into vampires (like 90% of the population these days), you’ll definitely want to check this movie out. The vampires can now step out of the shadows thanks to a potion that allows them to survive the formerly deadly sun. When vampires worldwide find out, they travel to Cuba and the American and the East European vampires engage in a battle for the potion.

An animated production from director Samuel Ortí Martí, “Pos eso” follows the life events of Trini, a world-renowned Flamenco dancer. Don’t be fooled into thinking it’s a cheerful, happy-go-lucky film by the fact that it’s animated.

As a matter of fact, even the trailer above might be a bit disturbing for younger folks.

It can get downright creepy and terrifying. The proof is in the trailer and the description on the movie’s original website calling “Pos eso” a “comedy of Satanic action.” That being said, it’s a wonderful quality of creepy. It was even featured in the Atlanta Film Festival.

The plot of this film is relatively simple: it follows a boy named Amadeo during an adventure with the players of his Foosball game. “Metegol,” directed by Juan José Campanella, quickly gained global popularity and critical acclaim.

Did a teacher ever punish you in a bizarre way for acting out in school? If so, it was probably nothing in comparison to the punishment doled out by Anina’s teacher in the film “Anina.“ I want to keep you in suspense, so that’s all I will say.

fAlfredo Soderguit won best director for this movie. Not only is the story itself unique, but also the style of animation.

This animated film tells the story of Mexico’s War of Independence from the perspective of three different people.

It was directed by Carlos Kuri and released in 2010. The Spanish spoken in Mexico has many unique elements to learn, and it’s easy to hear them shine through the language in this film. It’s also a great way to learn about the history of the country.

Wilbur from “Charlotte’s Web” didn’t want to be bacon. The chickens in “Chicken Run” didn’t want to be somebody’s dinner. And Toto the egg from “Una pelicula de huevos” has no desire to become an omelet, so he decides to embark on a journey to fast-track becoming a chicken (he probably doesn’t realize that it causes pretty much the same problem).

This film was directed by Gabriel Riva Palacio Alatriste, and it’s one of the most commercially successful Mexican films ever.

Have you ever thought that perhaps your life would be dramatically different if you didn’t look the way you do?

Well, 46-year-old Antionio Farfan, the main character in “Gordo, calvo y bajito” has! He feels that his appearance is to blame for his mundane notary job, until a fatter, balder and shorter man takes his job and is loved by all. He then embarks on a journey facing his fears.

This Colombian film was directed by Carlos Osuna. The unique animation is far from the CGI we’re accustomed to in American movies.

This flick is ideal for those of you wanting to learn about Argentinian history and culture. This animated film focuses on Martín Fierro, a rebel fighting for freedom against the corruption and power of his government.

It’s based on what’s arguably one of the most important books in Argentine literature, “El Gaucho Martín Fierro.”

How to Learn Spanish with Animated Movies

If you’re a Spanish learner, simply sitting on the couch with your eyes and ears glued to a Spanish-language movie is helpful, but there are ways to interact with the film and boost the learning benefits even further.

Below we’ve got a short list with more ideas for you to explore while immersing yourself in brilliant animation. Of course, this is far from a complete list of ways in which you can get involved while screening movies, but it’s a start! 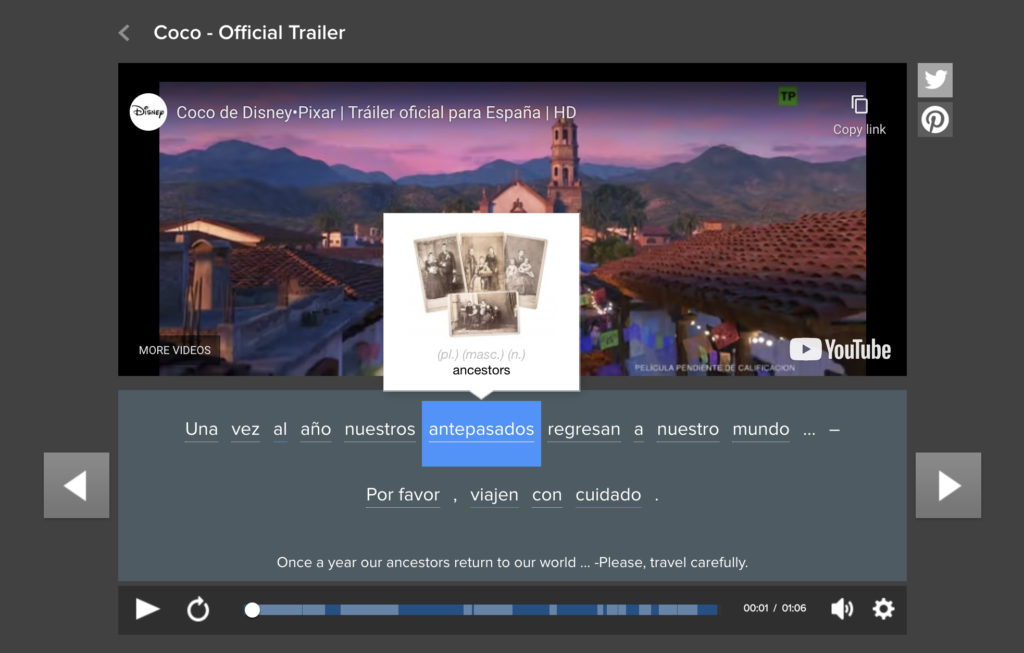 Love those options? Then have at ’em! They’re an immersive, colorful way to kick your learning up a notch.

Perhaps after viewing these films, you’ll even start to consider the animation you watched in the past completely overrated and find a brand new favorite.