What if I told you that you knew a lot of Spanish, but that you just were not aware of it?

Every language is a system, and by learning each part you can create sentences, which enables you to communicate with others who know the same system.

While Spanish as a whole can look completely foreign at first glance, it is actually very similar to the English system.

Understanding the similarities between English and Spanish gives a major boost to learning and makes Spanish easier to remember!

How and Why Are They So Similar?

While Spanish is a Romance language and English is Germanic, a portion of the English language was influenced by Romance sources and vice-versa.

Many centuries ago, as these languages were still fairly new, they began to merge as the Germanic and Roman people increased communication.

Because of this, there are still quite a few similarities between modern Spanish and modern English today, and according to the Foreign Service Institute, Spanish is one of the most closely related languages to English.

Much of the grammar, vocabulary and structure are the same, meaning that you picked a great second language to learn!

To get a better idea of how to apply this to your language learning, here are six of the most valuable similarities between Spanish and English that will help get you speaking and writing in no time!

The Key Similarities Between Spanish and English

Not having to learn an entirely new set of symbols and sounds is always a relief.

Spanish and English use mostly all of the same letters, which makes the Spanish alphabet one of the easiest to learn as an English speaker.

While the Spanish alphabet has an extra letter and symbol to learn on top of the English alphabet, it has a lot more in common than not.

The Royal Spanish Academy (RAE) determined in 2010 that only the ñ constitutes a separate letter of the Spanish alphabet, making it 27 letters.

Aside from this, the specific sounds of the Spanish alphabet are very easy to learn, even easier than English!

In English, although there are different studies that differ in the number of vowel sounds, experts do agree that there are more than the five symbols used to represent them. With the exception of diphthongs (two vowels in a single syllable), Spanish vowels have one sound and will always make that sound, no matter where they are placed in a word.

Once the basic formula is learned, speaking and spelling with confidence are not far away, making getting started with the Spanish language a lot less overwhelming than with most other languages.

2. Many of the same words

Spanish and English have thousands of cognates.

Of course, remembering these words is much easier than having to learn new ones. By studying the cognates between English and Spanish, you can increase your word bank by hundreds of words in no time!

What makes it even easier is that identifying cognates is somewhat systematic.

There are certain word endings that will almost always translate to the same word from Spanish to English, such as the Spanish ending -ción to the English -tion. 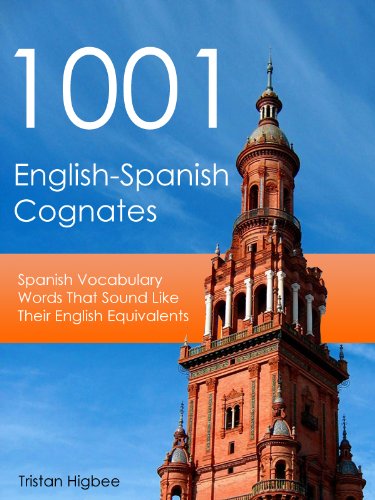 To further study your cognates, a complete list is available here, and you can buy a detailed book that includes 1001 cognates on Amazon.

You will be amazed by how much Spanish and English have in common when it comes to cognates and borrowed words, and how much you can learn overnight with these.

Be sure to watch out for false cognates, though!

One of the first things you will learn in Spanish is that in a sentence the adjective comes after the noun instead of before as in English.

Sure, it is a hard thing to get used to, but other than that most of the word order in a sentence in Spanish stays the same as in English.

When compared to most other languages, the syntax of Spanish and English are very similar.

And to make it even better, the syntax is a lot less strict in Spanish.

In English, if one word is said in a different order, it will sound very strange and likely be noticed or even misunderstood. But in Spanish, there are usually multiple ways that a sentence can be put together.

For example, when asking a question in Spanish, we do not have to worry about the extra words in the sentence. There is no need for does, is, are or any of those other tricky auxiliary verbs that make a sentence proper in English.

Usually, the subject is omitted in a question since the conjugation of the verb already states the doer of the action, and as long as you follow the few basic rules of Spanish syntax, you’re golden.

For example, here are a couple of different ways to ask the same questions in Spanish:

To make things nice and easy, both languages pluralize by adding -s or -es to the end of words.

However, in addition to the noun changing in its plural form, the article before the noun and any accompanying adjectives must change as well.

The adjectives in front of the noun must also be pluralized. Pluralizing adjectives is basically the same as pluralizing the noun, which means, in most cases, just adding –s to the end of the word. Here are some examples to tie this all together:

While in English, we have dozens of contractions and Spanish only has a handful, they do still exist!

There may be more contractions, depending on which region you are in, but almost all Spanish speakers will know these two: del and al.

They may be unrecognizable as contractions at first, since Spanish does not use apostrophes, but it is still the same concept.

The contraction del comes from the two extremely common words de + el, which are very often next to each other in a sentence. De is the preposition meaning “of” or “from” and el is the article meaning “the.”

Here is an example of this contraction being used in a sentence:

The contraction al comes from a + el. The preposition a is used in a large variety of ways, but most often in this case as “to.” The contraction is used when wanting to say “to the,” if “the” precedes a masculine noun.

I know, that sounded really confusing. Here is an example of it in a sentence:

Vamos al mercado is used instead of Vamos a el mercado. (We are going to the market.)

There, now give yourself a pat on the back. You learned the contractions Spanish has to offer in just a few minutes!

Compared to learning some other languages that do not use any capitalization or punctuation (some languages, such as Thai, do not even use spaces between words!), learning Spanish is not a difficult adjustment at all in this respect.

Spanish will capitalize many of the same words and use much of the same punctuation that we are used to, they just use less of it and sometimes in a different way.

Here are a few instances when Spanish capitalization rules are the same as in English:

And here are some instances when it is not:

Here are a few instances when Spanish punctuation works the same as in English:

And here are some instances when it is not:

Luckily, this part of the Spanish language is so similar to English that it would be very rare that mistakes in any of the above would cause a misunderstanding, so we finally get to relax a little.

But of course, knowing how to capitalize and punctuate just like Spanish speakers do when writing in their language is always a plus! And this is one of the simplest, and quickest, aspects of Spanish that you can master.

Congratulations on making it this far.

You now know the six most important similarities between Spanish and English to give you a head start on your learning.

Now’s the part when you go and find these similarities in action! If you can, one fun idea is to read Spanish content side-by-side with an English translation—for example reading “Harry Potter y la piedra filosofal” alongside its English counterpart, seeking out a bilingual book, or watching authentic Spanish videos in the FluentU language learning program with both Spanish and English subtitles enabled.