The 4 Spanish Porques and When to Use Them

In Spanish, even the slightest thing, like a space or an accent mark, can change the meaning of a sentence completely.

This especially applies to the Spanish porque.

Don’t believe me? Keep on reading and learn about the four Spanish porques to find out how! 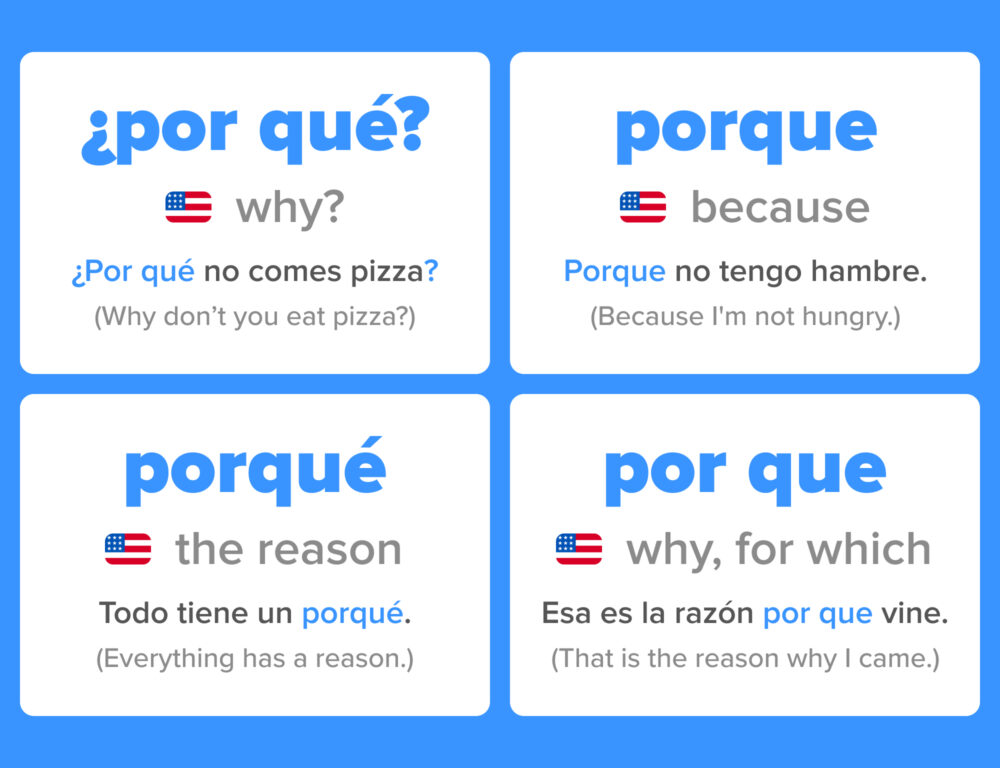 Por qué is one of the most often used of the four porques. It means “why,” and it’s very easy to use because it works exactly the same as in English.

When you want to ask why, write por qué. Notice that it’s made of two separated words with an accent mark over the e.

Take a look at the following examples:

¿Por qué has venido? (Why have you come?)

¿Por qué no comes pizza? (Why don’t you eat pizza?)

As a question word, it can also be used in indirect questions:

No sé por qué has venido. (I don’t know why you have come.)

Me pregunto por qué no comes pizza. (I wonder why you don’t eat pizza.)

Quiero saber por qué te vas. (I want to know why you are leaving.)

In English, when you ask a question using “why,” you’ll probably obtain a spoken answer beginning with “because.” This is also true of Spanish, but our word for “because” is actually another member of the “porque family.”

In Spanish “because” is porque, and it is written as one word without an accent mark. Use this word only when you are giving your reasons:

¿Por qué has venido? Porque tengo tiempo libre.
(Why have you come? Because I have some free time.)

¿Por qué no comes pizza? Porque no tengo hambre.
(Why don’t you eat pizza?) Because I am not hungry.

¿Por qué te vas? Porque ya es muy tarde.
(Why are you leaving? Because it is too late already.)

As in English, you will find porque when reporting events as well:

Me dijo que no vendría porque no tenía tiempo.
(He told me he would not come because he didn’t have time.)

Mi hermana me contó que volvió porque se había olvidado la tarjeta de crédito.
(My sister told me she came back because she had forgotten her credit card.)

Ella dice que no come porque no tiene hambre.
(She says she is not eating because she is not hungry.)

This is the noun form of the porque. El porqué is normally translated as “the reason,” or less commonly as “why” (used as a noun).

Porqué can be used with an article, be plural (as in English “whys” and “wherefores”), be modified by adjectives, etc. See this fascinating noun in action:

No entiendo el porqué de tu decisión.
(I don’t understand the reason behind your decision.)

Me preguntó los porqués de mi decisión.
(He asked about the whys (the reasons/the causes) for my decision.)

Finally, here you have other useful expressions with porqué that might come in handy:

Todo tiene un porqué. (Everything has a reason.)

Sin un porqué. (Without any reason.)

El porqué de todo. (The reason for everything.)

Por que (two words without an accent mark) is definitely the most difficult and the least commonly used of the four porques. It can be translated as “for which,” but there are going to be times when you will have to translate it as “why” or even “so that.”

It is present only in two very specific situations, so if you bear in mind the following two rules, you will have no problem with it:

1. Write por que when you have a preposition (por) and a relative pronoun (que).

In these cases, you will be able to translate it as “for which.”

Esa es la razón por que vine.
(That is the reason for which I came.)

Este es el motivo por que no llamé.
(This is the reason for which I didn’t call.)

2. Write por que when a phrasal verb using por is followed by que.

Opté por que no vinieras. (I decided that you wouldn’t come.)

Me preocupo por que no te pase nada. (I take care so that nothing happens to you.)

Lucho por que haya paz en el mundo. (I fight so that there is peace in the world.)

Hice lo que pude por que no llegáramos tarde. (I did what I could so that we wouldn’t be late).

As you can see, por que is quite puzzling and it tends to be wrongly used even by native Spanish speakers!

So don’t worry if you can’t master it at once. Start with the easy ones—por qué and porque—then slowly start practicing with porqué, and finally confront por que. It will be a piece of cake after the whole process!

It is worthy to note that there is a situation that all four pourques tend to be grouped together: in texting! When texting in Spanish, the porque is often shortened to pk, pq, xk, or xq.

Any of the porques might be shortened to one of these abbreviations, so when it comes to texting, you may have to really focus on context clues to understand which one is in play!

It can help to see this kind of grammar used in context by watching authentic videos in Spanish. You can find videos on YouTube that are likely to contain variations of porque.

The language learning program FluentU also houses a collection of videos, and they come with interactive captions that explain vocabulary in context. Through the captions, you can confidently know which porque is being used and how it functions.

With constant exposure, you’ll quickly become familiar with these tricky words and their mannerisms!