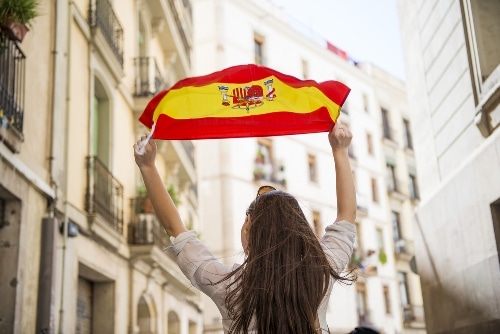 So you want to sound like a native Spaniard?

Well, if you’re looking to learn the Spanish from Spain (Castilian Spanish), forget everything you’ve ever learned about being overly polite and politically correct.

Truth is, decir tacos (cursing) is fairly common in Spain and respects no age boundaries.

Both the very young and very old can be heard spouting some expressions I wouldn’t exactly feel comfortable translating for my mother.

The Spanish don’t waste time beating around the bush and they certainly aren’t offended by the expressions that we tiptoe around in the United States. A Spaniard with very dark skin is referred to as a negro (black person). Someone who is fat is fat (gordo), not round, plump or big-boned, and they themselves will be the first to tell you so.

With that in mind, let’s take a look at some of the most popularly-used Spanish expressions out there.

While these popular Spanish expressions are of a much tamer nature than what you’re likely to hear on the streets of Madrid, it still might take some stepping out of your comfort zone to begin to use them in conversation.

Once you get used to these colloquial gems and start to use them with native speakers, you’ll most likely notice a change in the way in which you’re perceived. I can assure you that your Spanish will automatically

rise from guiri (foreigner) status to an impressive level of fluency.

So, instead of recycling the mechanical, antiquated language that you learned in school, it’s time to revamp your vocabulary and start sounding súper Spanish with these wonderfully ridiculous expressions.

And if you enjoy these authentic expressions, you can pick up more natural speech on FluentU. FluentU takes real-world videos, like music videos, commercials, news and inspiring talks, and turns them into Spanish learning experiences.

Other sites use scripted content. FluentU uses a natural approach that helps you ease into the Spanish language and culture over time. You’ll learn Spanish as it’s actually spoken by real people—perfect for picking up real Spanish expressions and sayings.

Translation: To ride a chicken

Not surprisingly this Spanish expression actually means to “make a scene” which is definitely what would happen if the translation was taken literally.

Montar pollo without the un carries a slightly different and more positive connotation. It means to liven up or animate a crowd. Here’s a couple of usage examples:

This expression comes with a warning: Be very, very careful about the gender of pollo! The feminine version of the word turns this phrase into something rather crass.

Translation: Your bird is escaping!

This is what Spaniards say when there’s a security breach at Los Pantalones.

So, basically, it’s what you say when you spot someone with their zipper down—men and women alike. Not quite as subtle as our three-lettered XYZ (examine your zipper) or “you’re flying without a license,” this is certainly one of those phrases that may take some stepping out of your comfort zone to start using.

For the timid there’s always just the basic “tienes la cremallera abierta” (your zipper is open).

Translation: You’re going to tell daddy how to make babies?

This one is actually not as scandalous as one might think. It’s used by both men and women alike to express incredulity when someone corrects you or gives you advice on a topic about which you’re very well-informed.

So if you’re an expert on—let’s say—reptiles and someone tries to test your reptilian expertise it would be the perfect time to break this phrase out.

Translation: To drown in a glass of water

This phrase is much more visually stimulating than the English equivalent: “make a mountain out of a molehill.”

Translation: The mother that bore me!

For a while I thought Spaniards were saying “¡la madre que me barrió!” (“The mother that swept me!”) You can only imagine my confusion. This is an expression I hear so much here in Spain along with a handful of other “mother” phrases (the Spanish language in general really does seem to have quite the fixation on mothers).

It’s used to express surprise or when something is unbelievable. Perhaps a more accurate translation would be something like “holy sweet mother of God!”

Translation: To give the can

Nothing to do with cans, bottles or other containers in English, this phrase means to nag, hassle, pester, annoy or bother.

Translation: To do the cobra

The neck acrobatics one does when trying to avoid a kiss.

Anoche en la discoteca ella le hizo la cobra a Jaime cuando intentó besarla. (Last night in the club she dodged the kiss that Jaime tried to give her.)

This is a fairly modern expression that is used to refer to the awkward and sympathetic pat on the back sort of hug that one gives to someone that they have sentenced to the “friend zone.” In other words, this hug isn’t leading anywhere.

Translation: To throw a fart at one’s self

Why this verb is reflexive I’ll never understand, but it sure makes for an unforgettable expression. The real meaning is simply “to fart.”

This is not another phrase to refer to flatulence. If someone va pedo, they’re more than a little bit tipsy. Estar pedo and llevar un pedo are two more variations of this expression.

Translation: To be the sacramental bread

Sacrilege! Perhaps, but like I said at the beginning of this post, being inoffensive is not exactly at the top of the list of concerns for the Spanish. A more accurate translation is “to be the bees knees” or “to be the shiz.”

¡Carla es la hostia! Sabe de todo. (Carla is the bees knees! She knows about everything.)

Translation: To be made a Christ

Here’s another slightly sacrilegious expression to add to your growing Spanish vernacular. This expression refers to someone or something that’s a complete mess.

Translation: To be fussy

This phrase is used to refer to both people who are picky about food and those who are obsessive about little things in general.

Translation: To put the horns (on someone)

Ella terminó con su ex-novio porque le puso los cuernos. (She broke up with her ex-boyfriend because he cheated on her.)

Translation: With money the dog will dance

“Money talks” would be the appropriate English equivalent for this phrase, although I much prefer to imagine a dog dancing.

Translation: To be in the age of the turkey

I first learned this phrase in the high school where I teach. Middle school and high school students can be said to be in the “age of the turkey” which is a very interesting image to attribute to those awkward years we all remember (or try our hardest not to).

There are a couple different possible origins for this phrase. One option is that back in the day dwarves had to entertain royalty in the courts and constantly feign merriness. The second option is that enano can be an affectionate way to refer a youngster and—as we all know—kids just tend to have more fun.

Translation: To have a flower in the backside

This phrase has positive connotations and is usually spoken with envy. It means “to be extremely fortunate.” A common phrase that the Spanish say is “nació con una flor en el trasero” (he was born with a flower in his backside) which suggests that a person is lucky and doesn’t have to work much for things to go well for them.

Translation: To have snout

If someone “has snout” what they actually have is a lot of nerve.

Translation: The oven is not ready for buns

Contrary to what this phrase may sound like, it has nothing to do with pregnancy. You would use this phrase to let someone know that whatever it is that they’re going to say, ask or do needs to be left alone for the time being. It’s not the best moment and you can’t be bothered. So the situation is the oven, and the buns are whatever is wanted.

If, for example, you just got in a fight with a friend, this would be a good phrase to use in order to explain to someone that the timing isn’t exactly right for you to be asking that friend to lend you money.

I hope you’ve found these phrases both useful and memorable. I certainly didn’t have to learn them twice!

Spanish is such a rich language. As you continue to advance you’ll find—depending upon which teacher you’re learning from or which Spanish-speaking country you end up in—that the colloquial expressions will differ widely. So, embrace the diversity of the Spanish language!

And always, always make sure you have plenty of good laughs along the way.

Constance Chase is a writer and English teacher living in Madrid, Spain with her Spanish husband, Javier. When she is not making hopeless attempts to explain terms like “hipster” and “swag” to her students, she can be found reading on the Metro or wolfing down Spanish ham and two euro wine in old man bars.