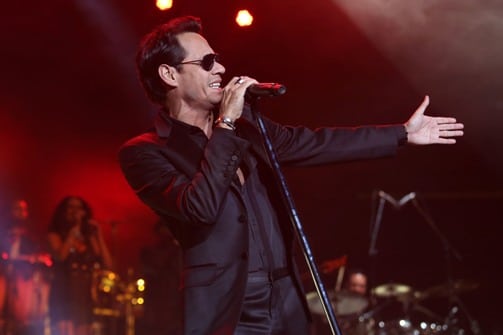 Do you want to learn great Spanish while adding a little romance into your life?

Me encanta (I love) Spanish-language music. With numerous talented stars crossing over from Spanish to English, I can’t be the only one singing and dancing along.

The best part is, music from Spanish-speaking singers is more than just spicy and fun. You can also greatly improve your Spanish by listening to your favorite stars.

Whether you’re a romantic at heart or take a more alternative bent, you’ll make your Spanish better by turning on the radio and YouTube.

Why to Brush Up on Spanish Through Music

Learning Spanish from textbooks and vocabulary flashcards is necessary sometimes, but it gets boring. We’re more likely to retain and learn—even when the material is difficult for us—when we’re having fun.

So put those flashcards down, and sing and dance to your favorite Spanish-speaking musicians instead!

You can do it from anywhere

Yes, those handy-yet-often-dreaded textbooks are portable too. But can you read while you’re driving to work? Music is more portable than any other medium out there.

Radio stations play all around the world, and all your music files or CDs only require a portable player (hello smartphone) or a computer. Whether you’re running errands, at the airport or on a quick break between classes or meetings, it’s easy to press play.

We remember better when we hear something repetitively or use an acronym. Couldn’t understand the chorus? It’ll come up again. We learn Spanish well through our favorite songs for the same reason we listen to English songs on repeat: We’re addicted to the sound and the beat.

Find a famous Spanish-speaking singer you love, and you’ll want to dance to their music over and over again—making it easy to learn the lyrics.

Unless you move to a Spanish-speaking country, learning regional slang can be tough. The good news is, you can still learn the slang by listening to popular contemporary Spanish music.

Famous Spanish-speaking singers also speak with an accent true to their home country. By imitating singers and singing along to the lyrics, you can sound like a native speaker in no time!

How to Improve Your Spanish with Famous Singers

Before listening, read and translate the lyrics on your own

It’s tempting to turn on the English subtitles or read the translated lyrics while you listen to the song. But if you do that, you’ll be as focused on humming along to the catchy beat as learning the English translation.

If you’re at the beginner or low-intermediate levels, it’s best to take the time to look up the lyrics in Spanish, and without listening to the song, translate it using your Spanish-English dictionary for individual words you don’t know. By taking the time to learn the lyrics first, you’ll commit them to your memory as you listen along later.

If you have a more advanced level, rather than translate, just read the Spanish lyrics to see if you understand what the song is about. Use a Spanish-Spanish dictionary for any unfamiliar words.

While looking up the lyrics is helpful, it’s also time consuming. A quicker, more effective way to learn a song’s lyrics is by using FluentU. FluentU is an online immersion platform that takes real-world videos—like music videos, news, commercials and inspiring talks—and turns them into personalized Spanish lessons.

Listen to the same song on repeat

Unless you’re an extremely advanced Spanish learner, the song probably won’t make sense the first time you listen to it, even when translating it in advance.

This is where the “repeat” and “play on loop” functions of your music player come in handy! Pick songs from famous singers you enjoy, so that you won’t mind listening to them over and over again until you understand the song.

Even if you spend a lot of time translating lyrics and listening to songs repeatedly, there still may be words, idioms or slang that’s confusing. This is when you can go onto YouTube and view the music video.

You can often gain understanding of phrases from the context of the video. Learning these phrases not only increases your vocabulary, it also gives you insights into Spanish culture from the privacy of your own home.

Listen to Spanish music for an hour every day

Learning Spanish takes dedication, and listening to Spanish music is no exception to this. Make sure to carve out at least an hour to either be translating music, listening to music or watching music videos.

Since listening to famous Spanish music is fun, this is easier than it sounds! During a particularly busy day, your hour can even include having Spanish music on in the background while you get ready in the morning, while you wash dishes or while you commute to school or work. 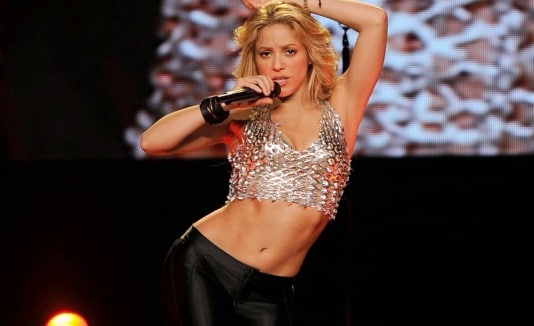 One of the most popular current crossover artists in Spanish and English, Shakira’s music has won Grammys and Latin Grammys, making her one of the most successful artists in the world. Shakira’s pop and dance music is entertaining, catchy and has broad appeal, making her a perfect artist for Spanish learners.

Shakira is Colombian, and her Spanish is as clear to discern as her singing voice is pleasant. If you love Shakira’s hits in English like “Whenever, Wherever” and “Hips Don’t Lie,” you’ll be thrilled to know that her songs in Spanish are even better.

One way to learn Spanish through famous crossover artists like Shakira is to listen to songs that are also hits in English, such as “La Loba,” her famous hit “She Wolf.” The music videos are identical, making it easy to refer back to the English version if you get confused.

Shakira’s been famous in her native Colombia since the late 1990s, so there’s a wealth of Shakira songs in Spanish for you to listen to in order to improve your Spanish. 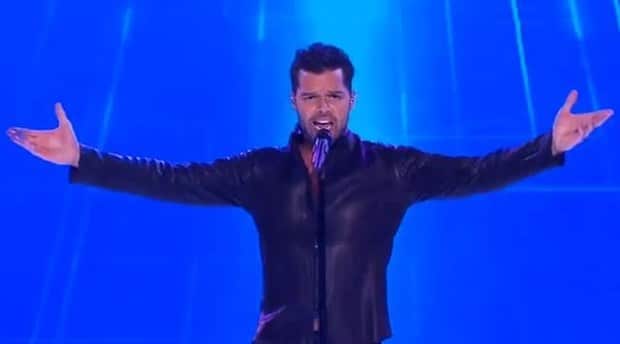 Ricky Martin is another name you’re most likely also very familiar with. The Puerto Rican-born singer first became famous as a member of the band Menudo before embarking on a successful solo career.

In the 1990s he established himself as a successful crossover artist with his hit “Livin’ La Vida Loca,” popular in both Spanish and English. He remains popular all around the world today, and he is now also a citizen of Spain thanks to family ties.

You may remember Ricky Martin’s romantic ’90s hit “She’s All I Ever Had.” In Spanish, this song is called “Bella” and uses the same music video as the English hit. Martin sings slowly in this song, and the themes are broad and easy to understand, making it a perfect hit for learning Spanish. 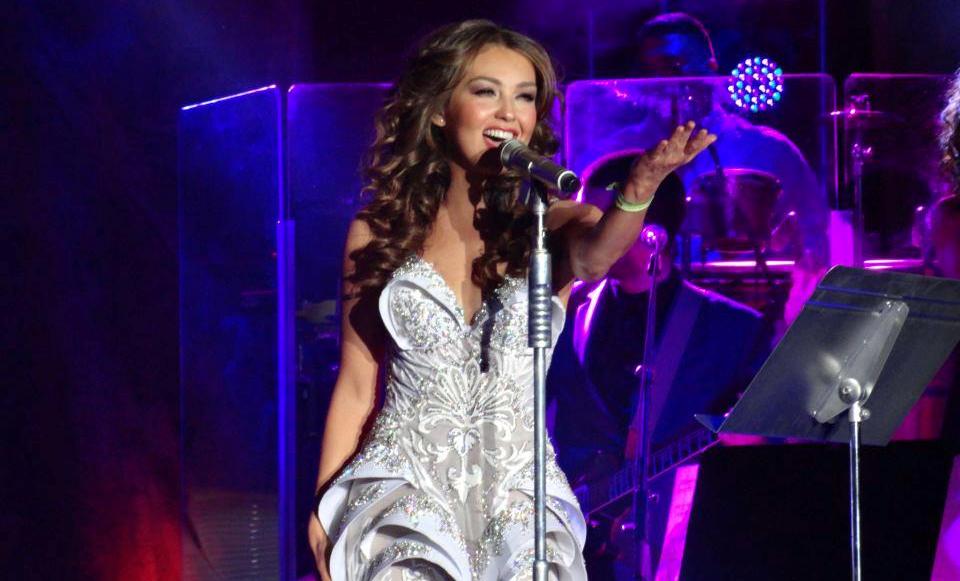 Although not as well known in the United States as the two artists above, Thalía is a huge star in her native Mexico—and has also achieved crossover success in English. Along with singing publicly since she was a child, Thalía has acted in numerous telenovelas and films, and is a published author.

Thalía’s pop music is palatable to a wide variety of musical tastes. And even in her faster songs, she sings relatively slowly, helping make her easier to understand. One of Thalía’s first mainstream hits is “Piel Morena,” a medium-tempo song with a consistent, catchy beat.

Marc Anthony was born and raised in the United States to Puerto Rican parents. A fully bilingual artist, Marc Anthony has been singing and releasing songs in Spanish and English since early in his career in the early 1990s.

Perhaps because he grew up in the United States, Marc Anthony’s Spanish accent is particularly easy for native English speakers to understand. Anthony’s romantic pop sound is pleasant to the ear and a great place to start for learning Spanish.

You may not know that Marc Anthony’s English hit, “You Sang to Me,” was also recorded in Spanish (“Muy Dentro de Mí”). 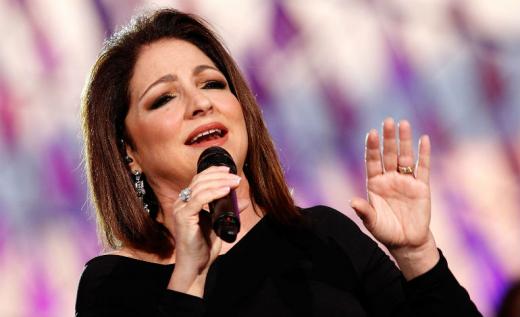 Gloria Estefan is Cuban-American and, in terms of album sales, the world’s most successful English/Spanish crossover artist. Unlike the other famous singers on this list, Estefan’s first music success was in English; she released a Spanish album several years after her first big English hit, “Conga.”

However, don’t let that deter you. Not only is Estefan’s first language Spanish, but she’s actually trilingual, speaking Spanish, English and French.

Estefan’s rich, deep voice is easy to listen to in Spanish, and her music transports listeners to the past. Her hit song “Mi Tierra” was her first in Spanish, and a fun song with a great beat. 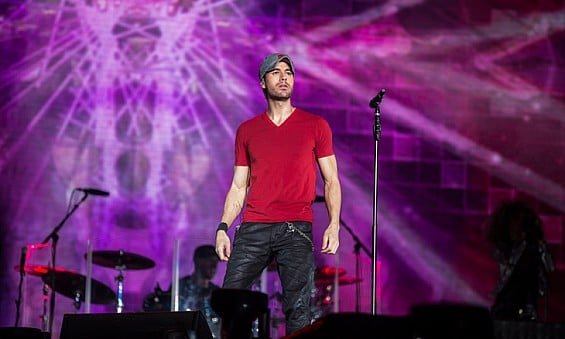 When the Spanish-born Enrique Iglesias released his first album in the 1990s, his music was inevitably compared to Ricky Martin. However, since then, Iglesias has carved out a niche of his own and is a best-selling crossover artist.

Iglesias’s music is known for being particularly sensual and romantic in flavor, and many who’ve listened to his music have no doubt dreamed of him becoming their novio (boyfriend).

One of Iglesias’s recent hits is the song “Cuando Me Enamoro” which he recorded with Juan Luis Guerra. Don’t be fooled by the English at the beginning of the music video; this classic, romantic song is completely in Spanish.

These famous Spanish-language singers have long track records of albums and hits, so you should be set for many hours of learning Spanish with the greats. What are you waiting for? Close the door, turn the volume up and start singing and dancing your way to fabulous Spanish fluency.

Straight from the Horse’s Mouth: 10 Wild Spanish Expressions That Speak of Animals
5 Captivating Comic Books for Spanish Learners of All Ages