20 False Spanish Cognates That Could Get You in Trouble

Once upon a time, I told my Spanish roommates that American food is full of condoms.

When learning a foreign language, making a fool of yourself from time to time is inevitable.

However, by learning about false cognates you can save yourself from making huge Spanish slip-ups!

Take a few moments, explore this post and get to know Spanish false cognates a little bit better.

A Quick Introduction to Cognates

A cognate is a word that is basically written the same, with the same meaning, in both languages. For instance, the English word “sofa” is “el sofá” in Spanish. The same goes for the English words “idea,” “family,” “minute,” “restaurant,” and countless others.

Sometimes, a word only seems to be the same in both languages, but really has two completely different meanings. These are what we call false cognates, and they’re out there lurking just below the surface, waiting for unsuspecting students to amble by and pluck them up by accident.

20 False Spanish Cognates To Be Aware Of ASAP

What it means: Pregnant 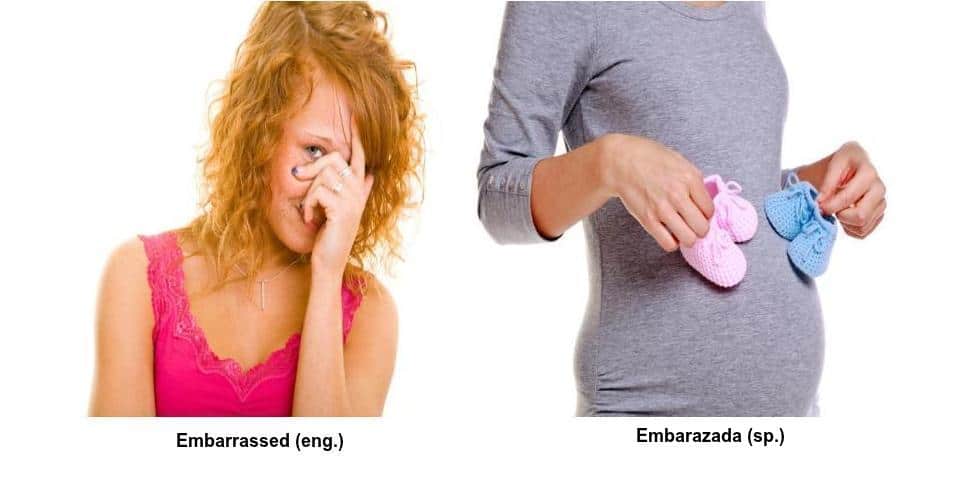 Using the word embarazada incorrectly could leave you, well… embarrassed. There are a few different ways of saying “embarrassed” depending on the dialect, but what I usually go for is tener vergüenza. It literally means, “to have shame,” but it does the same job.

What it means: Success 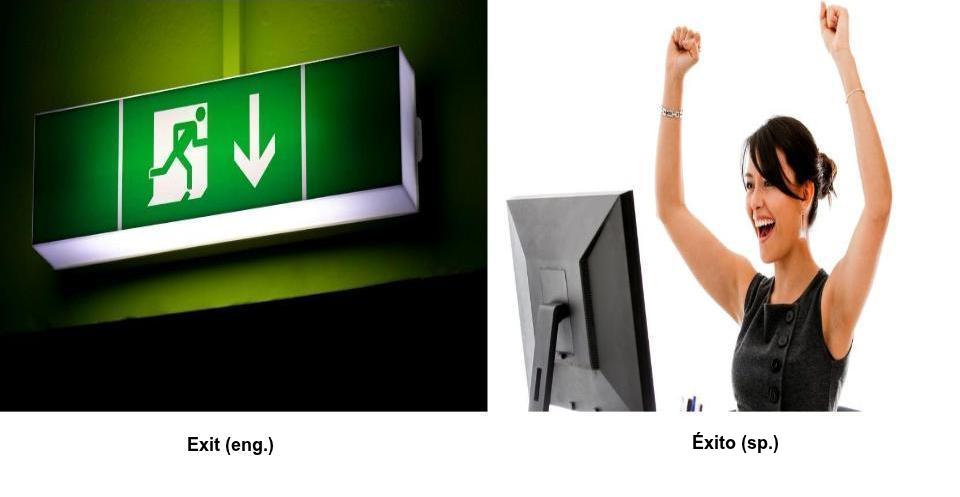 If you were to ask someone where you can find the éxito you might be in for a bit of a philosophical reply. Instead, look for the signs marked salida, and get on with your day. To make things even more confusing, the word suceso in Spanish means “event” or “something that happens.”

What it means: To annoy 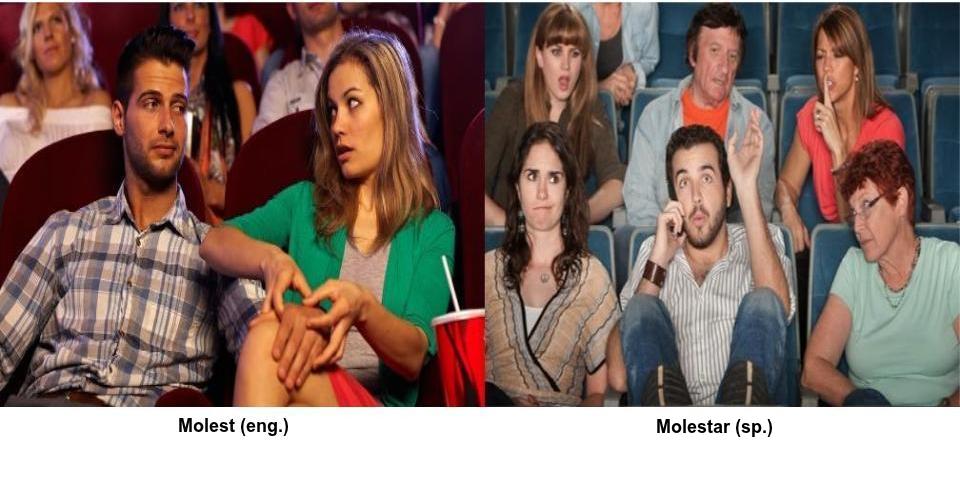 This one does take a while to get used to actually saying out loud, but it’s important to know. You don’t want to get the wrong impression from someone complaining that their boss “molested” them all day in the office. You might want to know that the true translation of “molest” is abusar (sexualmente).

What it means: A cold

Be sure you get this one right before calling in sick to work, otherwise you might accidentally be giving your co-workers a bit too much information. If you are actually constipated, the word for constipation is estreñimiento, but you might still want to keep that to yourself.

What it means: Factory 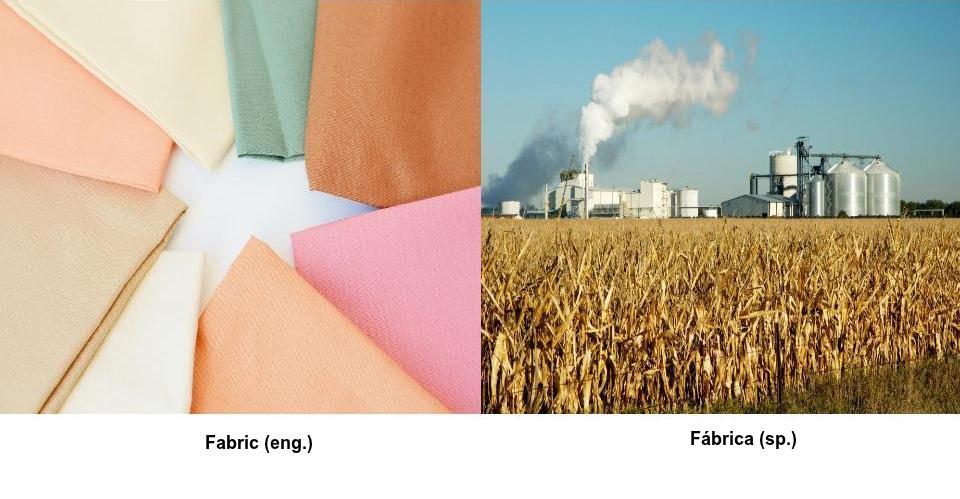 As much as I’d like to wear a shirt that’s made of factories, I don’t think it sounds very practical. Instead, just opt for one made of tela like everyone else, it’s probably much cooler and more environmentally friendly.

What it means: Soup 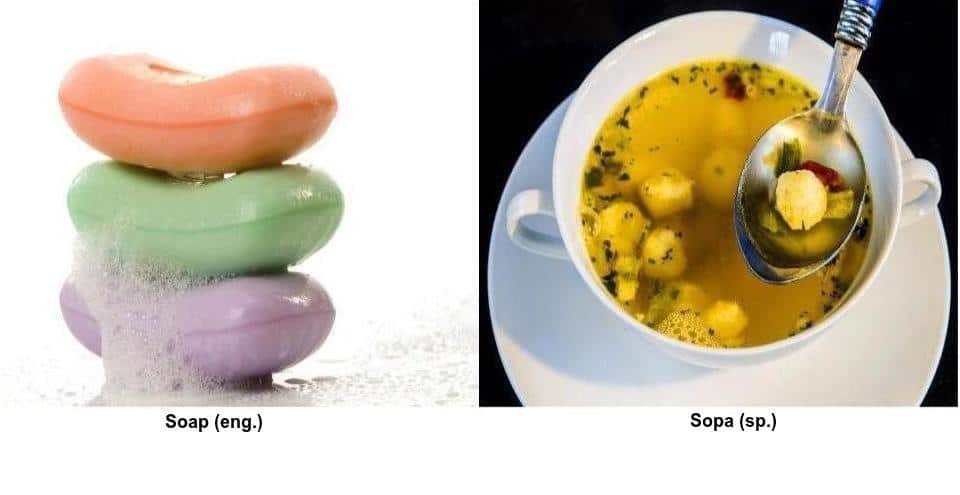 Maintaining a healthy lifestyle is important, and many people are making an effort to clean up their eating habits, but ordering soap in a restaurant might be taking it a bit too far. If you need soap, the word is jabón, not to be confused with jamón, which is “ham” and perfectly fine to order.

What it means: To do/to perform 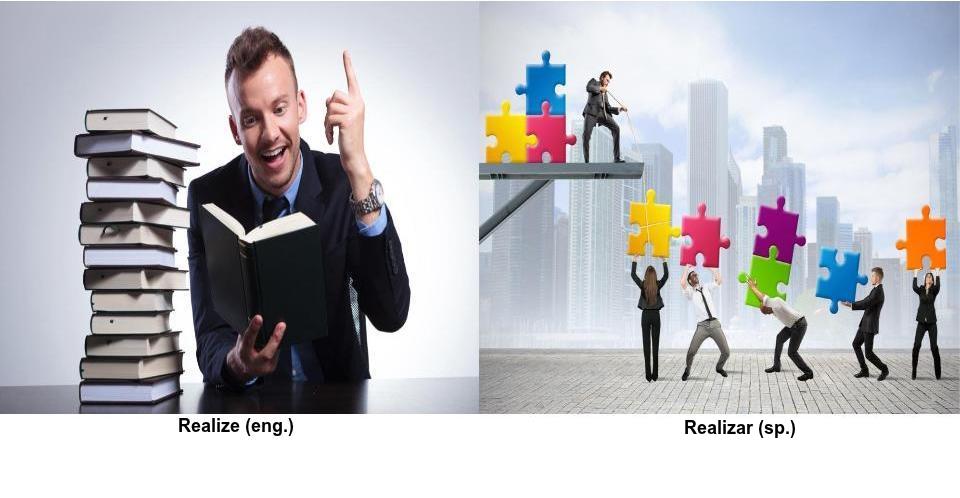 If you want to say that you realized something in Spanish, the way to do it is to say, “Me di cuenta…” Realizar means “to do” or “to perform.” For instance, “You realized your plan to take over the world.” It’s kind of like the word “execute” in English.

What it means: Foot 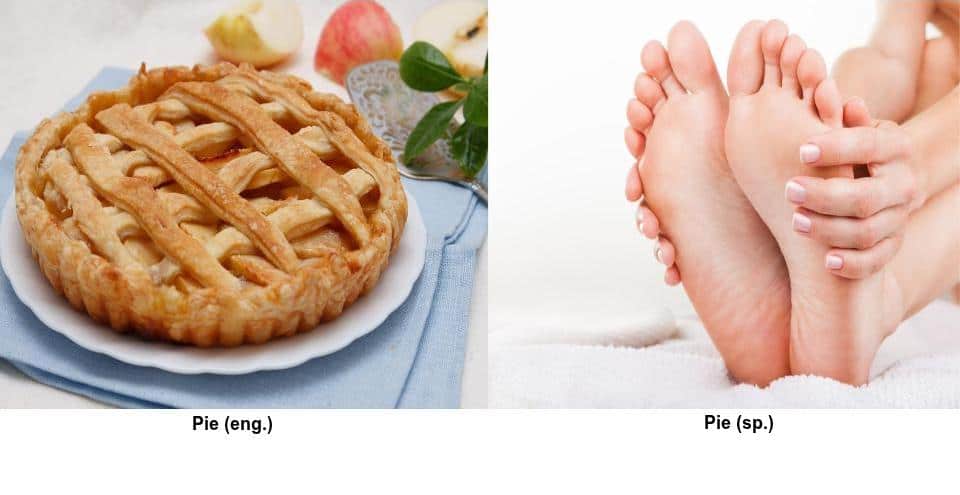 Even though the two are spelled the same, there is a difference in pronunciation. In Spanish, pie is pronounced “pee-eh” and means “foot.” Two feet are dos pies, pronounced, “pee-ehs.” Something I always found funny is that the translation for “toes” is dedos del pie. Literally, “fingers of the foot.” If you want an actual pie, you should order un pastel.

In many regions, the English word for the dessert pie has been adopted directly and is said in a pseudo-English accent. Keep this in mind while exploring delicious Hispanic cuisine.

What it means: Insert 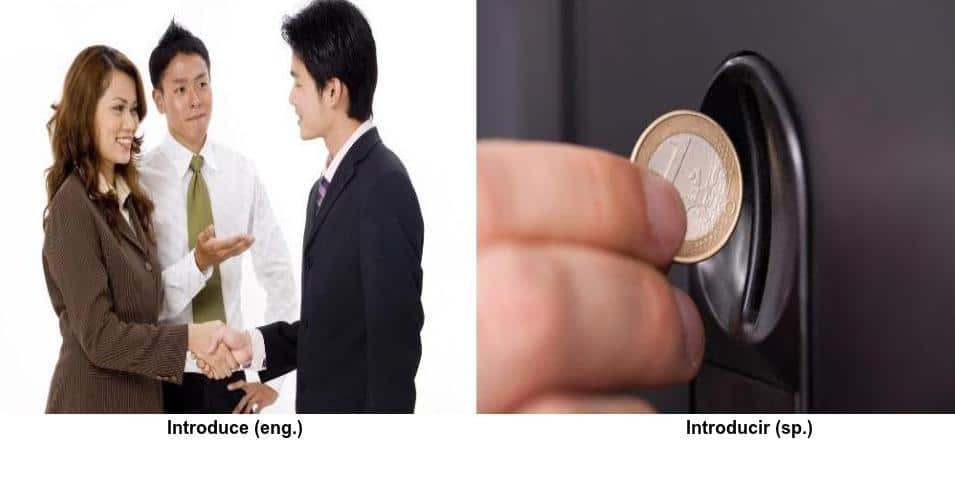 Introductions are sometimes awkward enough without telling your friends that you’d like to insert them into each other. A correct introduction for your friends would be, “Quiero presentarte a mi amigo [Miguel].” No insertion necessary.

What it means: To remember/to remind 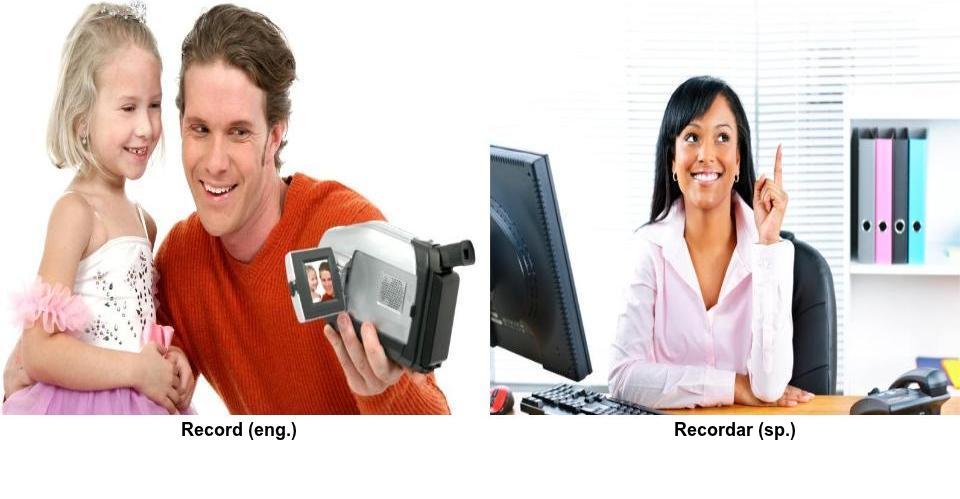 To remember something is recordar. To remind someone of something is recordarse. In a sentence, “Recuérdame mañana que necesito grabar el capítulo nuevo de Juego de Tronos.” Literally, “Remind me tomorrow that I need to record the new episode of Game of Thrones.” Hint: Grabar means “to record.”

What it means: Clothes 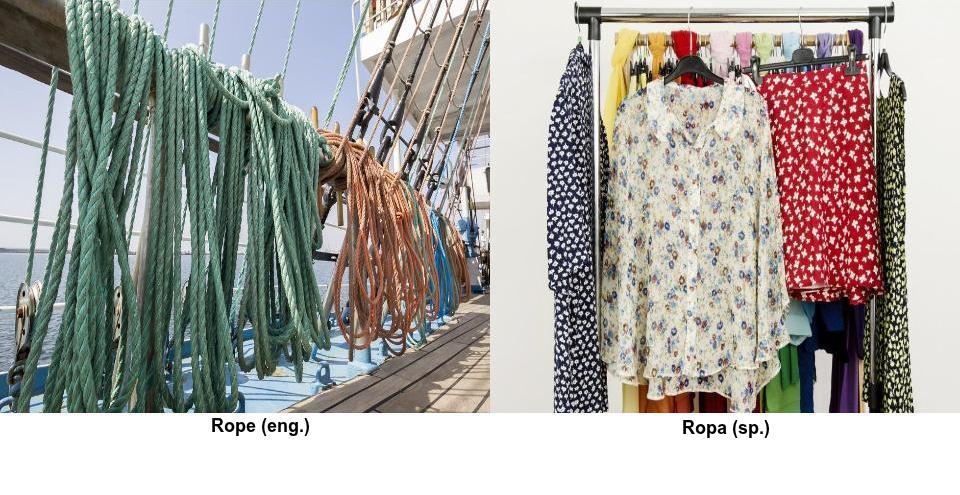 Ropa actually shares a root with the English word “robe,” so it’s easier to remember. Just don’t make the mistake of thinking that Cuban ropa vieja is actually made of old clothes. It’s actually a very tasty dish of shredded beef, usually served with rice. Actual “rope” is called cuerda or soga in Spanish.

What it means: Current 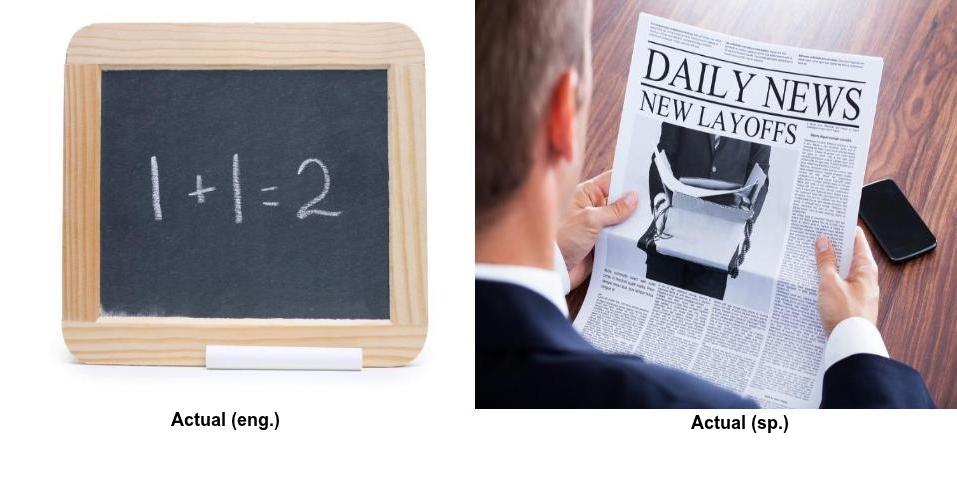 This is a confusing one for beginners as the words are identical, but have slightly different meanings. Actual in Spanish means “current” as in eventos actuales, or “current events.” If you want to say “actual,” use the word real. “Actually” would translate to en realidad, and is a quite common expression.

What it means: To attend 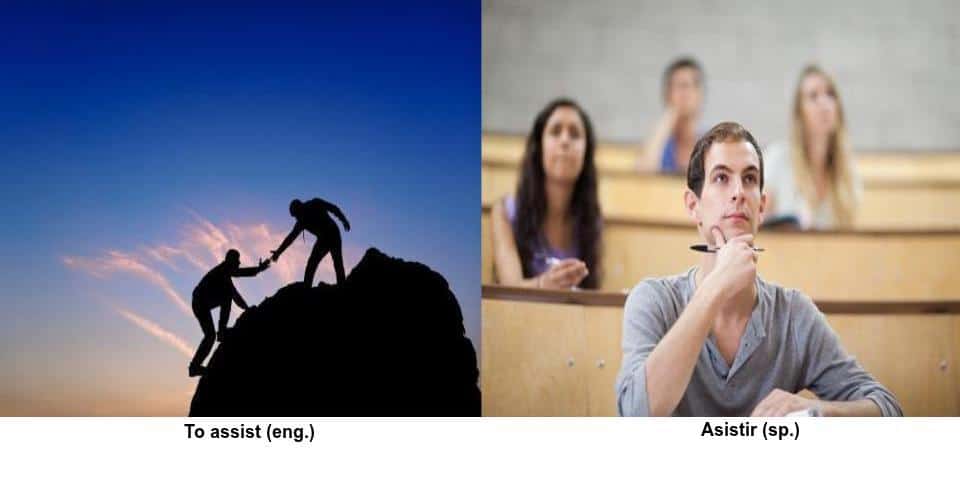 This one has the potential to set your head spinning. Asistir means “to attend” as you would do to a meeting or lecture. Atender means to “pay attention.” So, you can asistir a meeting in order to atender. The word for “to help” is ayudar, and the noun “help” is ayuda. Always a good one to keep in mind.

What it means: Crime 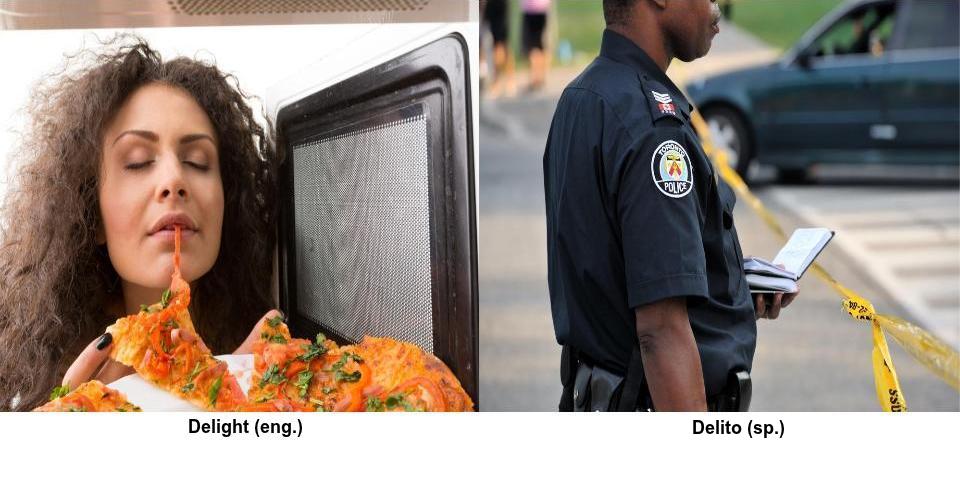 Whatever you do, don’t say “es un delito conocerte.” That means “It’s a crime to meet you,” and probably won’t make you very many friends. “Delight” translates to deleite, but in the previous example it’s better to say “es un placer conocerte.“ Placer means “pleasure.”

What it means: To hit/to punch 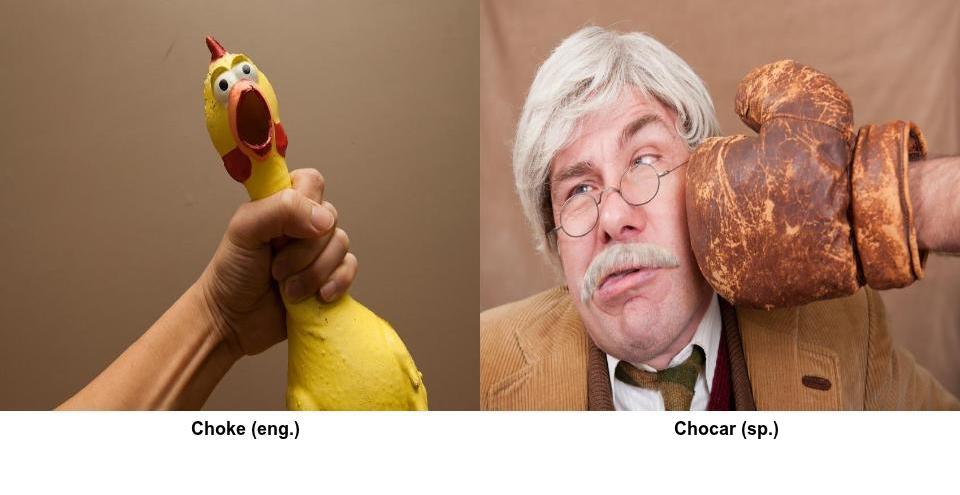 Chocar is what happens when two cars run into each other or two people get into a scuffle. It means “to hit” or “to clash,” not “to choke.” In Spanish, “to choke” is ahogarse if you mean that you’re choking on food or drowning. Estrangular is when a person chokes another person.

What it means: To answer 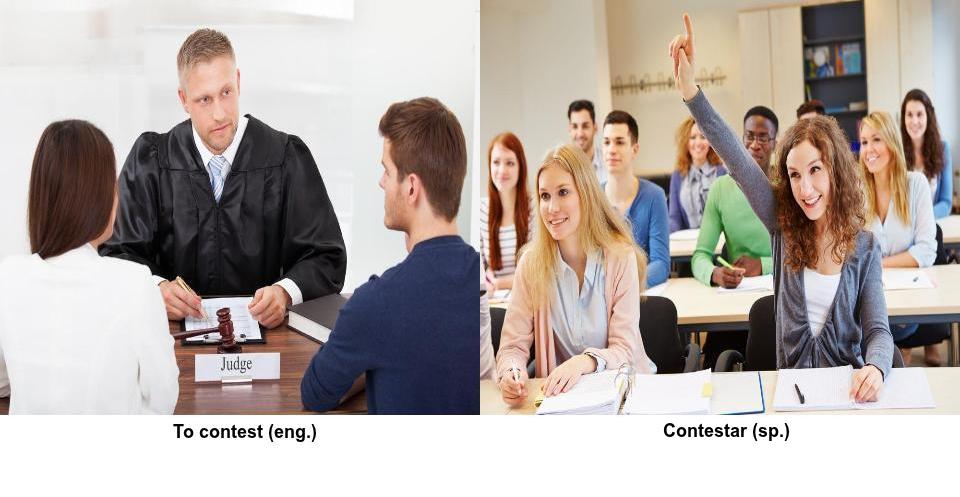 This seemingly strange translation actually makes sense when you think about it. In English, the word “contest” is used when you must answer an argument in court. So it’s easy to see how it could have some relation to the Spanish word contestar, which means “to answer” a question or a telephone. However, in court you would use the Spanish word impugnar to contest a verdict.

What it means: Long 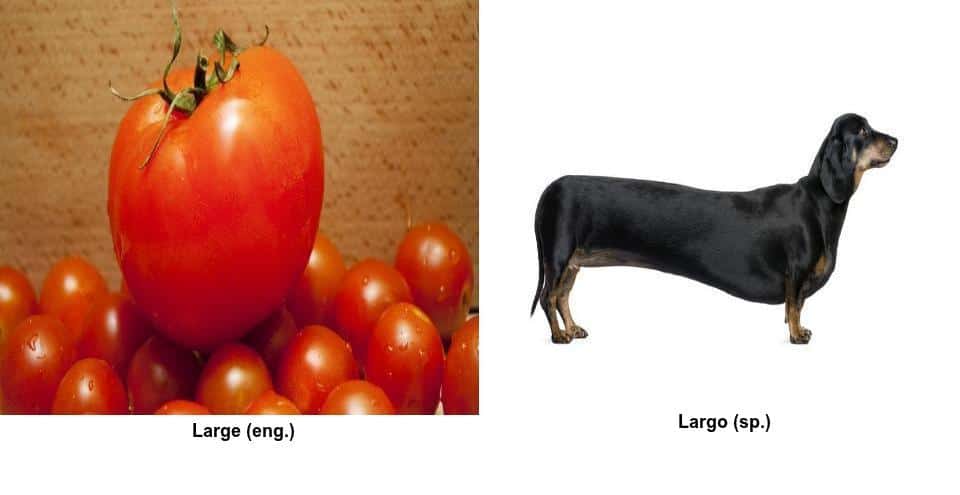 This is an easy one to mix up when you’re a beginner because the two meanings are so similar. However, largo is only used to refer to length, whereas grande is used to refer to overall size. So something could be both largo and grande, or just one or the other.

What it means: Barber or Shaver 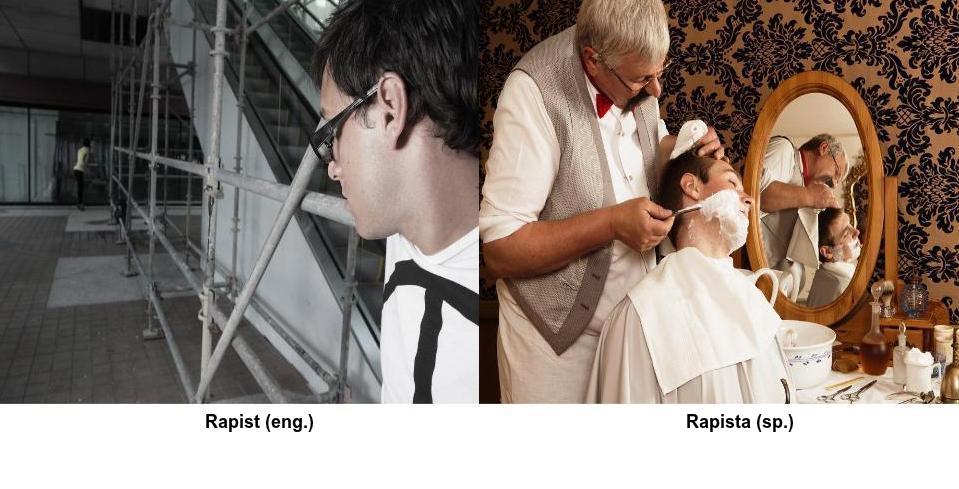 This actually isn’t a very common word, but still good to know. Rapista doesn’t mean “rapist” but actually means “barber” or more precisely, “a shaver” from the word rapar meaning “to shave” or “to crop.” However, a more common word for “barber” is barbero or peluquero. The word for “rapist” is violador.

What it means: To send 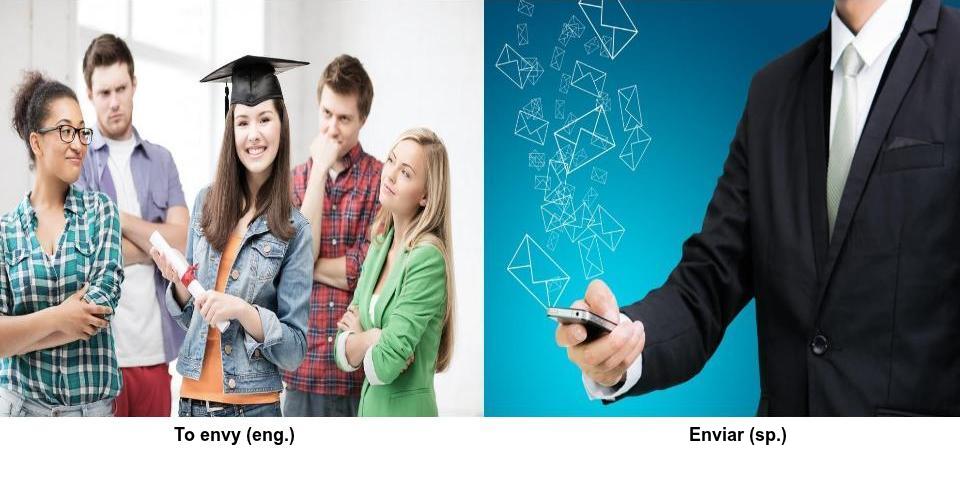 Far from being one of the 7 deadly sins, enviar simply means “to send.” You can “enviar” a letter, a package, or an email, but you can’t “enviar” your friends (well, I guess you could, but you should punch holes in the box). If someone has something you wish you had, you can tener celos (to have jealousy) or envidiar (to envy) them.

What it means: Condom 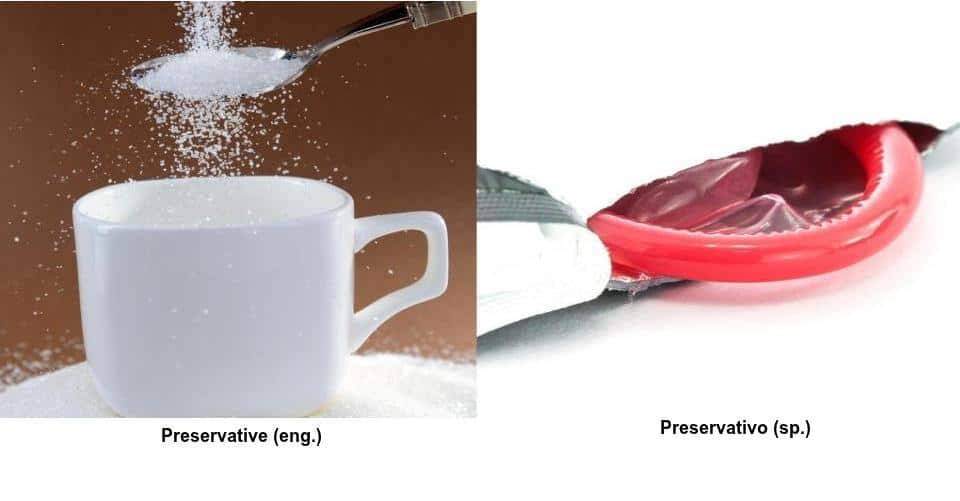 So here’s the one that got me in trouble. What we call preservatives in English are called conservantes in Spanish. The word preservativo refers to condoms. You can also say condón, but just don’t say that they’re in your food or your roommates might tease you for an entire semester.

So there you go, if you can remember these 20 false Spanish cognates you’ll be able to avoid quite a few mix-ups.

If you want to practice, I suggest watching authentic Spanish content such as news clips and YouTube videos to see if you can pick out any of these false cognates. They can help you show how they’re used in real conversations, so you can become more familiar when to use which word. Remember to pay careful attention as some may not come with subtitles or guides to help you along.

For a learner-friendly approach, you can use the authentic video library on the language learning program FluentU. Each video comes with interactive subtitles that translate words and explain their usage, so you can easily spot false cognates with the aid of context. You can also reinforce vocabulary with flashcards and quizzes.

The sooner you learn these false cognates, the sooner you can save yourself from embarrassing slip-ups like mine. Then again, they could make for some good laughs!

Joseph Ratermann is an American freelance writer based in Berlin, Germany. You can see more about him on his website, www.josephratermann.com