As a Korean language learner, you’re constantly working towards making your own sentences properly.

Well, it’s time to level up your power to do so.

In this post, we’ll go over the foundations of Korean sentence structure, so by the end of it, you’re able to start expressing yourself with ease (and grammatical accuracy).

The “Subject-Object-Verb” (SOV) pattern is the most basic structure of Korean sentences.

You introduce the subject first, followed by the object and then finally, the verb.

The first half of the Korean sentence introduces the cast of characters (subject and object), and the second half tells you the thing (verb) that happens between them. That’s the essence of an SOV sentence pattern.

English, on the other hand, is “subject-verb-object” (SVO).

This puts English speakers at a disadvantage who are used to thinking that “she drank milk,” instead of “she milk drank.”

Sometimes, the sentence doesn’t need an object to be meaningful. It can be just the subject and the verb.

Sometimes, a sentence only has a subject and an adjective.

In the Korean sentences you’re studying, you might have noticed that there are characters that come immediately after the nouns. These characters follow your nouns like the tail of a dog.

And they show up in Korean sentences over and over again.

What are these widgets on nouns, anyway?

These are Korean particles. (We don’t have them in English.)

If Korean particles could talk, they’d tell you things like:

“Hey, this noun right here is the topic of the conversation!”

“Hey, this one is the subject of this sentence!”

“Yo, dawg, this noun is the object of the sentence!”

So instead of looking at particles like little annoyances that make a language learner’s life a living heck, you should see them as little helpers that tell you what the different parts of a sentence are all about.

They label and tag everything so even if a sentence is jumbled, the meaning isn’t lost. Different particles serve as neon lights that tell you how the different words function in the sentence.

In reality, there are a lot of Korean particles. About 20 are commonly used.

Here, we’ll be talking about three that are critical in sentence structure.

은 and 는 are topic markers. When they follow a noun, it means that noun is elevated as the topic of the conversation. All subsequent sentences should revolve around the topic unless another one is introduced.

은 and 는 are essentially the same.

When you introduce yourself, you use topic markers:

One important thing about these topic markers is that embedded in them is a contrasting function. For example, you say:

Topic markers imply a contrast. In the example, saying the boy is smart also implies that somebody else may not be so smart.

You aren’t directly saying it, but by using the topic marker, an unvoiced contrast is made.

Subject markers are very aptly named. They point to the subject of the sentence.

If you still remember your grammar basics, you know that the subject is the star of your sentence.

In sentences where an action (verb) is central to its meaning, the subject is the doer of that action.

If it answers questions like, “Who is doing the kicking, eating, driving, etc.,” then that’s the subject.

In other cases, like the statement “Your eyebrows are on fleek,” where an adjective is involved, the subject is the one being described.

The subject is where descriptions (adjectives) like “boring,” “fun,” “long,” “rich” and “bright” land.

In Korean, the subject markers are 이 and 가. They’re placed immediately after the noun.

Notice how they immediately follow the subjects in these sentence examples:

You’ll see and hear these subject markers over and over in Korean sentences unless the subject is skipped.

We’ve said before that Korean particles tell you the function of a noun in the sentence.

This time, we look into object markers—which are placed after the object of the sentence.

In grammar, the object of the sentence is the thing that’s being acted upon. The verb is applied to the object.

So if there’s kicking going on, a ball might be the object of it. If there’s pizza (the object in a sentence like “I ate the pizza.”), it will definitely be eaten.

을 and 를 are our object markers.

을 is used when the preceding noun ends with a consonant, and 를 follows a noun that ends with a vowel.

Topic Markers vs. Subject Markers: When to Use Each

Now, you might be asking, “There seems to be a lot of overlap between topic markers and subject markers. How do I know which one to use?”

Topic markers and subject markers look very similar, and you see both of them tagging along with the noun that opens the sentence. But there are a couple of important differences between them:

1. A topic marker implies contrast, while a subject marker doesn’t.

If you say that “The earrings are expensive” with a topic marker, you’re implying that something else isn’t expensive.

A subject marker doesn’t have these extra implications.

When you say 귀걸이가 비싸다 (The earrings are expensive), you’re really just saying that and nothing else. You’re not alluding to something else being not expensive. This is the biggest difference between the two.

In a sentence like, “I ate the pizza,” using topic and subject markers might put the focus on slightly different things.

In the first statement, using the topic marker will emphasize the verb or the action that took place.

What happened to the pizza? I ate it.

I didn’t keep it in the fridge, I didn’t throw it away, I ate it instead.

In the second statement, when using the subject marker, the emphasis is placed on the subject—the person who did the eating.

What You Need to Know About Korean Sentences

1. The subject can sometimes be removed.

In Korean, some sentences don’t have a subject.

But you’ll quickly realize that this doesn’t pose any communication problems whatsoever.

Koreans rely more on the power of context in their speech. This is because Korean is a high-context language. You don’t really need a subject to understand what a sentence is about.

So don’t worry if the subject, or any other element, is missing. The context will always help you out.

A Korean older brother tells the younger, “문 닫아!” (shut the door). There’s no explicit subject in the sentence, but the context tells everything the younger brother needed.

Because Korean is a high-context language, questions can also be easily answered even if they’re phrased very vaguely.

In the end, all you need to understand is the context of a Korean sentence to discern its true meaning—even without a subject.

This will sound strange to English speakers because we know that “adjectives” and “verbs” clearly belong to different categories or classes. Heck, they’re different parts of speech—one describes a noun, the other is an action word.

But in Korean, “adjectives” fall under the rubric of “verbs.”

Because Korean adjectives are considered verbs, you’ll handle them the same way—you conjugate them.

Conjugation is when you transform a verb to make it agree with the tense, number, mood or voice of the sentence:

And of course, verbs in Korean are also conjugated:

For example, we have the verb “run.”

That’s what conjugation is all about.

It’s really just playing around with verb forms to give the word slightly different meanings.

3. Verbs are at the end of sentences.

In Korean, sentence endings are really where it’s at. They’re loaded with meaning.

Besides marking politeness level or formality, there’s so much information left at the tail-end of Korean sentences. You’re really going to have to wait ‘til the end before you know what the sentence is about.

They’re the most important part, and they hang around at the end of sentences.

Korean statements usually open with the “subject,” followed by the “object.” Think of them like they’re the cast of characters in a story. They’re introduced early. But what happens between them is revealed at the end.

The cat ate the rat.

In Korean, it would be more along the lines of:

All Korean sentences end with verbs (or verb-like forms).

Because the verb gives meaning to a sentence, it’s pretty important to pay attention to how a sentence wraps up.

Korean sentences, by having the most important part at the end, have this kind of feel:

Your voice is kind of nice… not!

I wasn’t mad at you… at first.

Think baby Yoda, but with the fatal moves of Blackpink.

How to Master Korean Sentence Structure and Particles

While this guide gives you a great headstart on your road to Korean mastery, you won’t ever become fluent in the language without exposing yourself to it.

The best way to master what you’ve learned is by hearing it used in real life.

Guides like this will only take you so far—that’s why there’s no substitution for having conversations with Korean people and enjoying Korean media.

One resource for this would be FluentU’s Korean program, which allows you to absorb sentence patterns, grammar, and vocabulary naturally through watching authentic Korean videos. Each video has interactive subtitles that act as an automatic dictionary: 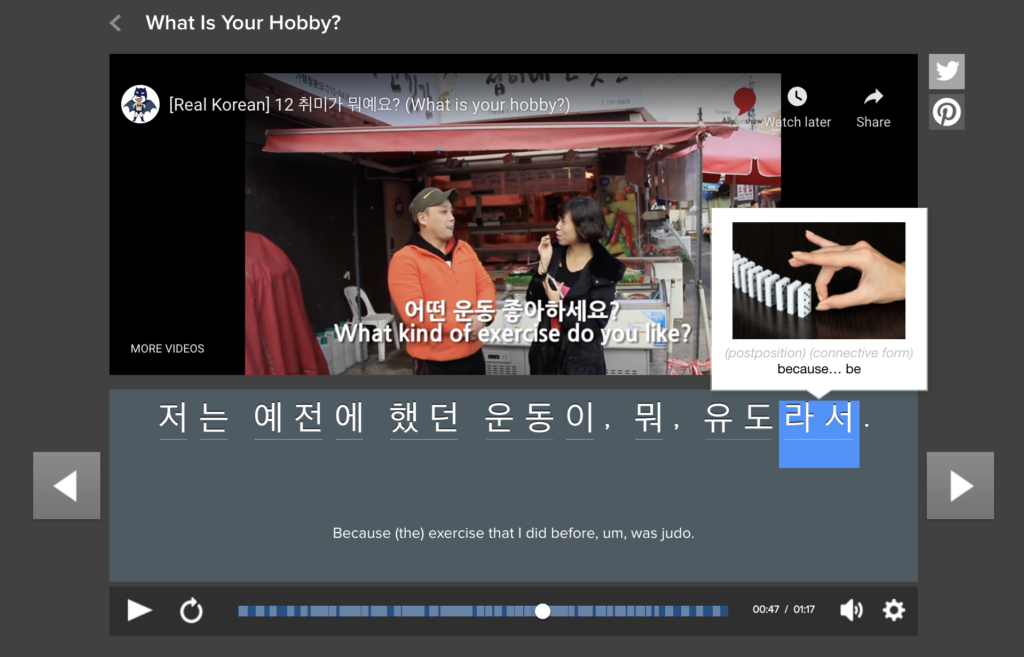 You can also see other clips where a word is used, make flashcards just by clicking a word, or take post-video quizzes that include speaking exercises. Since the language behind every line is explained, you’ll be able to really get comfortable with Korean sentence structure.

FluentU has a web app plus an Android and iOS app.

We learned a couple of things today.

We learned about the three most common sentence structures and three Korean particles. With these simple Korean sentence patterns, you can say what you want and mean it.