Italian Dialects: Everything You’ve Ever Wanted to Know (and Then Some)

It’s fine if you alight in Naples and can order a pizza in flawless Italian.

But to really impress your friends, you’ll need to order a real local specialty like the octopus in broth, and you’ll have to do it in the Neapolitan language: o’ bror’ e purp’.

In this overview, I’ll discuss major considerations for travelers to Italy, some languages (or dialects) to be aware of and a few phrases in Sicilian and Neapolitan that you’ll find useful if you’re ever in the area.

Italy is home to 28 indigenous languages (and six non-indigenous) according to the count by Ethnologue.

That’s right, those are languages, not dialects. Italians usually—and rather erroneously, in the eyes of many linguists—refer to Neapolitan and the others as i dialetti (the dialects).

So if Italians don’t respect their own languages enough to even call them languages, why should you, the non-Italian visitor, bother learning any of them?

One great reason is that they’re an incredibly fun challenge!

There are tons of resources out there to hold your hand through everything from your first steps in standard Italian to advanced, dastardly grammar. But it’s so much more interesting (and satisfying) to piece together the verb conjugations of Neapolitan, for example.

Don’t believe me? Just try to conjugate the verb “to be” in Neapolitan as pillow talk—personally, I don’t think I’ve ever done anything more grammatically thrilling.

And then there’s the wisdom and enthusiasm one gets from speaking to people in an ultra-local language. If language is a window into a culture, then imagine how much more you’ll see from peering into a more homey, familial, unofficial and regional language.

What Learners Should Know About the Many Languages of Italy

So, back to those 28 languages.

Italians’ use of the term “dialects” reinforces that these are not written down or taught, and are thus seen as somehow less than a “real language.”

The difference between dialects and languages

So what’s the actual difference between a language and a dialect? There isn’t one, really.

“Dialect” is more of a political designation than a linguistic category: It’s used to show which languages (and therefore speakers) a government/society chooses to empower and how.

Most linguists avoid the whole question, but when they do dare to distinguish the two, it’s usually concerning levels of mutual intelligibility, which is itself a fraught concept.

That is, they have the same root as languages descended from Latin, and some speakers could make themselves understood to each other in certain situations. However, there are enough grammar and vocabulary differences to cause plenty of problems in understanding.

Most of the languages of Italy are Romance languages, meaning that they developed in parallel to Italian out of Common Latin (as did French, Spanish, Portuguese, etc.). They didn’t develop from Italian.

There are also non-Romance languages in Italy, including some from the Slavic, Germanic and Albanian families.

Some European Romance languages like Italian have risen to the top (based on what royals spoke, who’s had political power, etc.) and were then written down and taught in schools.

Meanwhile, many more have languished—but there’s no intrinsic grammar or linguistic reason that Italian is more of a language than Neapolitan.

The fluidity of languages

Without the formal standardization that education and writing bring to a language, it can be complicated and controversial to separate out exactly where one language ends and another begins.

For example, as you travel through southern Italy, where does Neapolitan end and Calabrian begin? And where does Calabrian end and Sicilian begin? Some people have very strong opinions on these questions, but there’s hardly a consensus.

And in fact, there’s a sort of continuum, with each town and family speaking its own version.

The failure to formalize these languages also means that you, as someone learning them, may encounter many different versions of what various locals consider “correct.”

But hey, that’s all part of the fun.

One incredibly important thing to keep in mind as you learn various Italian dialects is that almost nobody else—including Italians themselves—makes a concerted effort to do so. People will think you’re fun and crazy, but they may also, in certain cases, take offense.

For example, older locals in the region of Bari may not feel great about the fact that they speak what they themselves consider to be a backward, provincial “dialect,” and your attempt to speak the language to them is likely to come off as making fun of them, no matter how far that is from the truth.

One more piece of advice: Don’t just learn curse words! I know, dears, it’s titillating, but there’s so much more you can do!

When I plunge into a new language, I always endeavor to learn the words and phrases that reveal something about cultural attitudes (for examples, see the last two sections of this post) as well as a few words for local dishes. These are ultimately far more useful and rewarding. 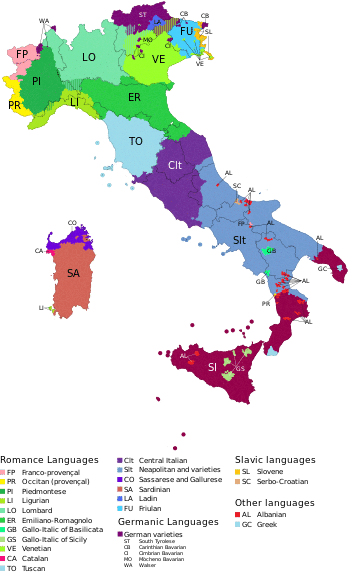 The 5 Main Italian Dialects to Be Aware Of

While it would be beyond the scope of this article to list every single language spoken in Italy, below are a few of the more important/interesting ones to consider as a traveler.

All of these can vary quite a bit in terms of grammar and vocabulary as you go from town to town or even from neighborhood to neighborhood.

Variants of this language are spoken across much of southern Italy.

Thanks to a one-time Spanish hold over the place, there are plenty of Spanish loanwords in the language that may sound familiar to some travelers.

This is spoken, in various versions, on the island of Sicily. It also exists as a variant in southern Calabria.

This is spoken in Friuli in northeastern Italy.

Barcelona’s infamous language is spoken in Alghero (Sardinia), which was once a part of the Catalan kingdom.

It is, in my personal opinion, very mutually intelligible with Occitan, which is still spoken a bit in the northwest of Italy.

Spoken across most of the middle and south of Sardinia.

A Smidge of Neapolitan for Foreigners

Neapolitan is fun to learn because it’s still spoken often and spoken proudly, even by young people.

Here are a few of the phrases that I enjoy. Be aware that spelling varies quite a bit.

Azz! — This is a corollary to the Italian cazzo (the male genitals) and is used as a very common expression of surprise, dismay, or delight.

Nun sacc’ niente. — I know nothing. (It’s always wise to know at least one humble expression of defeat in any language.)

Liev’t a miezz’! — Get out of the middle! (Said to other drivers on Naples’ chaotic, deadly streets.)

A Dash of Sicilian for Foreigners

Sicilian is similarly fun to learn and speak and varies quite a bit across the island. Its spelling is also not fixed.

Auguri e figghi masculi! — Congratulations, and male children! (This is a typical toast that’s been borrowed from weddings and is now used everywhere.)

Paninu ca meusa. — Sandwich with spleens. (Don’t miss this delicacy! If you go to Palermo, eat it at the port.)

How to Learn Italian Dialects

The above phrases are just intended to give you a taste fun local phrases and words from various parts of the country.

You can learn more by asking people for their wisdom, especially older folks who are more likely to speak these languages better.

In some cases, there are written bilingual dictionaries with Italian, such as for Neapolitan and for Sicilian.

I’ve found that the few learning guides for the languages of Italy (like the one on Omniglot and I love Sicilies for Sicilian) are of limited use. They’re generally directed to Italians who grew up hearing their grandparents speak and are trying to belatedly brush up their skills. They’re less useful if you’re just starting out from zero.

You can also practice listening to the various Italian dialects with authentic Italian videos on the FluentU program. If you have trouble understanding the pronunciation or speech, you can toggle on interactive captions in Italian or English (or both), while you watch.

If you’re learning a language that’s widely spoken outside of Italy, you’ll have more luck, naturally. (For instance, here’s an excellent resource for Catalan).

A much better way to learn is to search for web-based classes from Italian teachers on italki and narrow in on teachers coming from the regions that you’re interested in. Italki has over 5,000 teachers available to work one-on-one on your schedule, so you’re sure to find the perfect tutor for you there.

I’ve used this method successfully to locate teachers for both Neapolitan and Sicilian.

However you choose to continue, remember to have fun, as the lack of standardization can make it hard for anyone to really say what’s “correct” in most of these languages.

But whether you’re just out to learn a few phrases, or are hoping for a lifetime of pillow talk with a Neapolitan, you’ll certainly find that learning any of these Italian dialects is worth it.