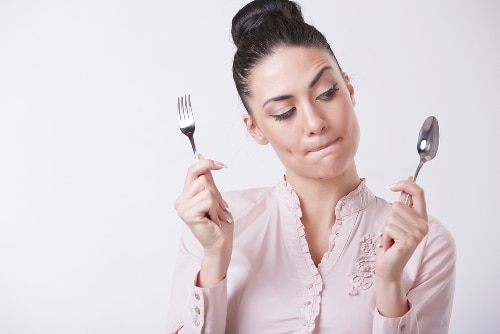 Ever wonder why German silverware answers to three different pronouns?

Ever get frustrated that Mr. Spoon (der Löffel), Mrs. Fork (die Gabel) and their gender neutral friend the Right Honorable Dr. Knife (das Messer) just sit there in front of you before every meal, mocking you for your lack of knowledge of German genders with their shiny, insulting faces?

Okay, maybe this isn’t a problem for you.

However, there’s no doubt that learning genders in German can be a frustrating experience at all levels of study, and the fork/knife/spoon example is just one of thousands of instances of seemingly nonsensical gender distributions.

When the exasperated student looks up from their textbook with “but why??” written all over their face, sometimes the answer “just because” is sufficient. However, there comes a point—somewhere between beginner and intermediate learning—where being able to take rather educated guesses at the gender of a noun you aren’t familiar with will make you sound far more sophisticated as a speaker.

It’s way better to take a stab at the gender rather than just mumbling your endings and articles, hoping no one notices. Trust me, they do.

So, here are a few tricks—“rules” if you will—that can help you determine which pronoun that unknown German noun uses, making you sound like an instant pro (and, not to mention, helping you avoid offending the sensibilities of your fork).

The best part: Unlike grammar “rules” in English, these almost always apply!

Keep in mind that I’ve used the word “probably” in these rules for a reason. The rules aren’t 100% true 100% of the time—they’ll just give you an idea of the predominant gender patterns in the German language. Odds are, the rules will apply to the German noun you’re considering.

The noun is probably masculine if…

2. It’s a day of the week, a month or a season: Freitag, (Friday), April (April), der Sommer (summer). However, note that the word die Jahreszeit (season) is feminine.

Note that the -er thing only works because the word describes an agent of an action derived from a verb. Otherwise you get words like “die Mutter” (mother), which fall into the “words that are always feminine” category. German is hard.

There are a lot of exceptions to this rule, but it’s still worth memorizing since 90% of the time it’s accurate.

Some of the most common exceptions for -er are: das Fenster (window) das Messer (knife) and das Zimmer (room). For -el there are also some exceptions, including: die Regel (rule), die Mandel (almond) and die Siegel (seal).

5. It’s a foreign word with the emphasis on the last syllable: der Soldat (soldier), der Sekritär (secretary). Exceptions: There are a handful, but two more common ones are: das Café (café), die Saison (season—but not the meteorological kind, more like how it’s used in the sentence, “it’s asparagus season.”)

The noun is probably feminine if…

1. It refers to an actual female person: die Mutter (mother), die Tochter (daughter). This does not work when the female person is a little girl, but we’ll get to this in a second.

4. It ends in -in and identifies a female in a profession: die Kommissarin (inspector), die Architektin (architect).

5. It ends in -e: die Ecke (corner), die Seuche (edpidemic). Exceptions: There are quite a few. Some animals, like der Löwe (lion) and der Hase (rabbit), also der Name (name), das Ende (end) and some nouns that begin with ge- like das Gebäude (building).

6. It ends in -a: die Kamera (camera), die Cola (cola). Exceptions: There’s currently a debate raging in Germany as to whether it’s die Nutella or das Nutella. As Nutella is a product that enjoys incredible popularity, this debate is, obviously, extremely heated. I will slather it on my toast regardless.

Exceptions: Despite this rule, the words das Ei (egg) and der Schaft (shaft) are neuter and masculine respectively. Why, German?! Why?? Other Exceptions: das Knie (knee), der Tanz (dance) and der Schwanz (tail…but it also has another meaning…) and der Flur (hallway).

The noun is probably neutral if…

3. It begins with Ge- (remember das Gebäude?): das Gehirn (brain), das Gebirge (mountain range). Exceptions: Most of the exceptions will be feminine, like: die Geschichte (story/history), but there’s one masculine one: der Gebrauch (use/application).

This year on April Fool’s Day the German news giant Deutsche Welle published an article claiming that the “Commission for the Reform of German Language” had officially decided to do away with silly elements of German grammar such as genders and cases. (This comes about twenty years after a very real German spelling reform that was highly controversial at the time.)

The fictional article mentions the reaction from the German chancellor (a positive one) as well as from educators of German language (a negative one). The real reactions of those who were tricked into taking the article seriously were, hilariously, mixed.

The majority of readers thought the idea preposterous, of course. However, there was a small group that seemed absolutely fine with the proposed changes! Unfortunately, don’t get your hopes up. It took the English language hundreds of years and four or five massive grammatical shifts to do away with our genders and cases (yep, we had them once!).

Thus it is as my German teacher once said, “I’m afraid you’re just a couple thousand years too early. Get memorizing.”

So, next time you find yourself in the middle of a German sentence, struggling for the ending that will make you sound like a natural, think about the noun in question and see if any signal endings occur to you.

Got nothing? Then think about the meaning of the noun and see if anything occurs to you.

Still nothing? Well, at this point I think you’ve done your due diligence (and you might start to worry those around you with your sudden and inexplicable thought-pause) so give it a guess. But remember, remember, remember these gender rules for the next time!