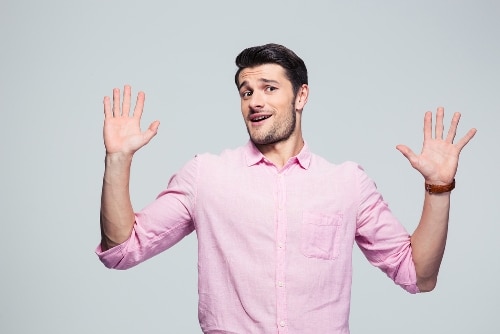 If a French man puts his fist in front of his nose and turns it like he’s revving a motorcycle, do you know what he’s trying to tell you?

Yes, spoken French and strange noises aren’t all you need to have conversations in the language—you’re going to need a lot of gestures as well.

And don’t for a minute think you can get by with the same ones as you would in your own language! Non, non, non !

French of course has its very own lexicon of gestures, and yes, they impart meaning. Mastering them is key to being a fluent French speaker—and for beginners, doing so is a great way to appear much more fluent than you actually are.

In this post, I’m laying down the 12 most useful gestures that I’ve found for speaking and understanding real French. (That nose-twisting gesture? See number 4 below.) Peppering them into your conversation will make you much more convincingly fluent, but I have to say, they’re also just ridiculously fun.

What follows are my recommendations for the average French learner; I’ve focused on the most common and useful gestures that are also the most different from what Anglophones may be used to.

1. The Absolutely Nothing Gesture

If somebody asks you if you have any sugar, books, money—any of material thing, really—you can say que dalle (absolutely zilch), or you can just bite your thumb and flick it outwards. It’s rather emphatic, and so could be taken as a bit rude. (If you do have some of the thing, then don’t use the gesture! Nod instead and say oui.)

You can’t have a proper French conversation without being disgusted or disdainful. Pucker your lips, narrow your eyes and look bored—the result should be something like this.

For example, just this morning, I made a huge American breakfast for three French girls. “Wouldn’t you like some ketchup on your hash browns?” I said. “Mmmmmm, ketchup!” One of the French girls narrowed her eyes and made exactly this face; another went to fetch the pains au chocolat (chocolate croissants).

Show just how young and awesome you are—and how much you have just won and someone else has lost out—with a diagonal chop of the hand as you shout “cassé!” (literally, broken). The gesture was popularized by the film “Brice de Nice” and by TV sketches with the same character.

I’ll let Brice himself demonstrate the particularities of getting the gesture just right:

In spite of such incredibly stupid origins, and being now a bit passé, the gesture is still used today. It is especially used to show that either you, someone next to you, or someone you’re speaking about has humiliated himself.

In many cultures, we lift an imaginary bottle to our lips to indicate that someone else is drunk. In France, we can do that too, but the truly French way is to raise your fist in front of your nose and twist it like you’re rev-ing a motorcycle.

The expression that can accompany this gesture of drunkenness is il a un coup dans le nez (literally, “he has a drink in the nose”). The gesture may help you remember the phrase and vice versa.

Note that the gentleman above tilts his head slightly in the direction opposite to the twisting in order to provide more emphasis. When performed in real life, however, the gesture should be accompanied with a lot of laughing, rib-poking, etc. For obvious reasons, try to remember not to perform the gesture with the same hand bearing your drink.

Hilariously for such a peculiar gesture, young people leaving French-speaking lands for the first time are often shocked when they discover that twisting at their noses is meaningless in other cultures.

To show that you just don’t know, raise your hands to shoulder height. For an oddly cute demonstration, see this video at 0:29.

I employ this gesture when I don’t understand someone, or I haven’t been listening, but I can tell from the upward inflection that I’ve just been asked something. It doesn’t make me seem any smarter, but it does make me at least look like a fluent French speaker.

This is a bit more Italian than French (after all, it expresses positivity and enthusiasm), but the French do actually use it, particularly in reference to food, drink, or a job well done. Kiss your fingers, spread them outwards, and say magnifique (fabulous).

To show that you’re suspicious or that you think that the person you are addressing may be lying, put one finger on your eyelid and pull it down a little bit, as demonstrated in the video below (it should launch right at 1:54—if not, skip to there).

The accompanying phrase is mon œil (my eye). I’m not sure where this nice girl learned English, but where I come from the equivalent expression is “my a**,” not “my foot.”

This gesture is very common. If it helps you to remember, you can think of it as a way of showing that you see through someone’s lies. Has a beautiful French woman just told you that she’ll love you forever and ever, in spite of your foibles and farts? Put your finger on your lower eyelid, and pull down.

While we’re signaling at our faces, the j’ai du nez (I’ve got a nose for it) gesture is a bit similar. More informally, the accompanying expression is j’ai du pif. It’s demonstrated at 2:22 in the video just above, and it means that the speaker thinks she is clever, she gets it, or she has a talent for the subject at hand.

Tap one side of your nose with your index finger, and then brag about whatever you think you have a flair for.

Obviously, the danger referred to in most daily conversations is rather low-key. Has the coffee been served too hot? Is your mother coming to visit? Break out this gesture.

This is probably the least commonly used gesture in this list, but it’s one that I happen to like and find useful. To show that someone is annoying or boring, you can say quelle barbe (what a beard) and stroke your jowls with the back of your fingers.

It is more likely to be used by parents of young children or in professional environments where people feel inhibited from using the more vulgar words that they would usually use to describe such a person. According to some speakers, it reflects the scraping irritation of les bises (kissed greetings) with someone who has an itchy short beard.

This gesture is unbelievably useful; if you learn just one thing from this post I hope that this is it. You’ll particularly want to deploy this gesture at the end of a night out when you need to signal to a companion, perhaps discretely in the middle of some situation, that you really think it’s time to head out.

To do it, slap the back of one hand with the other hand. You’ll also see people hit the back of their hands, knock their wrists together, or chop the sides of their hands together. It’s pretty informal, so use it with care if you’re in a professional setting.

While similar to the loopy-head gesture that Americans make, the French version is different enough to bear mentioning. To do it, you should tap the side of your head to indicate that someone is nuts (I’ve noticed that Russians do this too, by the way).

Or—and this is the funner version—you can touch the side of your head with your index finger and twist, like you’re screwing out your brains. Here are pictures of both versions. These are the possible phrases to accompany it:

There are of course many, many other ways that we flail when speaking French, but these are the most key to typical conversations. If you’re not careful, after a while some of them will creep into your English!

Enjoy these, and keep on the lookout for new ones as you speak to French people; gestures pop into and out of general use all of the time. Happy gesticulating!

Want to see these all these French gestures for yourself—and pick up authentic language skills while you’re at it?

Then you’ve gotta know about FluentU. FluentU provides real-world French videos, like movie trailers, funny YouTube clips, music videos and more, which have been transformed into a language learning experience.

Each video comes with interactive subtitles—click any word for an instant definition, translation and native pronunciation. FluentU will also show you other videos that use the word.

For example, tapping on the word “suit” will show you the following:

FluentU’s Learn Mode then creates flashcards and exercises for every video, to make sure you remember what you’ve watched. The videos are organized by genre and learning level so it’s easy to find something that works for you, and FluentU also personalizes the experience by suggesting new videos based on your learning history.

Best of all, you can take this immersive French practice everywhere you go, with the mobile apps for iOS and Android.

Mose Hayward is a polyglot and has lived in Paris for more than a decade. He blogs about “20-minute fluency,” dancing and romantic adventures for travelers at TipsyPilgrim.com.