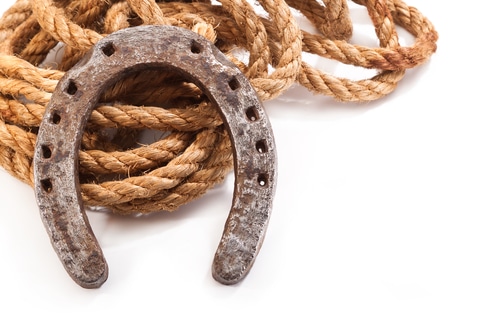 ESL Vocabulary: The Language of Luck

What do horseshoes, the number seven, and pots of gold all have in common?

Well, in the English language at least.

Every language and culture has superstitions to push out the bad and bring in the good; English is no different.

Traditions change over time, so we don’t know where all lucky phrases and idioms come from. We just want all the luck we can find! So say hello to the language of luck. 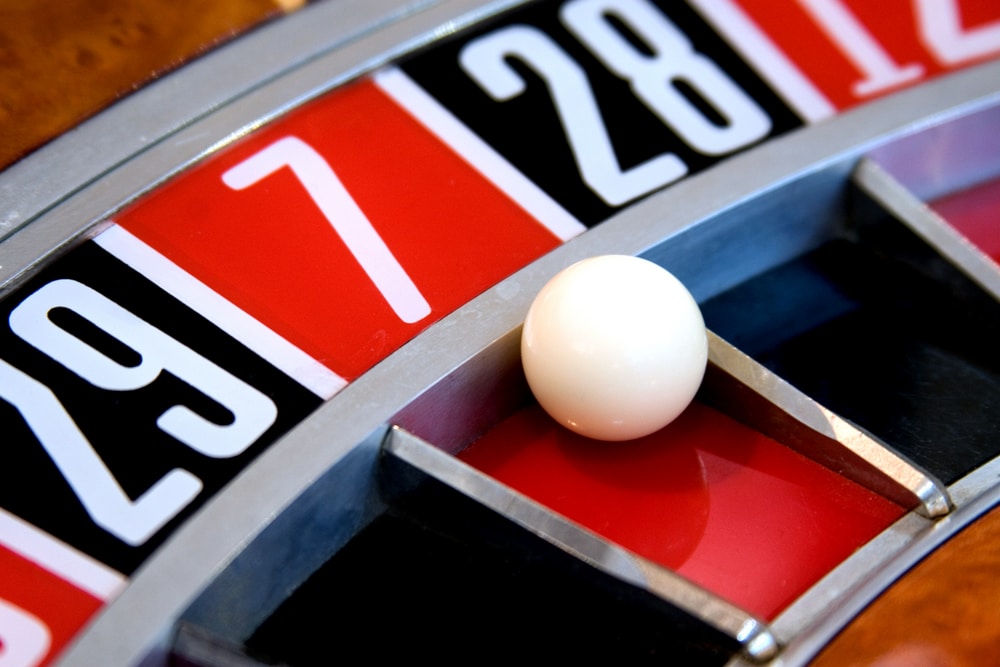 Everyone from gamblers (people who bet money, usually at casinos) to the very religious considers the number seven to be lucky. “Lucky 7” has been a part of Western culture for centuries.

Different religions also have some lucky sevens. The Greeks and Romans believed there were seven gods and goddesses. Islam has seven holy temples. The Hebrew Bible says the world was created in seven days. The Christian New Testament describes the end of the world with seven plagues (deadly diseases) and seven angels.

You will sometimes hear English speakers talk about “all the way to seventh heaven.” That means the highest level of good fortune or good life.

Gamblers consider seven to be very lucky if they are playing on slot machines (a casino game). Three sevens in row means a blackjack (21) and a big money win. “Luck of the draw” means that your good luck comes from chance, not any skill.

Card players sometimes talk about “Lady Luck,” a symbol of games going well for them. She is always pictured with dice-shaped earrings showing the number seven. 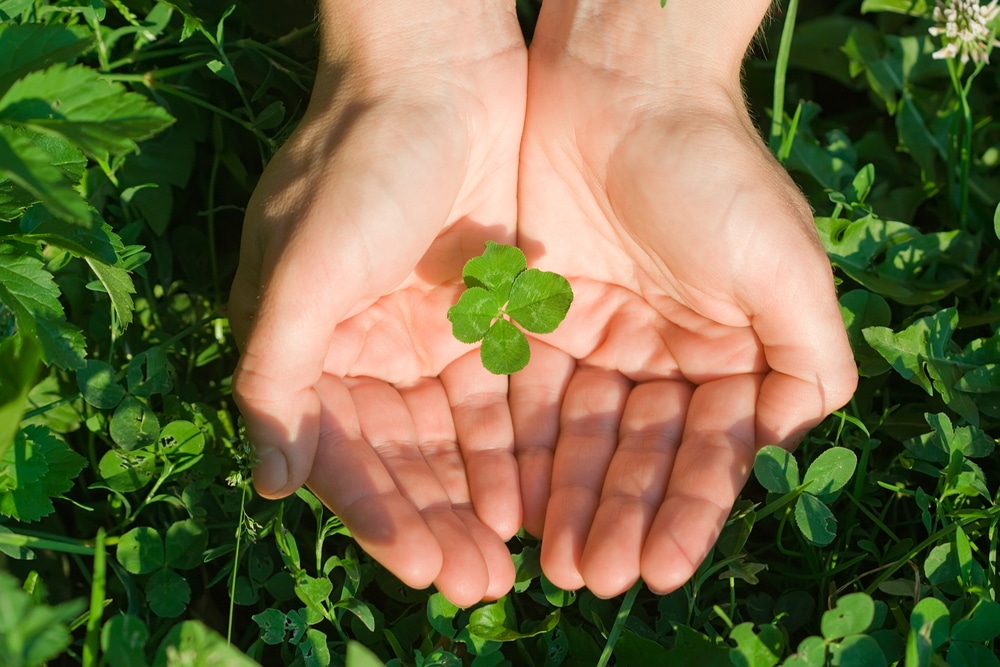 Around St. Patrick’s Day in English-speaking countries, you will see lots of leprechauns, little red-haired men dressed in green. Well, maybe not real leprechauns, but paper pictures will be everywhere.

Leprechauns are said to be “looking for a pot of gold at the end of the rainbow.” That phrase is where idioms such as “chasing the rainbow” and “pot of gold” come from.  They’re about hoping for a better life, sometimes unrealistically.

You also will hear about “the luck of the Irish.” That is an old superstition that Irish people (from Ireland) have more luck than others, partly because they have one of the most popular symbols of luck: the four-leaf clover.

The Irish say their island has more four-leaf clovers than anywhere else in the world. Clovers grow all around the globe, but the lucky charm four-leaf version does come from ancient Ireland.

Children in the Middle Ages looked for four-leaf clovers in meadows and gardens, thinking they might see a fairy nearby.

However, you can increase your chances at “the luck of the Irish” by growing four-leaf clovers. Find a patch with many clovers, dig them up by the roots, and transport them to your own garden.

A horseshoe hung over the door in the front of a house collects all the good luck passing by. Make sure the ends of the horseshoe are pointing up, or else the good luck will fall out.

Sailors even hang horseshoes in their ships to bring good luck.

Horseshoes are made of iron, and there are many superstitions about that metal. Iron is super strong and can withstand fire.

Even the blacksmiths who make the horseshoes are considered magical because they bend iron with fire. In ancient times, blacksmiths performed wedding ceremonies because they were thought to bring the bride and groom good luck.

A popular blacksmith idiom is “Strike while the iron is hot.“ That means take your chance while you have the opportunity because you don’t know if your luck will be good later. Iron can only be bent while it is hot, not after it has cooled. 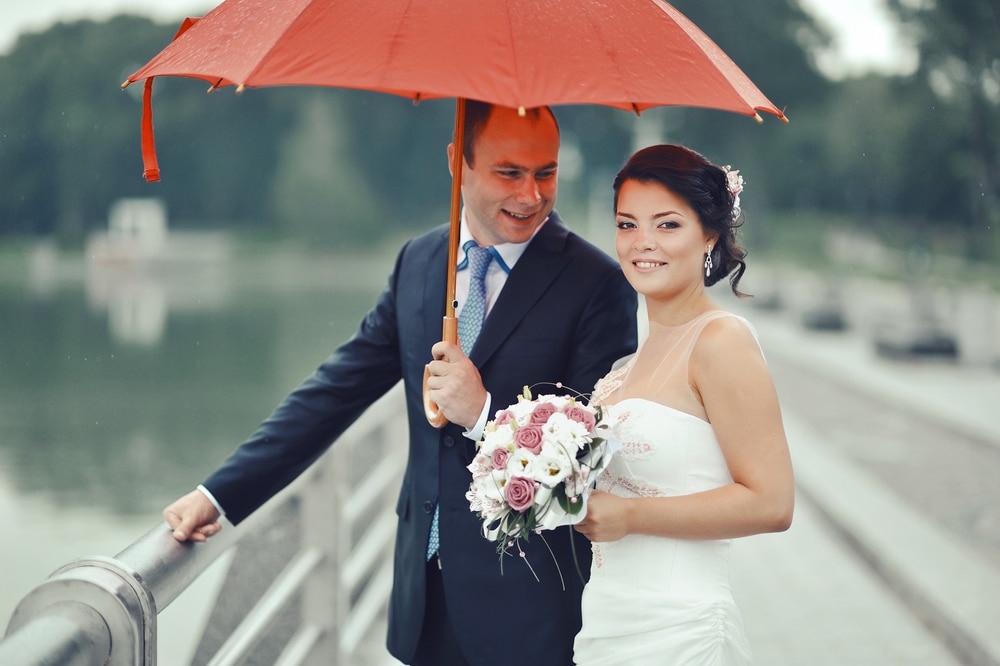 Some people think that a good wedding day means a happy future for the couple. There are lots of tricks and phrases to get the best good luck on one’s wedding day.

A bride who is marrying a wealthy (rich) man is said to be “sitting pretty.” She has time to relax and make herself beautiful. Anybody who has a time to enjoy their good fortune is described as sitting pretty.

Rain can bring good or bad luck on a wedding day, depending on the tradition. Some European traditions say rain is a blessing that washes away all bad things. Others consider rain bad luck because it messes up outdoor wedding plans. Another saying is “Happy is the bride whom the sun shines upon.”

Here’s a great story or “old wives” tale: People in the southern United States sometimes bury (put in the ground) a bottle of bourbon (whiskey) a month before the wedding to prevent rain and bring good luck. “To bury the bourbon” means to do something to make your luck better.

Even leaving the wedding includes lots of superstitions. English Tudor tradition says that you should throw shoes at the bride and groom as they leave the church. Now, people just tie old shoes to back of the car in which the newlyweds leave the wedding.

Romans believed wheat was a symbol of fertility (able to have lots of babies), so all sorts of wheat grains were included in the wedding ceremony.  The Hebrew Bible describes the harvest as “separating the wheat from the chaff,” meaning separating the good from the bad.

Happy couples wanted good things, but often wheat was expensive. So Americans started to throw rice (a cheaper grain) at the bride and groom for good luck after a wedding.

That tradition has mostly gone away because rice is hard to clean up after the wedding. Americans now throw seeds, blow bubbles, and light sparklers instead. 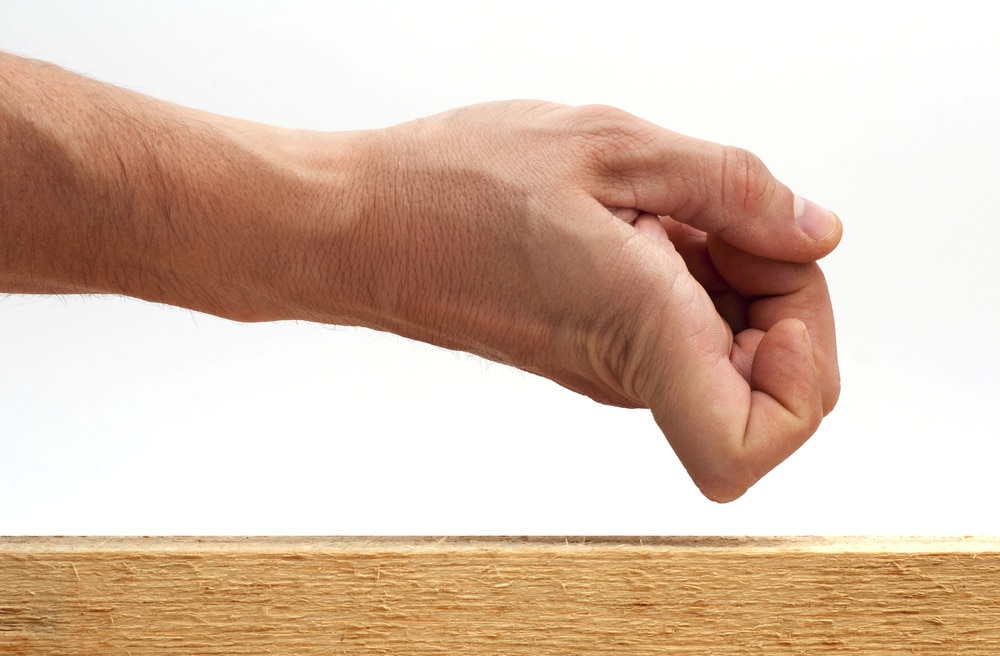 This idiom about good luck is a little complicated, but it’s one you will hear often.

Let’s say you believe you did really well on a test, or that your boss is going to give you more money. You are with friends and say: “Good things are coming my way.”

That’s when you realize you may cause something bad by presuming (believing when you don’t know for sure) that you will have good luck.

Just as soon as finish your boast, you quickly add, “Knock on wood.” Then, you find something made of wood (often a table or chair nearby) and tap your knuckles on it, like how you knock on a door.

Yes, English speakers really do knock on wood. Now, you will know what it means when you hear it.

So whether you are cheering for your favorite football team or just need some good fortune, try out these lucky phrases and bring a little English language luck your way!