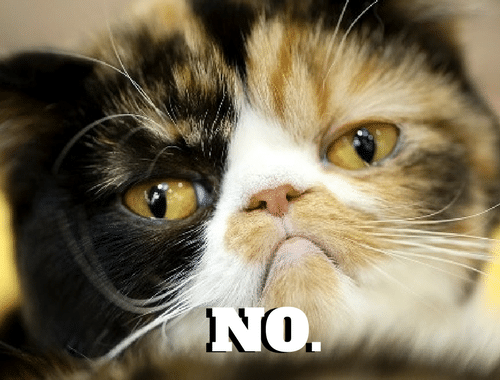 How to Say No in Chinese: Denying, Declining, Rejecting and Denouncing

There are also the colloquial variations, such as “nah” and “nope,” and some indirect forms like “we’ll see” and “maybe some other time.”

But at the root of it all, the absolute word that conveys the message of all these phrases, is a two-letter word.

It’s the powerful little word that we use to express dislikes and correct people when they haven’t gotten their facts straight.

English is wonderfully but painfully complex, with about a hundred unique ways of giving negative responses as well as positive ones.

However, we can take comfort in the fact that the only word we really need to know to reject an idea is a simple “no.” Short and sweet, it’s an important word to know, useful in a variety of scenarios with many different applications.

When we’re learning a new language like Chinese, we search for the equivalents of our everyday speech. “Yes” and “no” (along with other useful phrases) are some of the first words we encounter in the early stages of learning. When it comes to translating a simple word like “no,” it should be pretty straightforward.

Or so you would think.

How to Say No in Chinese

What’s simple in English is rarely the same in Chinese (and vice versa).

Thus, there’s no such thing as a single Chinese character that would equate to the English understanding of “no,” although English-Chinese dictionaries will indicate otherwise.

Before you freak out and scream, “Chinese is way too complicated!” remember this: Chinese is logical, and each character is used in specific circumstances.

There are numerous instances where English is too vague for it to be translated into a language of precisely-categorized cultural concepts.

Think about it. How many times has someone said, “no” to you with nothing to follow it up, inciting you to reply with, “what do you mean, no?” The same would apply to a situation where an English speaker asks for the Chinese translation for “no,” and the native Chinese speaker replies, “no to what, exactly?” Elaboration is necessary.

The Problem with Dictionary Translations

Even with all things considered, English-Chinese dictionaries still need to put something down for “no,” so then they end up filling in the blank with 不 (bù) or 不是 (bù shì). Though these are technically correct, let’s talk about why both translations are not sufficient.

1. 不 (bù) is more closely translated to “not,” and is often paired with a verb to create the antonym.

Sometimes, 不 (bù) can manifest on its own when someone is using “no” in a similar manner as some common Chinese interjections. And in order to give a negative answer to a question, you either add 不 (bù) or 没 (méi) to the verb to negate it, with the literal translation of the phrase being “not + verb” in the original question.

It sucks that there isn’t one character that can be used the same way we use “no” in English, but that’s just the reality of the situation. At least you you understand now why there isn’t a simple Chinese equivalent of this seemingly simple negative answer.

“No” turns into two or three characters in Chinese, and the characters used will vary according to the context. There are an unlimited number of ways of saying no, and though that complicates the language and sometimes confuses learners, it does make the language that much more interesting.

No more stalling. Let’s get right to all the many ways that you can be saying no in Chinese.

Saying No to Descriptive Questions

There are tons of different questions you can ask in Chinese, but the ones we will be exploring today are the basic yes/no questions. As previously shared, 是 (shì) means “to be,” and when used in that yes/no question form, it’s an inquiry on a description. Here’s an example:

Alternatively, if the second speaker wanted to say yes to the questions, he could just say 是 (shì), literally translating to “I am.” Because he’s not Thai, he answered negatively with 不是 (bù shì), meaning “I am not” by extension.

There are times that you might be asked a question containing the phrase 是不是 (shì bù shì) which means, “Isn’t it?”

This is a useful term to know for everyday speech, and of course, it’s another instance where you would potentially answer “no.”

As you can see, questions that have the word 是 (shì) elicit the yes/no answers 是/不是 (shì/bù shì).

Just keep in mind that this is the dictionary default definition, and should not be considered the universal translation for “no.”

Another reason why you might say “no” to someone is when you’re pointing out that that person is wrong.

The alternatives of saying “no” to such false statements would be “incorrect,” “false” or “wrong,” which in Chinese would be 不对 (bù duì) or 错 (cuò).

As you can see, when you want to indicate that a statement is wrong, 不对 (bù duì) or 错 (cuò) can be used interchangeably, but take note that the latter is generally considered slightly rude.

Answering No to Clarifications

On the other hand, if someone is asking for clarification, then the appropriate “no” answer would be 不对 (bù duì).

One way an individual would double check their facts is by asking questions like, “Is that correct?” “Am I right?” or simply “Right?” which in Chinese would be “对不对?” (duì bù duì?).

Literally meaning “right or wrong,” 对不对 (duì bù duì) is a helpful phrase for phone conversations and in general, to help you understand if you’ve got your information right.

You might see 对不对 (duì bù duì) in other variations, like 对吗 (duì ma) or 对吧 (duì ba).

Just know that they all mean “right?” and all require a yes/no or 对/不对 (duì/bù duì) response.

Unfortunately, it’s not always going to be that grammatically convenient.

In the pattern you have noticed so far, the phrasing for your yes/no answer is based on the verb used in the question. It’s not the same case for a yes/no answer if you’re using the 对/不对 (duì/bù duì) translation since 对 (duì) isn’t a verb.

Thus, the example above is the only time 对 (duì) would appear in a question.

Here’s a verbal exchange that would generate a yes/no reply:

Although the response of “不对” (bù duì) in this example is not blatantly as obvious as it was when the question was “对不对?” (duì bù duì?), the context demonstrates that the answer should be the Chinese equivalent of “correct/incorrect.”

Saying No Using “Have”

This one is pretty straightforward.

By now, you probably already know that 不 (bù) is used to negate most verbs, except for the verb “to have” or 有(yǒu), which is negated by 没 (méi).

没有 (méi yǒu), literally meaning “I don’t have,” is considered yet another way to say no to questions inquiring whether you have something in your possession or not.

Chinese doesn’t have auxiliary verbs like in English, but you can use 没有 (méi yǒu) to say that you haven’t done something.

Thus, “I haven’t” would be used as your negative answer.

Let’s face it, we’re not superhuman.

We can’t possibly be good at everything, so there’s no shame in letting people know that you don’t quite have the skills that their asking for.

Various translations come up for the verb “can,” but when expressing ability, the appropriate character is 会 (huì).

It’s important to remember that 会 (huì) refers to skill that must be learned and not just any ability.

This stands in contrast to 能 (néng) which also means “can,” relative to inherent physical ability.

You’ll understand this better when you encounter all the different Chinese variations of “can.”

Denying Requests and Refusing to Give Permission

We have covered one translation of “can” using 会 (huì).

When it comes to requests and permission, we would use modal verbs 可以 (kě yǐ) and 能 (néng) for “can” and “may,” depending on context, as per usual.

For the most part, when someone uses 能 (néng) in a question, the person is asking for permission.

People are always going to ask for favors, and we can’t always give in. After all, who wants to be a pushover?

If you want to deny a request or refuse to give permission, all it takes is a simple 不可以 (bù kě yǐ) or 不能 (bù néng), which are used interchangeably to mean “cannot,” “may not” or more plainly as “no.”

Here are a couple of examples, although try not to be as rude as these imaginary speakers.

Tip: If you still can’t figure out when it is appropriate to use each answer, just go with 不可以 (bù kě yǐ).

Some people are more comfortable using 可以 (kě yǐ) in conversations, as it is quite common in everyday situations like traveling, among others.

Sometimes, we like to embellish and exaggerate to add a bit of a dramatic effect to our speech. We can’t help it—we’re expressive creatures. There are times where a simple “no” just won’t do.

We know that 能 (néng) can mean either “may” or “can,” and it is used to request permission.

However, the character can also be used to ask about possibility, if there’s a chance that a certain event will happen, perhaps.

And if you want to say “no” to a question like, “Is it possible?” you would say 不能 (bù néng), meaning “impossible.”

Call it the superlative degree of “no,” if you will.

In case you were wondering, unlike most of the other examples that follow verb/不 (bù) + verb format for yes/no answers, 能 (néng) isn’t commonly used on its own.

You would just answer “yes (it is possible)” with 可以 (kě yǐ).

Curious about other ways to express impossibility? Here are a couple more terms you might want to use to deny any future request:

We let others know about what we want with 要 (yào).

On the flip side, if we dislike a certain something, we say 不喜欢 (bù xǐ huān).

And then when there’s something we don’t want, we say 不要 (bù yào).

Although we have gone through quite a number of ways to say no in Chinese, we still have a few that haven’t been mentioned yet. By now, you should know how to structure your yes/no questions and answers, so let’s just keep this part brief:

Despite how incredibly long this explanation is, saying no in Chinese is not as challenging as I might have made it out to be at the beginning. Here are the key takeaways:

But man, how convenient would it be for learners if the Chinese language had that single character for “no?”

Too bad life is never that easy.