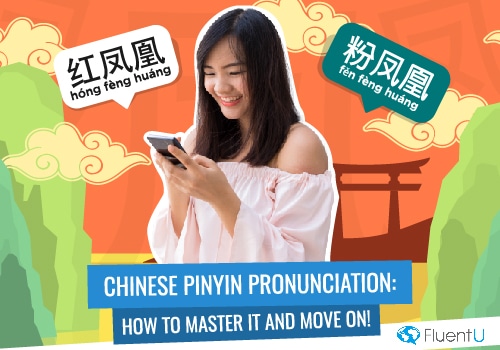 Afraid to try out your Chinese pronunciation?

Some say that Mandarin Chinese is so hard to learn.

They say the phonetic system pushes you so far from your comfort zone that it makes pronunciation a nightmare.

It’s true that the language has its obstacles, but is pronunciation really as big of a hurdle as people make it out to be?

Of course, the use of Roman letters in Chinese pinyin that don’t follow conventional English phonetics can seem problematic at first. But believe it or not, mastering the pinyin system is not as difficult a task as it might seem.

After a bit of studying, beginners usually find that pinyin pronunciation is quite easy, with the reality being that tones are where they trip up the most.

With the right attitude and a good work ethic, you’ll be nailing Chinese pinyin pronunciation in no time.

But before diving into strategies to better your pinyin pronunciation, let’s take a quick look at how hanyu pinyin came about.

From Zhuyin to Pinyin: A Brief History Lesson

Before hanyu pinyin was in place, a different Chinese alphabet system was used along with the Wade-Giles system, which was composed of modified Latin letters.

Known as zhuyin or colloquially as “bopomofo,” the system was replaced as the standard in 1958 by a new system, which we know as “hanyu pinyin” or simply as “pinyin.”

While zhuyin is still widely used in Taiwan, the switch to pinyin in China was significant for a couple of reasons: It systematized the language, which in turn standardized the language for Chinese people, as well as improved Chinese language learning for all.

Chinese Pinyin Pronunciation: How to Master It and Move On!

Learning and Reviewing Your Pinyin

Here’s the Chinese alphabet, divided into vowels and consonants.

When reciting the consonants, they’re attached with basic vowel sounds. So when you read them aloud, you’re really saying this in pinyin:

Remember that pinyin is not English, but if we were to compare that to the sounds of the English alphabet (for those with an American accent), the spelling of the pronunciation could look something like this:

It’s strange seeing the comparisons, isn’t it? What’s also pretty bizarre and interesting is how the same sound can be spelled in completely different ways across languages.

Now that we’ve gotten the more difficult sounds out of the way, let’s move on to the vowels.

an en in un ün

When reading these out loud, you’ll notice that they aren’t too far off the sounds of English letters based on American pronunciation, but here’s the comparison for your reference:

Comparing Pinyin with Your Own Pronunciation

One thing to also note is that spelling of English pronunciation will vary across different English speakers. What’s provided here is merely one way to interpret pinyin. These Americanized spellings may apply to you, but either way, you’ll want to listen to the audio clips from this chart so that you understand them in terms of the sounds that are familiar to you.

For some, this side-by-side pronunciation comparison is enough to graduate to the tones. However, we all learn at our own pace; there’s no need to rush if you’re not ready.

Pinyin pronunciation is the key to unlocking the rest of the components in Mandarin, so it’s best to find your stride at the base level before piling on more challenges. And there’s a variety of methods to help with your pronunciation and get you to the next stage of learning Chinese.

How to Practice Your Chinese Pinyin Pronunciation

Watch and Learn: Use People and Video

Speaking a language is essentially a behavior, and how do we learn behavior?

A lot of the time when we can’t seem to get pinyin right, it’s because we’re not shaping our mouths or using our tongues the same way that native speakers do.

Seeing and picturing the mouth movements of a fluent speaker is a visual lesson that everyone can use to get rid of English-speaking habits that challenge their progress.

Obviously, it’s a bit creepy if you watch Mandarin Chinese speakers up close, especially if you’re out in public and just randomly watching people at the table next to yours. So instead of eavesdropping and blatantly staring at strangers’ oral behavior, try the following learning techniques:

FluentU gives you access to handpicked videos—like music videos (which we’ll get to below), movie trailers and more—that come with optional pinyin subtitles along with Traditional and Simplified Chinese captions.

In general, watching videos is helpful for nailing pronunciation, but there are also videos that will actually show you diagrams that exhibit what parts of your mouth are moving to create each pinyin sound, which are very helpful for visual learners.

Your smartphone can do just about anything for you these days, even help you practice Chinese pinyin pronunciation when you can’t keep up with the rest of the class. App stores are bursting with options for learning Mandarin, and you may find a more general app among them that’s great for practicing pinyin.

For an app specifically tailored for pronunciation and tones, Standard Mandarin has got you covered. It’s suited for every level of speaker, from beginners with zero Chinese knowledge to those who would like to brush up on their pinyin. If you don’t have access to the iOS version, you can use the desktop version instead.

Once you have an app that works for you, make sure to practice regularly with it. Too often, we’ll obsess over new apps, spending hours upon hours exploring all the features, only to forget about them the following week. What you should do instead is put aside maybe 15 or 20 minutes per day for using your pinyin app. Consistency is vital in grasping pinyin.

Other Fun Ways to Practice

Learning doesn’t have to be all about conventional study methods, or even the same modern methods because, let’s face it, those can get boring.

With all these tips, tricks and techniques in your hands, pronouncing Chinese pinyin will become second nature to you!

Learn Chinese on Twitter: 10 Fun Feeds to Follow
Do Yourself a Favor and Learn These 9 Funny Chinese Phrases