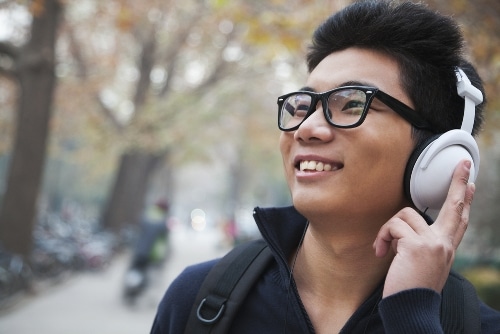 Tired of memorizing characters or slogging through books in Chinese? I hear you.

Don’t stop thinking about Chinese though—just because you need a little mental break doesn’t mean that you need to stop practicing Mandarin.

Maybe you just need to close your eyes and relax with some music.

Oh, and I’m not talking about greatest hits performed on the erhu. You need music with words if you’re going to get any language learning benefit. But it’s great listening practice that also happens to be fun—and here are 10 famous singers to get you started listening to Chinese music.

Why You Should Know Famous Chinese Singers and Their Music

Their Songs Are Great for Learning Chinese

Listening to music can be both passive (just put the music on and doze off or do dishes) and active (study lyrics, listen to songs repeatedly and sing along), which makes it a great activity to use for both types of learning—and a way to practice some Chinese even if you don’t have enough energy for more active study.

You can learn vocabulary from song lyrics, and singing along to music is excellent pronunciation practice, although not necessarily a good way to practice tones. You’ll need to put in extra time on tones outside your music time.

Right about now, you’re probably thinking that you’re more into indie bands who have a loyal following of 800 people. That’s fine. But you still need to know who the famous people are, or when people make reference to them in conversation you won’t know what’s going on. It’s like not knowing who Lady Gaga or The Beatles are. Part of getting the cultural literacy is knowing not just who the person is, but being familiar with his or her most famous work.

Famous Singers Are a Gateway

If you want to ultimately be a connoisseur of obscure Chinese music, it’s best to start with getting to know not-so-obscure work. It’s also a lot easier to find song lyrics, YouTube videos and other materials online for well-known artists and their well-known work than it is for more obscure titles.

You can also listen to Mandopop radio, but that’s best for times when you’re just looking for background music. If you’re doing a more active listening exercise, it’s best to be intentional about what songs and singers you’re listening to.

And FluentU is perfect for this type of exercise.

So let’s dive into some Chinese singers!

Possibly the most famous Chinese singer out there, 邓丽君 started singing professionally as a teenager in the 1960s and her career stayed strong until she died at age 42 in 1995.

She’s known for romantic ballads and folk songs. Although most of her songs were covers, her interpretation of many songs is still the most recognized version.

Sometimes compared to 邓丽君, 江蕙 is also known for ballads and folk songs. She became famous in the 1980s and continues, at age 54, to be one of Taiwan’s most popular singers.

Although many of her songs are performed in the Taiwanese dialect, she tends to sing quite clearly and slowly, making her music a great introduction to the dialect.

周杰倫 broke into the Taiwanese music scene in 2000, and is part of the younger generation of pop stars. Like other Chinese pop singers, he has a stable base of popular romantic ballads, but unlike many pop stars, he also has many songs that address societal issues like urban sprawl, drug addiction and domestic violence.

He writes most of his own music but works with songwriters to craft the lyrics, generally speaking. His style is more rap or spoken word than melodic, which makes his work great for listening practice—but careful, it goes fast!

張惠妹’s first taste of the spotlight was in 1994, when she won a popular national singing contest in Taiwan. Somewhat unique among Taiwanese singers, 張惠妹 is from an aboriginal Taiwanese group—so she is not, like most Taiwanese and mainlanders, Han Chinese.

蔡依林 entered an MTV singing contest in 1999 as a way to beef up her college application—and then she won. Her first album, released that same year, became one of the top sellers in Taiwan, launching her career and leading her to be called a “teenage boy killer.” 蔡依林’s songs are definitely Mandopop—they have catchy rhythms and she performs Britney Spears-style dance routines.

She’s not the country’s absolute most famous singer—but if you don’t know who 彭丽媛 is, you’re living under a rock. 彭丽媛 is known for her ballads and folk songs—and for being married to the most powerful man in China, 习近平 (xí jìn píng). The couple has been married since 1987 and, for most of their marriage, 彭丽媛 was undoubtedly the more famous of the two. He labored away in relatively remote political posts, while she gained fame for her regular appearances on CCTV’s New Year’s gala and toured extensively both in China as well as throughout Europe and the Americas. Her songs have a distinct patriotic flavor and—no surprise—she’s generally very pro-government.

Start with: “父老乡亲” (fù lăo xiāng qīn) – “The People From Our Village”

While 彭丽媛 was singing for the soldiers during and after the Tiananmen Square protests, 崔健 (also called “The Father of Chinese Rock”) was very much on the protesters’ side. One of his first hits, 一无所有 (Nothing to my Name) became a sort of theme song for the students in the square. 崔健 has continued to be popular decades later, in spite of being banned from playing in major venues throughout the 1990s.

Beijing native 王菲 actually launched her career in the early 90s in Hong Kong, at a time when Mainlanders suffered from a host of negative stereotypes in Hong Kong. She was encouraged to hide her origins by adopting another name and singing in Cantonese—and she actually holds the Guinness World Record for being the best-selling female Cantopop singer. But 王菲 moved back to singing in Mandarin more or less as soon as she had sufficient artistic clout to do so, around the mid-1990s. Her songs are considered to be a mix of traditional, crowd-pleasing pop songs and more alternative style music.

Born and raised in Hong Kong, 张学友 sings in Cantonese, Mandarin and English, and is famous throughout Asia for songs in all of those languages. His album “吻别” (“Goodbye Kiss”) became one of the highest-selling albums ever in Asia when it came out in 1993. The album helped solidify 张学友’s place in the Mandopop market (as opposed to the Cantopop market) and he became hugely popular in Taiwan, where “吻别” is still the the second-highest-selling album ever.

Androgynous sounding and looking 李宇春 does not fit the usual mold for female Chinese pop stars—but since winning a Super Girl competition (similar to “American Idol”) in 2005, 李宇春 has undoubtedly become one of China’s most popular singers. 李宇春 also has a certain amount of international fame, and represents a large number of Western brands in China.

Now that you’ve got plenty of music to listen to, it’s time to stop reading and start rocking out!

Listen to at least one or two songs from each of the singers I’ve mentioned above—but if you’re not into a certain sound or style, don’t feel like you need to linger too long.

Hopefully a couple of the singers will have some work that you actually enjoy listening to, and then you can use that as a springboard for finding more Chinese music—and great listening practice materials—that you enjoy.