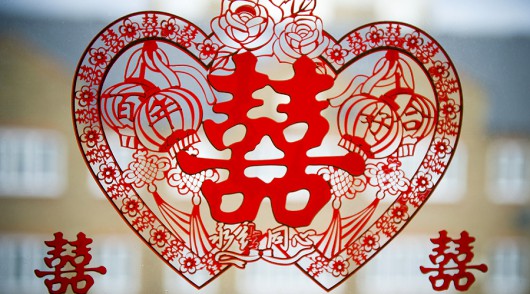 Do you hear that? The ringing of wedding bells in China. The sound of $80 billion being dropped on this booming industry. Cha-ching!

So how much does the average Chinese wedding cost in China? What are some of the wedding traditions and customs that are a ‘must know’?

With an average of 10 million couples tying the knot every year in China, and I’d say it’s a topic to be a bit familiar with. Let’s jump into it!

The Predicament of the Modern Chinese Wedding: Setting the Stage

It’s a big frenzy. There’s so much going on when you break it down that regardless if you’re the guy, girl, family member or wedding company, there’s pressure when talking about marriage.

Men face a few hurdles to overcome. To be an elegible bachelor and meet the standards of most Chinese women is difficult to say the least.

They should be earning at least 4000 RMB a month, have a house, a car and .. oh wait, did I mention that the average salary of a Chinese college graduate is 3000 RMB a month, an average apartment in Shanghai is 28,147 RMB (US$4,542) per square meter, and an average car is more expensive than it is in the US because of the import and customs tax? So, is it logically possible to have all these things before your 30’s? You do the math.

Women face being called “剩女,” (shèng nǚ). Literally meaning left over women, it’s a label no woman wants. Typically, this is a woman who is in her 30’s and doesn’t have a boyfriend yet.

A lot of native city girls who are educated, have a job and looking for the perfect prince charming to sweep them off their feet are in competition! Recently, many women from the country-side will go to bigger cities in hopes of finding a husband and “better life.” Usually since women from the country side will have lower standards than those native to bigger cities, it might be easier for them to find their match, leaving a lot of native city women “剩女.”

Family members can put on the heat! With the one child policy, a lot of parents, grandparents, close relatives and even that cousin who’s your aunt’s sister twice removed will be asking “so, do you have a girlfriend/boyfriend yet? Surely you’ve heard of Match.com or eHarmony, websites helping those who are single look for their significant other.

China has taken this to the next level. There are “Marriage Markets,” where the parents will write a synopsis of their child and try to find a match with other parents.

In cities like Shanghai there’s a weekend “Marriage Market” where there are rows and rows of ads parents put up about their children including their age, height, salary etc.

These dates usually don’t turn out to be too successful since unbeknownst to the child, the parents are trying to set them up.

A cultural point worth noting is that in China the children are expected to take care of their parents once they get older. All the pressure is put on the one child that will carry forth their family’s legacy – a lot of responsibility for one in their twenties, no?

Thousands of companies are striving for their slice at the $80 billion. Companies like Beautiful Wedding offers classes for people become a certified wedding specialist for 18,000 RMB.

So we all know that China is booming, and the rate at which it’s growth has affected the wedding industry is apparent by how western the ceremonies have become.

The engagement process is a bit different than that of the west. In China, the families must approve and upon approval, the groom’s family will start giving ‘grand gifts’ to the family of the bride. A typical gift may be money (dowry) that comes in nines (999 or 9999) since a homonym for nine (九 －jiǔ) in Chinese means forever or a long time (久－ jiǔ).

In Shanghai, the typical ‘bride price’ can start at 100,000RMB (the most expensive city). Here’s a basic chart with the average price of the ‘grand gift’ to the bride’s family based on a survey of a few thousand Chinese.

The families of the soon to be couple will usually seek out a fortune teller to set a date for the wedding. The Chinese are very superstitious and want to marry on a lucky day, like 08.08.08 (since 8 is a lucky number in Chinese) or 01.04.13 (this date means ‘love you forever’).

Instead of having professional pictures taken during the wedding, in China, the couple will have their photo shoot before the wedding.

Back in the 70’s and 80’s the weddings were so simple, it might be hard to believe. After being legally married, the most you’d do is have a small family gathering, buy some furniture, rent a car and it may cost around 3000 – 5000 RMB total.

Today after getting legally married by officials in the offices of the Civil Affairs Bureau, there’s the party or banquet part (as westerners would call it, the reception). This is because respectively, these fruits are a homonym that means “早生贵子” (zǎo shēng guì zǐ) in Chinese, blessing the couple to have a healthy child quickly.

Besides the typical speeches and toasts made to congratulate the newlyweds, the couple will also make their way to each table making toasts during the banquet. The bride will wear a western style white wedding dress and change into a traditional cheongsam (旗袍 － qí páo).

How Many Zeros For Happily Ever After?

After all this you must be wondering how much the average price for a wedding in China must be.

If we’re just talking about the banquet itself, the average for one round table (seats 10 people) at a five star hotel costs about 2,000 RMB each, but can get as high as about 10,000 for even fancier ones. Multiply that by how many guests you’d like to invite, typically in China there’s about 150-300 on the list. However, this is just the cost of the banquet.

Now, let’s factor in the dress, photography, ring, flowers, and everything else:

Now that’s a whopping price tag that the groom’s family is expected to cover (at least most of it)! 1. Most Romantic (and expensive?) Proposal:
In Shenzhen, Guangdong a man paid to broadcast these 10 characters for 5 minutes on the tallest skyscraper for his proposal “郑珊删，我爱你，嫁给我吧”  Translation: “Zheng Shanshan, I love you, marry me?”

2. Rudest Way To Accept the Hongbao

When you give a tip when getting a haircut or some service and present it in an envelope, it’d be a bit awkward for the person you tipped to open it right then and there. The same applies for guests at a wedding when giving a 红包.

One family in had an actual banknote counting machine (like the ones you find at banks that counts cash really quickly and finds fake bills).

3. 拜天地 (bài tiān dì): formal bows by the bride and groom that are made to heaven and earth, their ancestors’ tablets and each other

How to Speak Chinese Fluently: A Foolproof Method
Get Early Access to the FluentU App!

4 Responses to An Introduction to Modern Chinese Wedding Customs