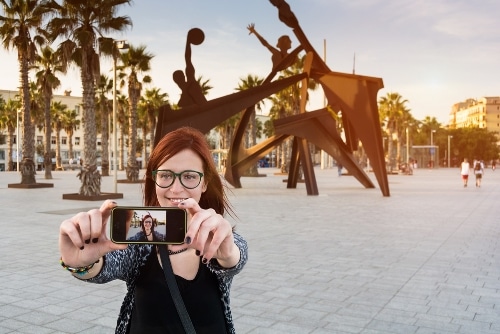 You Are Here: Achieving a Total Immersion Mindset in a Spanish-speaking Country

Buy a ticket, pack your bags and get your butt to a Spanish-speaking country.

Because immersion should be just that: immersion.

That means jumping in the water, ducking your head under and letting it close over you. Yeah, it’ll be scary for a minute. You might founder and gasp for breath. But you can’t learn to swim without getting wet.

Still, you have to understand that it’s not enough to just go to a Spanish-speaking country.

It’s not even necessarily enough to intentionally put yourself into various situations where you’re forced to speak Spanish.

You have to make yourself a whole new Spanish-speaking identity in your adopted country.

Creating this identity, nurturing it and using immersion situations to maximize its formation is crucial to achieving fluency in the least amount of time possible.

But in order to do any of this, you first need to be clear on what your immersion goals are.

So before going any further, let’s get that locked down.

What are your goals for Spanish immersion abroad?

You might already realize that for quick, effective results, you have to go out looking for immersion. You have to seek out opportunities to use and perfect your Spanish. After all, sitting in the shallow end of the pool isn’t the best way to learn how to swim.

But in order to have the level of commitment you need to achieve this kind of dedication, you have to be totally clear on what your goals are.

So, let’s talk for a minute about your goals.

It all comes down to one thing: fluency. You wouldn’t be trying to immerse yourself in the Spanish language and Spanish-language culture in the first place if you didn’t have a strong desire to become fluent. And fluency means rewriting brain patterns. Yup. You have to change not only what you think about, but how you think.

You have to be completely willing to get to the point where when someone comes up to you and says, “You have beautiful eyes,” you immediately respond, “Gracias,” before realizing he was actually speaking to you in English.

Aiming for fluency means being willing to sacrifice a little bit of your English in such a way that the first word that comes to mind is a Spanish word, not an English one.

In the process of becoming fluent abroad, you may find that you feel like a person divided, that your English self and your Spanish self have two completely different identities.

This is totally normal and there’s no reason to resist it. In fact, you need to embrace it.

Very often language learners find themselves developing split identities. Each identity is centered around a language.

Your second language identity, your Spanish identity, is born from necessity when you live abroad and immerse yourself.

This identity may be more reserved than your English identity—maybe you are shy about using your Spanish. Or maybe this identity is exactly the opposite, more outgoing because you jump at every chance you get to talk.

Your Spanish identity will develop a different sense of humor. You won’t be able to understand all jokes in Spanish right away, especially the more intricate cultural ones and puns. Maybe you’ll find that whereas you’re hilarious in English, you can’t quite control your Spanish enough to make people laugh yet. Or maybe you’ll find you’re absolutely hilarious in Spanish, while not so much in English.

There are a hundred different ways your Spanish identity may evolve. But it’s nothing to be afraid of. It’s a natural process in Spanish language immersion.

Eventually there will come a day when your two identities begin to merge back into one again. On that day, give yourself a hearty pat on the back, because you’ll have scaled the fluency mountain and it’s all downhill from there. (But in a good way.)

How to approach immersion abroad: Making theory work with practice

Keeping up with theory

Yes, traveling to a Spanish-speaking country to immerse yourself in the language is great. It’s amazing. There is no better way to learn a language. You’ll learn things from people you meet that you never would have learned back home.

But it isn’t enough to expect that you will learn everything you need to know simply by being in a Spanish-speaking country. You can’t give up on studying the language as well.

Okay, you could give up studying. But if you don’t, fluency will come a whole lot faster.

Complement what you learn in the streets with your own studies. Grammar is especially important, but vocabulary is, too. By continuing to study vocab, you’ll ensure that you’re learning more than just the common words you’ve picked up in school or that people you know use.

FluentU is a great option for keeping your Spanish skills sharp and filling out your Spanish vocabulary, whether at home or abroad. FluentU takes real-world videos—like music videos, movie trailers, news and inspiring talks—and turns them into personalized language learning lessons, allowing you to review learning points that pop up in real native speech.

Actively seeking out opportunities to practice what you’ve learned

While abroad, you have to make an effort to use what you have learned in your studies in everyday situations.

If you don’t see the right situations, create them.

Go out of your way to find an excuse to use the verb arrebatar (to snatch).

Invent a reason to use the noun la neblina (the mist).

Using what you have learned will reinforce your understanding of it, cementing it deeper in your brain so it’s less likely to shake loose.

If you keep learning new things and practicing them, you’ll never plateau. (Because your goal is fluency, you aren’t satisfied with plateauing.)

Now that you’re clear on what your immersion goals are and how you should approach them, we can look into some tried-and-true methods for getting up-close and personal with the Spanish language.

Surround yourself with as many native speakers as possible

This may seem obvious, but if you want to become fluent in as little time as possible, it’s important to make sure you’re really taking advantage of every possible opportunity.

Make Spanish-speaking friends. Make sure your best friends are native speakers. This may mean stepping out of your comfort zone a little, but it’s worth it. If you’re traveling with friends from home, don’t lean on them as crutches.

I will repeat that: You might have to cut yourself off from your friends from home.

At least a little. And if you’re really serious about your fluency, you should not be living with English speakers.

Seek out lodging with Spanish speakers. Wherever you live is probably where you spend the majority of your time. Where you sleep every night (well, most nights) and wake up in the morning. Why would you miss this opportunity to completely immerse yourself?

Consider finding yourself lodging with a local family at a homestay. This is a great option, as you may even be unofficially adopted and have a Spanish-speaking family for the rest of your life.

Another idea is to look for apartments with locals. Sublets are common and often you can even get by without having to sign a contract. Pisos.com and YaEncontre.com are good resources for those traveling to Spain. You can also check Facebook as there is almost always someone looking for a roommate.

Whatever you do, try not to stay with friends or in school housing. This will tempt you to use English when you could be practicing your Spanish. Stay with a local, and pretty soon, you’ll fall asleep thinking in Spanish and wake up thinking in Spanish.

Get a Spanish-speaking girlfriend or boyfriend. I mean, does any more really need to be said? Dating a native speaker (or two) may be the single best way to learn a language. Ever.

Language exchanges are created with the express purpose of practicing languages. Why would you not take advantage of them? Besides, you’ll meet some great people. Try Meetup.com to find intercambios (language exchanges). And cruise the local Facebook groups. Finally, keep your eyes peeled for posters on the streets and in storefronts. Soon, you’ll have a language exchange for every day of the week.

Go to shows, exhibits and performances in your area. Find your city’s guía del ocio (entertainment guide). Make it your new best friend. You’ll undoubtedly find photo exhibits, get-togethers, parties, gallery walks—something will appeal to you. Go! Talk to the other guests about the art or whatever it happens to be.

If you’re not already, take a class in Spanish. Many cities and schools will offer free or cheap courses on a variety of subjects. Others may let you sit in on classes. Find one you’re interested in and attend it. Learning Spanish, learning the subject and making friends: It’s a three-in-one.

Museums are big depositories of knowledge that are screaming, “Use me!” Listen to them.

When you visit a museum, read everything in sight. Not only will you be learning Spanish, but you’ll be getting an education in history, culture and art as well. Invest in an audio guide in Spanish to practice your listening comprehension. See if the museum has tours in Spanish and join up with one. Many museums also have downloadable apps that have info and recommended tours—just make sure you change the language to Spanish.

Tip: Check to see if your local museum has free hours.

Libraries. Oh, man. If museums are depositories of knowledge, what does that make libraries? Not only can you obviously find books in Spanish, but you can also look for meet ups, events, classes, work…oh, and meet people (you thought I wasn’t going to say it).

Cultural centers. Most cities have cultural centers which will feature events, exhibitions and classes. This is a prime immersion opportunity.

Joining some kind of team is a less obvious way to make friends and practice your Spanish, but it’s extremely effective.

TimPik offers pickup games for all sorts of sports while Fubles is great for fútbol players. If you’re not so much into athletics, look for a trivia challenge, game night, open mic or any other sort of scheduled gathering and make Spanish-speaking people your teammates.

Seriously. Everyone. On the subway. At the bar. In the park. Go out of your way to ask about someone’s dog, or compliment them on their hairstyle.

Most people are naturally friendly and most will be curious about you and what you are doing riding your unicycle in the main plaza (you know, if that’s your thing).

People crave connections. Let being a language learner be your excuse to connect.

Soon you’ll find that your Spanish self is confident, outgoing and has a ton of friends.

Once upon a time, you set out to learn Spanish. And somewhere along the way, you’ll realize you’ve changed. That you’re not the person you were when you started. That you’re rounder, denser and there are a whole lot more aspects to yourself than you ever realized.

Your newly formed Spanish identity and your native English identity will have merged and become…you.

And that’s what immersion is really about.

Edward Mack was a part of the inaugural Master’s class in Creative Writing at the Complutense University of Madrid. His diverse ramblings on topics from perpetual bachelordom to murderous country music stars are often sardonic, sometimes poetic and always entertaining.

Spanish Vocabulary Around the House: 100+ Words and Phrases for Everyday Use
Count On Us: We’ve Got the Complete Guide to Counting in Spanish