Can’t understand your Spanish friends’ Facebook statuses, or having trouble compressing what you want to say into 140 Spanish characters on Twitter?

Learning to read and write in Spanish isn’t as easy as it used to be.

In this world of tweets and text messages, you’ll need to learn Spanish text slang to follow what’s going on.

For more colloquial Spanish, click over here (it contains a list of links to all our other Spanish slang posts):

Why You Need to Learn Spanish Text Message Slang

It’s not just a case of keeping up with the cool kids.

There are several practical reasons why learning Spanish text message slang is useful for anyone.

If you hear the “no credit” beep in your dreams (or nightmares), it’s probably time to cut down your text messages and make them shorter.

You can simply say less in your messages, or you can use fewer characters to say the same thing. I think you’ll agree that the second option is more appealing. Cutting down on characters will save you money on texts in the long run and your friends will be glad to no longer receive your four-message-long essays.

Squeezing what you want to say into one text message is also great practice for when you want to make your Spanish debut on Twitter.

Which you are, of course. Right?

Deciphering all those signs and symbols can be a fun way to use the Spanish you already know in a new way.

So, chic@s, let’s get into some Spanish text slang.

Like in English, omitting vowels (vocales) is one of the easiest way to shrtn wrds. Genial becomes gnl, for example.

Losing consonants works too. Ahora is often written as aora.

But of course, it’s not always just a simple case of getting rid of the vocales.

When a word begins with es, drop those first letters. So estoy becomes toy and esta becomes ta. Ta b means esta bien. Aren’t you glad you started reading this guide already?

It’s suddenly all becoming crystal clear…or perhaps just about as clear as mud. Stick with it to avoid being a total stick in the texting mud.

Another Spanish text slang characteristic is switching letters. For example, the letters q and c both change to k, so quiero becomes kiero, aqui becomes aki and clase becomes kls.

Note that the word que on its own can either change to k or q.

As por and para are similar (though sadly not exactly the same!) para becomes xa. Para qué? (another version of “why?” or “what for?”) becomes xa q?

The third and final way you can use the X in Spanish slang is to replace ch. For example, mucho becomes mxo and chau becomes xau.

In English we have FYI, LOL, ROFL and various other abbreviations. In Spanish there are plenty of phrases that work in a similar way. Te quiero mucho becomes tqm or tkm, for example. 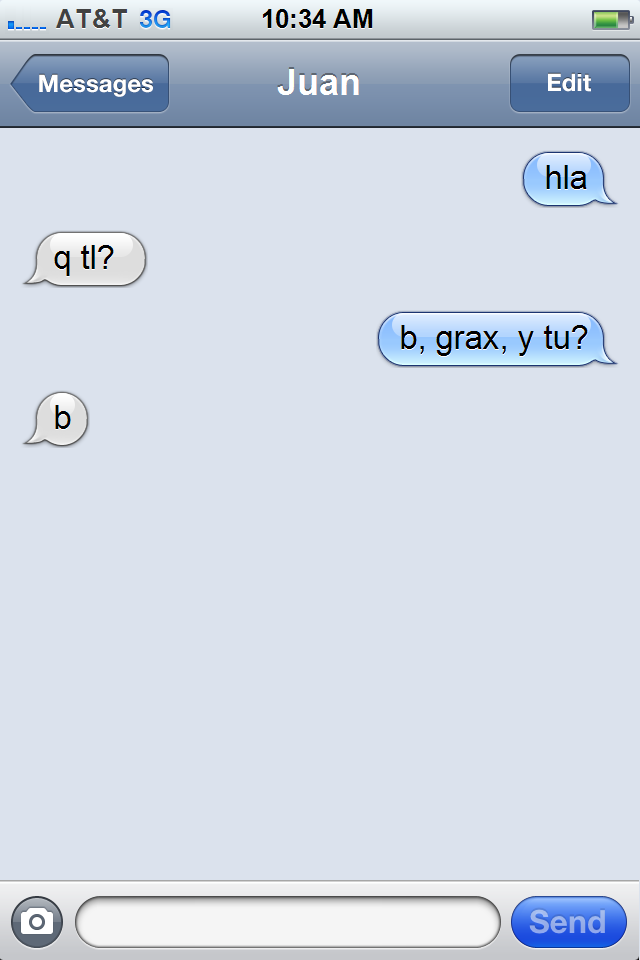 In “normal Spanish” this means:

Have lots of jajajaja in the middle while you chat about silly things and have fun. To “laugh” in Spanish, you can use jajaja, jejeje or jijiji. 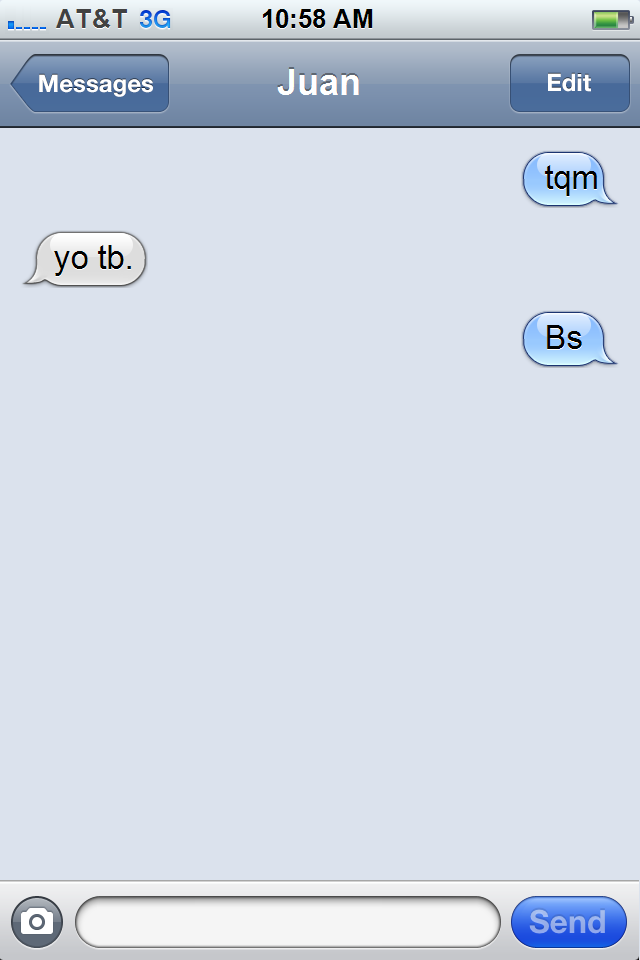 The “normal Spanish” translation for this one looks like:

You can also end a text with bst (which means besito, or “little kiss” in English) and a scattering of emoticons won’t hurt matters either.

Along with TQM and TKM, another popular slang phrase is TAM, which doesn’t refer to the Brazilian airline but stands for: te amo mucho.

The equivalent of FYI (for your information) is PTI (para tu información).

It’s important to note that some Spanish speakers, especially young people, may use the English phrases instead of the Spanish equivalent. For example, they might use LOL (laugh out loud) or OMG (oh my God) in their English forms, since most people already know what they mean in English.

Got all that? Still can’t understand the text message you’ve just received from your Spanish-speaking friend? Here are a few more words and phrases to fill in the gaps in your slang knowledge:

In English, we might end a text with “cul8r.”

We can also say something is gr8!

The same concept of using letters for the way they sound applies to Spanish words. What do you think salu2 means?

No, remember, that we’re speaking Spanish here so 2 is pronounced dos.

There you go. You can now send greetings to people in your text messages.

Other phrases using numbers are:

You could end your text message with: Tqm xa 100pre.

That would mean, te quiero mucho para siempre or “I love you forever.” Or simply end with Salu2, to play it a bit cooler.

Symbols can also be used in fun ways to make phrases.

How do you think you would say “me da igual” (I don’t mind)?

You could choose from:

(= is pronounced igual in Spanish).

Yes, you read that right.

This isn’t just to look cool, but rather it’s a way of representing that the friends or people could be boys or girls, (where they’d usually be either amigos or amigas) and making Spanish more gender neutral. Got that, + o –?

You’ll also notice that, to save space, the upside-down question and exclamation marks aren’t used in Spanish text slang.

So there you have it, you should be able to impress your Spanish-speaking friends and bombard them with tweets, Facebook messages, hashtags and WhatsApp messages. And of course now your text messages will be much shorter.

Next on your list should be spoken slang. That’s basically like audio text messages, right? Okay, maybe that’s a stretch. But if you want to sound natural in Spanish, it’s always a good idea to learn some common slang that’s actually used by Spanish speakers.

One way to learn useful Spanish slang is on FluentU, where you can hear it in use through authentic videos like movie clips, music videos and vlogs.

You can check the definition of any word from the video’s subtitles, and these definitions are contextual. That means you’ll see if a word is being used as a slang word (or if it’s just a regular word you haven’t heard before). Plus, you can save words as flashcards and make entire decks dedicated to slang study. 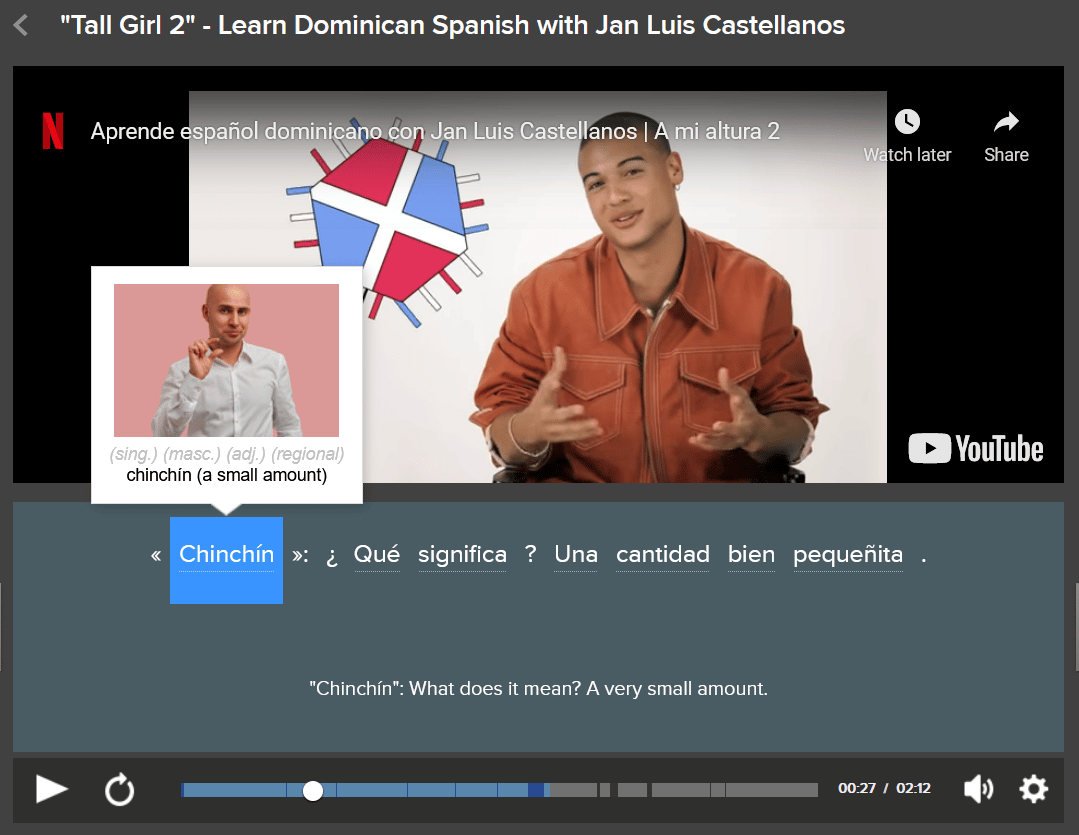