We really do not realize how bizarre the nicknames we use every day are until we actually take a second to think about them.

Every language has them, and Spanish is one of the most entertaining of them all.

Here are 40 Spanish nicknames that are cute, funny and even insulting to use with everyone in your circle of friends and loved ones.

Names That May Confuse English Speakers

Often used when placing an order at Taco Bell, this word, which translates to something along the lines of “little fatty” can sometimes be used as a non-offensive term of endearment between lovers.

You can hear it being used in this Spanish-language commercial for Cheerios on FluentU: 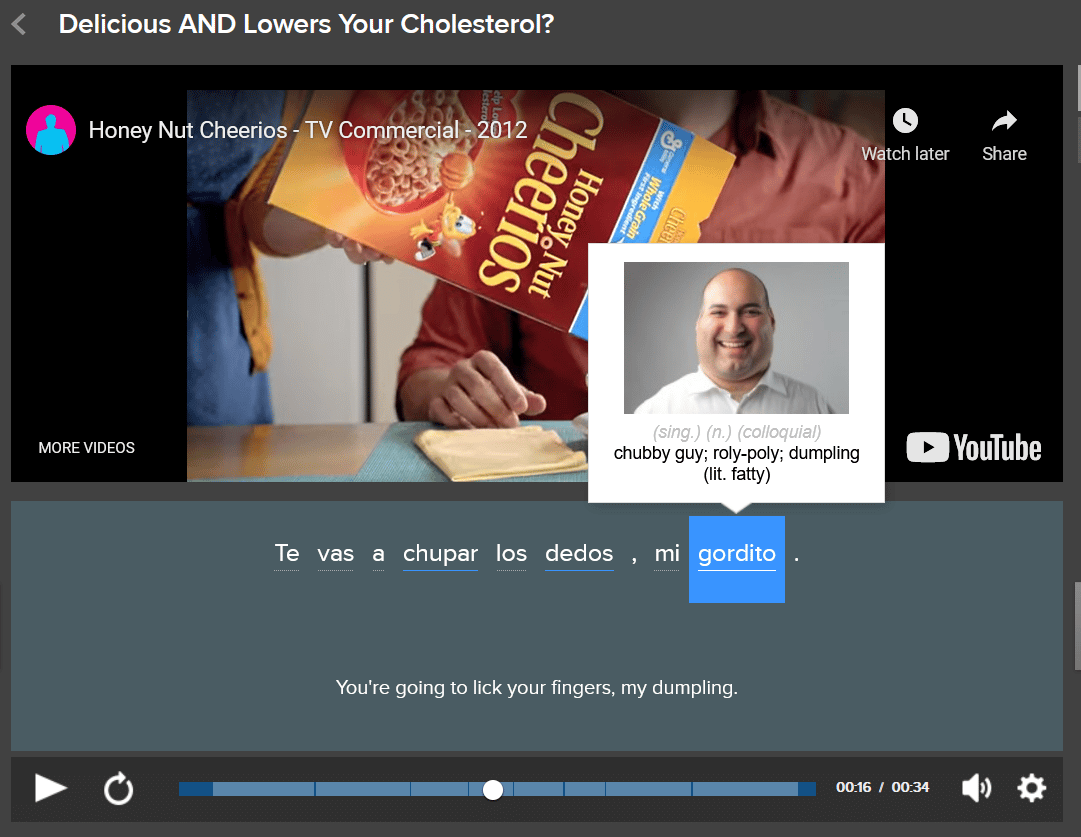 You can watch the commercial on this learning platform with interactive subtitles, as you can see above. These let you hover over any word for a definition or click on it for more information as well as text and video examples.

FluentU has many authentic videos like this one, ranging from movie clips to news segments, giving you lots of opportunities to hear the language used naturally by native Spanish speakers.

Try searching FluentU for any of the other nicknames in this list, and the program will show you flashcards of the words and any videos where they appear. You can even create a “nicknames” flashcard deck and save your favorites to it. Then, you can practice them with quizzes that’ll change up the questions based on your progress.

While this translates directly to “father” in English, it is often used when talking to non-related elders in select Spanish-speaking cultures.

While it translates literally to “small chicken,” it can be used in a variety of ways between Spanish cultures. It is most along the lines of meaning cute, adorable or attractive.

You’ve likely heard this one in shows, and it is mostly attributed to the Mexican culture. It means something like “homeboy.”

This is another often heard in the Mexican culture. It is one of several words that may be used in place of “dude,” “man” or “guy.”

This one varies depending on where it is used. It technically means someone who is a mestizo (a person who is of both European and Native American ancestries), but colloquially, it is used to refer to a person who has a certain style that includes baggy pants, flannel shirts and a bandanna tied around their head.

Pronounced like “wey,” it translates to “ox” but is used most similarly to the way we say “dude,” except sometimes it can be used derogatorily to call someone silly or used as an exclamatory word.

This name originated to call a Mexican with a flamboyant style and personality in the early 20th century, who looked and behaved similarly to what we would call mobsters or gangsters.

It may now be used to describe someone who has a similar style or for someone who behaves in a way that is considered socially inappropriate.

Literally means cousin, but may be used to call someone who has maintained a close friendship.

This can be used on an extremely skinny person, as it translates to “skeleton.” You may say something like, “¡Come algo, calaca!” (Eat something, sketeton!)

This one means “pug nose,” which is not usually something we’d say in English, but I think you get the point here.

Used to say “old man/woman,” this one can be used jestingly or offensively depending on the context. It can also be used to refer to your parents—but whether or not it is offensive depends on your tone of voice and how much of a sense of humor your parents have.

While it has the literal meaning of a male goat, it has a much more negative colloquial use. You may use this for someone who you would refer to as a “jack*ss” or a “player.”

This translates literally to “long tongue” and can be used in place of “Big mouth” or “Chatty Cathy.”

This is a word often used if you want to say that someone is not very intelligent or has done something remarkably silly. Estúpido/a can be used interchangeably, but it is somewhat less common than tonto/a.

This is basically the equivalent of a “klutz.” It can be used on the person who drops something, picks it up and then accidentally drops it again.

You could probably guess that this one means “idiot.” A phrase that may accompany this is “el burro sabe más que tú” (the donkey knows more than you). This is getting into even more offensive territory and farther from affectionate nicknames, so be careful.

This word translates to “fox,” and can be used to refer to a girl who gets around with the guys a lot.

It can be downright offensive or just sassy—depending on who is saying it, how they are saying it and their level of affection for the girl being referred to.

Names for Friends and Family

Conejo means rabbit and conejito means little bunny. This can be used in a few ways, but one of the most sensible is for someone who is fast-paced.

Just like the popular banana brand, chiquita translates to “little girl.” Chiquito is the same, but for a small boy.

This translates directly to “boss” in English but is often used more expansively in Spanish.

Meaning cutie, this one is used on children, adults, men and women equally. Something that is commonly said is “qué chula” which means “how cute.”

Note that, as it often happens with words in Spanish, this word can have different meanings in different countries, so watch out if you are, for example, in Costa Rica, where it can be used to speak about a person who tries to live from the others.

This one refers to a person who is very light-skinned or light-haired.

Spelling and pronunciation note: In Spanish, the two dots as seen above the ü are called diéresis. They are seldom used in the language. In this case, they indicate that güero is pronounced like “wer-o.”

Literally means wolf, and usually refers to a person who is sly.

This refers to someone one who likes to gossip.

Someone with this nickname is cunning and manipulative, much like the English “trickster.”

Most commonly used to refer to someone handsome or attractive. It is a name that is often also used sarcastically to mean the opposite.

It means pretty, but lindo/a does not have the same embarrassing effect as “pretty boy” does in English.

This one is used to refer to someone who is very studious as it translates to “the brain.”

This one means and is used in the same way as “girl” in English. It is frequently and casually used. “Hola, chica. ¿Cómo estás?” (“Hey girl. How are you?”)

The Spanish are known for being romantic. A person may call their love interest mi alma, which means, “my soul.”

Chances are you’ve heard this one before. While papi is a derivative of papá, this one is often used in *ahem* very different contexts. This one translates to something like a “macdaddy” in English.

This one is used quite frequently and is most similar to how we say “dear” or “darling” in English.

This simply means “beautiful,” but it can be used as a name of sorts. Other words that mean basically the same thing are bonita and bella.

Derived from the verb amar (to love), amado means “loved” in English.

To call someone mi amado/a is much like calling them “my beloved.” A variation of this includes mi amor, which means basically the same thing.

These mean “prince” and “princess.”

Means “my little sky” or “my heaven.” Mi sol which means “my sun” may be used in a similar manner.

Sorry if these are making you feel lonely. Here is a fun fact: The word for “loneliness” in Spanish is soledad and is actually a common woman’s name in some Spanish-speaking countries.

This means “my king” and mi reina means “my queen.”

This cute one means “my little mermaid.”

In English, it seems like it would be impossible to not relate this to the Disney movie and sound at least a little awkward to call a lover this, but in Spanish it can be used romantically.

The words above are used in authentic speech—that means many are considered “slang” or “colloquialisms” and you will not find them in textbooks.

That is why I recommend using authentic resources to learn these nicknames—and pick up more! Here are some resources to get you started:

There you have it. Now you are all set to charm, compliment and insult those around you in Spanish.