Puerto Rican Spanish: What Makes It Unique, Plus 14 Colorful Phrases

There’s the Spanish you learn from textbooks—and then there’s Puerto Rican Spanish, which talks fast, shortens some words and skips over letters.

Add the unique slang and vocabulary that shows up often in conversations, and you’ve got a fascinating whole new world of Spanish to absorb.

This guide will introduce you to Puerto Rican Spanish, from its sounds and characteristics to phrases that’ll help you blend in with the locals.

A Brief Look at How Puerto Rican Spanish Evolved

This most-populated U.S. territory (acquired from Spain in 1898) is rich in culture and especially language. Español puertorriqueño (Puerto Rican Spanish) has evolved as a result of the island’s history.

After Spaniards colonized the island, Spanish words and phrases melded with those of the native Taíno people already living there.

Puerto Ricans refer to themselves as boricuas. Working as both a noun and adjective, boricua simply means “Puerto Rican” and is more widely used than puertorriqueño, which has the same meaning. The word is derived from the name the native Taínos called the island—Borinquén.

With so many Spanish-speaking countries around, each country is going to have its own unique phrases and mannerisms—and Puerto Rican Spanish is no different. For example, it can take some getting used to for a lot of Spanish learners because some consonants are softened or removed!

Here’s what you should know about Puerto Rican Spanish:

You can listen to the sounds of Puerto Rico by watching this video from Speak Spanish Faster, which quickly shows you how different the dialect is from European Spanish and other Latin American varieties:

Some of the characteristics listed above appear in other Caribbean countries, including the Dominican Republic and Cuba. Aside from the sounds of the language, you’ll also need to get to know some popular slang to start speaking Puerto Rican Spanish!

This phrase literally means “on fire,” but everyone—from toddlers to the elderly—uses the expression to say something is really pleasing or that someone is very attractive.

An abbreviated version of muchacho (boy or young man) that means “Oh, boy!” If something is startling, surprising or just somehow unexpected, you’ll hear “¡Chacho!”

It’s also an expression that bridges thoughts, sort of like a stalling tactic. Asking a pregunta (question) that isn’t easily answered? Expect “Chacho” as the reply is mulled over.

“The pineapple is sour”—one of my favorite phrases because it’s just so totally boricua. It’s a Puerto Rican way to say “times are tough.”

This expression is widely used by shopkeepers, waitresses and even hotel clerks to indicate business could be better.

In a cab, headed from your hotel to El Morro? Chatting with the driver, laying down Spanish like a boss as he negotiates the narrow streets? Well, if you inquire about the tourist trade or even life in general, you may hear a sigh, then a muttered, “La piña está agria…”

And if you think that’s his way of saying you could be generous with the tip, you’re right!

These are slangy contractions for mi hijo or mi hija (my son or my daughter).

However, it’s actually a way of indicating relationship status among acquaintances.

Sound a tad confusing? It’s really not that complicated. Puerto Ricans are friendly and hospitable so it’s not unheard of for a casual acquaintance to bestow this implied closeness.

It’s kind of like pulling you into la familia (the family). So if someone refers to you as mijo or mija, feel complimented.

However, note that sometimes shopkeepers will “adopt” buyers with this little compliment to sell merchandise. Hold up a pretty scarf and ask, “¿Cuánto cuesta este?” (How much does this cost?) The reply could very well be, “Mija, para ti, es muy barato.” (Mija, for you, it’s very cheap.)

This is a phrase you don’t want to hear too often! When there’s an altercation brewing, locals say “¡No me molestes!” which means “Don’t make me angry!”

Pay attention to this one. It could be your warning to clear out of the area! Time to check out a different club, perhaps?

This word literally means “look” but is used to say “hey” if you want to get someone’s attention.

It’s often paired with Mami—which in this case doesn’t mean mother. Mami is used as an all-purpose way of getting a woman’s attention.

Another of my favorite Puerto Rican expressions, this is definitely a slang term that has no literal anchor.

Loose translations would be “Yay!” “ Great job!” or “Congrats!”

The two syllables can be drawn out so the tiny word seems bigger. It’s just a fun, all-around happy phrase.

Feel free to use it a lot. Everyone else does!

This just means “cool.” So if you like something, “Está nítido” (It’s cool) works fine.

This is a slang expression for cash. If you’re going to grab some tostones (fried plantains) and cerveza (beer), put some chavos in your pocket.

This word actually comes from the colonial old Spanish—ochavo—a contraction that means “one eighth.” It’s a reference to the “pieces of eight” carried by the Spanish settlers.

This may be the funniest translation on the street, although it’s a bit of a head-scratcher.

It’s a huge leap from una verdura (a vegetable) to bad behavior, but that’s the gist of it.

Chayote is a squash, so this is a way to say someone is acting/appearing like a chayote—but it means they’re being a jerk. I suppose there are worse things to be than a garden squash but in Puerto Rico, this is a mild insult.

Someone showing off just for the heck of it might earn this remark. It’s not a nice thing to say, but definitely not that awful—just a disparaging comment that has a million applications.

Did a loudmouth cut the line at a popular dance club? Expect to hear a chorus of “¡Se lució el chayote!“

This expression is widespread in Spanish-speaking countries globally, and it’s used quite freely in Puerto Rico, too.

Basically, it means, “Damn it!”

If you stumble on one of the beautiful cobblestone streets, ¡Coño! is the expression to use.

When the waitress reports the kitchen is out of mofongo, ¡Coño! applies here, too.

You’ll hear it everywhere, so it’s best to know what it means! Who knows? Maybe you’ll use it a few times, too.

Just be careful when using this word outside Puerto Rico, as it has a much more vulgar meaning in other Spanish-speaking countries!

“I go in on a horse and return on foot.” Colorful, don’t you think?

This expression can be heard frequently in gaming areas of the many casinos in San Juan, meaning that someone lost all their money. It can also apply to almost any venture where someone doesn’t profit.

So if you’re going gambling, make sure you don’t lose all your chavos (money) and return without your caballo (horse)!

Guagua is a slang term for the many buses that run through San Juan, Old San Juan and the surrounding communities. They’re convenient because there are a lot of blocks to cover and the temperatures can be high, but don’t count on the guaguas to run on schedule. They arrive when they arrive, without apology or explanation.

To go to the country—to see the island beyond San Juan.

This is a very useful addition to your Spanish vocabulary if you plan to go exploring the quaint towns and beautiful playas (beaches) outside the city limits.

How to Practice Puerto Rican Spanish

Puerto Rican Spanish can be romantic, soft and lilting, with nuances that deepen meanings beyond the ordinary. It’s a musical experience all its own, the result of the outside influences that mixed so sweetly with the indigenous language.

In short, this enchanted island doesn’t speak Spanish the way the rest of the globe does. Visiting gives travelers a chance to enjoy a distinctive language experience.

One way to practice listening to Puerto Rican Spanish is through interviews, vlogs and other online videos. For example, here’s an interview with Ozuna, a famous Puerto Rican singer:

Another famous Puerto Rican singer would be Pedro Capo. Notice how he says graciah instead of gracias:

You can also search for some authentic Puerto Rican videos with interactive subtitles and other learner-friendly tools on the FluentU program: 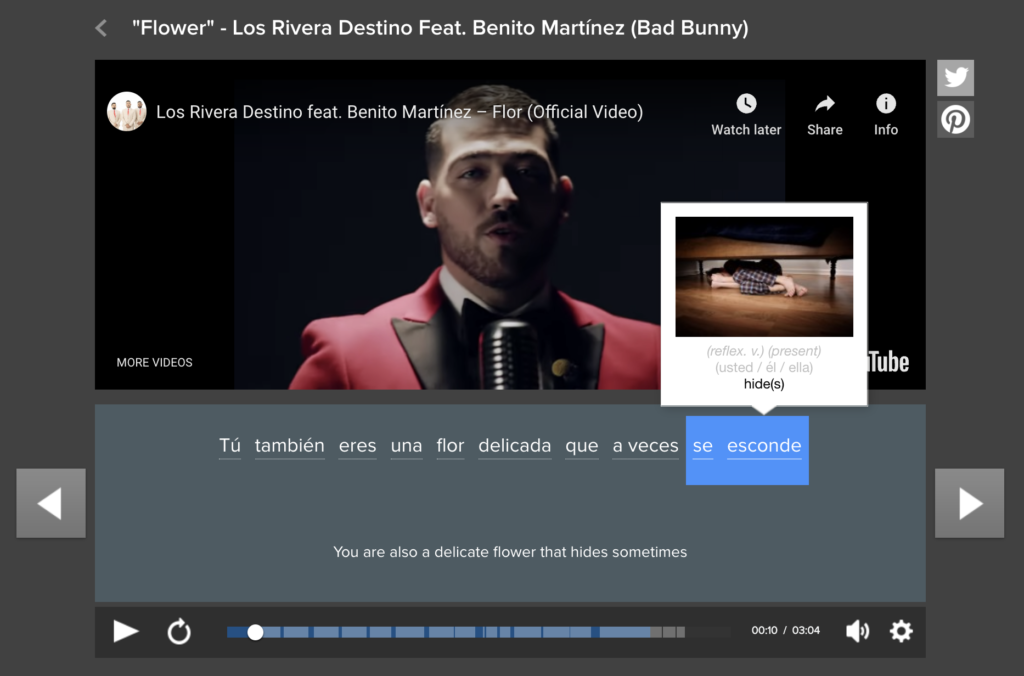 Puerto Rican music videos in particular might be helpful. You can also take a quiz after each clip to see how much of the language you understood.

Familiarize yourself with the sounds of Puerto Rico while learning the handy phrases above, and you’ll be able to connect with locals as you enjoy the warm winds and sandy beaches of the island!