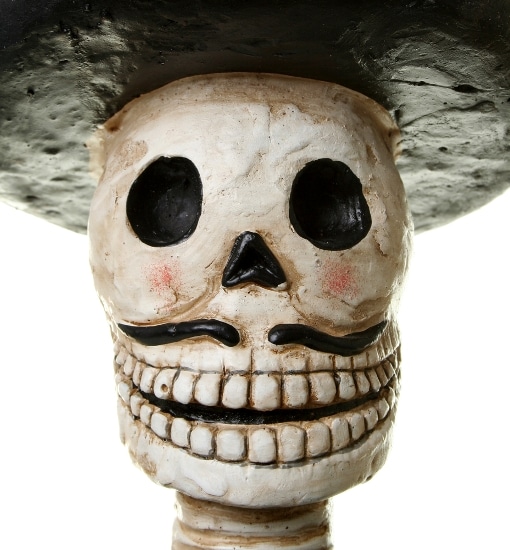 The Ghoulish Glossary: Spanish Vocabulary for Surviving the Day of the Dead

The dead will soon walk among us.

But it won’t happen on Halloween—this paranormal spook-fest occurs during another autumn holiday, El Día de los Muertos, or the Day of the Dead.

You may know it as one of Latin America‘s (particularly Mexico‘s) most important holidays, but the Day of the Dead is actually celebrated around the world.

But what exactly is this holiday, and what’s its relation to Halloween? Does it involve trick or treating and putting on scary masks? Or is it just going to visit some old graves?

What’s the Day of the Dead?

The Day of the Dead is a holiday that starts on midnight of October 31 and goes on until November 2. While many people think of this holiday as belonging to Mexico, it’s also celebrated in other Latin American countries such as Brazil, Bolivia and Ecuador, as well as in the Philippines and Spain.

The Day of the Dead is a way to honor the dead and also celebrate life. People make altars and offerings towards the dead and remember them by telling stories about them. They also clean their loved ones’ graves and lay flowers on the graves, which are said to attract the spirits.

Some people believe that on this day (or days), the dead come back to life again. Some even say that if the dead don’t see that they’re being honored on this day, they’ll become angry and may haunt the living.

This ceremony is thought to date back to pre-Columbian cultures, where people honored their ancestors. However, it was moved from August to October/November to converge with the Christian festival of All Saints’ Eve or Halloween in the late 20th century.

How to Enjoy the Day of the Dead

The best way to enjoy the Day of the Dead is to avoid getting too tied down in the more morbid aspects of the day. Sure, there’s some haunting stuff happening. There’s some sadness, heartbreak and longing for loved ones to return.

Although this day is a time to remember your loved ones, it’s also a time to enjoy the celebrations and celebrate the fact that you are alive. Don’t worry to much about all the supposed dead peoples’ spirits floating around. You’re breathing, you’ve got a pulse and—most importantly—you can party as only the living can.

Should you have a loved one you want to remember, and you quite like the idea of their spirit returning, the Day of the Dead is the time to remember their life and the positive things they did, rather than to be sad about the fact that they’re no longer with you.

Like all the best holidays, there’s some good Day of the Dead food for those in the land of the living, so make sure you try out all the local delicacies.

You should also try to join in local customs as much as possible, without being disrespectful, and take lots of pictures (but only where appropriate). Especially in Latin American countries, the Day of the Dead is a very colorful celebration, which is paradoxically, full of life.

But the absolute best way to squeeze the life out of the Day of the Dead? Swot up on your Day of the Dead vocabulary, and then use it as much as possible.

The Ghoulish Glossary: Spanish Vocabulary for Surviving Day of the Dead

The name for the day varies across countries. In Bolivia, the day is called the Día de las Ñatitas (Day of the Skulls).

In Brazil, it’s Finados (the Day of the Dead, in Portuguese).

The day is also sometimes referred to across the world as the Día de Todos los Santos (Day of the Saints) or simply Todos Santos (All Saints). The night of November 1 can also be called La Noche de Duelo (the Night of Pain/Sorrow).

Other essential words related to death (la muerte) that you’ll need when you’re discussing or preparing for the Day of the Dead are la tumba (the tomb) and el ataúd (the coffin).

El cadáver (the corpse) is a key player in the day’s events, and the cadáveres lie in el cementerio (the cemetery). You also might want to talk about el altar (the altar), la cruz (the cross, which often goes on the altar) and, of course, los espíritus (spirits), los ángeles (angels) and los angelitos (little angels).

Most families will prepare an altar for their deceased loved ones, which may include photos of the loved one as well as the food and drink they used to like. There may also be music, and family members exchange stories and anecdotes about the loved one. The altar may be at the cemetery itself, or in the family home. If you don’t live in a country that celebrates this holiday, making your own altar is probably the best way to replicate the spirit of the Day of the Dead.

To make your own altar, you’ll need several ingredients.

El alfeñique is a special type of candy used to make skulls or calaveras (not to be confused with cadáveres, which are corpses), frutos (fruits) and other little figures or figurines. These goods are laid out on the altar and are called ofrendas, or offerings. It is believed that the deceased consume the essence of these offerings, and then once they go, the living get to eat and enjoy the food and drink. This seems to work out pretty well for everyone involved.

Other food items are the pan de muerto (which translates literally to bread of dead) and is a special bread made on this particular day. There’s also mole, which is a thick sauce of chocolate, fruits and spices (read: not guacamole, which is made from avocados). There’s also atole, a drink made of corn meal and water, and flavored with fruit (in case you didn’t get it by now, the dead like fruit).

Another food stuff the dead apparently like is los golletes, which are pink sugared donuts.

El cempasúchil (sometimes called cempasuchil) is the yellow or orange marigold that’s traditionally used in the altars or laid on the graves. These flowers are everywhere in the lead up to the Day of the Dead and are said to be the symbol of death, or the flower of death (la flor de muertos). They make quite a cheery symbol of the end of life, so if death does like like a cempasúchil, it can’t be that bad.

As well as the sugared skulls, there are also the catrinas, which are skeletons dressed like rich women. These are also said to represent death. So apparently death is rich, and possibly yellow. A little like Mr. Burns in “The Simpsons.”

Las calacas are another type of skeletal figure that represent death. Death comes in many forms, apparently.

A lot of the decoration for the altar is made from papel picado, a sort of crepe or tissue paper that’s cut out into intricate and quite beautiful designs (which also tend to stick to the skull theme). There’s also el copal (the incense), which is very important in any ceremony, las velas (the candles) and el candelero (the candlestick), used to hold them. If a child has died, sometimes juguetes (toys) are also laid out on the altar.

The Day of the Dead Ceremony

It can also include la danza de los viejitos (the dance of the old people), which is a tongue in cheek dance where the dancers wear masks that look like old people. This dance is sometimes accompanied by el tambor (the drum) or some guitar music.

There’s also la iluminación (the illumination), which is a ceremony in the cementerio where thousands of candles are lit. These are supposed to guide the dead souls to their altars. Some families also scatter flower petals to lead a path from the cemetery to the altar, just in case the deceased get lost and end up at the wrong one (this would be rather unfortunate so the candles are probably wise, although there are so many of them they could easily follow the wrong flame).

Las calaveras are the songs and poems written about the festival, a bit confusingly, because, as you’ll surely remember, la calavera means skull. The songs and poems are mostly all about skulls anyway, so perhaps it does make sense. At the end of the celebration, las caretas are masks worn to supposedly scare off the spirits. Another word for mask used more commonly in everyday life is máscara.

So there you have it, put all of those elements together and you get a very lively Day of the Dead. And it doesn’t have anything to do with pumpkins, toilet paper or apple bobbing. There’s no saying you can’t merge the two festivals together though, and have a super duper Day of the Dead/Halloween party.

Want to know more about this incredible festival? Learn all about the goings-on in Mexico with this great FluentU video. You can also learn how the holiday is celebrated in Ecuador here, or discover how the holiday is a more somber affair in Spain here.

To learn with even more authentic videos, check out FluentU. FluentU takes real-world videos, like music videos, commercials, news and inspiring talks, and turns them into Spanish learning experiences.