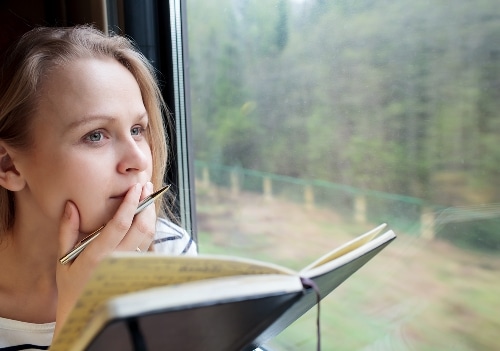 We all know that contemplating life’s big questions can be mind-boggling.

Getting philosophical in a second language takes learning to an entirely different level.

Well, prepare for some serious learning—we’re about to get philosophical with Spanish.

Thinking and talking about philosophy is nearly impossible in the early stages of learning a language. At this stage you can barely ask for directions and, let’s face it, even if you manage to get the question right, you’re lucky if you understood the response well enough to make it to your destination.

For advanced Spanish learners, it’s a different story. At this point, you can carry on decent conversations, watch movies and read books in Spanish. When you reach this level, you’re likely able to think in Spanish, which makes contemplating philosophy a manageable feat.

Some would argue that the advanced stage of learning a language is the most challenging. It’s often at this advanced level when learners reach a plateau.

Advanced Spanish speakers generally have enough vocabulary and conversation experience to get by, but further progress can start to slow down as the excitement of learning something new starts to fade.

Reading for fun is a great way to renew your excitement about learning, improve your comprehension and learn new vocabulary. In the early stages of learning a language, it’s best to stick with modern books as the language is much easier and will be more familiar to you. But, when you’re an advanced learner, it’s safe to start reading the classics.

Philosophical reads are great choices for advanced learners as they provide opportunities to explore life’s big questions in a language other than your native tongue.

A philosophical novel not only opens your mind and helps you see things from another perspective, but it also provides all the vocabulary needed to deepen your conversations in the Spanish language.

The following books will dramatically improve your Spanish and introduce you to more sophisticated vocabulary—simply by engaging your mind and getting you thinking about some of life’s biggest questions:

First published in 1635, “La vida es sueño” (Life Is a Dream) is a philosophical Spanish-language play about human existence and the meaning of life. It explores themes such as free will, fate, the relationship between father and son, and the idea that life is nothing but a dream within a dream.

“La vida es sueño” is a classic of Spain’s Golden Age and will help learners get a better feel for the culture and its history. Even if you barely consider yourself an advanced Spanish learner, this text should be manageable for you. The play is short, making it a fairly quick read even if takes you three times as long to read in Spanish.

“Oráculo manual y arte de prudencia” (The Art of Worldly Wisdom) was written in 1647 with a collection of 300 maxims (and commentary) providing guidance on how to live fully and be the best person you can be.

The style of this book is considered a prime example of Conceptismo (conceptism), a literary movement of the Baroque period in Spanish and Portuguese literature. Conceptismo is characterized by its candor, fast-paced rhythm, simple vocabulary, wordplay and witty metaphors. The last two elements are referred to as agudeza (wit) in Spanish.

This is an excellent choice for advanced learners looking for a fun and inspiring read. The simple vocabulary makes it easy to understand, but it still provides a challenge as it exposes the reader to wordplay and metaphors that you wouldn’t necessarily be exposed to in day-to-day conversation.

Each phrase is like a puzzle that’ll help improve your understanding of the Spanish language and offer you some wisdom for living your best possible life.

“El hablador” (The Storyteller) was first published in 1987 by Peruvian author Mario Vargas Llosa. The story takes place in Peru in the early 1950’s. The plot surrounds a university student who leaves civilization and joins an indigenous tribe, but finds it difficult to leave his ingrained Western mindset behind.

Similar to its title, the author plays with the idea of storytelling and whether one can ever convey the full truth without subjectivity. The novel alternates between two narrators, the main character of the story and the storyteller of the Machiguenga tribe. In such tribes, the storyteller holds the crucial role of passing down traditions, culture and history. The novel explores the effect of globalism and the loss of indigenous cultures. The author questions the idea that such cultures are primitive and set in stone.

This is a great choice for advanced Spanish learners due to its erudite language and blend of tribal mythology, providing both a cultural and literary experience. It’ll also provide a philosophical and cultural perspective of life in indigenous Peru.

“Niebla” (Mist) is a nivola written in 1907. The term nivola was coined by Unamuno to describe a work that isn’t quite a novel or novella. This nivola is fairly abstract and has an existentialist feel, perfect for the philosophically inclined.

In the story, the main character Augusto falls in love with two women but chooses to propose to one. She winds up leaving him for another man. When this occurs, he seeks to kill himself but decides he must consult Unamuno (the author) first. When he does so, he learns that he’s only a fictional character.

Upon hearing this news, he suddenly finds a will to live and asserts that he’s real, reminding the author that he himself may just be a character in God’s dreams.

The majority of this book is dialogue, making it a perfect read for a Spanish language learner. The book contains many philosophical quotes as the author plays with the nature of existence.

“Niebla” is also a great choice for learning Spanish as it was made into a film. After you read the book, you can watch the movie (in Spanish) and see the dialogue come to life on the screen.

“La celestina” was first published in 1499 and is considered one of the greatest works of Spanish literature. The novel is written entirely in dialogue and can be read as a play.

The dialogue is filled with proverbs written in Old Spanish vernacular, making for a challenging and thought-provoking read for the advanced Spanish learner.

There are annotated editions available specifically for Spanish learning, which provide background information and explain the meaning and usage of certain words and phrases. There are even versions which have adapted the work to modern Spanish language.

This book marks both the end of the Middle Ages and the beginning of the Renaissance. Though not the most philosophical of the list, it contains elements of emerging capitalism, prostitution, classism, romance, tragedy, egoism and the supernatural.

“Cien años de soledad” (100 Years of Solitude) is perhaps the most popular choice of novel for the advanced Spanish learner.

Written in 1967, this classic has been translated into 37 different languages, so there’s a pretty good chance you’ll find a copy in your native language for you to read after you finish the Spanish version.

The plot follows the lives of one family for seven generations. This novel explores many themes. It blends the mundane with the supernatural, plays with the concepts of linear and cyclical time and contrasts fate with free will.

The main theme of the novel is solitude and the effects of egocentricity. The novel explores the consequences of the “every man for himself mentality” and compares that with actions taken from a place of love.

This book will surely provide a challenge even to the most advanced Spanish language learner as it can be a daunting read for native speakers. Known for its challenging vocabulary, nuanced literary style and complex metaphors, reading this novel is sure to provide a stimulating learning experience.

These novels are sure to stimulate your mind and improve your Spanish skills!

Brittany Tackett, MA is a freelance writer, tutor, transformational life coach, world traveler and Spanish language enthusiast. She took her first Spanish course at the age of 14 and has been fascinated with the language and culture ever since. Learn more about Brittany and her services on her website.