However, jumping in head first can be overwhelming.

You may have tried watching something, only to catch the gist of a few scenes and hit “pause” after feeling thoroughly discouraged.

Many Japanese language learners find themselves in this scenario.

Fear not! There is a way for you to improve your Japanese while doing what you love.

Instead of dramas, why not watch a kids’ cartoon?

You might be thinking, “Hey, wait a minute. I’ve already read about learning Japanese with movies and how to speed up language learning with subtitles. And I’m not a child, after all. Why should I try watching something that doesn’t even target my age group?”

Here, I’ll share some fantastic reasons why kids’ cartoons are fun and super effective language learning resources. First, we’ll look at a few tips for learning from a cartoon. Then we’ll explore the top 5 Japanese kids’ cartoons guaranteed to boost your Japanese studies.

The Benefits of Learning from Japanese Cartoons for Kids

Learn Japanese language and culture like a child would.

What are kids like when they learn about the world around them, or tackle on a new subject in school for the first time? They are often described as little sponges, naturally absorbing all of their new experiences and surroundings.

It doesn’t just stop there—children are also inquisitive. They ask lots of questions. And if they encounter something that they haven’t before—a new word, phrase, action or concept—they try it out without fear of failure. That’s why kids are notorious for saying the darnedest things.

Doesn’t this sound like a great approach to take when learning a new language? There’s no doubt that constantly speaking Japanese is one of the best ways to boost your conversational Japanese skills. For the Japanese learner—especially the high-beginner to lower-intermediate—watching Japanese kids’ shows helps bring out the curious child in you.

Kids’ cartoons—even the sillier or more action-oriented ones—are meant to be educational to some degree. Because they’re aimed at kids, they introduce and reinforce important cultural aspects that adult dramas take for granted. Japanese kids’ cartoons will sometimes devote entire episodes to things like holidays, events or seasonal activities, so you can immerse yourself and achieve a greater understanding of the culture than you might otherwise via an anime or drama.

Some have fantastical stories that go all over the place (especially when stretched out over a year-long series), but even then, the basic plot lines are still fairly simple and take place in familiar, everyday settings, like schools and homes.

That means you’ll become familiar with all the everyday phrases you need to speak Japanese properly. Japanese beginners—or those who have difficulty with listening comprehension—will also be happy to know that Japanese kids’ cartoons use simpler language than that of dramas and anime.

The characters speak more slowly, and the dialogue is typically standard, casual Japanese, without the idiomatic phrases or regional dialects that can make anime hard to understand.

More than anything, Japanese kids’ cartoons are just plain fun!

Japan’s kid-oriented programming is world-famous for its creativity and humor. In fact, cartoons aren’t only for kids in Japan. Adults love them, too! There’s a reason why language learners at FluentU are regularly using Japanese kids’ cartoons to absorb vocabulary and grammar.

Long-running shows like Sazae-san and Doraemon are so popular that they consistently hit the Top 10 in Japanese TV ratings week after week.

Doraemon has also spawned several spin-off movies that have made millions of dollars over the years, and even an American remake on the Disney XD channel! Watching Japanese kids’ cartoons, your confidence will build dramatically because you’ll be better able to watch the show at the same level as your Japanese friends. You’ll laugh along at the jokes, and cry along at the touchy-feely parts.

5 Great Japanese Kids’ Cartoons to Level Up Your Japanese 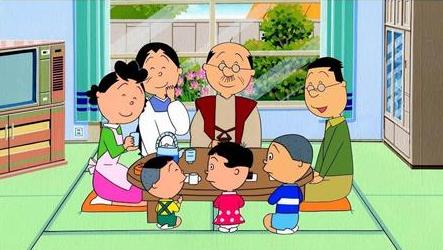 Sazae-san is more than a kids’ show. It’s a cultural institution, a national treasure and the longest-running animated series in the world, ever!

It’s about the Isonos, a typical Japanese 大家族 (だいかぞく – big family) living together in Tokyo. The central character is サザエ, an outspoken but somewhat clumsy woman in her early 20’s, living with her husband, son, father, mother, brother and sister all under one roof.

All of the characters are colorful and funny, and all are named after fish! (サザエ is horned turban, a seafood delicacy.) サザエさん started off as a comic strip, but is now better-known as a cartoon. It is not unusual for families to plan their Sundays around its 6:30 p.m. time slot. 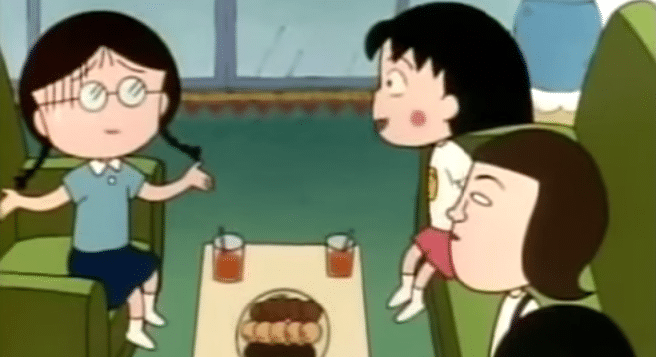 Airing right before Sazae-san at 6:00 p.m. is Chibi Maruko-chan. まる子 is a precocious and kind-hearted 小学生 (しょうがくせい – elementary school student) who lives with her 大家族 (だいかぞく) in Shizuoka.

Each episode of Chibi Maruko-chan follows a simple plot: Maruko goes to a 銭湯 (せんとう – bathhouse) with her grandfather, Maruko’s classmate learns to ride a bike, and so on. But Maruko’s wild imagination always makes things more dramatic—and more fun, too! Chibi Maruko-chan is also a manga and many of its collections have been published in English. 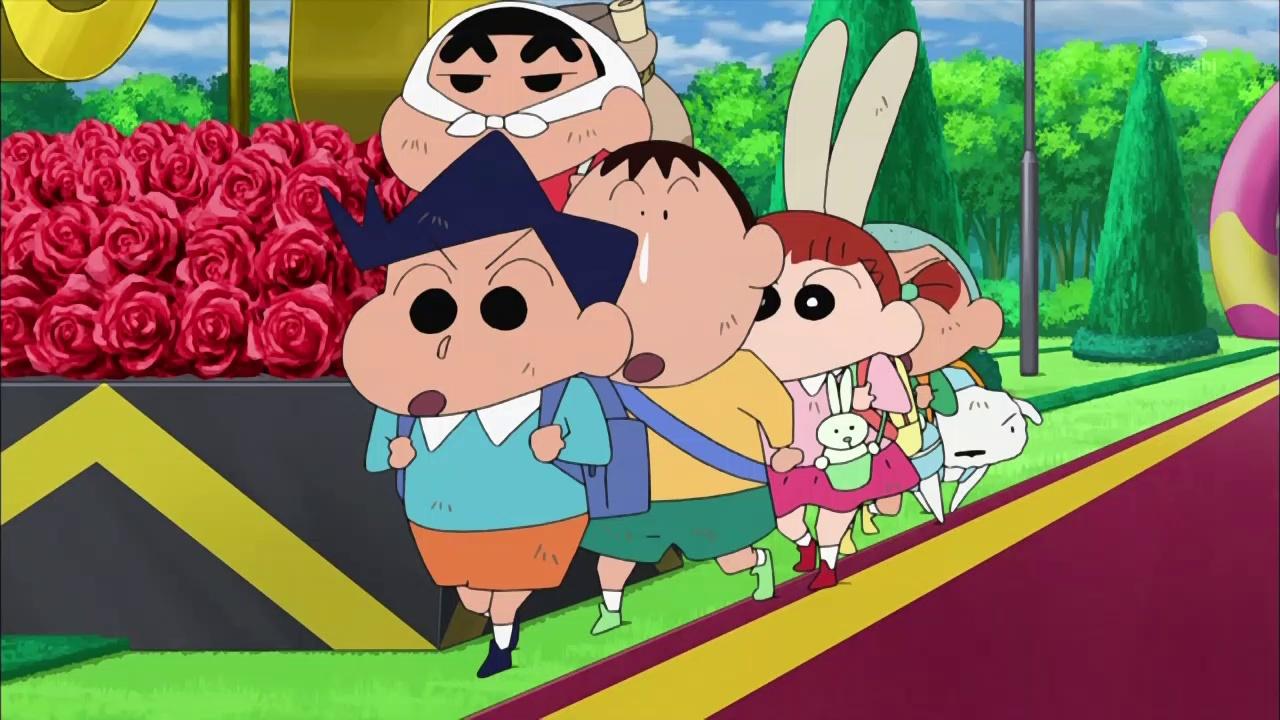 Where Sazae-san and Chibi Maruko-chan center around the 大家族 (だいかぞく), Crayon Shin-chan features a more modern 核家族 (かくかぞく), or nuclear family. The main character is Shinnosuke, a frank kindergartner with a mischievous streak. He can’t resist the urge to pull down his pants and wiggle his butt, and he loves to point out his mom and dad’s fallacies.

Maybe that’s why Crayon Shin-chan has repeatedly earned the distinction as the show Japanese parents feel least comfortable letting their kids watch. But while Shinnosuke’s manners may not be the best, and he’s not the sharpest tool in the shed, he’s got a heart of gold and every episode of Crayon Shin-chan usually has a message it wants to send somewhere among all the butt-wiggling. 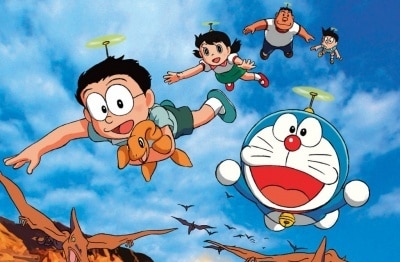 Crayon Shin-chan may be divisive, but pretty much everyone in Japan agrees that Doraemon is the king of Japanese kids’ cartoons. Doraemon (ドラえもん) is a cat-shaped robot that has come from the 21st century to help his owner’s great-great-great-great grandfather, Nobita Nobi.

Nobita is a lazy elementary school student who gets bad grades, always gets yelled at at home and can’t stick up for himself on the playground. But ドラえもん has a 四次元ポケット (よじげんぽけっと). That’s a crazy, 4th dimensional pocket, from which he can produce all kinds of cool items to help Nobita when in need.

Like many of the cartoons I’ve discussed here, Doraemon is also a manga, and its most famous stories are known by almost all Japanese. Try asking your language exchange partner which ひみつ道具 (ひみつどうぐ– secret tool) they’d like to have from the 四次元ポケット (よじげんぽけっと)! 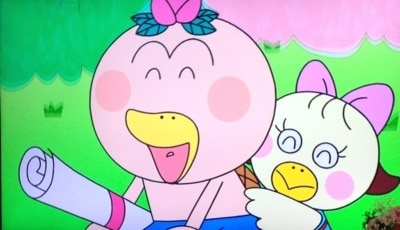 Do you know what a かっぱ (kappa) is?

It’s a creature of Japanese folklore that is said to lurk in rivers and streams. Japanese cautionary tales and superstitions like this are always fun to learn about.

In the olden days, Japanese parents told their children かっぱ stories to warn them not to play in the water. The traditional image of the かっぱ is of a slimy, scaly creature with a weird beak for a mouth. These days, the かっぱ has taken on a cuter, more cuddly image—case in point, Hana Kappa, a かっぱwith a flower on his head!

Hana Kappa’s flower keeps changing depending on his mood or whatever fix he’s in. This frustrates him because he wants to have the same flower all the time, like his friends have. Meanwhile, he has to thwart the evil yet incompetent Garizou, who wants to steal Hana Kappa’s flower for his master. At only 10 minutes per episode, Hana Kappa is a manageable watch, and is one of the more unique and interesting Japanese kids’ cartoons for its mix of Japanese traditional storytelling and contemporary plot-lines.

Love learning with these colorful cartoons?

If that’s the case, head over to FluentU to learn get maximum language learning value from even more Japanese kids’ cartoons.

FluentU even uses a learning program which adapts to your specific needs to turn every video into a language learning lesson and get you to actively practice your newly-learned language skills.

Access FluentU on the website to use it with your computer or tablet or, better yet, start learning Japanese on the go with the FluentU app for iOS or Android!