Have you heard of Japan’s yuru-kyara mascots?

Each mascot is like an anime character come to life.

We all know (and love) that Japan has a not-so-secret eccentric side.

Modern Japanese culture celebrates the sugary-sweet and the downright adorable like no other.

Well, the nation’s recent obsession with the yuru-kyara might be going a little overboard.

You might be wondering, “What’s so strange about oversized stuffed animals? All our sports teams have mascots, too.”

Sure, you’ll hear about these guys when you learn Japanese baseball vocabulary and acquire soccer lingo. But it goes far beyond that.

First off, Japan’s national mascot obsession has left the country positively overrun. There are now so many that people are losing track of which mascot is which, as well as the products, teams, programs, organizations and social movements they were created to represent in the first place.

It’s gotten to the point where the Japanese government has actually had to start cracking down with mascot population control. This has spurred on public outcry and intense debate over which mascots should have their lives spared.

After seeing museums, schools, prisons and even the military join the yuru-kyara craze—that’s right, the Japanese army, navy and air force now have stylish anime representatives—I had to find out if there was another purpose behind the mascots other than simple entertainment. Is there something more behind those big synthetic eyes?

Keep reading and get informed, because you’re bound to encounter these bizarre, colorful characters while traveling in Japan.

From cute to creepy, yuru-kyara are still on the rise in Japan. They prance around street fairs, sporting events, community gatherings and tourist destinations. The combination of the word yurui (loose or relaxed) and kyara (character) is a perfect way to describe the quirky mascots—some of which have already gained international recognition.

Like an invasive animal species, mascots took over Japan when just two influential mascots gained a strong foothold in their new territory. Nowadays, the whole world has come to learn about them through news sources, bloggers blogging about Japanese language and culture, popular movies and television shows.

Learn about the first, trailblazing mascots who gained immense nationwide popularity and transformed yuru-kyara into a part of modern Japanese culture: 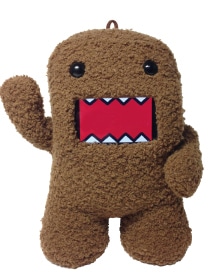 You don’t have to be at an anime convention or comic shop to identify NHK’s well-loved Domo-kun. The rectangular and somewhat odd mascot made his first appearance in Japan in the late 90’s and has been a hit ever since.

It’s now been ten years since his first debut in a short stop-motion sketch, and the furry mascot has been a campaign icon for overseas companies such as Target. his merchandise constantly makes appearances in popular stores like Urban Outfitters. 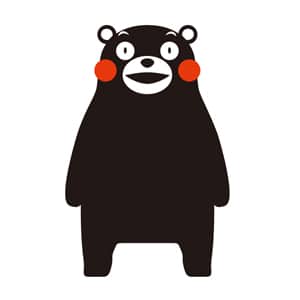 Kumamon is one of the best examples of a mascot success story. Straight from a fairy tale, this rosy-cheeked, bear-like mascot represents Kumamoto prefecture in southern Japan. Since his first appearance promoting the Kyushu Shinkansen (bullet train) in 2010, Kumamon has reeled in the big bucks.

The Bank of Japan announced that “Kumamon’s economic effect on the prefecture amounted to 124.4 billion yen over the past two years.” If you’ve yet to see Kumamoto’s star, you can catch a glimpse at Kumamon-themed hotels and trains, on packages of cookies and even on Japan Airline’s special  “Air Kumamon” package on international flights.

Why Japan’s Mascots Are About More Than Money

Fast-forward to today, where there are over 40 mascots representing Osaka’s prefectures alone. With Kumamon’s advertising value of nine billion yen, it’s no wonder why groups ranging from Japanese political parties to local museums are jumping on the bandwagon.

There are mascots who fight for solar power and tax reductions. There is even a mascot out there whose life mission is to sell you chicken giblets (yum), and another who is made entirely out of fried food on sticks (double yum). But some claim that the raging mascot trend isn’t all about merchandise and money.

Not only do mascots help promote regional tourism, but they also educate an otherwise detached audience about local culture and community. When I think about it, I could probably be suckered into learning about anything if Hello Kitty was presenting the subject.

Furthermore, some major mascot fans have put forward that Japan may have embraced this diverse cast of characters so readily because one of the nation’s most widely-practiced religions, Shinto, is polytheistic.

It may seem wild to think that these big, fluffy dolls have some deep religious, cultural or sentimental meaning, but it’s quite evident that there is much, much more to this phenomenon than meets the eye.

Competition between yuru-kyara is fierce. While some mascots may be approved and promoted, their livelihoods depends on their popularity. It’s a challenge to win the public’s heart by finding the perfect balance between cute and memorable.

This is why some yuru-kyara creators have turned to making characters kimo-kawaii (gross-cute). The strategy seems to be working, since media and tourists alike can’t get enough of these gross-cute characters: 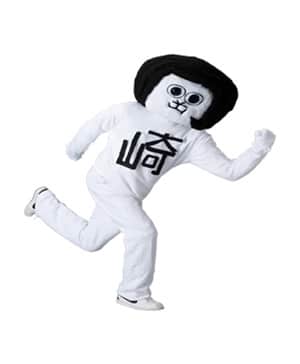 Representing Okazaki City (Aichi Prefecture), Okazaemon is a prime example of creepy-cute. Clad with his signature afro, unsettling stare and white full-body jumpsuit, Okazemon is the last figure you’d want to see peering into your bedroom window from the darkness outside.

There are a handful of ski mascots in Japan, but Reruhi-san may be the most popular. The mascot is based on Theodor Elder von Lerch, an Austrian Major General who went to Japan as “an ambassador to winter leisure sports.” His outfit is somewhere between a snowsuit and an old-fashioned pair of pajamas. His misaligned, off-kilter eyes were designed to stare at you in your nightmares, while his “oopsie daisy” expression is meant to convince you that he is not trying to murder you in your sleep. 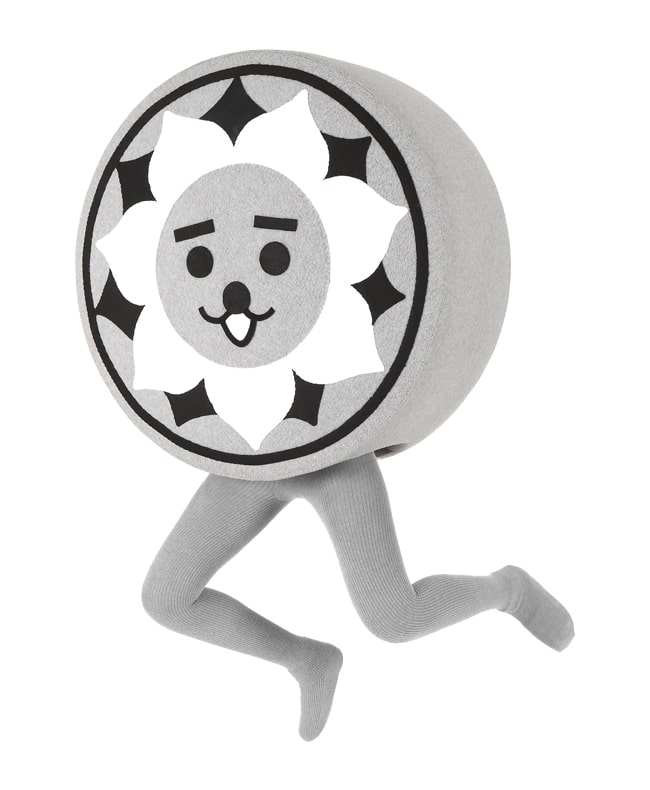 Perhaps more creepy than cute… or is he more cute than creepy? It appears to be some kind of dog trapped in a flower trapped in a hatbox, but perhaps it’s better not to think too hard about what this creature really is.

Somehow, the orb-shaped, spandex-wearing mascot won the hearts of many in 2011 when he was awarded 3rd place in the 2011 Mascot Grand Prix. 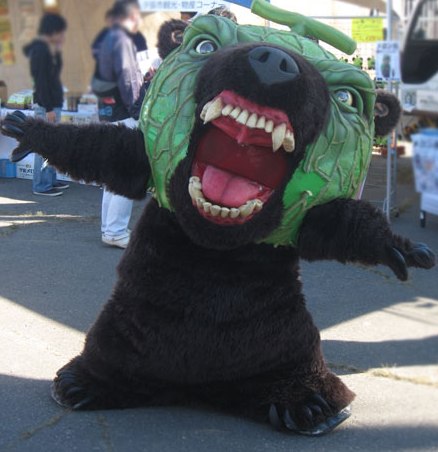 Only the most creative mind could have dreamed this guy up. While it looks like some kind of zombie-bear or bear transforming into the hulk, after a bit of Googling we discovered that this thing is actually called Meron Kuma, or “Melon Bear.” Oh, well. We at least got the bear part right.

This ungodly merger of grizzly and melon has a Facebook page dedicated to pictures of him ruthlessly chomping on other mascots (and even tourists).

Strangely enough, his plush dolls and other merchandise show that, when he’s not dripping with the blood of foreigners and competing mascots, he can be quite cute.

While meeting with clients at my office in Japan, the topic of hometowns was brought up. One client mentioned his hometown yuru-kyara and soon the whole group had joined in, discussing their favorite mascots.

It’s hard to pinpoint the true reason why we obsess over these kinds of things.

It reminded me of being a child and raving about my favorite Pokémon characters with my friends. Only, these were grown men excitedly chatting about which mascot was most popular this year.

Each mascot represents a company’s or prefecture’s characteristics, and is used primarily for public outreach. It feels quite appealing and personal to have a mascot advertise for a company on social networks.

There are plenty of other good reasons to enjoy yuru-kyara:

Common Prefecture Yuru-Kyara You Should Know

If you’re traveling within Japan, you’ll probably run into the following mascots quite often. Each character represents a specific prefecture in Japan, and each one comes with its own uniquely appealing accessories and merchandise. 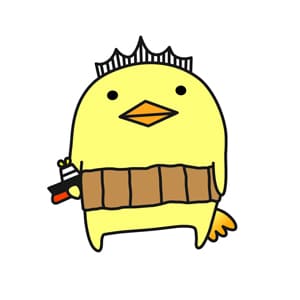 This cute and cuddly, bird-like mascot who won first place in the 2012 Mascot Grand Prix (and came in second place in 2011). Any Sanrio fan will find themselves swooning over Emabari City’s crowned chick. 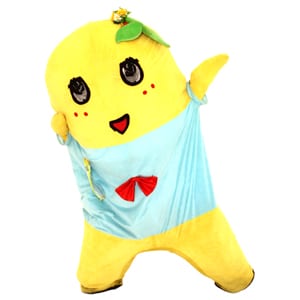 A few things contribute to Funassyi’s unique pear-inspired character. Unlike most mascots, who are silent and relaxed, Funassyi talks as fast as he moves. Funassyi is one of the most popular yuru-kyara in Japan, but remains an unofficial representative of Funabashi, Chiba. This doesn’t stop him from appearing at events or on TV, or affect his 200 million yen revenue. 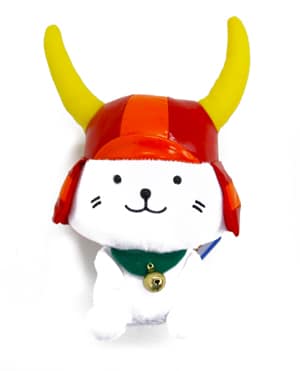 Based on a legend, the representative of Hikone Castle is a feline mascot named Hikonyan. Hikonyan wears the same samurai helmet that can be seen at the Hikone Castle Museum. 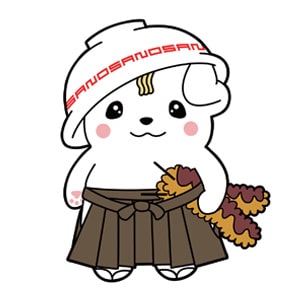 Sanomaru can’t get much cuter with his big, puppy eyes and a bowl of ramen spilled over his head. He won the 2013 Mascot Grand Prix and makes appearances all over his city (Sano City).

Other popular regional mascots include, Fukka-chan, Shusse daimyou Ieyasu-kun, Shimanekko, and Guma-chan. You can find what they’re up to on their blogs, Facebook or Twitter (yes, they all have their own social media profiles!).

Every year since 2010, the Mascot Grand Prix (ゆるキャラグランプリ) is held where new and old mascots are cast into the competition and voted on by the public. In 2010, there were nearly 170 mascot entries and about 240 thousand voters.

Three years later, 1,580 mascots participated in the Mascot Grand Prix, and over 17 million votes were cast. The Mascot Grand Prix allows characters to be submitted and voted on by the general public. Companies are also allowed to participate in a separate competition from prefecture mascots. 335 company yuru-kyara competed in 2013 with the mascot Koosuke (コーすけ) taking first place.

Winning the Grand Prix gives a mascot a good boost in popularity and national attention. It doesn’t seem like the yuru-kyara trend is going away anytime soon!