There’s actually a load of really cool ones out there based on intriguing stories for adults.

And did you also know that comics and graphic novels can help you to learn German?

I’m going to tell you how you can strengthen your German language skills with some fantastic comic books!

Classic novels—and even some young adult books—books can be a hard slog, especially when you’ve got a whole load of other work or studies to get done. With comics, getting your German reading practice in is a whole lot easier. The text is broken down to usually only include any dialogue. What’s more, all the comic strips will help you follow the story.

Don’t worry about getting stuck in paragraphs of endless in depth descriptions—using only short snippets of dialogue and detailed illustrations, you’ll be able to fly through comics!

So if you’re a beginner in German or someone who isn’t really into reading in the first place, comics are a good starting point to help build your way up to the big novels!

Another plus of comic books not being too heavy in their use of language is that it makes them super easy to translate. So you won’t have to stick to German comics as you can guarantee that your favorite English language comic will have probably been translated for the German market.

If you ever find yourself with only 10 minutes before you have to dash out the house or have some spare time before your favorite TV show begins, why not flick through a comic book to squeeze in some German learning!

The name for Sarah Burrini’s web comic comes from a German idiom, which basically translates as “life isn’t all a bed of roses.” However, literally it translates to “life ain’t no pony farm.” A weekly comic is published on Sarah’s homepage. Most of the comics come from her very own pen, but she does often showcase work from guest comics and illustrators. 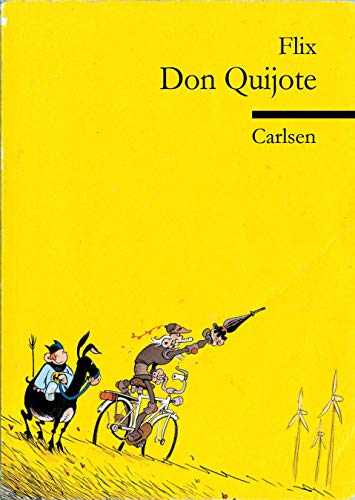 The Frankfurter Allgemeine newspaper commissioned this comic recreation of the famous “Don Quixote” novel. Created by illustrator “Flix”—real name Felix Gordon—it has been published as a cute yellow book.

One of the many English language comic books to be translated into German, “Berlin” was created by Jason Lutes. Originally published as 16 comic strips, they have now been published over two books. Focusing on the German capitol during the 1920s, the comic follows art student Marthe Müller.

Ulli Lust is possibly one of the most popular German language comic illustrators. She regularly publishes mini-comics online, but also has a fantastic selection of graphic novels to choose from.

“Heute ist der letzte Tag vom Rest deines Lebens” is possibly her most popular. The autobiographical comic is based on the summer of 1984, in which she went backpacking around Italy.

Adrian von Bauer’s intriguing comic book is about a first date between Kieran and Tasmin. After a slightly awkward start, things get exciting after a portal into a new dimension opens and throws them into an adventure!

“Liebe und Monster” has been translated into English, so should you get stuck on the German you can always pick up an English copy to help you out!

On Tim Gaedke’s website you’ll find a great selection of quirky web comic strips. They’re also in English, so you can check to make sure you really did understand everything in the German versions! He also sells his own comic books, all of which you can browse on his site.

The English illustrator Raymond Briggs’ heartwarming comic book has now been translated into German! In the comic, Briggs tells the story of his parents, Ethel and Ernest, from their meeting all the way through their lives up until their deaths.

Chances are you’ll have heard of Felix Mendelssohn, the world-renowned classical composer. Well, now it’s time to find out about his two sons, Karl and Paul. In this edition of Elke Rentate Steiner’s comic book, Karl’s life story is retold in flashbacks by his younger brother, Paul.

Created by the illustrator Mawil, “Kinderland” is set in the GDR (German Democratic Republic) and former East Germany. This autobiographical graphic novel is set in 1989 and looks at life under Communist rule through the eyes of a child.

How to Improve Your German with Comic Books

One way to make the most of your comics is to use them to create a German vocab list.

Every language learner needs a vocab list, no matter their level! If you have all your weak words—or words you don’t know—together in one place, you’ll be able to work on them all at once. When you’re reading your comic and come across a word you need to look up, simply add it to your list! Keep returning to the list to test yourself, and eventually you’ll build up your bank of vocabulary.

Besides vocabulary building, comics are surprisingly pretty effective material for speaking practice. Get some friends over, divide the comic characters between you and have a go at acting out the scenes. You don’t have to go to the trouble of getting too theatrical about it—just hang out on the couch and read the lines to each other, helping each other with pronunciation as you go.

Another way to get conversation and listening practice using German language media is by watching German web videos about topics that interest you. FluentU is a language learning platform that teaches you German by immersing you in authentic German videos like movie trailers, cartoons and TV clips.

FluentU’s videos can be sorted by topic and difficulty level, so you can find content that holds your interest at a level you can understand. The videos also have interactive captions, aiding with your comprehension and letting you get reading practice as well.

Videos, like comic books, are a great way to learn a language by experiencing how it’s used in context. The visual aid of video or images helps your brain memorize meanings faster than if you were just reading translations out of a textbook (especially if you’re a visual learner!).

Feeling inspired by all the German comic books you’ve been reading? How about getting creative and making your own?! Just like reading the comic with friend’s doesn’t have to be too elaborate, this doesn’t have to be too artistic, just a few doodles should do. But, importantly, this will give you German practice as you flex your writing muscle!

Hopefully my list will have motivated you to fill your bookshops and coffee tables with German coffee books!

There are absolutely loads to choose from and, as mentioned previously, many English language ones are often translated, creating such a great range of stories!