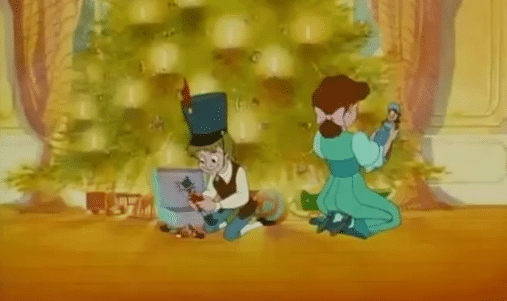 You know how Americans are obsessed with Christmas?

In the U.S., Christmas inundation starts the day after Halloween and lasts through New Year’s.

Well, this obsession is not by any means unique to the U.S.

In fact, Germany is the source of many elements of Christmas that we all know and love today (“The Nutcracker,” anyone? Or the Christmas tree?).

And like Americans, Germans continue to celebrate the holiday through time-honored traditions as well as mass media.

So what better way to learn German this holiday season than through German Christmas stories…told in cartoon format?

Cartoons are an incredibly fun way to learn, and you’ll pick up all kinds of vocabulary and grammar that you can use during the holidays as well as year-round.

To prepare, let’s first take in a quick overview of what you can expect to see in stories involving German Christmas culture.

What Can You Expect from German Christmas?

Weihnachtsmärkte (or Weinachtsmarkt in the singular) are special Christmas markets that appear sometime in mid-November and last until just before the holiday. Visitors to these markets can purchase Christmas gifts, Christmas foods such as gingerbread and holiday beverages such as…

Glühwein is a mulled wine common in Germany and eastern France. This tasty beverage is a staple of Christmas markets—hey, how else are you supposed to keep warm while making your way through an outdoor market at night in winter?

A Weihnachtspyramide, or Christmas pyramid, is a special German Christmas decoration: a carousel with several levels, usually depicting Biblical or holiday scenes, and with a propeller on top that spins with the help of four candles secured at the carousel’s base.

Besides Glühwein, Germans ingest plenty of special desserts at Christmastime, including Christstollen (a special kind of fruitcake) and Lebkuchen (special gingerbread).

The importance of Christmas Eve

Unlike in English-speaking countries, where most celebrations usually take place on Christmas Day itself, Germans also celebrate Christmas Eve, and in fact exchange presents on the night of the 24th instead of the morning of the 25th.

This Christmas season, watch all four of these cartoons and learn plenty of German vocabulary and grammar to use during the holidays and the rest of the year. (Bonus: You’ll learn plenty about German Christmastime culture, too.)

If you watch these and decide learning German with cartoons (and maybe videos in general) is awesome, FluentU has got you covered for the Christmas season and beyond.

Just a quick look will give you an idea of the diverse content you can find on FluentU:

You can tap on any word to look it up instantly. Every definition has examples that have been written to help you understand how the word is used. If you see an interesting word you don’t know, you can add it to a vocab list.

And FluentU isn’t just for watching videos. It’s a complete platform for learning. It’s designed to effectively teach you all the vocabulary from any video. Swipe left or right to see more examples of the word you’re on. 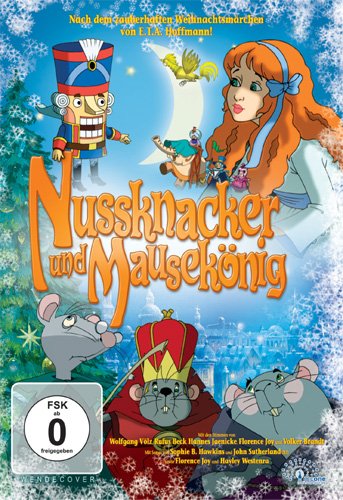 This cartoon is from an 1816 story by E.T.A. Hoffmann, which was adapted into the beloved Christmas ballet “The Nutcracker” by Pyotr Tchaikovsky.

In Hoffmann’s story, a young girl receives a nutcracker for Christmas and it comes to life, defeats an evil Mouse King in her house, then whisks her away to a magical land full of dolls. In the ballet, the Nutcracker takes the young girl to a land full of dancers inspired by various world cultures.

This cartoon version is a direct-to-video adaptation from 2004, and more closely tracks the story in Hoffmann’s original tale, although it uses some music from Tchaikovsky’s famous ballet as well.

Those who can play Region 2 DVDs can check for the DVD on Amazon.de.

Vocabulary you can learn from “Der Nussknacker und der Mausekönig”:

Grammatical constructions to watch out for in “Der Nussknacker und der Mausekönig”:

This is an example of a reflexive verb, or a verb that takes the same subject and object. Reflexive verbs are common in German, so learn this construction!

This is an example of a dative plus preposition construction. It’s a shortened version of in dem Sommer. In is a preposition that takes the dative, and since Sommer is masculine, its dative article is dem. In plus dem equals im. This is a rule usually learned by beginners, but it’s still tricky and can trip up more advanced learners, so pay attention! 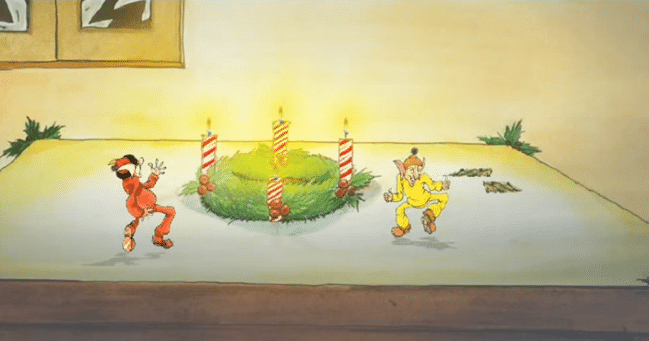 This is a cartoon version of “The Elves and the Shoemaker,” a Christmas story recorded by the Grimm Brothers in their famous book of fairy tales.

“The Elves and the Shoemaker” tells the story of a poor man and his wife who are barely scraping by, but receive help in the night from mysterious elves who help them assemble their shoes. The story appeared in the original edition of “Grimm’s Fairy Tales,” which was published on December 20, 1812—a release date that means these tales are often associated with Christmastime.

This cartoon version is specifically designed for language learners by Bookbox.com.

Vocabulary you can learn from “Die Wichtelmänner”:

der Wichtelmann — a literary term for an imp, dwarf, elf or other supernatural being

in Windeseile — fast as the wind

Grammatical constructions to watch out for in “Die Wichtelmänner”:

Obwohl is a word that appears in subordinate clauses and necessitates moving the verb to the end of the clause. This example of obwohl is particularly useful because it’s an example of the word appearing at the beginning of the sentence. This may make you think that obwohl is part of the sentence’s main clause, and that the verb should appear in second position. However, in this sentence, the subordinate clause appears first.

This is an example of an um…zu construction, which is a way to say that you are doing something in order to achieve a desired result.

Watch out for the other uses of the literary past tense in this cartoon!

This is a Christmas-themed episode of an animated version of a popular German children’s book.

The 2000 book, by Kirsten Boie, tells the story of a young girl named Tara whose family moves to a community called Möwenweg, where she’s happy to find lots of nice neighbors and other kids to make friends with.

In this episode, Tara is impatiently waiting for Christmas to arrive, and must distract herself with Christmas decoration and cooking preparations.

You can buy the DVD on Amazon.

Vocabulary you can learn from “Wir Kinder aus dem Möwenweg”:

Grammatical constructions to watch out for in “Wir Kinder aus dem Möwenweg”:

This is an example of a verb that takes a certain preposition—in this case, freuen plus auf.

Notice that eigenes, which means “own,” has its own special ending based on the case and the gender of the noun in the sentence—just like any other adjective.

Here’s an example of the passive voice in German, a construction that uses the verb werden (which is a word that you’ll see a lot in the German language). 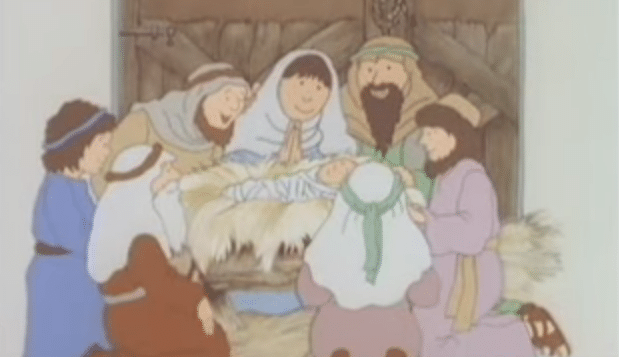 This is a German cartoon version of the original Christmas story, from the Bible, of the birth of Jesus.

Whether you celebrate Christmas for religious reasons, for secular reasons, or both, watching this video will teach you plenty of interesting vocabulary. And plus, most people know this story—so you’ll be at an advantage while watching this in puzzling out the meaning of various vocabulary words.

Vocabulary you can learn from “Weihnachtsgeschichte”:

Grammatical constructions to watch out for in “Weihnachtsgeschichte”:

This is a great way to explain to someone that something appeared in a certain way (even if it didn’t).

Deshalb is a word used in a subordinate clause. Pay special attention to the word order after deshalb; the verb goes in the second position, and the rest of the words follow after.

This is an example of the German genitive, or possessive case—perhaps the rarest of the four cases, but still essential to know.

If you watch all four of these videos, paying attention to vocabulary, grammar and the German cultural lessons imparted in each, you’ll close out the year having bolstered your German skills.

So study up this Christmas season, make a New Year’s resolution to keep your momentum going and, of course, enjoy the holidays!