Take your love of cards to a whole new level with some unique and popular German card games.

They won’t just get you strategizing and swiping cards in new ways, they’ll also give you a fun glimpse into German language and culture.

Whether you’re already a German learner or just like the idea of shouting “Mau-mau!” while laying down cards (more on that below…), check out these Kartenspiele (card games) to suit every player and occasion.

Before we get started, let’s deal out the German phrases you need when playing cards.

Do you know the names of the suits in German? If not, then here they are!

An Ace is an Ass (yes, really!). A Jack is a Bube, because he’s a babe, I guess… No, really, Bube is an old-fashioned German word for “boy.” A Queen is a Dame (which translates to “lady”) and the King is the König (literal translation this time).

Is someone playing dirty in the game? Then yell out, “Hey, du schummelst!” (“Hey, you’re cheating!”)

If you’re all by your lonesome, but still in the mood for a good card game, play a few rounds of the German solitaire game Auf Wiedersehen (Farewell).

To play this game, you need a standard deck of 52 cards. Start with 12 cards laid out face up in three rows of four. Four additional cards are placed face down on the table.

You need to rearrange the cards at the top so that they run from Ace to King. Place the additional cards under the correct suits in order. Now draw a card from the deck and place it where it belongs, if possible. If you pull a King, you can start a new row. 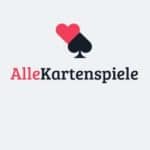 Once you’ve finished laying out all the cards you can, turn over the four cards still laying face down on the table. If any of these cards are an Ace or a King matching the top card in the rows, you’ve lost.

Get the full instructions (plus a workout for your German reading skills) on the German card games website AlleKartenspiele.

The next German card game you can play by yourself is called Die Farbenelf (roughly, “the colorful eleven”).

To play this game, shuffle a standard 52-card deck, then lay out four rows of four cards face up. In these 16 cards, you look for two cards of the same suit with a total value of 11. These pairs can now be laid aside and the gaps filled with new cards taken from the deck.

The Jack, King and Queen can only be removed if they’re taken from the deck at the same time and have the same suit. The goal of the game is to use up the deck and get rid of all the cards.

This is a great game to work on your German numbers and counting skills.

Each of the games listed here can be played by two to five players.

Quartett (Quartet) is one of the most popular kids’ card games in Germany, and has been for a long time. This game is basically played the same as Go Fish.

The goal is to get four of the same type of card (four sixes in all the suits, for example). Each player asks another player for a card they need to make a set of four. If the player has the card, they have to hand it over. If they don’t have the card, it’s their turn to ask.

Although you can play Quartett with a standard 52-card deck, most kids play with a special deck that features animals facts, trains, planes and automobiles, famous sports stars, etc. These make Quartett the perfect game for learning or practicing basic German vocabulary topics.

You can also buy plenty of quirky and/or naughty Quartett decks for a more adult audience, like a Quartett deck of dead rock stars, one featuring addictive substances and, last but not least, the sexy dirndl deck.

The German card game Mau-Mau is similar to Uno. Each player is dealt five to six cards. The top card of the deck is then turned over. The player can either lay down a card of the same suit or the same number—for example, a 10 of Diamonds on top of a 10 of Spades.

Böse Dame (Evil Queen) is similar to the game Hearts, only you want to end the game with high points, not the other way around.

This game is only played with Aces, Kings, Queens, Jacks, Tens, Nines, Eights and Sevens. The points you get for the cards are as follows:

Like Hearts, the Pik Dame (Queen of Spades) is the evil queen here indeed. If you end up with this card at the end, you get -50 points!

You lay down cards of the same suit and the player with the highest card takes the pile. If you don’t have the suit, but you have the Queen of Spades, you can play her and pass her on to another player. If the Queen of Spades is played, you can “stab” her with the King or Ace of Spades. Play this card, and she’ll go back to the person who laid her down.

If you really want to get into the world of German card games, then I have two words for you: Doppelkopf and Skat.

Both of these popular games can be played for hours upon hours. There are many game clubs dedicated to both and they have their own tournaments throughout Germany as well as other German-speaking countries.

Doppelkopf (roughly, “double-head”) is a game for four players in teams of two. However, you don’t know who your teammate is until later in the game.

The rules for Doppelkopf are too complex to go through here, but the video below has a thorough description in German with English subtitles:

The other granddaddy of German card games is definitely Skat. Skat is a game for three players and is played with a 32-card deck, either French- or German-suit. The suits have different values, with Clubs or Acorns boasting the highest points, 12.

The rules for Skat are even more complex than Doppelkopf, but you can learn more from this thorough article and the video below (both in English).

Streaming, surfing, scrolling–nee (nah)! Go old school today with one or more of these German card games we’ve taught you here (but you can bring in some modern technology by listening to German tunes on Spotify to put you in the mood for good old Kartenspiele!).

And you don’t always need to be playing card games, you can watch them too in order to sharpen your German skills. The internet is full of great resources to learn real German in an authentic manner.

For instance, you could head over to Twitch.tv to see streamers play card games together and see how they talk about the game and to their opponent, on top of how they interact with their viewers.

Or, FluentU’s language learning program offers a library of native media that can be filtered based on difficulty and topic of interest. This way, you can find an interesting clip on games, as well as on many other topics, to hear the language in action in an authentic way.

After all, if you like authentic German card games, you’re probably the type of German learner who wants to learn the real language—the way native speakers use it.

Rebeccah Dean is a writer and educator who has lived in Berlin since 1999. You can read more about her adventures on her blog Rebeccah Travels.