Love “Risk?” 4 Strategy-heavy German Board Games to Add to Your Collection

Put those right out of your mind.

Board games around the world these days are detailed, sophisticated and endlessly re-playable.

And nowhere is that more true than in Germany.

German board games are some of the most interesting ones out there, whether you’re a newbie or a diehard games geek.

They’ll get you strategizing, collaborating and competing—not to mention learning and thinking in German.

In this post, we’ll show you the best that German Brettspielkultur (board game culture) has to offer, with four games you won’t want to put back in the box.

What Makes German Board Games Different?

They’re meant to be an activity for people to sit down and carefully enjoy, not just something that you can keep a child entertained with. They’re meant to encourage strategy and critical thinking, such that even with a bad roll of the dice you’re still not out of the running.

Unlike the games I mentioned before (unceremoniously dubbed “Ameritrash” by much of the board game community), they’re not about conquering another player or hoarding the most money.

They’re more about building off of what other players have been doing and taking the right risks to eventually end up in control.

Why haven’t you heard about them before? Well, these newer, hobbyist board games aren’t something Germany has been hiding from the rest of the world.

They started coming out in the 1990s, and lots of them have English versions, too.

But as they got more popular, so did video games and other electronics, and it turns out that the release of a new tabletop game just doesn’t get as much attention as the release of Nintendo’s latest game.

4 Intriguing German Board Games That Really Make You Think (In German!) The German version is available through Schmidt Spiele online as well as secondhand through various re-sellers such as eBay.

A mysterious island in the middle of nowhere is slowly sinking into the sea—with treasure buried somewhere on its shores.

You’re one of two to four adventurers attempting to find four treasures on the Forbidden Island. This is a cooperative game, so if one player loses, the game is over for everyone.

A series of cards are arranged into the shape of an island, with the players spread out around it. Each player can perform up to three actions per turn, including moving, collecting treasure, transferring treasure to other players and shoring up a flooded tile.

During play, a Die Flut steigt (Waters Rise) card may be drawn at any time, forcing the game board to become smaller and the flood meter to inch toward a skull and crossbones.

The game manual is written in clear and simple language, and with a German dictionary in hand you’ll have no problem learning words related to adventure on the high seas.

Reading and re-reading the cards will fix those words in your mind along with their accompanying pictures. Nothing is better for a memory anchor than a stressful escape scenario!

Remember to check that you’re getting the German version if that’s what you’re after. Brettspiel-Angebote has it on offer, and you can also check other large retailers including Amazon Germany.

Essentially, players represent a number of electrical companies competing to extend their network to power more cities than anyone else. In every round you’ll bid on resources and power plants against other players, choose which cities to expand to and spend your natural resources on power (watch out for your coal reserves!).

The genius is that the game gets faster with every round as the power plants become more efficient. At the same time, though, the player in the lead is actually disadvantaged every turn to maximize strategy and prevent someone from steamrolling through the game.

In a complex (yet easy to pick up) game like this, your German reading will be working overtime as you decipher all of the cards and instructions to maximize your efficiency.

And because this game has been so popular for so long, there are many editions with different maps to play on—some even center on specific parts of German-speaking Europe, so you can learn geography in German naturally as you continue to master the language!

The English version is relatively hard to find, but you can look for the German version from various sellers on Amazon Germany as well as niche sites like BoardGameBliss.

How to play it:

You might have an idea what’s going on just from reading the name. Two to six players take part in a woodland race, fueled by carrots and lettuce.

There are 65 spaces until the end, and you have 65 carrots to spend, each of which propels you forward one space.

Sound simple? Well, you can go as many spaces you’d like per turn, but the carrot cost rises exponentially. And you can’t land on the same space as another player. And you can’t cross the finish line with more than 10 carrots, or any lettuce heads at all.

Moving backward gains you carrots quickly, and discarding your lettuce gains you huge numbers of carrots.

These carrot economics are the reason this game can take upwards of 45 minutes, and the reason that it won Spiel des Jahres (“Game of the Year”) in 1979, the very first year the prestigious award began.

The English version is actually out of print, so it’s easiest to get the German version. You actually don’t need any specific language skills for the game, but you’d be surprised how many German learners might not know their vegetables.

And to make it a challenge, you can calculate the math all in German as you play. Dreißig mal fünf… das sind 150 Karotten… du meine Güte! (Thirty times five… that’s 150 carrots… oh cripes!) 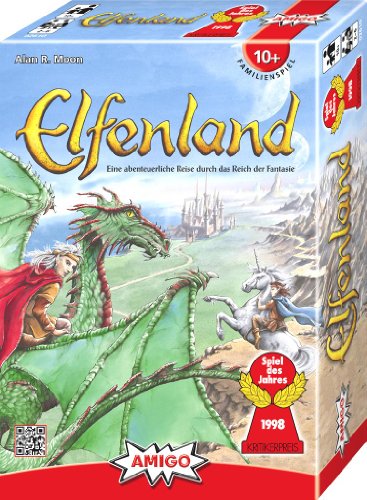 Buy it on Amazon.

In the 17th and 18th centuries, it was a custom for young educated European men to embark on a “Grand Tour” of Europe to broaden their horizons and explore the great cities of the continent.

In Elfenland, young elves do the same thing in miniature. Once your tour is over, you’re considered a true elf.

Your goal is to visit as many elf cities as you can over four rounds of play, deciding during each round which mode of transport to take and which road to go by.

And there’s the rub. Some modes of transportation work much better in some parts of the map than others. Other players can block roads and force them to be opened only to a certain type of transportation. No elf-cycle? Road’s closed for you.

This game is a wonderful crash course in making German compound nouns. Boot and bicycle in German are Stiefel and Rad respectively, so what’s the elf version? Elfenstiefel and Elfenrad, of course!

Getting into any hobby in a foreign language is a great way to make friends and put your skills to the test.

Sit down with any of these games and some German speakers, and you’ll come out of the experience having given your brain a massive workout. If you play too well, you might even end up learning some rude words!

And remember, the German board game scene is enormous. If you have the opportunity, visit the SPIEL board game convention in Essen, Germany, where it’s held every year. Nothing better than going straight to the source!