10 French Pick-up Lines That Are So Bad, They’re Good

The silly futility of pick-up lines exists in French just as much as in English.

And that’s why we can take a look at pick-up lines, as French learners, to get some great vocabulary, constructions and practice with innuendo and deuxième degré (“second-degree” speech, that is, irony) in the language.

Please, please, please, do not actually address your objects of desire with these! We have other, better suggestions for actually flirting in French.

As for the French pick-up lines below, just have fun with them, and test your ability to understand the various levels of meaning.

The literal translation of this is “I dream of soaking my baguette in your soup.” Note that baguette and soupe are not typically French slang for sex organs, but a baguette in France is always quite a long and lovely loaf of bread, so you get the idea.

In fact, baguette can actually be used more normally as slang for legs; so you could say “T’as vu ses baguettes ?” when particularly striking ones are walking past.

This translates fairly straightforwardly: “If the verb ‘to love’ didn’t exist, I would have invented it upon seeing you.”

Aimer is the infinitive form of the verb, so that’s what we employ when we’re talking about the verb itself, and it’s the form that we would find listed in a dictionary.

If you want to more directly make sure your object of affection understands your feelings, you can conjugate it in the first-person present tense: Je t’aime. (I love you.)

Note that the exact same verb, aimer, when used with things or activities means simply “like.” For example: “J’aime le chocolat.” (I like chocolate.) and “J’aime danser.” (I like to dance.)

One translation of this would be, “You should be arrested for excessive beauty in public.”

The verb arrêter, as you may have already learned, means “to stop,” but it can also mean “to arrest.” And voie publique means “highway” or literally “public way,” but is commonly associated with the phrase ivresse sur la voie publique (public intoxication). This very cliché pick-up line turns on that association.

This more modern line means “I have a problem with my phone; it lacks your number!”

The word portable is problematic in French. In addition to being an adjective with the same meaning as in English, it’s very common to use it as short for both téléphone portable (mobile phone) and ordinateur portable (laptop); you have to guess which is meant based on the context when someone only says portable. With any luck, phones will keep getting larger or laptops will keep getting thinner until these actually are the same device.

Note the two punctuation differences from English, for the true grammar nerds: (1) you can have two independent clauses separated by a comma in French, instead of a semi-colon, as you would have in English; and (2) there’s always a space before an exclamation mark.

“You’re certainly not the prettiest girl here, but I will turn out the light.” Incidentally, negging (making women feel bad as part of flirting) and pick-up artistry was as big among young French losers as it was among their American counterparts for a little while, although some would say that’s not really very different from the standard behavior expected in the traditional French dating scene.

For the hopeless romantic of few words, here’s your line: “Hey miss, do you have a 06?”
This almost doesn’t even qualify as a pick-up line/joke, but I’ve included it here because it brings up a number of good points for the French learner:

This translates as “There is so much sun in your eyes that I get a tan when you look at me.”

Tellement is a very useful word for indicating that there’s “so much/many” of something, or an impressive amount. For example, c’est tellement grave (it’s extremely/quite serious) or il y a tellement de gens (there are so many people).

This is one of the sweeter lines to make this list: “I would like to be a drop of blood so as to better know your heart.”

The word cœur has both the same literal and figurative (romantic) meanings as the English “heart,” and a few more uses besides. It can for example be used as a term of endearment in the phrase mon cœur (literally, “my heart,” meaning something like “darling”). In another figurative sense, the cœur of a building or a town is its center.

This gag goes, “Is your name Google? Because I find in you everything that I’m looking for.”

Google as a verb hasn’t really caught on in France (though you can certainly google dictionaries claiming that googliser exists). It’s more common to just say chercher or chercher sur Google.

This line invokes the weather of Brittany: “I’m going to get you in the Breton weather mode: humid throughout the area.” No, Breton weather isn’t normally thought of as romantic, but this line manages to twist its famously rainy and dreary climate into something at least resembling a turn-on.

Feel like you’ve got a good handle on France’s jokey pick-up lines? You can test your ability to understand French expressions of irony and sexual frustration by running an internet search for the words phrases de drague (pick-up lines); many compilations will come up.

If you want to find further examples of pick-up lines in use or learn more about the social cues around when and how to use them, you can look for native content that showcases these.

Romantic films or shows can give you an inside look or you can look for learning programs that use native videos to teach learners.

You can also search for romantic clips in an authentic program like FluentU. This immersive app and website teaches the language through authentic French videos, including clips from romantic movies and shows. For example, you can check out a clip where a couple gets a little ridiculous with its romantic phrasing. 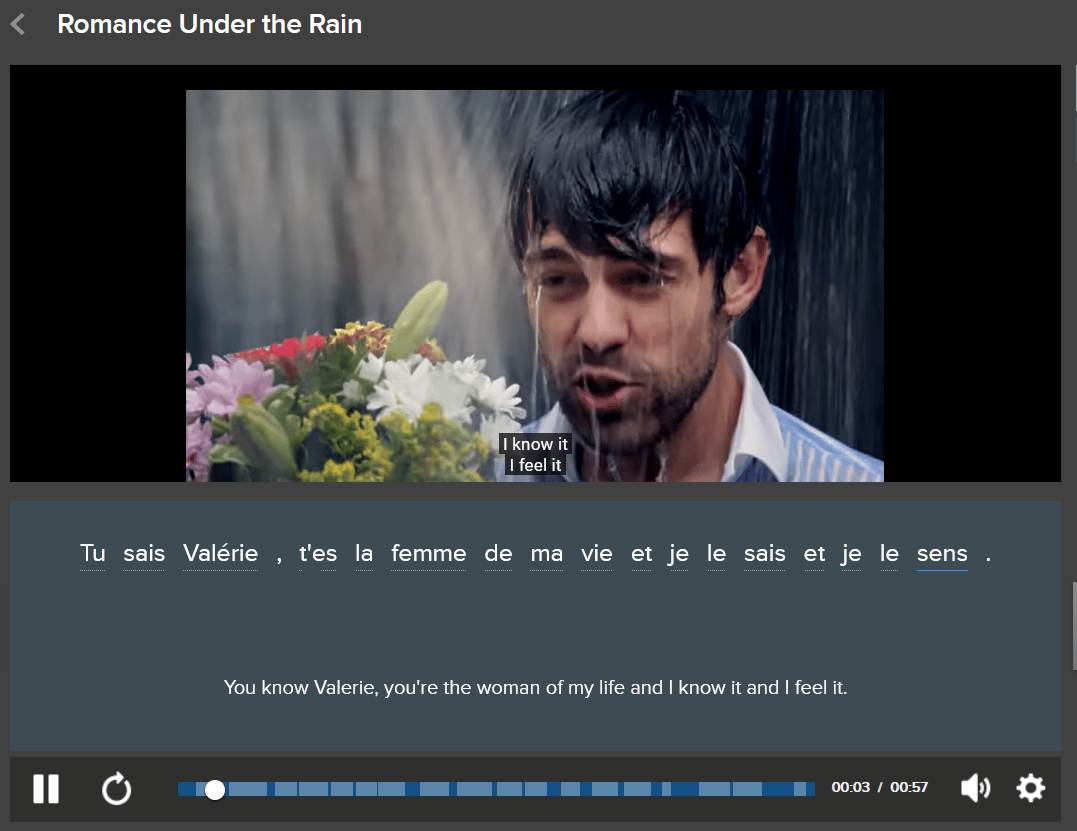 Turn off the English translations to boost your French skills even more. If you get lost, you can check any word’s definition by clicking on it in the subtitles.

In the same vein, if that’s your thing you might enjoy browsing French joke websites, or running a search for blagues (jokes). Popular categories on such sites include les Belges (Belgians), les belles-mères (mothers-in-law) and lois de Murphy (Murphy’s law).