What do you mean, no plurals?!

You may’ve heard that in Chinese, nouns are the same in both singular and plural forms.

You can’t just tack on an -s, like we do in English.

So how will you know how many eggs to put in your cake batter? Or make a restaurant reservation for a group? Or tell that clingy person you’re seeing that they’re actually not the only one?

Relax. Chinese isn’t as hard as you think.

It’s not that plurals don’t exist in Chinese. They just don’t manifest in a format you’d expect.

But that shouldn’t really surprise you, given how the language seems to defy numerous grammar rules that exist in English. Additionally, I’d imagine it’s much easier for English speakers to adjust to Chinese plurals than the other way around.

So, how exactly does one indicate if a noun or pronoun is in its singular or plural form?

No Plurals in Chinese?! 3 Easy Ways to Express Plurality

One of the more concrete ways to turn something from the singular to the plural would be identifying its specific number. So, saying “six cats” as opposed to “a cat.” Grammatical numbers must be followed by the appropriate measure word (more on that below), before saying or writing the noun.

Here’s the breakdown of that formula:

Before getting into the specifics of this plural form, let’s review our numbers.

You learned them as a beginner when you were taught how to count and how to tell time. You might even know some Chinese number slang. Whatever the case is, here’s a list of numbers to refresh your memory. We’ll skip ahead to bigger numbers, to show you how those work in case you haven’t come across them yet. If you need a more thorough rundown, here’s a list of Chinese numbers one to 100.

Chances are that you won’t be using the bigger numbers for Chinese plurals, but a little more information never hurt anyone.

One thing you need to note is when you’re using “two” as a grammatical number rather than a counting number in Chinese. When you’re indicating two of something, you’re supposed to use 两 (liǎng) instead of 二 (èr).

Also known as “classifiers,” measure words are very specific to what’s being quantified.

You might already be familiar with the most well-known classifier: 个 (ge). It’s pretty much the English equivalent of “of,” as in, “I’ll have two of everything.” Here’s how it would look in a sentence:

As generic as 个 (ge) is, try not to rely on it so much. Rather than learning a variety of measure words, Chinese students often end up using 个 (ge) for everything. While in many instances 个 (ge) will work, it makes more sense to say “two cups of coffee” than “two of coffee.”

To get out of the habit of using 个 (ge) as your go-to measure word, below are some other classifiers you’ll need to pluralize your nouns. Please take note that this list isn’t complete. There are plenty more measure words used in Chinese, but these are the ones you’d probably use more on a regular basis.

只 (zhī) — unit for animals and one of a pair of hands, feet, ears, eyes

Some nouns are addressed as multiples, like a pair of socks, a pack of cigarettes, etc. In cases like these, we would use special measure words. Here are some of those, along with their definitions and examples:

双 (shuāng) — pair, for items that always come in pairs

You might be confused with some of these measure words, since some don’t indicate specific amounts, like a pack or group. Although they’re nonspecific in terms of the total number, these special classifiers can still be “modified” by a grammatical number (e.g. one group of students, five groups of students, etc.). It’s important that you understand this now before moving on to the ambiguous plurals.

If this all seems a bit overwhelming, FluentU is a practical but fun tool to start learning these measure words in context. 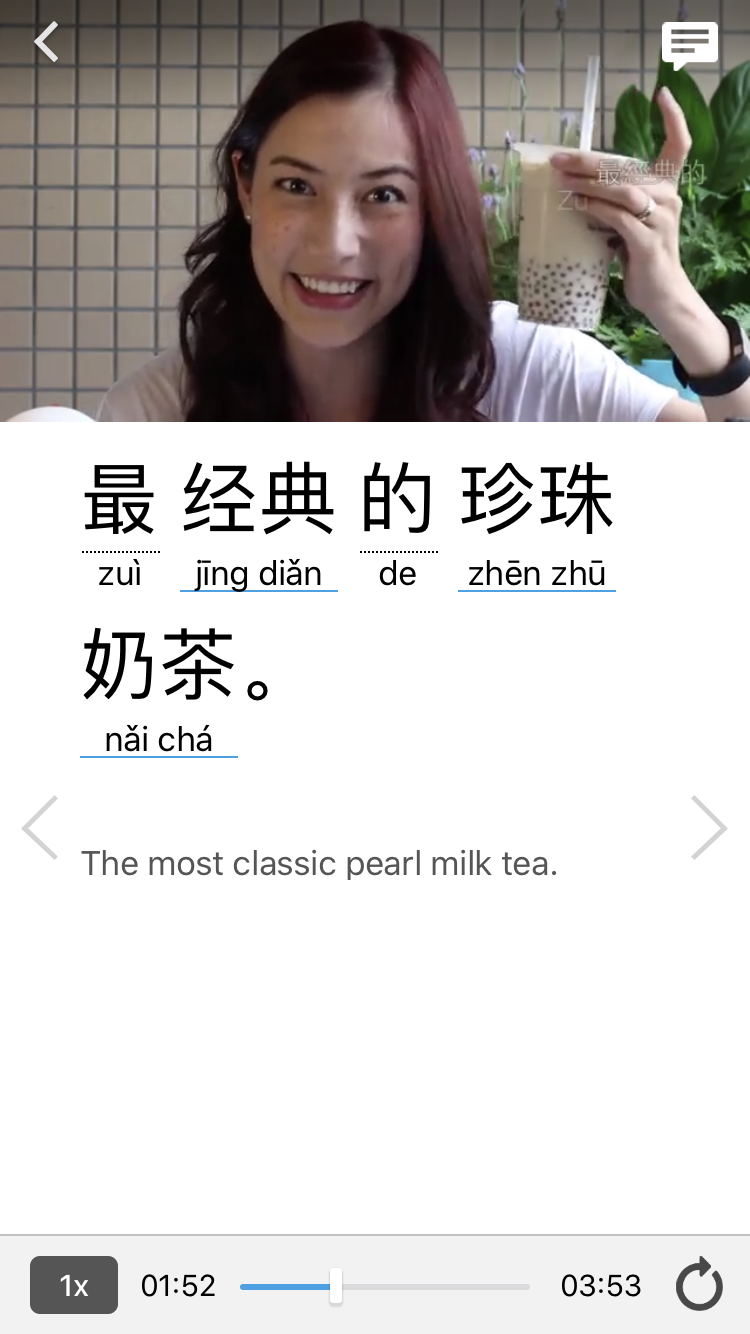 The best part is that FluentU always keeps track of your learning. It customizes quizzes to focus on areas that need attention and reminds you when it’s time to review what you’ve learned. In other words, you get a 100% personalized experience.

Now that you know that “groups” and “packs” don’t count as ambiguous plurals, what does? An ambiguous plural is anything that cannot be modified by a grammatical number, like “some” or “many.” Thus, the formula goes:

Let’s take a look at those ambiguous plurals and their usages:

Despite there being a number in 一些 (yī xiē), meaning “a few,” it doesn’t function as a grammatical number. Besides, no one would ever say, “two fews.”

This measure word literally means “not a few.”

When it comes to nouns and pronouns specifically pertaining to people, you can simply attach 们 (men) to them, so they would look like this:

In turn, adding 们 (men) “conjugates” the verb when used in a sentence. And I use quotations because the verb itself doesn’t actually change in Chinese—it’s just the meaning that’s altered to the verb’s plural version. Ah, the nuances of the Chinese language.

You can also add 们 (men) to nouns like “teacher,” “student,” “police officer,” etc. However, when a noun is the object of a sentence, 们 (men) isn’t completely necessary to make it plural. Some think it sounds strange to add it, so it’s normally omitted in everyday speech. It’s a personal preference, really, as the rest of the sentence usually provides enough contextual evidence to indicate a plural noun.

Check out these two sentences:

Because of context, 们 (men) doesn’t do much to contribute to the overall meaning, so why include it if you don’t really need it?

When there’s a grammatical number:

Like the ambiguous plurals in the previous section, 们 (men) doesn’t precisely define how many of the associated noun or pronoun are involved. If the sentence specifies the number, adding to the human noun or pronoun would be redundant.

When the noun or pronoun is non-human:

As previously stated, 们 (men) is only applicable to human nouns and pronouns. The only time you would see 们 (men) used with animals is when they’re being personified in stories.

There’s a bit of debate about using 们 (men) with 您 (nín), the polite way of addressing “you.” If you think about it, there’s not really a formal way of saying “you all” or “you guys,” is there?

Instead, native Chinese speakers use 各位 (gè wèi) for “everybody” and 女士们先生们 (nǚ shì men xiān shēng men) for “ladies and gentlemen,” so you can use those as the plural for 您 (nín).

大家 (dà jiā) wouldn’t be considered a plural for 您 (nín) since it’s an informal way of addressing “everyone.”

各位 (gè wèi) and 女士们先生们 (nǚ shì men xiān shēng men) are saved for formal settings and tend to address large groups of people. You’d normally hear them as a greeting during opening remarks at an event or in a speech, or read them in an email.

Note that 各位 (gè wèi) needs to be followed by a human noun.

The reason behind this one is unknown, but it might have to do with the fact that 谁 (shéi) means “who,” which refers to an individual rather than a group. Though, that’s just my guess.

这 (zhè) and 那 (nà) mean “this” and “that” respectively, and because there’s no uncertainty in the amount, both are followed by a measure word and a noun.

But the plural is where it gets a little weird. To say “these” and “those,” you’d say 这些 (zhè xiē) and 那些 (nà xiē) and then the noun, with no measure word in between. “These” and “those” are actually “this” or “that” combined with 一些 (yī xiē), which you may recall means “a few.”

So what we’re really seeing are the shortened versions of 这一些 (zhè yī xiē) and 那一些 (nà yī xiē), with the rough translation being “a few of this” and “a few of that.” It makes sense that an ambiguous plural would be needed to describe a vague quantity.

It took a while to get through the grammatical constructions of plurals, but we made it! It helps to go in-depth with these little rules. And knowing which measure word goes with which noun totally shows how much of a language pro you are, compared to your peers who are still is using 个 (ge) for everything.