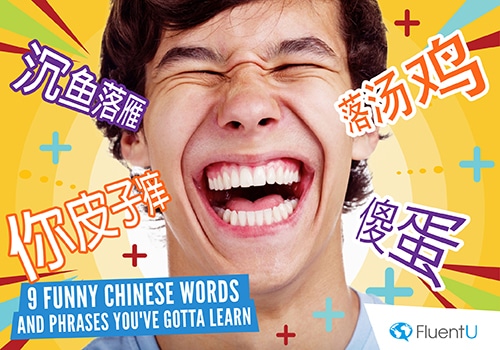 Do Yourself a Favor and Learn These 9 Funny Chinese Phrases

Comedy means a lot to people.

The average adult laughs at least four times a day at something.

And that something usually involves communication and, ultimately, language.

But what’s funny in English may not be quite as funny in Mandarin Chinese and vice versa.

This is why it’s important, as a learner, to try and learn a bit more about Chinese slang and idioms.

What human beings find funny or catchy isn’t all that different across the globe, but it doesn’t hurt to put some effort into learning specifics that relate to Chinese language and culture.

You are already taking the time to learn the language, after all, and culture is a big part of language.

It’ll help you learn new vocabulary, and it’s nearly vital to being able to communicate effectively with native Mandarin speakers.

The idioms and slang terms below range from painfully cheesy to actually pretty funny. It’s worth mentioning that not all of them are necessarily in current, common use, but they’re all great for practice and giggles. Check out our awesome list!

Oh, and if you’re loving all of these funny lessons, we also recommend checking out FluentU.

With FluentU, you can take your understanding of idiomatic and authentic Chinese speech even further. Start using FluentU on the website with your computer or tablet or, better yet, download the FluentU app from the iTunes or the Google Play store.

We’ve all heard the phrase “drop dead gorgeous.” This term is typically used to describe incredibly beautiful women, though it can also be used to describe particularly handsome men. It’s an odd term (with odd, vague origins) when you think about it: Describing people as so beautiful that they literally are murdering people with their looks is a strange compliment to give.

However, it’s not quite as strange as the Mandarin version: 沉鱼落雁, which means “sink fish, drop goose” or “beautiful enough to sink the fish and make geese fall from the sky.” This idiom originates from the ancient Taoist author 莊子 (Zhuāng Zǐ), who, interestingly enough, has written a lot of stuff about fish.

Of course, most young Chinese people don’t throw this term from a centuries-dead poet around in real life, but it’s still bizarre enough that you just have to know it.

You want to do what to my horse?! “Kiss-ass,” “suck-up” or “brown noser” are common terms used in the West to refer to someone who treats someone of authority with more kindness or generosity in order to fall into their good graces. Alternatively, the Chinese refer to the kiss-ass as one who 拍马屁, or beats a horse’s butt.

This common term is still often used. Out of context (and within context as well), it’s nothing short of hilarious.

If you bump into a tough character on the street or insult somebody, they might say 你皮子痒, or “your skin looks itchy.” This expression is used when expressing a desire to beat someone up.

What a damper. 落汤鸡, meaning “drop soup chicken,” or “a chicken who falls into soup” is used to describe somebody who trips and falls into water or gets caught in the rain.

有钱就是任性! or “Got cash, can do what I want!” is an expression used by wealthy Chinese people, or the average joe who just got their paycheck and begins to behave recklessly or act immature.

This expression comes from a real event that became a meme a couple years ago in which a rich man was being scammed by a pharmaceutical company. The man kept going with the charade long after he discovered it was a scam, just because he wanted to see how far they’d go; he was so incredibly rich that it didn’t matter.

A very common and lowkey hilarious insult in Mandarin is 傻蛋 or “stupid egg.” Depending on the situation, this can either be a playful insult when a friend does something dumb or straight up fightin’ words if said to a stranger.

二百五, or “250,” is a popular Mandarin Chinese slang insult with a pretty hefty history behind it.

The meaning behind the simple insult is an old tale about a king. The king’s dear friend was assassinated in the night and he wished to find who the killer was. The king posted a widely-publicized request to hire an assassin to kill the (already dead) friend in question. Soon after, four men showed up to claim 250 coins each. Naturally, the men had outed themselves as the ones who already killed the king’s friend and they themselves were given the cash and then killed.

“250” refers to someone who does something dumb or ill-advised.

“Sharp-tongued woman,” “busybody” or “buttinsky” are Western terms for a woman who enjoys gossiping about others’ business and personal lives. In Mandarin, such a woman would be 长舌妇, or “long tongue woman.” Sounds more like a creepy monster from China’s cousins to the east, Japan.

How can one simple word have so many different obscure meanings? Duang! can translate as something like “ta-da!” and is a Mandarin internet slang word with no official 汉字 (hànzì) or Chinese character to identify it. The term can refer to a positive exclamation, something that’s boring or the sound one makes when tripping and falling.

This word is all over the place in China, but the origins are a bit obscure. Many people believe that it comes from a shampoo commercial that Jackie Chan did a while back in which he uses the expression to express how awesome the hair care product is. After the commercial aired, the neologism became a viral sensation and a staple in Chinese internet slang. Be aware that this one might not be considered exactly “funny” in actual use—it’s more of an interjection, but admit it, you’re already laughing.

And there they are!

Just using a few of these nine phrases will definitely help you practice your Mandarin and connect with native Chinese speakers, especially if you’re trying to make language learning pals on the internet.