Japanese Lessons from the Crypt: 13 Scary Stories That Teach Language and Culture

If you met Japan’s Slit-Mouthed Woman in a dark Tokyo alley, would you know what to do?

This ghost gives you no choice: Learn the correct Japanese answer to her odd question or die.

Japanese mythology is full of things that’ll give you the creeps.

Did you get a chill seeing waterlogged Samara crawl through televisions in “The Ring”? Or hearing that freaky cat-boy meow in “The Grudge”?

Thanks to some popular movies, Japan is world-renowned for its seriously creepy ghosts and monsters.

Fun fact: Ghost stories are apropos of October in the West, but in Japan ghost stories tend to be told in the summer.

Even so, in the spirit of Halloween, let’s take a look at some scary ghost stories from Japan and see if they make you slam your laptop closed and run away in fear.

The Spiritual Beliefs at the Heart of Scary Japanese Stories

Japanese stories featuring ghosts are firmly rooted in the belief in the spirit world. Ghosts arise when someone dies and their spirit cannot move on to the afterlife, either because the funeral rites weren’t completed or because the person died violently or with unfinished business.

A successful spirit is believed to join its ancestors in the afterlife to watch over their remaining living family. Spirits are believed to return once a year to the world of the living, which is when the living honor their ancestors and give thanks to those that are watching over them. This holiday, called お盆 (おぼん) is celebrated in August.

Beyond the traditionally celebrated holiday, Japanese scary stories center on the spirits and ghosts left behind that are malevolent, mischievous or, on rare occasions, will give you good fortune. Of course, over time, folklore has ensured that certain ghost stories survived through the ages.

Enter the World of Japanese Ghosts

There are several terms that the Japanese use for ghosts, much the same way that in the West we can describe ghosts as specters, demons and shadows. These are the commonly used terms in Japan for ghosts:

Before going any further, let’s discuss how to protect oneself from any malevolent spirits that you might encounter. How to fight Ghosts:

Ghost Stories (お化けの話/おばけの はなし) or Kaidan (怪談/かいだん) are terms used to categorize classic and traditional ghost stories, usually from the Edo Period. Or, there is also 実話怪談 (じつわ かいだん) or “real ghost stories,” which are usually personal stories, but many have gained popularity and are retold. 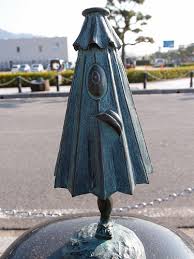 The most well-known ghost of an inanimate object, the umbrella ghost usually is depicted with one eye and jumping around on one leg in a geta sandal.

The general story behind object ghosts is that when human tools become older and older, they can become ghosts.

There isn’t necessarily a particular story about the 唐傘お化け, but it can be commonly seen in depictions of haunted houses and is usually used as a representative character for ghosts in Japan. 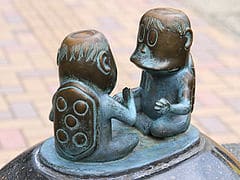 Literally “river boy,” these creatures resemble turtles with webbed (and somewhat human-like) feet and hands. They’re about the size of small children, and they’re able to stand, walk on land and swim.

The key characteristic of their appearance, however, is a small bowl or plate-like area on their head that must be kept wet or filled with water.

They inhabit water, usually staying in ponds or rivers. If the plate-like area dries out, the 河童 is said to lose its powers or even die. Some stories tell of how the plate can be covered to protect the 河童 from drying out, which allows them to travel farther away from their watery domain.

Primarily, the 河童 is used as a cautionary tale to children to be careful while swimming. 河童 are tricksters that, depending on the story, are mischievous or downright malevolent. The more sinister stories have 河童 luring people or animals, usually horses, into deep water so that all the 河童 can drag them down and drown them.

A strange off-shoot of the 河童 stories is that these creatures love cucumbers. Perhaps they’re the real inventors of the 河童巻き (かっぱ まき) sushi. 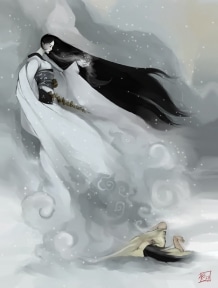 The “snow woman” is a spirit that died in the snow, and now only appears in the snow—here we’ll take a quick break from the summer ghost stories, and learn one that has a winter setting.

Like the snow, this woman has pale white skin, is usually dressed in white, and traditionally has long black hair. She is very beautiful, and floats along the snow leaving no trace behind to show that she has passed.

Don’t let her beauty fool you though—she’s a ruthless killer.

In the stories, she usually appears to travelers and traps them in snowstorms, breathing on them until they’re frosted dead, or simply leading them out farther and farther so they die from hypothermia.

In tamer stories, 雪女 will sometimes let victims go if they’re beautiful or young. Do you think you’re good-looking enough to survive? 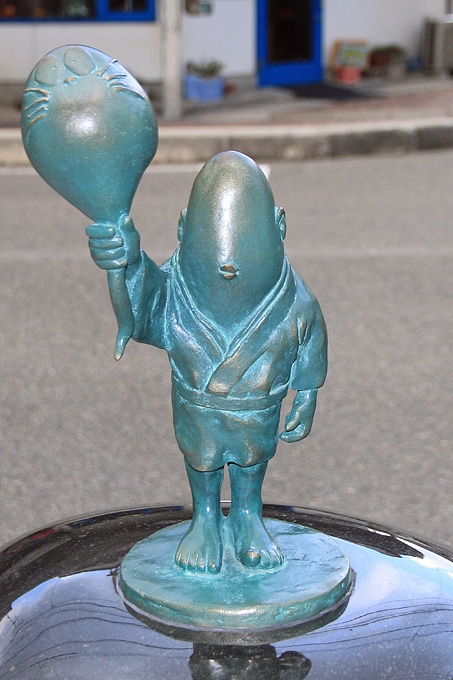 This is a creature that usually assumes normal human form, but is able to wipe its facial features off so a blank stretch of skin is left where the eyes, nose and mouth should be.

These creatures do not harm anyone in the stories, but simply scare people. There’s no telling if it could scare you to death, so watch out!

Studio Ghibli’s “Pom Poko” includes a scene with a のっぺら坊, which in the story is actually a shapeshifting raccoon parading as a のっぺら坊. 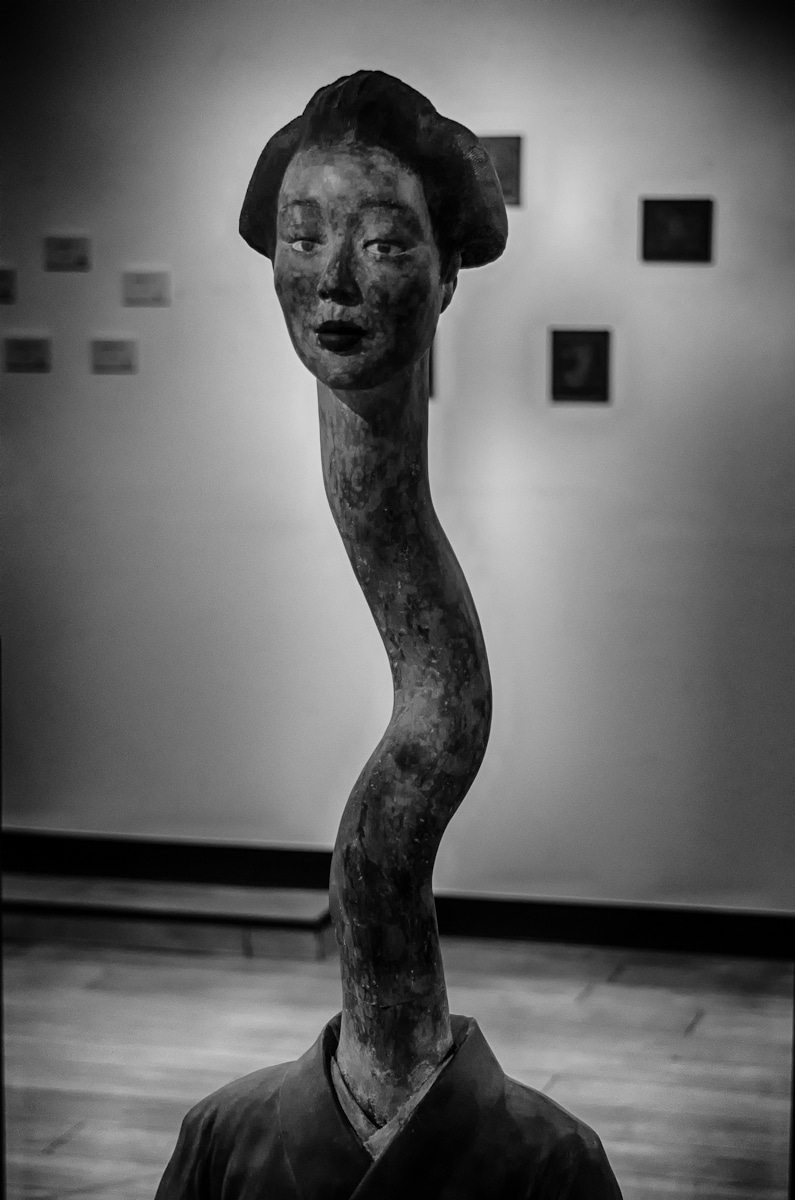 The “ろくろ” part of the name has unknown origin, but “首” refers to the neck, which is how this ghost is typically identified. They can appear as regular humans, but can stretch their necks to abnormal lengths.

There’s also another type of ろくろっ首 whose head can detach from the neck and fly around freely. This one is called 抜け首 (ぬけくび) or “Escape Neck” and references the head which escapes the neck (and body).

Typically illustrated as female, there are some instances of stories of male ろくろっ首. 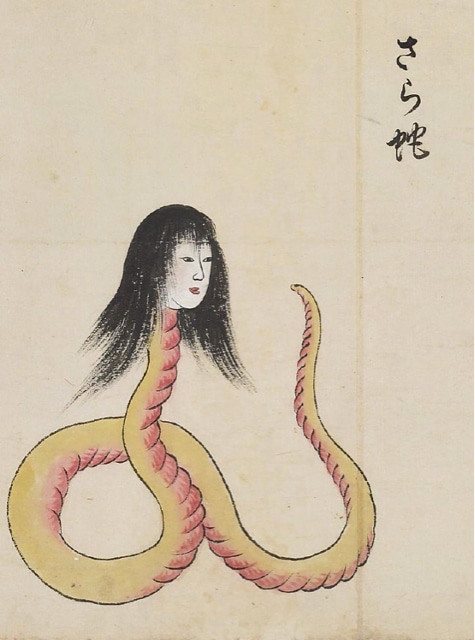 A relative of ろくろっ首, 濡女 literally means “wet woman” and has the head of a woman and the body of a snake.

An image of 濡女 is shown in “The Illustrated Volume of a Hundred Demons” (百怪図鑑/ひゃっかい ずかん), which is from the Edo Period, and show ghosts, spirits and monsters based on folklore.

濡女’s purpose isn’t quite clear, and stories about her involve her luring people into water by pretending to drown and then killing them. Other stories categorize 濡女 as tame creatures that are simply trying to wash their hair. In those stories she only reacts violently when people bother her during her hair-washing ritual. 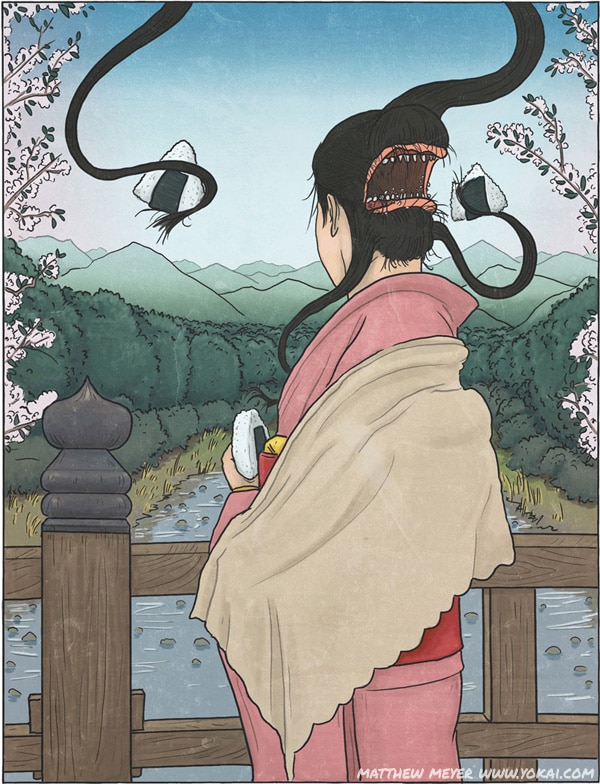 Literally, “two-mouth woman” describes this 妖怪 perfectly. This woman has a normal mouth, which doesn’t eat much or at all. But on the back of her skull, under her hair, she has a second mouth. This second mouth can control the woman’s hair to form tendrils that will reach out and grab food to feed itself, and it’s completely ravenous.

Stories of how this second mouth came to be differ, but they tend to include a miserly husband which made the second mouth appear—so penny-pinchers beware!

Other stories credit the second mouth to the woman’s own miserly ways. In those stories, the woman keeps food from her stepchild, who dies and becomes the attached second mouth in order to torment and exact revenge on the terrible stepmother who wouldn’t feed him. 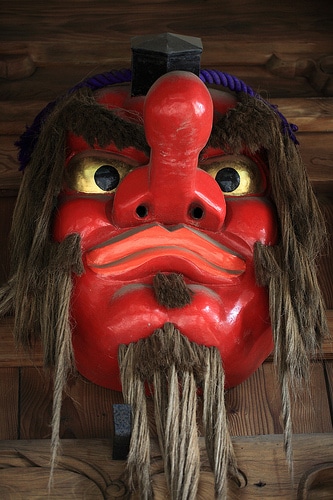 Literally “heaven dog,” these have an origin story that began in China, where the creature resembled a dog. When or how the 天狗 began to have features of birds and humans is unknown. So the image of this creature has changed over time and between countries.

Originally considered to be disruptive and warring demons, their story has changed a lot. Now they’re considered to be protectors of mountains and forests. They’re still very sly and can be dangerous.

There are many different stories featuring 天狗 and its levels of ghostly rage, so I wouldn’t do anything to tick it off if I were you. 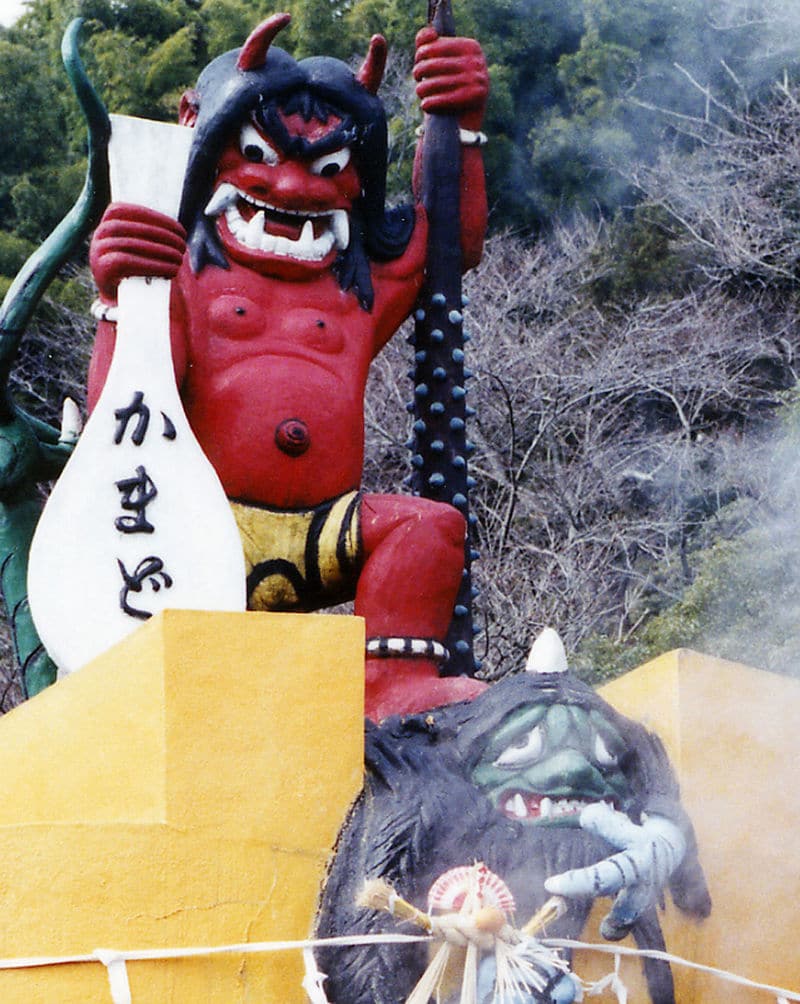 These ghosts are closer to demons, devils or ogres in appearance and behavior, rather than Western ghosts. However, these guys really do run the gambit of paranormal beings. The physical descriptions vary, but generally they’re ugly, large and have claws and horns.

Their skin is often depicted as being either red or blue. They wear loincloths and carry a 金棒 (かなぼう), similar to a club or stick. 鬼 appear in the Japanese children’s story “Peach Boy” (桃太郎/ももたろう), and “The Red Ogre Who Cried” (泣いた赤鬼/ないた あかおに) which is a story about kind-hearted red and blue ogres.

Slit-mouthed Woman, as the name implies, is a woman whose mouth has been slit. The slit extends up to both ears and is a terrifying gash across her face.

The story goes that her husband mutilated her with scissors. The legend has evolved to include a cautionary tale of what will happen if you meet 口裂け女: She’ll ask you whether you think she’s pretty, and your life depends upon your answer.

If you answer no, she’ll kill you with scissors.

If you answer yes, she’ll reveal her slit mouth (she’ll take off the face mask she’s wearing) and ask whether you still think she’s pretty. Your answer here will be a “damned if you do, damned if you don’t” situation.

If you answer yes, she’ll give you the same slit as her own so “both of you are pretty.”

If you answer no, she’ll kill you.

Another layer to the legend is a way to escape: Answer ambiguously or ask a question back, which will confuse her and give you time to escape. Hmm…a way to outwit ghosts besides お札!? 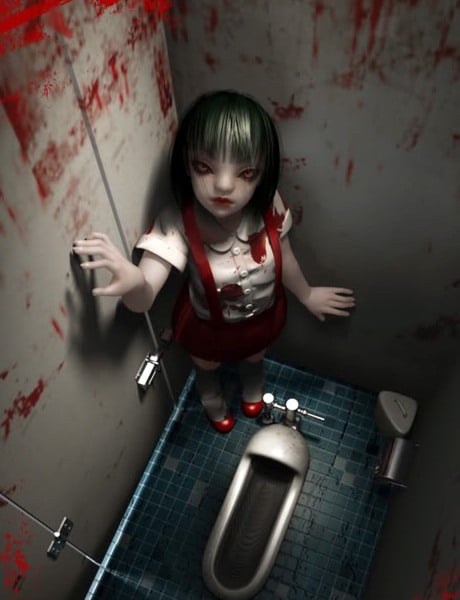 花子さん references a female spirit that haunts school bathrooms. The legend is that she’ll appear if you say her name in the third stall in the bathroom on the third floor.

This legend has been whispered around many a Japanese elementary school, similar to the way in which children in the West whisper about seeing Bloody Mary in a mirror. Perhaps 花子さん is a distant relative of Moaning Myrtle from the “Harry Potter” series? 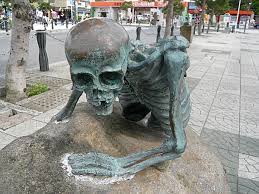 Huge skeletons much larger than normal size, allegedly the bones of people who died of starvation. One makes a quick appearance in a festival scene from Studio Ghibli’s “Pom Poko.“

Really though, there’s no need to supersize skeletons—they’re creepy as is!

A vampire tree that appears in former battlefields and survives on human blood from people it grabs who are unfortunate enough to wander by. The tree doesn’t appear different from other trees, but if chopped down, bleeds blood instead of sap.

How you chop a vampiric tree down without being grabbed and becoming its next victim seems like a good question!

Now that you know about some popular and classic Japanese ghost stories, you should be prepared if a Japanese ghost attacks or wanders along your path.

There are many books, manga and movies that these ghosts are featured in (some instances are mentioned above) so be sure to look up some specific stories that feature these 妖怪.

Images and videos of them can be pretty terrifying too, so if you want to explore the dark side, go ahead and Google all these guys.