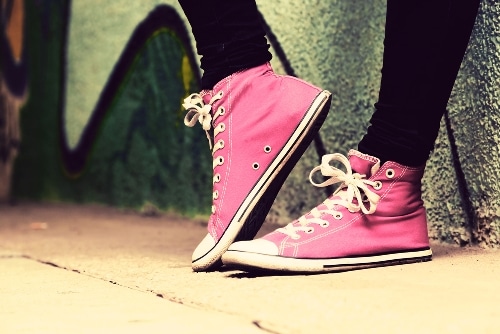 If someone told you to “belt up,” would you know what they meant?

Or what if they called what you were doing “cheeky”?

Even if these phrases are in English, if you’re from the United States you may be slightly confused. That’s because these slang words are traditionally from the United Kingdom, so it might take you a few tries to understand what the other person is saying.

Slang can be tricky to learn because of the informality of it, and it’s usually passed through speech instead of writing. It also will usually be restricted to a group of people, sometimes making it difficult to learn.

However, it’s completely necessary if you want to communicate with native speakers.

And even if it can be tricky at times, learning slang is fun and rewarding—since you can actually see yourself getting closer to fluency and real-world language, and away from textbook Chinese.

Not to mention that the Internet and phone texting has given itself to a new form of slang, which’ll keep Chinese learners of all levels entertained!

So to help you get you started, we’ve put together 15 Mandarin slang words for beginners.

When learning any language, it’s important to go beyond the textbook words and understand what’s going on in reality with the locals. Learning Mandarin slang will greatly improve your day-to-day communication in China. From texting your Chinese friends to talk about the girl or guy you met last night to understanding that someone is not literally talking about every cat and dog, learning the basics of Mandarin slang can save you plenty of embarrassment.

To have a clear grasp of popular culture which is constantly changing, it’s important to keep up with Mandarin slang and what people are using in conversations. Just as speaking colloquial Chinese is different from the formal way you may be taught in a classroom, writing Chinese online or through phone texting will also vary from what you will be studying.

If you are a beginning Chinese learner, slang is not beyond you! You might already have the beginning vocabulary to understand what’s being said, but will need guidance to understand the meanings. Each slang word below comes with helpful explanations, so you might even catch on faster than you expected.

In the past, much of Mandarin slang was developed through ancient stories that were passed down through generations. However, with the rise of the Internet and texting, a new development of language is forming.

One of the key elements of Mandarin Chinese is the tonal aspect of it. From the very start, learners are taught to master the four tones. Mispronouncing a word could have drastic effects on the meaning. Interestingly enough, the new generation has now used this to their advantage. For example, the pronunciation of 520 (wǔ’èr líng) is close to 我爱你 (wǒ ài nǐ – I love you). Over the recent years, 520 is now used to mean “I love you,” since the pronunciation is so similar.

Mixed in with English meanings, Chinese characters start to take on new meanings. This can be seen with the phrase 玻璃 (bō lí – glass). It’s now a way to reference a gay lover. This came about because in the beginning “boy love” was abbreviated as “BL.” When “BL” is entered into a phone or keyboard for the pinyin text, 玻璃 is what first shows up, turning it into a slang phrase among the younger Chinese generation.

Below are 15 Mandarin slang words that beginners can take advantage of. They’ll range from words that have ancient stories behind them to recently developed phrases you may want to save for texting or internet use.

If you want to learn even more awesome Chinese slang, check out FluentU.

94 is an example of a phrase that has become popular due to the Internet and online chatting. It means “precisely,” “exactly” or something along the lines of “I know.” It comes from the similar existing Chinese phrase: 就是 (Jiùshì).

This is another phrase that has been invented and gained popularity due to the Internet. Just as GG stands for “boy” or “brother” because of 哥哥 (Gēgē – older brother), MM is short for 妹妹 (Mèimei – younger sister). In the Internet world, MM can simply mean “girl” as well as “sister.”

It also can stand for “美美 (měi měi – pretty). When MM is used, it usually has the connotation of a young or pretty girl, so do be careful when you choose to use it.

PMP comes from the phrase 拍马屁 (pāi mǎ pì), which directly translates to “patting the horse’s backside” and is equivalent to the English version of a bootlicker or a suck-up. In essence, it refers to someone who may just be flattering you and may not be completely truthful about the situation.

The term for this means “idiot” or “moron,” and comes from an ancient Chinese story. In Ancient China, the square hole in copper coins was used to string them together. 1000 coins stringed together was a “diao.” Half of a diao, or 半吊子 (bàn diào zi) was used as slang to talk about someone who was inadequate.

As a way to describe themselves, modest Chinese scholars went a step further and took a half of the half, hence the 250, to show they were a real idiot.

This phrase is similar to the English expression of “any Tom, Dick or Harry,” meaning “anyone and everyone.” The origins come from the fact that in Ancient China, 阿猫 (ā māo) and 阿狗 (ā gǒu) were often used as nicknames for people.

This phrase means to “forget it.” It can be used in many situations, from meaning a casual “whatever” in everyday scenarios to a firm or more serious “Let it go.”

Depending on the situation, this phrase can range anywhere from meaning “Go away!” or “Off with you!” to something more offending like “$#@% off!”

Jokingly or in the right situation, it can be appropriate to use. However, you will want to be careful when you use this if you’re not trying to offend your new (or old) friends.

不咋的 (bù zǎ de) means “not great,” or similar to saying in English “not so hot.” It can be used to describe a situation or a person.

The meaning of this phrase is “Do what you want” or “Whatever.” It has a nonchalant attitude, similar to the English phrase “Who cares?” It stems from the local Beijing dialect and is most popular there.

才不呢 (cái bù ne) is an idiom similar to “no way” or “not at all.” It’s commonly used like the English phrase “Of course not!”

A: 她是你的女朋友吗? (tā shì nǐ de nǚ péng yǒu ma?)
A: Is she your girlfriend?

This phrase is an extreme way of saying someone is ugly. It translates more to “monster-looking.” Depending on the situation, it can sometimes be used in an affectionate way to show that something is so ugly.

The literal translation of this phrase is “flower heart,” but means something along the lines of “wandering eyes.” It’s usually used to describe men, but can also used for women as well.

When used in a phrase, it’s usually negative and will describe someone who has not been faithful in the relationship.

Most beginner learners will have learned this word early on to mean “dirt.” When used to describe a person or object, it can also mean “nerdy” or “unfashionable.”

The origins of this come from the fact that people who work with soil and dirt are usually peasants, and they’re not always seen to have all the class or elegance as a city person might. It’s similar to the English slang of “peasant.”

It’s not a compliment, so be careful when you decide to use this word!

The literal translation is “under the eyelids,” and means something along the lines of “under one’s nose.”

These 15 Mandarin slang phrases will help you get on your way to mastering both textbook and colloquial Chinese!

5 Surprisingly Simple Ways to Get In Your Chinese Reading Practice Online!
10 Famous Chinese Singers Who Will Be Your Favorite New Language Teachers