The scene: A swanky hotel gym in Madrid.

Later, you’ll be downing a gin tonic (they drop the “and” here!) at a trendy tapas bar on the Gran Vía, so sweating on the treadmill beforehand is a great option.

Suddenly, you realize the dark-haired hunk beside you is asking you a question. In Spanish.

And you draw a blank. Like, a total blank.

Is he trying to chat you up by talking about agujeros (holes) or agujetas (sore muscles)?

You have no idea.

Or what if you meet someone at the club?

The music is loud. The dancing is larger-than-life.

She’s smiling as she strikes up a conversation. In Spanish.

You stare at her, the smile falling off your face as you try to figure out whether she’s inquiring how many anos (anuses) or años (years) you have (or how old you are).

Again, a Spanish translator would’ve known which one she meant—anuses or years!

So, let’s get you set up with a super Spanish translator. That way, you’ll never miss a communication opportunity.

Translate anywhere—even at the gym or in the club!

Let’s learn more about how and why translators can help you. Then, we’ll look at the best translators you can download right now, and you’ll be able to choose the best one(s) for you.

Why Are Translators Useful for Spanish Learners?

Automatic translators, or translation apps, come in handy for travel, immersion learning or employment. Whether you’re browsing at the marketplace or psyching yourself up to head into a job interview, sometimes, no matter how hard you’re working to learn the language, you just need to know a word or phrase now.

Some additional factors to consider: 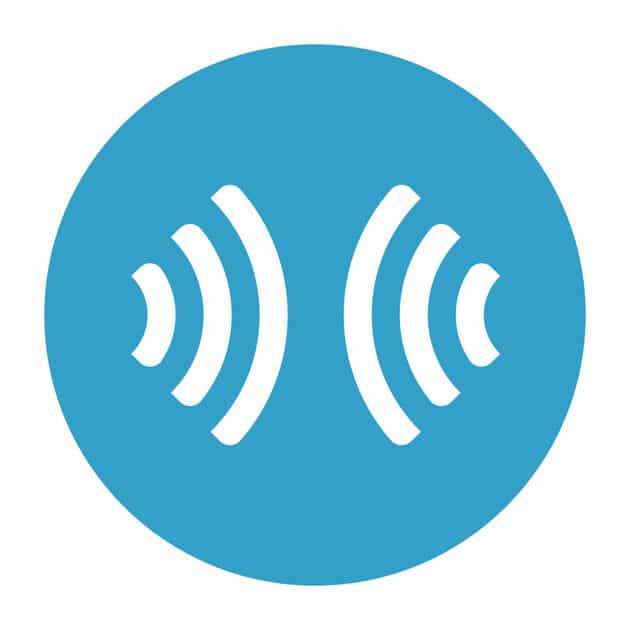 SayHi Translate is referred to as “an interpreter in your pocket,” and with dialect support for 18 Spanish-speaking locations, that seems to be a pretty accurate description.

It’s a free app with a sleek design so it’s easy to use. Navigation is completely uncomplicated—tap the menu button to access settings. You can change the voice from male to female (when the feature is available) and control translation speeds with minimum effort.

It does need internet access to do its job, so if you’re headed to a web-free zone this isn’t a good choice. Otherwise, it’s a super translation tool! 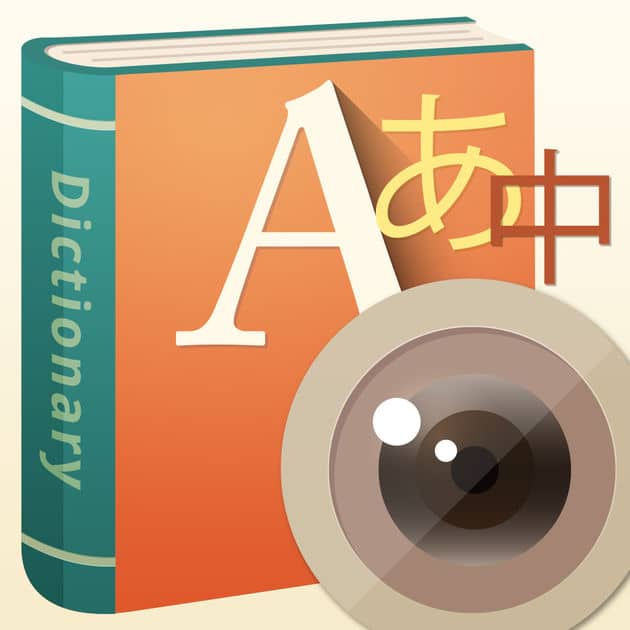 Worldictionary is an award-winning app designed to translate multiple languages, including Spanish. It provides instant translation and pronunciation for words, phrases and full sentences. It also saves your searches, which allows you to compile a customized vocabulary list.

The “view and translate” option makes this translation app an ideal choice not only for daily use but also for travelers. Just point your phone at an object to get an instant translation! Think about the street signs, subway maps, menus and all the random signs travelers encounter. Now, imagine that even those your Spanish skills don’t cover are instantly translated. Sounds amazing, right? That’s because it is amazing!

It’s possible to translate with several offline dictionaries, so if you’re not connected to the internet, you’re still set up for rapid translations. 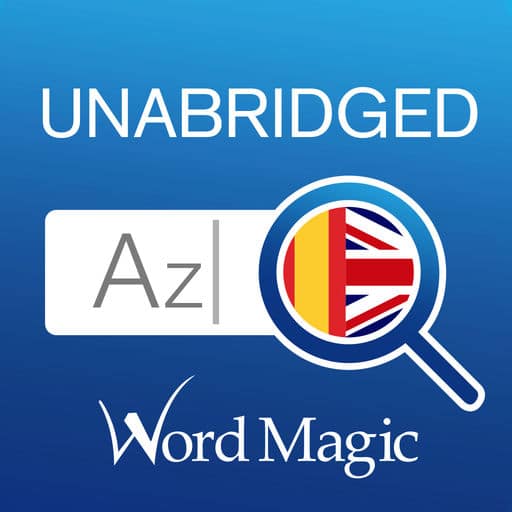 The English Spanish Dictionary by Word Magic software is pricier at $24.99. But it may be the largest unabridged English to Spanish and Spanish to English app available.

It also features specialized medical and legal terminology, so if you’re ever in a Spanish-speaking country and find yourself ill or in need of an attorney, this is a translator it would pay to have on hand.

The “fuzzy search” feature is a lifesaver if your Spanish spelling skills are shaky. It detects misspelled words in both Spanish and English so even when you misspell something, the app is able to offer a translation.

Something else to note about this app: Translation dictionaries and apps often only offer more minimal and straightforward translations. This one, however, includes many definitions. It’s a definite boost to comprehension to have a word or phrase fully defined as well as translated.

This is more than a translation tool—you can actually learn with it. There are flashcards and a random word display for users to work with. Take advantage of colloquial words being marked with flag icons to learn where they’re used. Check out the nouns classifications or familiarize yourself with the extensive lists of quotes to progress more in the language than you could using most translation apps.

This one is also great if you’re planning to be away from the internet, because it doesn’t need a connection to translate.

If you download this app, put it through its paces to ramp up your Spanish learning. You’ve paid for it, so use it to its best advantage! 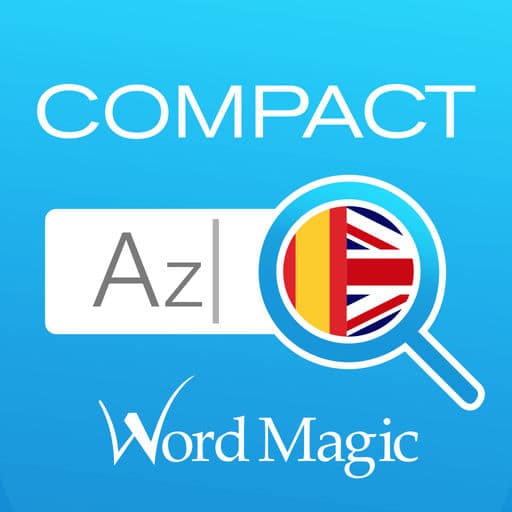 This app features pronunciations in regional voices, synonyms with translations and a scan function for quickly locating and defining concepts or idioms.

There’s also still a random word display, so it can be used for vocabulary building. And the option to save favorite words makes compiling vocabulary lists a simple task. 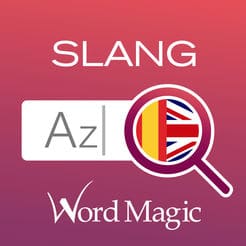 And if you’ve ever wanted to perfect your, uh, cussing abilities, this is the perfect tool for finding effective swear words—and learning how to use them.

Each definition’s country of origin is marked with a small flag icon, so it’s clear just where the word or phrase comes from. This feature makes it easy to assemble vocabulary lists for particular countries in preparation for traveling.

The option to pronounce searched words is automatic. There’s also a flashcard feature—probably an interesting way to learn slang vocabulary and kill some time all at once.

This is a super tool for travelers who want to sling Spanish around like a native while traveling. Wherever you’re planning to go, this slang translator has some local lingo to spice up your trip!

If you want to go even further with Spanish slang, you may also want to check out Gritty Spanish, an audio program that focuses on “grittier” Spanish vocabulary and ties it all together with dialogues so you can hear words and phrases being used in context. You can read our review of Gritty Spanish here. 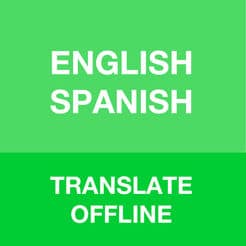 The Spanish Translator Offline delivers on its promise to work offline. It’s a free app, so even if you’re not planning to be without internet service it might be something to download for those just-in-case moments when you’re in a dead zone but really need to translate something important.

Pronunciation with human voices provides examples for users to model pronunciation. The app searches for sentences, phrases and related words quickly and efficiently.

It will even search and translate long sentences or phrases—all offline!

Language learning requires hard work. Even if you put in long hours with your Spanish study materials, you can’t know everything.

But Spanish translation apps? They’re the heavy-hitters for language learners. They know what we don’t—and are happy to provide that information.

And an added bonus? You’ll never miss an opportunity for a date again!