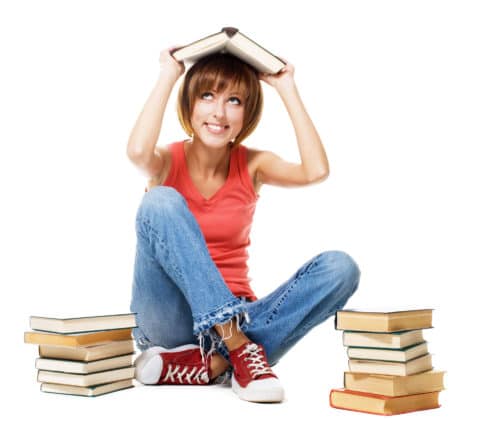 Do you often find yourself getting distracted during your German studies?

No surprises there. It’s a wonderful language, but the grammar can be a beast.

It can be even harder to concentrate on verb patterns and the like when you have internet access.

Don’t get us wrong, online learning is great and you should take advantage of it.

Even verb conjugation specifically can benefit from a wide variety of online resources for practice and apps for quick lookups and yet more practice.

But taking advantage of useful offline resources—namely, books—can help you cut down on distraction and concentrate on whatever grammar-based issue you need to focus on, all while giving you a more information-rich experience.

Books can be great as a supplement to whatever classroom material you may be assigned or whatever online materials you’re using.

Verb books can be especially useful for conquering the tricky action-based facet of German grammar, and maybe you’ve even figured this out and are just trying to see what the next step is.

So where to start? Books that teach language can sometimes be expensive or hard to get, so let’s take a look at how and where to find them.

Kicking It Old School: How to Find German Verb Books and Get Them Cheap(er)

Sure, we’re talking about offline resources, but online retailers like Amazon and Barnes and Noble are a good place to start looking for something hard-to-get.

If you’re not living in a particular country where a book is sold, you might be able to get Amazon Germany or Mayersche, a German chain, to ship it to you in your location. The only downside here is that if you live outside the EU, shipping can get expensive.

Check out your local bookstore. I’ve found that even if they don’t carry a specific book, you might be able to get them to order it and thereby save on shipping costs that you might have to pay if you use an online retailer.

If you’re in a German-speaking country, stores usually have an area for Sprachwissenschaft (linguistics) where you can find everything related to learning any language. Go to the Deutsch als Fremdsprache (German as a foreign language) section within the linguistics area and you’ll find everything there from Wörterbücher (dictionaries) to Verben (verbs) to Übungsbücher (exercise books).

Whether you use an online retailer or visit a local store that may have secondhand books, this is a smart way to save a lot of money. A language’s grammar doesn’t tend to change much over a short period of time, so buying an older version of a language book won’t affect your ability to learn. The only difference might be with idiomatic expressions that go out of style or specific vocabulary that’s missing (e.g., new words for technology).

Sometimes you’ll also be able to find new copies of older versions of books, and these are frequently marked down from the original price. In Germany, check for which Ausgabe (edition) you’re looking at; some local bookstores will actually even have a section specifically for marked-down books. This might require some time to rummage through everything, but on occasion, you can be handsomely rewarded.

On Amazon Germany, you can also easily buy used editions if they’re available; on the right-hand side, there’s a small option that says, “Gebraucht kaufen” (buy used) with a price. Alternatively, just google “gebrauchte Bücher kaufen” (buy used books), and you’ll find many different websites that you can use to find secondhand books.

Sometimes the e-reader version of a book is cheaper, but on occasion, you can also find online versions of books for free, like on Google Books. One thing to note, though, is that sometimes the book isn’t available in its entirety.

You can also check for books on VitalSource, an online retailer that allows you to rent as well as buy e-textbooks. They have a wide selection of texts on the German language, including a good number that cover various aspects of grammar, including verbs. Using them to cover all your e-textbook needs throughout your German language journey is a great idea as you can easily keep track of all your books on their handy reading app and probably save a lot of money in the process.

Go to your local library or university

Libraries are still a fantastic resource for finding books. If you’re in the United States, you can find your local library on this website, and for everyone else, you can check out WorldCat. With WorldCat, you can also order books to pick up at the library closest to you, even if the book is in another city. If you’re taking a book out from the local library (or university), you’ll probably have to get a membership. However, you can look at the book for free and, if need be, copy any pages that are important for a small fee, since there are usually copiers available.

If you’re in Germany, you can also google “Stadtbibliothek” or “Stadtbücherei” (both mean “city library”) and the city where you are to find your local library. Additionally, you can search for “Universitätsbibliothek” (university library) to see if there are any specific rules you should be aware of, though because many universities are public, it isn’t uncommon to see non-students making use of the resources.

Now that you know where to look, check out these six German verb books to master conjugations!

This is a verb book that can be used for any learning level, whether you’re a beginner encountering German verb conjugations for the first time or an advanced learner who needs to brush up for an official language test. It offers a comprehensive explanation of the various verb tenses and how and when to use them. Although it can be very technical and not necessarily for people who don’t want to get into the nitty-gritty of German grammar, there’s also a part displaying 555 verbs with their conjugations and exercises.

The reference section with the conjugations is presented in an organized way and is easy to use once you understand how it’s formatted. What’s particularly helpful are the examples at the end of each verb page with sentences, where the usage is put into context. For some of the most common verbs, there’s even an extra section with idiomatic expressions.

Similar to “The Big Yellow Book of German Verbs,” “501 German Verbs” offers readers a comprehensive look at some of the most common verbs, as well as instructions on how to use them and how to conjugate them. This book also thoroughly explains when and how to use each verb tense and gives examples. Compared to the previous book, the charts here are a little easier to use, though both are excellent resources.

Newer versions of “501 German Verbs” come with a CD-ROM, but as mentioned earlier, getting an older copy can be a great way of saving money. The book itself is thorough and good for learners of any level. It’s one of those resources that’s handy if you need to conjugate something quickly and don’t want to look it up online—you can just grab the book, open it and look the verb up.

The authors of this book believe that verbs are one of the most difficult things when learning a language. The book details every aspect of German verbs, going into how to use them and when with examples.

The first part of the book is actually quite a lot of reading, but the second half consists of verb tables with conjugations. Additionally, each verb also includes examples in sentences for context and how to use the verb correctly, as well as nouns that might include the verb (e.g., the verb is “anbieten,” or “to offer,” and one noun suggested is “das Angebot,” or “the offer.”)

Langenscheidt is a German publisher that specializes in language resources. The claim on this particular book is that it’s for learners in the A1 to B2 levels of the Common European Framework of Reference for Languages, which, put more simply, would be beginners and intermediate learners.

However, the book explains everything in German, as it’s part of the Deutsch als Fremdsprache (German as a foreign language) series. This means that the explanations for how to conjugate a verb, when to use it, what form to use, etc. are explained not in English, but in German. Of course, this isn’t for everyone but can be a nice challenge, and the theory behind it is that if you only use your target language and not your native one, you’ll end up learning more.

Although the book claims it’s for beginners and intermediate learners, advanced learners can also take a lot away from it just because the explanations are in German. Many of Langenscheidt’s Deutsch als Fremdsprache books are helpful in that they use fairly simple German to explain concepts, and this one is no exception.

This is a resource that might be easier for learners who are in Europe to get than for those elsewhere, though finding copies online is definitely possible. Duden is the German language’s definitive authority, much like Merriam-Webster in the United States or Oxford in the United Kingdom for English.

Similar to the previous book, this one also explains everything in German and is an excellent resource for advanced learners. This particular book doesn’t focus exclusively on verbs—only the first 200 or so pages deal with them. However, the verb section is ordered in a structured way that could make learning easier; there are sections such as “regular verbs,” “irregular verbs,” “modal verbs” and “helping verbs.” Within the “irregular verbs” section, there are also patterns that are shown, like how the verbs change with certain letters.

The rest of the book deals with all other parts of German grammar: nouns, adjectives, articles and pronouns. If you’re looking for a more comprehensive book that doesn’t just deal with verbs, this book is definitely one you should pick up.

PONS is another European publisher. Their book is also part of a Deutsch als Fremdsprache (German as a foreign language) series, which means everything is explained in simple German so learners can understand it.

Unlike many of the other books mentioned in this list, this book is focused on exercises rather than on explanations, conjugations and tables.

The explanations that are available are fairly short since the point is to actually practice conjugating and writing sentences. This is a great resource for beginners and intermediate learners.

Books are a great resource for learning German that offers no distractions, and a good verb book is an essential supplement to your regular German learning routine.

Although buying books can sometimes be expensive, there are alternatives, whether it’s buying a used copy or going to the local library.

Even with lots of new technologies and apps available, a verb book is a reliable, go-to resource that can always be part of a learning regimen.

On Your Mark, Get Set, Learn German with Lessons for Beginners!
Live the German Life and Study German in Germany!