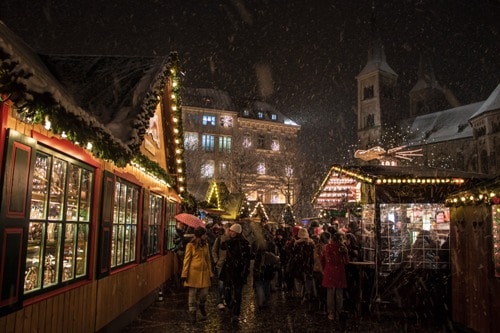 Pssst…got any plans for the holidays this year?

Hitting a Christmas market or two?

Heating up some lovely mulled wine?

If I just made you sad that you’re not in Germany, don’t be!

No matter where you are, you can use a smattering of the right vocabulary and a dash of cultural knowledge to bring the magic of German Christmas into your own holiday celebrations.

And doing so is guaranteed to make your festivities extra-special and fun.

After all, just because both Germany and English-speaking countries celebrate this holiday doesn’t mean we necessarily do it in the same way.

In much of the English-speaking world, the whole of December feels Christmassy due to the Advent period, but our first big day is Christmas Eve. This is the night when Santa visits, and it’s also when midnight mass and other church services take place. It’s a big day in our calendar, but it isn’t our main day. December 25th is when all our major celebrations happen…think presents and a huge Christmas dinner!

However, over in Germany they do things slightly differently.

Germany also has Advent and it lasts from December 1st right through to the 25th. However, while we have to wait the whole 24 days in between, Germany has an extra day of celebration on the 6th. December 6th is Saint Nicholas’ Day, and involves presents and celebrations.

On the evening of the 5th, children place shoes on their doorsteps. If they have been well-behaved throughout the year, then Saint Nicholas (or Sankt Nikolaus in German) will fill them with chocolate.

Saint Nicholas’ Day isn’t all fun and games though—if the kids have been naughty then they will be visited by Krampus, a horned devil-like creature who travels with Saint Nicholas to punish any misbehaving kids. In Austria and southern German towns, locals will take part in an event called a Krampuslauf or “Krampus Run.” Men from the town will dress up as Krampus and run throughout the local area, often fueled by a lot of alcohol.

One other big difference between Christmas in the English-speaking world and Germany is the date on which we receive our presents. Here we do it all on the 25th, but for Germans, December 24th—or Christmas Eve—is when families gather around to exchange gifts.

The morning of Christmas Eve is when many families decorate their Christmas tree. There is one big similarity between our countries on Christmas Eve, though—it is the day that most religious families will visit church together.

One extra aspect of Christmas in Germany is the importance of Christmas markets. The Christmas markets are on every day during Advent. Families frequently gather together at the markets and eat and drink all the treats on offer, including Glühwein (mulled wine) and gingerbread. On December 6th, a man dressed as Saint Nicholas will visit markets and give out gifts to children. He might even be joined by a fellow dressed as Krampus…

The following is a list of vocabulary that will prove useful during the Advent period and in the run up to Christmas.

German Advent calendars can also contain small chocolates. If you’re feeling creative, why not try making your own calendar?

If just the mention of cookies is making you hungry, you can find different recipes for Plätzchen here.

On the evening of the 5th, children leave out shoes in the hope that Saint Nicholas will fill them with chocolates.

A companion of Saint Nicholas who punishes naughty children. If a child has misbehaved throughout the year, Krampus will fill his shoes with coal.


Many families meet up at the Christmas markets to enjoy seasonal food and drink.

Try making your own Glühwein—not only will it taste great, but following the recipe will help your language skills!

There is usually a nativity scene on display at each Christmas market.

Germans send Christmas cards to each other in the run up to Christmas.

Here’s a list of vocabulary comprised of words that are closely associated with the main days of Christmas.

Families traditionally wait until the morning of Christmas Eve to decorate their trees.

In Germany, the traditional meat eaten for Christmas dinner is goose. Fancy cooking your own Christmas goose? Here’s a great traditional recipe.

You can find loads of recipes for it here.

It is said that Dresden’s Stollen is some of the best in the country.

schenken — to give (presents)

In the north of Germany, Santa Claus delivers presents during the night of December 23rd. He is known as der Weihnachtsmann.

In southern Germany and Austria, the Christ-child brings gifts on Christmas Eve instead of Santa Claus. This cherub-like child is often portrayed as being blond and with wings. The Americanized spelling and pronunciation of this is Kris Kringle, which is sometimes used as an alternative name for Santa Claus.

Need some ideas for what to give your friends and family this year? This website will give you plenty of inspiration, while helping you practice your German reading!

You can’t make your German learning much more festive than singing a couple of Christmas carols. Some of the most popular English Christmas songs actually originated in Germany and have since been translated. “O Christmas Tree” is actually a German carol called “O Tannenbaum.” “Silent Night” also began life as a German carol: “Stille Nacht.”

Ice skating is a popular winter pastime in Germany.

Just because Christmas is over, it doesn’t mean the party is…it’s time for New Year’s Eve!

The German name for New Year’s Eve comes from Pope Sylvester I, whose saint feast day is December 31st. Germans celebrate Silvester with lots of fireworks and champagne. Making noise is a key part of the evening as it was traditionally believed that this would keep evil spirits at bay—families will make loud noises with anything they can get their hands on, from drums to kitchen utensils.

Donuts filled with jam are often served at Silvester parties. But watch out! It’s not uncommon for pranksters to fill some with mustard as a practical joke…

Hopefully this blog post has gotten you ready for the holiday season!

If you’re still feeling a little Grinch-like, try including small festive exercises—like some of the ones mentioned above—in your German practice…

You’ll get into the Yuletide spirit soon enough!

What’s the key to learning German effectively, from Christmas vocabulary to day-to-day words?

You’re not going to pick it up from your textbook.

Well, that’s exactly what FluentU is for. FluentU takes great videos and turns them into language learning experiences so that you can learn real German as people really speak it:

You can tap on any word to look it up instantly. Every definition has examples that have been written to help you understand how the word is used. If you see an interesting word you don’t know, you can add it to a vocab list.

And FluentU isn’t just for watching videos. It’s a complete platform for learning. It’s designed to effectively teach you all the vocabulary from any video. Swipe left or right to see more examples of the word you’re on.

Start using FluentU on the website or practice anytime, anywhere with the iOS or Android apps.