What is more closely tied with the savoir vivre of the French than their food?

But it’s not all about baguettes and frog legs!  Here is a quick French regional food vocabulary lesson to have you ordering like a pro in restaurants from Paris to Cannes.

It’s always handy to learn food vocabulary, regardless if you can travel to France or not. Whether you’re dining at one of your local French eats or watching a food-centric French film, there’s always a good reason to learn about French culinary terms and expressions. 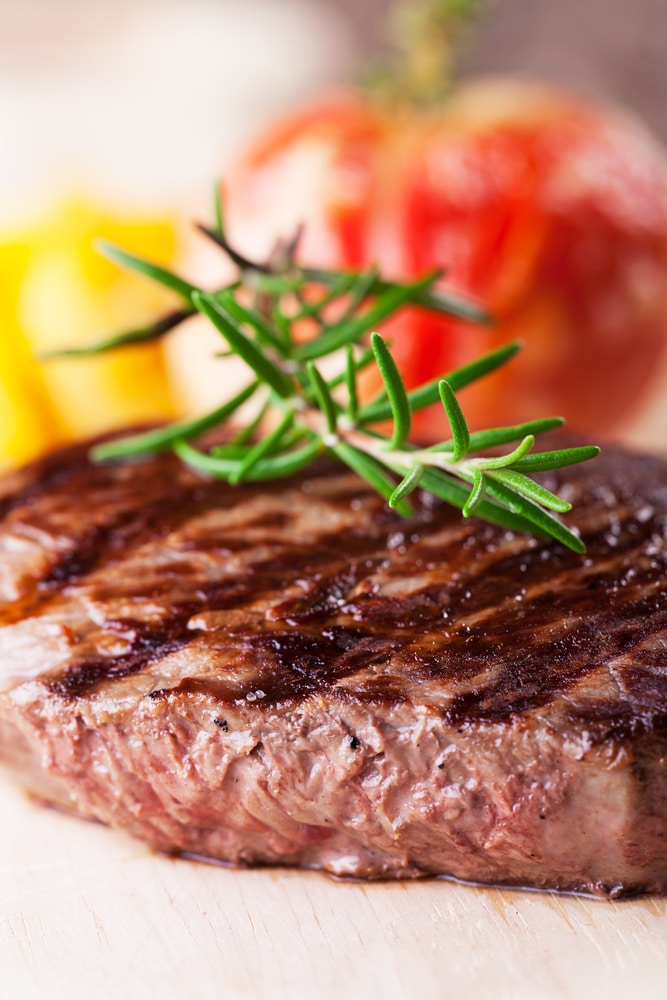 Bordeaux is known for its full-bodied red wines, and nothing is more perfect than a rare steak to match up to the flavor of a Bordeaux.  An entrecôte is a premium cut of meat, like a rib eye, while saignante means rare.  A delicious way of preparing entrecôte is to grill it on sarment, or branches of grape vines.

And for a dessert in Bordeaux, why not try a canelé?  Made in special pastry molds, a canelé is distinctive for its grooved, cylinder shape, custard inside, and caramelized crust.

Je voudrais une galette avec de la confiture.
I would like a galette with jam. 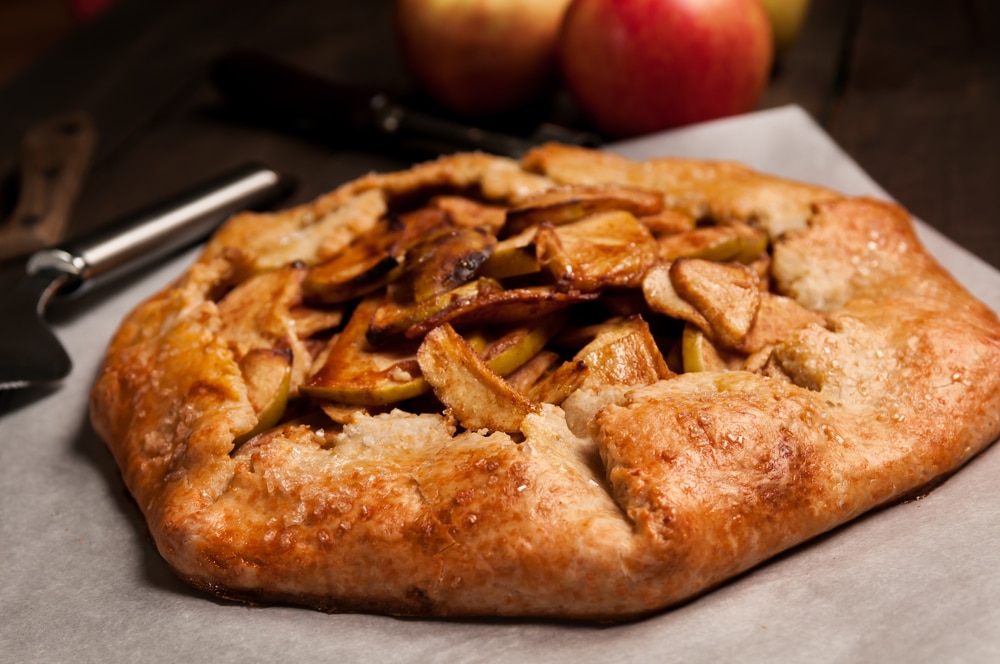 Like the more well-known crêpe, a galette is a thin pancake but made with buckwheat, giving it a darker, more porous look.  Confiture is the French word for jam, and is one of the main toppings eaten with sweet galettes, along with sugar, Nutella, whipped cream, and fruits.  Savory galettes can be eaten with any number of things, including egg, ham, and cheese.

While Brittany is a wine-producing region, known for its Muscadet white wine, the traditional drink is cidre.  Breton cider can be served either in a bowl or a cup. 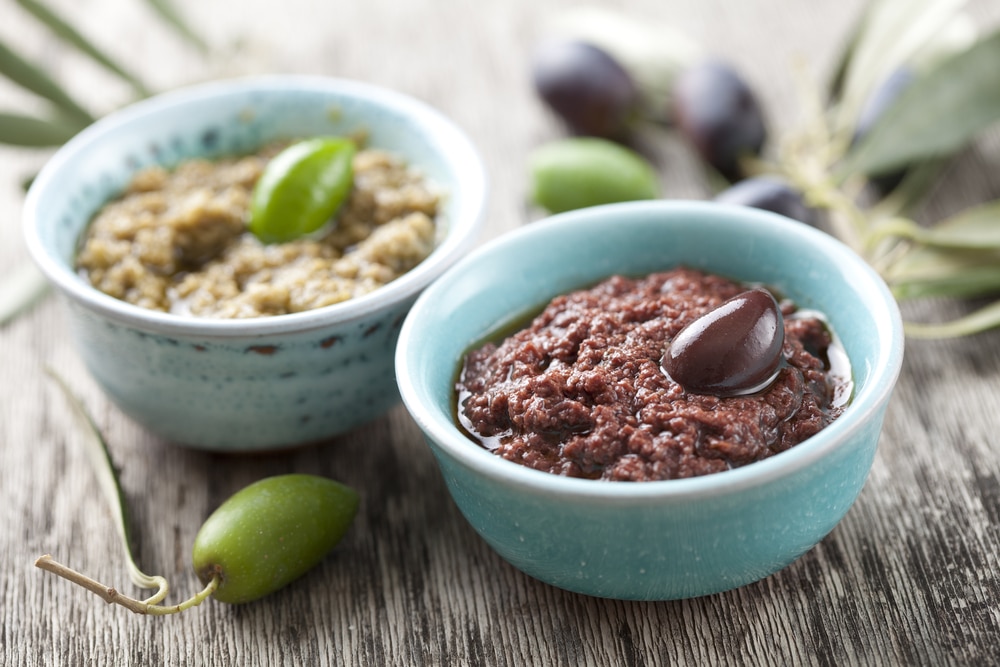 Apero, which is short for apéritif, can mean an alcoholic beverage served before a meal to whet the appetite, as well as a small snack eaten before the main courses.  A typical apéritif in the south of France is pastis, an anise-flavored liqueur diluted with water.  Tapenade is a puree of the flavorful Mediterranean olives of the region, made by crushing them with a mortar and pestle.  Anchoïade is a similar dish made by crushing anchovies and garlic.  The recipes for both are highly variable, but they are usually eaten with small pieces of toast or raw vegetables.

And no matter what you are cooking or ordering in the south of France, don’t forget to add the renowned Herbes de Provence. This mixture of dried herbs includes savory, marjoram, rosemary, thyme, and oregano, and is a wonderful addition to grilled meats, fish, as well as vegetable stews.  And luckily for you you, this taste of France can now be found at virtually any large supermarket.  No need to wait for the big trip to try it out! 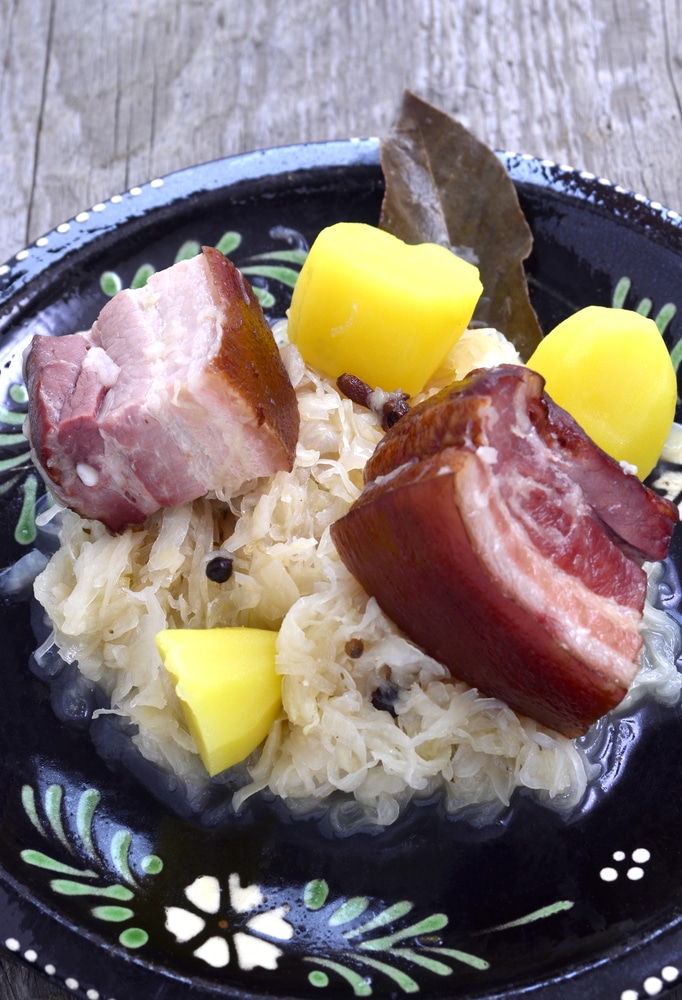 The Alsacian region has heavy German influences, and so one of the principal dishes found here is choucroute, or sauerkraut served with various accompaniments.  Although there is no fixed recipe, traditional ones include sausages, other cured meats, and potatoes.  This dish can be accompanied by the white wine of the region, such as dry Riesling, or beer.  A traditional Christmas treat is the sweet pain d’épices, or a cake sweetened with honey and spices like cinnamon.

Alsace is also known for its coq au Riesling, a chicken dish prepared with wine, cognac, cream, and vegetables.  Délicieux !  If you want to bring a bit of Alsace into your own home, try making a Flammekueche – a rectangular pizza made with crème fraiche, onions, and lardons (cubes of pork). 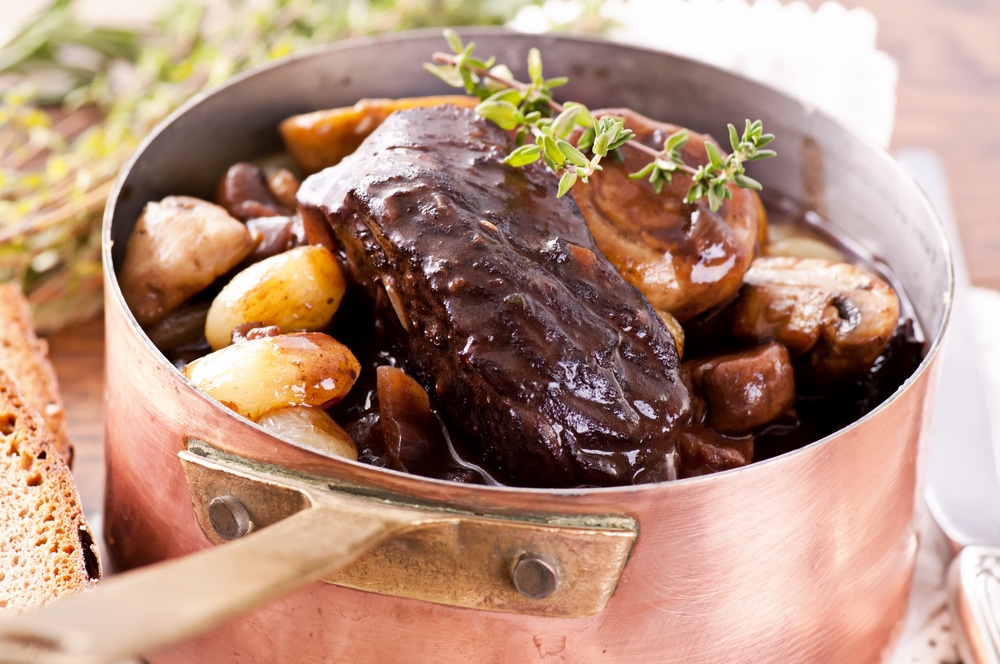 The Burgundy region is famous for its hearty dishes and rich sauces, and bœuf bourguignon is a stellar example.  Stewed in the red wine of the region, this dish has been elevated from simple peasant stock, becoming a standard of French cuisine and refined for even the most sophisticated palettes.

And, if one were to try any infamous French snails, it should be the escargots de Bourgogne.  When they are in season, they can be found live in the markets, to be taken home, cleaned and cooked.  They are decadently served in a rich butter, parsley, and garlic sauce, often in a special serving plate covered with small pockets for the shells. 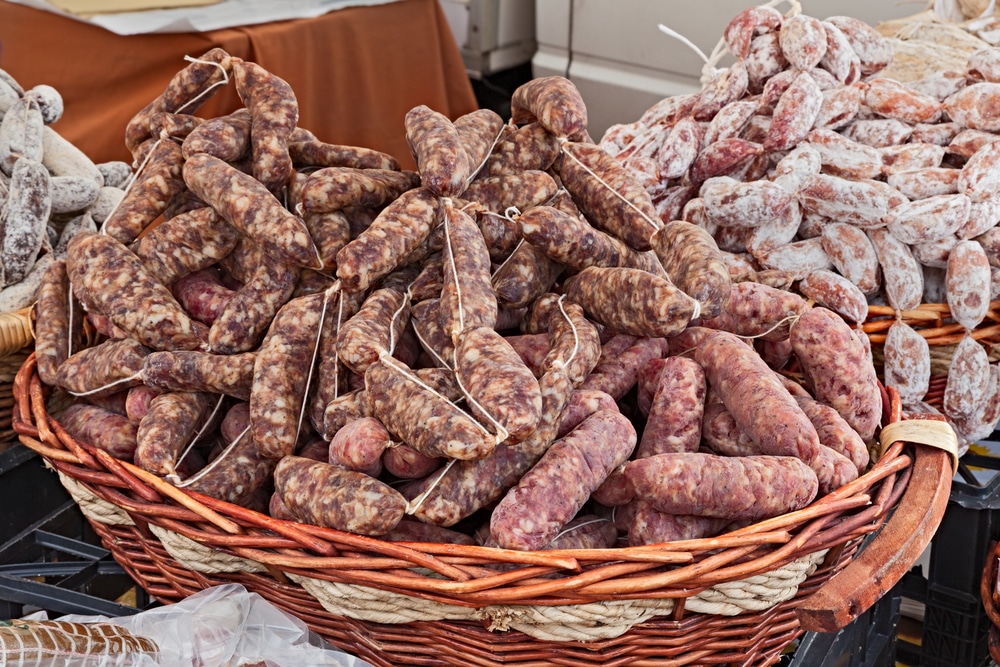 The French island of Corsica has culinary influences from both France and Italy all while keeping a distinct flavor of its own.  The wild boar found on the island is often stewed with an abundance of vegetables and herbs in order to make the meat tenderer and less gamey.  This is often served with pasta or polenta.  There are many kinds of charcuterie, or cured meats, to be found in Corsica, a typical one being the richly flavorful figatellu.  Both these dishes are delicious with any of the Corsican wines made on the island.

And a trip to a French island wouldn’t be complete without trying the regional cheese.  Brocciu is a young cheese made from either goat’s or sheep’s milk.  It can be found in a number of Corsican dishes, from pizzas, to pastas, to pastries, and even desserts. 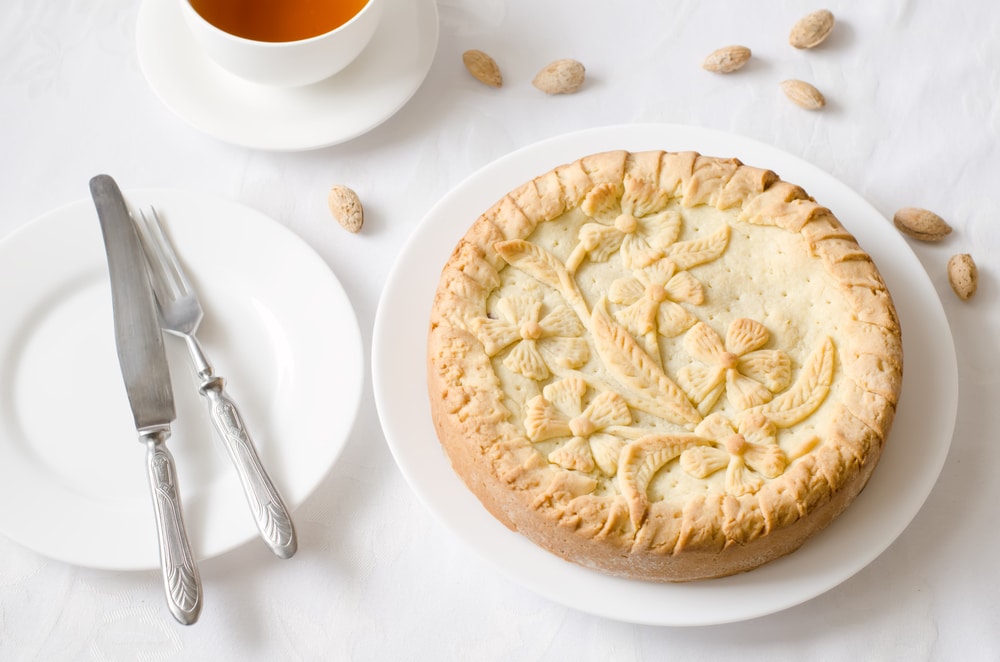 The cuisine is but one (delicious!) part of what keeps French and Spanish Basque country so distinctive.  Piperade is a vegetable dish similar to ratatouille, made with sautéed onions, green pepper, tomatoes, and red peppers.  This dish reflects the fierce pride of the Basque people as the colors of the ingredients match the color of the Basque flag.  It is served as both a main and a side dish.  A typical Basque dessert would be the gâteau Basque, a flat cake made with almond flour and containing a fruit or cream filing.

Je veux tout manger !
I want to eat everything! 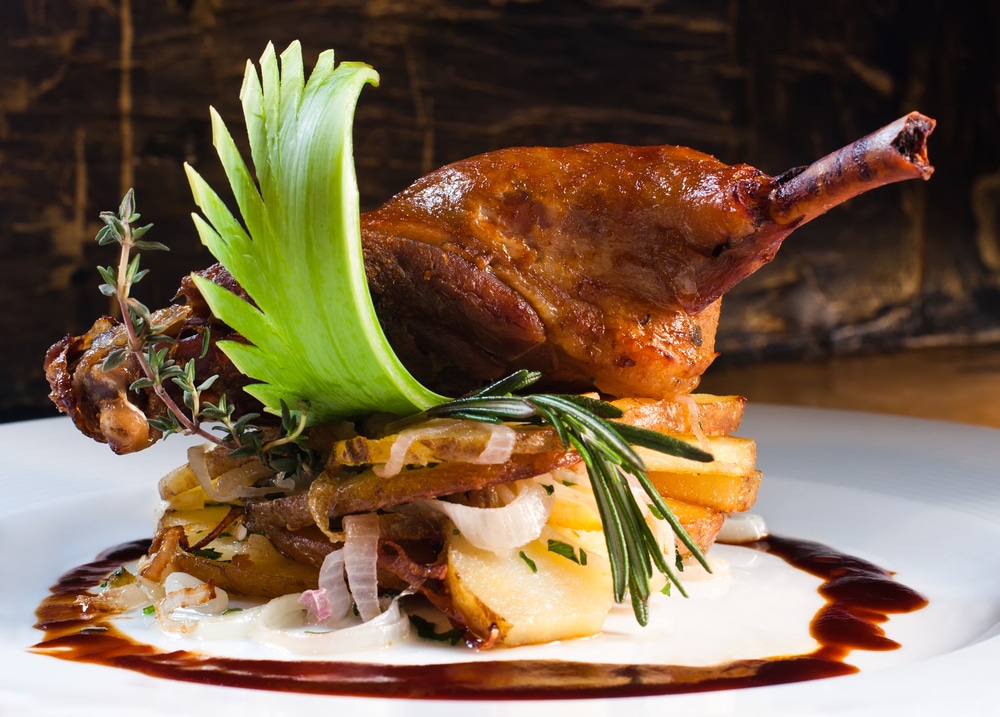 All roads lead to Paris, and this bodes well for the cuisine there.  Foods from all over France can be found in Parisian restaurants so why not try them all?  Start your meal with huîtres, or oysters, from one of France’s many seaside towns with a little lemon, shallot vinegar, and brown bread.  Then try a confit canard, or duck confit, a quintessential French dish originating in the Southwest made by preserving a leg of duck in salt and then cooking it in its own fat.  Don’t forget your salad with cheeses, whether it is a Camembert (Normandy), Comté (Franche-Comté), or Roquefort (Midi-Pyrénées).  Then finish up with a tarte tatin, a caramelized upside down apple tart with its partner Calvados, an apple liqueur made in Lower Normandy.

You’re now ready to tackle any corner of l’Hexagone (a nickname for mainland France) and its tables.

P.S. If you liked this post, be sure to check out our popular posts on French slang, idioms, and soccer / football vocab!