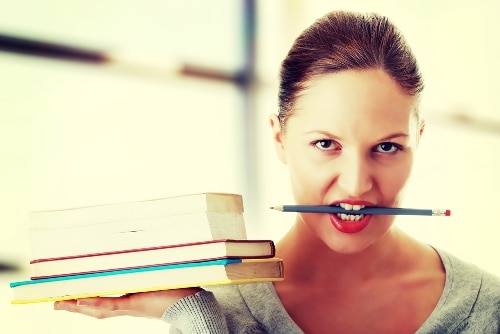 The AP French Language and Culture Exam in a Nutshell

Next to college admissions, it’s the most important academic challenge for teens in the United States.

Not sure what you might be getting yourself into or how to prepare?

Maybe you don’t even know if you’re using the right resources for improving your French listening, French reading and other important skills.

No need to fear! The fact is, while it does require hard work, just having the right information and being willing to put in practice makes preparing for the AP test a no-brainer.

Like any exam, it’s simple and straightforward once you’re aware of what you’re up against.

And once you’re prepared, you’ll be unstoppable.

So read on to find out exactly what you need to know.

Just what is the AP French Exam, anyway?

AP French, AP Math…if you’re in high school, you probably hear your friends and teachers talking about AP exams all the time. But what are they and why exactly are they so important?

AP stands for Advanced Placement. Many high schools offer Advanced Placement versions of their regular classes. If you’re reading this, you may already be taking one. Conceived by the College Board, the classes are taught with college-level rigor and culminate in an exam taken near the end of the school year. In the case of AP French, it helps to already be at the advanced level when you take the test.

How is the exam scored?

The exam is scored on a simple 1 (worst) to 5 (best) scale. Usually, a passing score is 3 or 4, but there’s no set limit. Keep in mind that, as with any standardized test, scoring well doesn’t mean you don’t have to put in any effort in college classes. There are many other factors that’ll determine your success in college French.

When and where do I take it?

Taking the AP exam is as simple as registering for AP classes in high school. Your school may already offer them, but if not, talk to your principal or French teacher about it. In many districts, there are subsidies available to offset the exam fee, offering a further incentive to take the test. You’ll take the exam in class during a normal school day.

How are AP exams different from other standardized tests, like the ACT and SAT?

Although they can all unfortunately be stressful, the AP differs significantly from the ACT and SAT. Whereas the latter two are essentially college admissions exams, the AP exam is normally taken as a way of “testing out” of courses. A poor score will not result in your admissions being rescinded if you’ve already been accepted by a college.

I want to study French in college…how will the AP French Exam help?

So the AP exam basically seems like work, right? If you’ve already been admitted to a college, or if your main concern is getting into a good college, why would you want to take another exam that isn’t even required?

How is the exam structured, and what’s tested?

Even though classes already have to tailor their curriculum to match what’s on the exam to legally be called “AP,”  familiarizing yourself with the AP test format will help alleviate your concerns come test day.

The full name of the AP French Exam is the “Advanced Placement French Language and Culture Exam.” This should clue you in to the fact that knowing how to speak and write French isn’t enough. You must also have knowledge of cultures and lifestyles in the French-speaking world.

The exam is 3 hours long, of which roughly half consists of multiple choice questions and the other half free response.

In the free response portion of the exam, your active (written and spoken) French is tested. First, you’re asked to respond to an email. Following that, you’ll write a more formal essay based on an article, a table or graph and audio clip. You’ll have 40 minutes to write the essay, during which time you can take notes and consult the given media.

Note that unlike French tests you might find in college, there’s no grammar section per se, although your understanding of French grammar and syntax factors into your scores for the written section.

The last portion of the exam tests your spoken French. First, in a simulated conversation, you’ll respond to questions one after the other. Next, you’ll deliver a presentation that demonstrates your knowledge of French and Francophone culture.

Study and test-taking tips from an AP pro

A lot of study tips for AP exams apply to all exams. But for those of you who, like me, don’t test well, here are a few specific pointers to keep in mind.

Although the AP exam tests content learned over the school year in which the test is taken, performing well early in your high school career will prepare you to excel in AP classes and thus pass the exam.

Do extra credit whenever offered because it’s usually more difficult than normal coursework.

You may have noticed language classes in high school feature a lot of games and simple worksheets, but don’t just blow through these activities! Take them to heart. Ask yourself what aspect of French these assignments are actually teaching you. Soon you’ll realize what you need to study to learn a language generally.

Something I used to do when learning French was to make a point of asking at least one question in class every day. When you enter the class, leave English at the door. Talk to the person sitting next to you in French, your teacher in French, even the fish in the class aquarium! Since the exam tests conversational skills, actually practicing speaking is critical.

If you’re really serious, summer classes are a good option as well. Taking a three-month break when learning a language will set you back to square one.

Take full advantage of the resources available to you

Keep in mind you’ll be casually studying for the AP French Exam throughout high school, so take advantage of this time: Read in French whenever possible, find a penpal and ask questions. I can’t stress that last one enough.

Think of it this way: If you start learning French your freshmen year, you’ll basically have four years of free lessons. An adult would spend thousands for the same amount of instruction!

If you’re a beginner, though, it can be hard to know how to start and how to get the most out of the resources you do have. The first obvious resource is your teacher. They may be able to help with recommending penpals, books or relevant extra credit.

If you’re like me, though, you’d rather keep doing what you already enjoy doing, but in French. So expand your interests into French-speaking culture: Set your Facebook page to French, get into current French-language music or even find some cool YouTube videos!

Finally, as the AP French Exam approaches, check out the great practice resources provided by the College Board here, including a sample exam and practice tips.

While knowing advanced French is a plus, don’t forget what you learned when you were just starting out. Things like incorrect gender, forgetting to use the subjunctive and improper conjugations are simple mistakes that even advanced (or native) speakers can commit. Don’t fall into that trap.

The best way to master things that require rote memorization (aka gender and use of the subjunctive) is to read in depth. As you read, take mental note of every noun and its gender. If you read often, you won’t have to consciously try to memorize lists of words.

As for conjugations, remember that the present tense, although it may be deceptively simple-seeming, has the most verb endings to memorize.

Finally, even if you don’t cover it in class, you may come across the rare passé simple, so make sure to study it beforehand.

This one’s very important. Remember, an email isn’t an essay, and a conversation isn’t a presentation. When you write your email, write as if you’re a French person casually writing to another French person. Same with the conversation. It’s during the essay and presentation where you want to show off how formal and informative you can be!

Try throughout your time in high school to write emails in a grammatically correct, conversational tone, and not just in French but in general. The first lesson in most technical writing classes is “know your audience.” The same goes for essays and presentational tone. Not only that, your teachers will really appreciate your effort to avoid text speak!

The audio section presents the stress of only being able to listen to the audio twice. The key here is to listen holistically. Don’t try to understand every word; that’s not necessary to answer the questions. If you dwell on a word you didn’t understand, you’ll miss the rest of the audio.

To best practice for this session, it’s best to listen to audio clips similar to those on the exam and listen carefully.

One of my favorite resources is found here. Hosted by the Scottish government, these exercises feature written transcripts for verification and give a similar pace and clarity to what you’ll hear on the test.

Another great resource is the French section of About, which includes listening tips, clips arranged according to skill level and realistic subjects that sharpen your cultural awareness.

Whatever audio you use, listen as much as you can. Initially it’ll be hard, but over time you’ll get used to it.

You too can pass!

With ample preparation, not only can you pass the AP French Exam, but you can improve your French hugely in the process.

Take it from a seasoned veteran of AP exams and standardized testing in general.

There’s nothing on the AP French Exam that you can’t do, especially if you’re already a passionate learner.

Tout vs. Tous: All You Need to Know About “All” in French
Your Online Textbook: 35+ YouTube Resources to Learn French