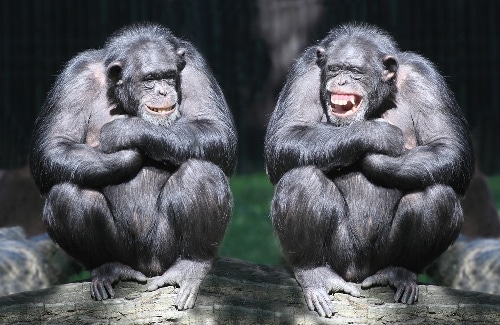 The famous Soviet-American comic Yakov Smirnoff once said: “Everybody laughs the same in every language because laughter is a universal connection.”

Universal describes something that everyone does and understands. Smirnoff may have been making a joke, but he had a good point—laughter and emotions are something that all cultures share.

Laughter might be universal, but humor is not. What makes you laugh might not be funny to everyone.

More importantly, though, something funny in your language might not be funny to a non-native speaker.

That’s true for English, too. Jokes and humor in English can be difficult for English learners to understand, which is why it’s a huge deal when a joke in English makes you laugh!

When you start finding English humor funny, you know you’re not only understanding the words, but also the culture. And that’s no laughing matter!

Why Learn English with Humor?

How to Learn English from Funny Books

Humor is everywhere. You can find funny movies, TV shows and even commercials that use humor to entertain the people watching. And it’s important to listen and watch people speaking English, so you can learn a lot of English from humor.

But there’s another place where you’ll find lots of humor in English: books. Learning English from funny books gives you a chance to take your time (go slowly) or speed through it, and to find the kind of humor that you really enjoy.

To really learn a lot of English from your funny books, though, try these tips:

So you’re ready to read, learn and laugh. Where do you start?

There are literally thousands of books in the “Humor” category on Amazon. When you’re choosing a book to read, remember that:

Below you’ll find a list of 15 funny books to get you started. The books are arranged in order of difficulty, which means as the numbers get higher, the books get more challenging. We’ve included the first sentence (or first few sentences) of each book to help you decide which book is at your level (and which book you might find funny).

Find a comfortable level and a funny book, and you’re ready to learn!

1. “Diary of a Wimpy Kid” by Jeff Kinney

This book might be about a school boy, but you can enjoy it even if you haven’t been in school for years. “Diary of a Wimpy Kid” is about a middle school boy as he deals with school and family issues. The easy writing and cute illustrations (drawings) make this a great book for beginning English language learners.

First of all, let me get something straight: This is a JOURNAL, not a diary.

2. “Calvin and Hobbes” by Bill Watterson

“Calvin and Hobbes” is not a regular book: It’s a comic book. The adventures of little boy Calvin and his imaginary tiger friend Hobbes are classics, loved by many over the years. Even if you don’t like comic books, give this one a try—you might be surprised at how clever and thoughtful the humor is.

So long, pop! I’m off to check my tiger trap!

Roald Dahl is known for his many children’s stories, like “James and the Giant Peach” and “Charlie and the Chocolate Factory.” In “The BFG,” Dahl creates another charming, if a bit scary, world in which a girl and a giant team up to protect the world’s children from becoming dinner. As a children’s book it’s simple enough for beginning English speakers, but as an older children’s book, it can also be a little challenging in parts.

Sophie couldn’t sleep. A brilliant moonbeam was slanting through a gap in the curtains. It was shining right on to her pillow.

Pippi—whose full name is Pippilotta Delicatessa Windowshade Mackrelmint Efraim’s Daughter Longstocking—lives in a huge mansion with her pet horse and friend monkey, and dreams of the day her father will return from the ocean. Pippi’s many adventures and stories are as crazy as they are funny. She’s a lovable child who will remind you how to be a child yourself!

5. “An Abundance of Katherines” by John Green

Colin had a girlfriend named Katherine. Actually, he had 19 of them, and they all dumped him (broke up with him). So he sets out in a car with a friend to travel across the country where he has many laughs and life lessons, but no Katherines. “An Abundance of Katherines” is a funny, heartwarming book about finding out who you really are.

The morning after noted child prodigy Colin Singleton graduated from high school and got dumped for the nineteenth time by a girl named Katherine, he took a bath.

6. “Queen of the Road” by Doreen Orion

If you like the idea of traveling across the country like in the previous book, but would rather do it with a shopaholic, shoe-loving, Long Island “princess,” “Queen of the Road” is the book for you. The story follows Doreen and her husband Tim as they visit strange places in 47 states, giving you a look into life in the less known parts of the United States.

When my long-dreaded thirtieth birthday arrived, I really wasn’t as upset as I imagined I’d be, for I had achieved a much more important milestone: my sartorial centennial. I owned one hundred pairs of shoes.

7. “Another Fine Myth” by Robert Asprin

Fantasy lovers, don’t worry—there are lots of funny fantasy and science fiction books too. Robert Asprin’s Myth series is about a group of strange companions who go on adventures together, trying not to kill each other on the way. The first book in the series, “Another Fine Myth” introduces the main character Skeeve. Skeeve is a magician’s apprentice and thief who suddenly finds himself without a master when the magician he was working with is killed. Join the adventure and laugh at the company’s misfortune!

One of the few redeeming facets of instructors, I thought, is that occasionally they can be fooled.

8. “Me Talk Pretty One Day” by David Sedaris

David Sedaris is a humorist who writes many books about life and the world, making you laugh at even the most serious moments. “Me Talk Pretty One Day” is a collection of short stories from his life, from trying to learn French to dealing with his lisp (inability to pronounce the letter “s”). Sedaris has a very friendly way of writing, as if he is telling you his story in person, which makes it fun and fairly easy to read at any level.

Anyone who watches even the slightest amount of TV is familiar with the scene: An agent knocks on the door of some seemingly ordinary home or office.

Tina Fey is well known as a comedian on “Saturday Night Live” and a few TV shows, including “30 Rock.” In this book she talks about what it was like to grow up from a strange little girl to a strange little girl on TV. Tina Fey has a very unique sense of humor, so if you liked any of her shows or “Saturday Night Live” skits (short plays), then you’ll enjoy this book.

My brother is eight years older than I am. I was a big surprise.

10. “Hitchhiker’s Guide to the Galaxy” by Douglas Adams

Imagine you wake up one day to find that your home is about to be destroyed to make room for a road. Now imagine this is happening to the entire Earth, to make room for a space traveling road for aliens. You would probably do the only thing you can: hitch a ride (get a ride) from some passing aliens and hope for the best.

In “Hitchhiker’s Guide to the Galaxy” you will meet a two-headed alien running for space president, a depressed robot and many other crazy characters. Some of the language can be tough, but the amount of laughs you can get from this classic book make it worth it!

Far out in the uncharted backwaters of the unfashionable end of the Western Spiral arm of the Galaxy lies a small unregarded yellow sun.

11. “The Importance of Being Earnest” by Oscar Wilde

Being earnest means being truthful. Ernest is also a name. “The Importance of Being Earnest” takes these two ideas and plays with them for the entire play. The play is old but still very easy to love, as it deals with how funny rich people and the “upper class” can be. There is a lot of lying and silly mishaps (unlucky accidents) that can make this play difficult to follow for an English learner, but it’s fun and highly recommended if you’re a bit more advanced.

Algernon: Did you hear what I was playing, Lane?
Lane: I didn’t think it was polite to listen, sir.

The apocalypse is coming and the world is about to end, and all it needs is one very important boy. Unfortunately, no one seems to be able to find him. An angel and a demon have to forget about their differences and work together to stop the world from ending. Written by two expert storytellers, “Good Omens” is a fun ride through their version of what really happens in the Bible’s Book of Revelations.

It was a nice day. All the days had been nice. There had been rather more than seven of them so far, and rain hadn’t been invented yet.

What’s it like to have a relationship today? Comedian Aziz Ansari (known for his role in the TV show “Parks and Recreation”) tries to understand what it’s like to find love in the modern age. “Modern Romance” mixes science with humor for a book that will make you laugh as much as it will teach you about love in the 21st century.

Many of the frustrations experienced by today’s singles seem like problems unique to our time and technological setting: not hearing back on a text.

14. “Choose Your Own Autobiography” by Neil Patrick Harris

Autobiographies tell the story of the author’s life. Choose Your Own Adventure stories are adventures in which you are the hero, and you choose where the story goes next. So how did actor Neil Patrick Harris manage to put the two together? “Choose Your Own Autobiography” is the story of Harris’s life, as if you are him. Go through his life and make his decisions for him. It’s funny and creative, and perfect if you’re looking for a more… unique kind of humor.

You, Neil Patrick Harris, are born in Albuquerque, New Mexico, on June 15, 1973, at what you’re pretty sure is St. Joseph’s Hospital, although it’s hard to be certain as the whole experience leaves you a little blurry.

You might be surprised at how much of what you learned in school is wrong. Dinosaurs don’t look like lizards—they have feathers. In this book, you will learn that we don’t have only five senses, chameleons don’t change color to blend in with their surroundings, and much more about the world, history and yourself.

“The De-textbook” has some crude (rude) humor, and it also makes many references to pop culture and history. You can use this book to learn new facts about the world, but also to learn about culture, internet humor and more.

Naturally, you’re curious about this meat locker you find yourself locked inside.

It might take some time to find the kind of book that makes you laugh out loud. While you look for that one book you find hilarious, you can find many others that will at least make you smile. Remember to enjoy your books as much as you learn from them!