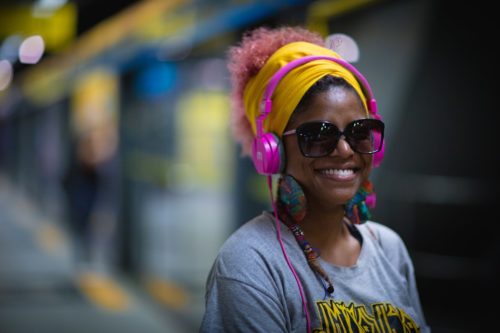 You know that feeling when something just does not seem to end?

Or all those moments that you wish could continue for longer?

Maybe it is that book you have been reading for the past two years.

Or it is that vacation you have been trying to plan for months now.

In the English language, there is a whole tense devoted to describing these situations.

It is called the continuous tense in English, or the progressive tense.

This tense is used to describe actions or states that progress through time. As a rule of thumb, most verbs ending in -ing are in one of the forms of the continuous tense.

There are six main continuous tenses in English, and that probably sounds like a lot to you right now. But, through the following easy explanations and catchy songs, you will get the hang of them in no time!

The 6 Main Continuous Tenses in English

The dogs are sleeping.

I am going to Paris next month.

I have been trying to study for my math test for the past three hours.

She has been practicing for the play for months.

I haven’t been feeling well for over two weeks.

He hasn’t been working very much lately.

I was cleaning my house last night.

We were driving through the mountains all night.

It wasn’t raining when I left work.

They weren’t planning on coming to the party.

The thief had been breaking the locks when he was caught.

He had been writing his first book when I met him.

I will be completing my school project this Sunday.

She will be coming to the party tomorrow.

I will have been working in this school for six years next month.

He will have been traveling for an entire year in March.

Ready to learn those English continuous tenses as they are actually used? Great! Below, we look at 11 pop songs that use the tenses in a way that will help you remember them in a fun and catchy way.

If you find that learning English through songs is your style, lucky you, because FluentU has hundreds of music videos complete with interactive subtitles, vocabulary lists and quizzes just waiting for you to click play. So if you want more songs (as well as movie trailers, news clips, inspirational talks and much more), check out the free FluentU trial!

“Rolling in the Deep” by Adele

This is a very famous song by Adele. It is about a woman who has been betrayed by her lover. In this song, she is expressing her pain and anger and goes on to tell her ex-lover that they could have had a good relationship.

Rolling: To move by turning over and over again.

The fragrant (good smelling) flowers have been bringing butterflies to the garden. (present perfect continuous)

The ball is rolling down the hill. (present continuous)

A wrecking ball is a big, metal ball used to destroy buildings. In this song, it is used as a metaphor. The song is about a girl who is in pain after her relationship ended. The wrecking ball is a symbol for the lover who figuratively (not literally) destroyed her life.

Running: To move very fast, or to manage or operate something.

Coming: To arrive somewhere, or something that is about to happen.

I have been running the store by myself for the past year. (present perfect continuous)

He will be running in the marathon later this week. (future continuous)

I will be coming to your house later. (future continuous)

“We Will Rock You” by Queen

In its simplest explanation, this famous song is about staying motivated, encouraged and positive even when everything seems to be going against you.

Playing: To do something for enjoyment and entertainment.

Kicking: To hit something with force using your foot.

Shouting: To increase the volume of your voice to say something or to get someone’s attention.

Waving: To move your hand side to side to greet someone or get someone’s attention.

Ross is playing with the ball. (present continuous)

They had been playing in the backyard all afternoon. (past perfect continuous)

The fans were shouting at the basketball game. (past continuous)

He was waving at me in the market but I could not see him because I did not have my glasses on. (past continuous)

The children have been pleading with their parents all weekend to take them to the waterpark. (present perfect continuous)

A rolling stone is a metaphor in this song. It symbolizes the fall of pride and arrogance in the main character of the song who was once rich and part of high society.

Hanging: To be suspended (stuck) in the air. The phrase “hanging out” means to casually spend time with your friends or other people.

Selling: To give away something for money or at a price.

He was hanging out with his best friend. (past continuous)

I have been selling my basketball cards online. (present perfect continuous)

This song is a duet, which means that it is sung by two singers. It is about dissatisfaction and yearning (wishing) for a life that is full of meaning and that is not shallow.

Searching: To look for something.

Falling: To descend quickly from a high to a low place without control.

She will have been searching for her lost dog for 12 hours by dinnertime. (future perfect continuous)

He is falling for that girl in his class. (present continuous)

“Hotel California” by The Eagles

This song might be confusing as an English learner because the meaning of its lyrics is not very clear. Many people believe that this song is about the culture of greed, pleasure and excess in America and the music industry.

Calling: To vocally try and get someone’s attention or to say something to someone.

She has been running everyday. (present perfect continuous)

He was calling for his cat that disappeared sometime last night. (past continuous)

In this song, Bryan Adams talks about the first time he formed a band with his friends in the year 1969. In the song, he explains how even though the band did not last for a very time, he still remembers that time quite fondly (in a positive way).

Killin’: Contraction of the word killing. It can mean to take the life of someone, or in casual English, it can be used in the phrase “killing time” to refer to wasting time or waiting for time to pass.

Changin’: Contraction of the word changing. It means to transform or to become different.

Standin’: Contraction of the word standing. It is the opposite of sitting.

The boys were killing time by playing games on their phones. (past continuous)

They have been standing on the sidewalk waiting for the bus for hours. (present perfect continuous)

“Shape of You” by Ed Sheeren

This is a simple song about someone’s attraction to a stranger they met in a bar and the romantic relationship that developed after a few dates.

Falling: To go down fast, end up behind, or in this context, to break.

He has been drinking a lot on the weekends lately. (present perfect continuous)

She is singing in the school’s musical next month. (present continuous)

He is falling behind in the race. (present continuous)

“Love Yourself” by Justin Beiber

This song is another break-up song where the singer talks about how he does not have feelings for her ex-girlfriend anymore.

Crying: To shed tears or state something loudly.

Movin’: Contraction of the word moving. It can mean to change place or position or to make someone very emotional. The phrase “moving on” means to recover from a bad experience. It is usually used in the context of relationships.

Holdin’: Contraction of the word holding. In this line, “holding on” means to hold onto your emotions. It is used in a context where it is assumed that one should not be feeling what she or he is still feeling.

He was crying out loud when he saw that his house was burning. (past continuous)

Nancy will be moving to another city next summer. (future continuous)

She had been holding her friend’s purse all night. (past perfect continuous)

This song is about people trying to appear and act a certain way such as tough, strong, mean or masculine.

Creeping: To move so slowly that no one can see or hear you. It is also used when something negative happens very slowly.

Wanting: To desire something.

Wearing: To wear clothes or accessories.

The cat was creeping towards the mouse. (past continuous)

I have been wanting a piece of chocolate all day. (present perfect continuous)

She is wearing her favorite dress today. (present continuous)

This is a song about a boyfriend who is jealous of other people but does not want to feel this way.

Dreaming: To think about doing something in the future or reflect upon the past.

Beating: To throb or pound.

Feeling: To experience some emotion.

Shivering: To shake uncontrollably because of cold, fear or pain.

Swallowing: To push something down your throat. Here swallowing is used metaphorically and means that he was hiding his pain rather than expressing it.

He has been dreaming about going to the Great Wall of China for years. (past perfect continuous)

Her heart was beating so fast when the boy she likes said hello to her. (past continuous)

I have been feeling very sad since I found out they will be moving away. (past perfect continuous/future continuous)

He was shivering from fear as his father asked for his report card. (past continuous)

She had been swallowing her anxiety for the entire performance. (past perfect continuous)

Aside from being some of the most famous songs on the planet, these songs will help you practice and tune your ear to the six continuous tenses that are most commonly used in English. And, an added benefit to this form of practice is that these songs are also just great to listen to!

All You Need Is Love! Say I Love You in English with These 25 Romantic Expressions
What’s the Difference Between To and Too? A Too-simple Guide to Mastering These Important English Words