You’ve probably come across tons of vocabulary lists, with one simple translation per character or word.

But if you have any experience with the language, Chinese characters rarely have a singular definition.

On top of that, characters can take on different tones and pinyin, depending on the definition and which part of the sentence it’s supposed to be.

Luckily, characters offer phonetic and semantic clues. And with a character like 过 guo in Chinese, you only really have to deal with a tone change when you want to switch between meanings.

Let me break down 过 for you.

What Does Guo Mean in Chinese? 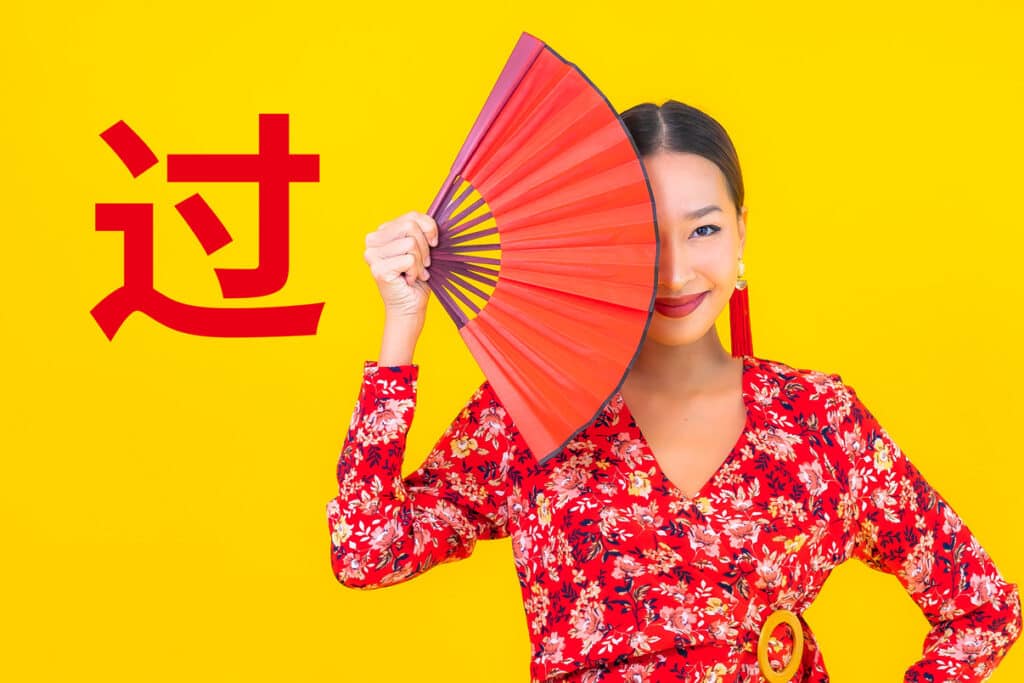 Overall, 过 represents the idea of passing some kind of boundary or limit. Whether it’s abstract or concrete depends on how it’s used in a sentence.

When it takes on the fourth tone, 过 (guò) works as a verb or an adverb.

As a verb, 过 generally means “to cross over somewhere physically” or “to pass in time.”

When paired with another character, 过 forms an adverb that more or less means “past” or “too much.”

When it takes on the fifth or neutral tone, 过 (guo) works as an aspect particle to show that an action has occurred at an unspecified time in the past.

The Chinese Radicals for Guo

Since Chinese radicals can provide semantic and phonetic clues to the meaning of words, you might be interested to see a quick breakdown of 过—this kind of context is great for committing new characters to memory.

过 is composed of two parts:

This lets us know that the character has to do with some kind of movement over a short distance. You’ll see this in the various definitions and uses of guo below.

Beginners will most likely recognize 过 as a verb. 过 on its own has several definitions, but it can also be combined with other characters to form compound verbs in Chinese.

Let’s take a look at all of the definitions of 过 when it functions as a verb.

Perhaps the most common definition of 过 is “to cross” or “to go across,” which indicates the basic idea of the rest of the definitions.

Following this notion of time, 过 can also be used when talking about a duration of time passing, such as the workweek.

If you want to discuss how you spend your time, particularly when concerning days off, holidays and such, 过 is the appropriate verb to use.

Here’s the first compound verb. With 去 (qù) meaning “to go,” it makes perfect sense that 过去 would mean “to pass by” or “to go over.”

Because 来 (lái) means “to come,” it’s only natural for 过来 to mean “to come over (here).” Check out the example below to see how to use it in a sentence.

过来一下，我想跟你谈谈。(guòlái yíxià, wǒ xiǎng gēn nǐ tán tán.) — Come over here for a moment. I want to talk with you.

超 (chāo) on its own means “to exceed” or “to overtake,” but 超过 is the full vocab term.

过 (guò) as an Adverb

过 can also be used to modify a verb. In other words, it can manifest as a Chinese adverb, usually paired with another character.

过 adverbs can be placed before or after a verb in a sentence.

When you want to show something is overly or excessively done, you can use the adverb 过度.

经过 has several definitions, meaning “pass” or “course” as a noun and “to transit” as a verb. As an adverb, it means “by” or “past.”

不过 can work as a conjunction in Chinese, translated as “but” or “however.” As an adverb, 不过 is placed before the verb in a sentence to mean “solely” or “(nothing) but” as seen in the following sentence.

过 (guo) as an Aspect Particle

When pronounced with the fifth or neutral tone, 过 becomes a particle, more specifically, an aspect particle in Chinese.

Because tenses and verb conjugations at large don’t exist in basic Chinese grammar, the language relies on words known as aspect particles to demonstrate the duration in which the verb is occurring in. Basically, an aspect particle is a function word that describes how an experience or action relates to a certain timeframe.

10. 过 marks a past experience or past action

When talking about actions that have been completed at an unverified point in the past, you’d place 过 immediately after the verb of the sentence. This is also very similar to the present perfect in English.

It’s worth pointing out that 过 implies that an action happened at a nonspecific time in the past, which is different from 了 (le), another aspect particle associated with actions completed in the past.

Although the Chinese “le” also demonstrates a past action, 了 indicates that the action was completed at a definite point of time, where the timeframe has already been defined in the statement or can be implied from context. Simply put, 了 is pretty much the same as the past tense in English.

Just to reiterate, the verb + 过 formula would be used when discussing past actions that have no definite timeframe, as seen in the example below.

It’s true that most verbs are negated with 不. However, when 过 as an aspect particle is involved, you’re discussing whether or not a subject has carried out the action, implying the “have + verb” construction. “To have” in Chinese is 有 (yǒu), and because 有 is negated with 没, verb + 过 would also be negated with 没, where the sentence construction would be 没 + verb + 过.

This negated form can be translated to never have + past tense verb, as you can see in the example provided below.

If the explanation seems a bit complicated, you can think of the construction as 没(有) + verb + 过. You can add 有 into the sentence above without changing the meaning of the statement.

Even though guo in Chinese functions as different parts of speech, the central theme of the definitions is the passing of some kind of boundary, whether it’s physical or something more abstract like time. Thus, there’s really no need to be intimidated by all these definitions!