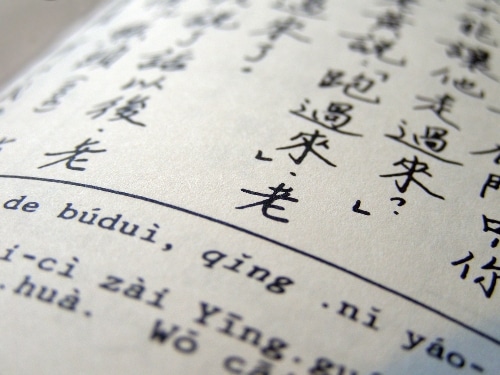 How to Read Chinese: The Newbie’s No-stress Guide

“How can anyone read this? It’s impossible!”

Of all the reasons why people think learning Mandarin Chinese is difficult, nothing comes up more commonly than those supposedly crazy characters.

To an untrained eye, they do indeed appear incomprehensible.

Just the sight of them can bring on frustration, discouragement or even outright panic!

However, there’s really no reason to get all bent out of shape.

Chinese characters are not significantly more difficult than those in other writing systems.

So let’s just dive right in and uncover the mystery of how to read Chinese.

Take a deep breath, relax and discover how you should be reading Chinese!

How to Read Chinese: The Newbie’s No-stress Guide

​Don’t panic! There’s a system to the madness

Even for beginners, it should soon become readily apparent that Chinese characters are not just “random drawings.” They actually follow a reasonably neat system by which characters can be easily split up into their component parts, making them much simpler to understand.

The first and most important part of Chinese characters is what are called radicals. These are elements (usually found on the left hand side, or underneath a character) that suggest the meaning based on broad categories.

A simple example of this is the wood radical, based off the Chinese character for wood, 木 mù.

This character can then be found as a radical in a number of wooden objects such as 桥 qiáo (a bridge) or 楼 lóu (a building). Chinese is generally accepted to have 214 radicals, and these range from ones that convey a literal meaning to ones that convey a more vague feeling.

Are you with me so far? Okay, let’s move on.

Another important grouping within Chinese characters is pictograms. These are characters that are meant to look like the object or thing they represent. While the obvious similarities have been lost over thousands of years, with a little imagination and understanding of Chinese culture, you can start to recognize meanings. Some examples of these include 人 rén (person), 高 gāo (tall, represented as a tall pagoda) and 山 shān (mountain).

Similar to pictograms, ideograms are another old and somewhat confusing element of Chinese reading. These are characters that were pictographic representations of themes, rather than things, which have since been highly stylized.

A good example of these is the character 互 hù, meaning “mutual,” which is a representation of two people holding hands. Such characters aren’t generally understandable on first viewing, but much easier to remember once the backstory is learnt.

Okay, now the most common (and indeed most important!) group of characters for any Chinese reader are so-called pictophonetic characters.

Now pay close attention, because learning these phonetic elements is the key to learning to read Chinese.

How to use Chinese phonetics to read like a pro

Beware of commonly used association methods—they can stab you in the foot!

When many people start learning Mandarin Chinese, they are introduced to pictographic and ideographic characters, and think that associating a character with a picture (and a meaning) is a good idea. Seems like an okay strategy, right? But watch out!

While this can be effective for the first 100-200 characters you might learn, such a strategy will inevitably fail. This is due to the fact that such characters make up only around 10% of the total Chinese characters, meaning that your picture-associations will have to get progressively more outlandish and creative as your studies advance. Talk about crazy!

Luckily, there is a better way to read Chinese. Most of the Chinese language is written in pictophonetic characters, meaning that you simply need to learn all of the phonetic elements to be able to read significant portions of Chinese texts.

“Okay,” you’re thinking, “But what are these phonetic elements?”

Well, often these are difficult to tell apart from radicals, and unfortunately they are rarely taught officially by Chinese teachers who prefer rote learning of pronunciation and meaning. But once you start using at least a few hundred characters, patterns of pronunciation will emerge.

For example, almost all characters with 巴 bā in them—such as 吧 ba (final particle), 把 bă (“to hold”), 爸 bà (“father,” “dad”) and 疤 bā (“scar,” “scab”)—will also be pronounced ba no matter what their meaning is, and no matter what additional radicals they have with them.

In fact, the best way to pick up on these patterns is by constantly encountering these pictophonetic characters in authentic Chinese content. For that I recommend FluentU!

How to use this to read fluently

Often you’ll know the pinyin of a word far before you know its characters, and so by sounding the characters out using these phonetic sets, you’ll have a good chance of guessing their meanings.

Sneaky problems that may trip up beginning readers

Okay, so now that you know how you should be reading Chinese characters, it’s also important to identify the common problems and mistakes that learners make when reading Chinese as a second language.

No two characters are the same—avoid lookalikes!

One of the most common mistakes that learners make is confusing two very similar characters. These include characters that are almost identical except for the radical.

Such character pairs—for example, 情 qíng (“feeling,” “emotion”) and 清 qīng (“pure,” “just”)—often are made more confusing by the fact that they have the same pronunciations.

Another kind of character similarity, such as that between 木 mù and 术 shù (“method,” “technique”) can occur when two characters very different in meaning and pronunciation have just a single stroke of difference between them.

Watch out for characters with alternate pronunciations

But luckily, such multi-pronunciation characters are quite rare, and they can be easily learnt and recognized.

One final area of difficulty, which every learner without exception will encounter…is a text that’s just full of unknown characters. While it is impossible to guess the meaning of every character, there are some helpful hints that can be followed.

Nouns can be guessed by their radicals

With some understanding of Chinese grammar, it is reasonably easy to tell which Chinese words in a given sentence are nouns, verbs, adjectives and adverbs. For the nouns, at least, it is often possible to work out what kind of object an unknown word is, based off its radicals and knowledge of the content.

For instance, words with the heart radical 心 xīn generally refer to emotions or feelings, while something with the gold radical 金 jīn is likely some kind of metal or element.

Some of the most hard-to-read characters come in the forms of toponyms (place names). Often these can be completely unique characters—as in the case of the 峨 é in  峨眉山 é méi shān (a mountain in Sichuan province)—or be otherwise incredibly rare.

In many cases, like in the previous example, it is easy to tell this is a toponym by the fact that the character for a certain kind of place (such as a mountain, lake, river or valley) is used.

In other cases, for the transliteration of non-Chinese toponyms or the names of people, a very small group of characters is used consisting of basic phonetic sounds. Such characters are easy to identify and read, even if their actual meaning is unknown.

So put your skills to the test—get reading!

Now that you know about how the Chinese character system works, along with its intricacies and difficulties, the next step is obvious.

You just have to start practicing.

Read, read, read Chinese, and then read some more!