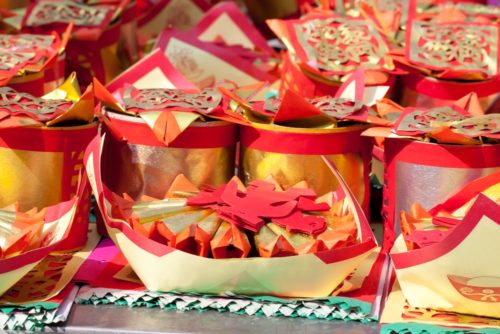 Do you remember back when you were a kid?

The scariest thing out there were ghost stories!

You may have cowered in fear, hiding under the covers and promising to be better tomorrow, just so long as the ghosts didn’t visit and scare you that night.

But as we grow older, we know better than to believe these stories, and we would simply dispel them as myths. But in the Chinese culture, young and old alike regard them not as myths but as a reality.

Chinese believe that both the skies and the grounds would open up and the spirits, even those from long ago, would come back and mingle with the living, all in a span of one month.

This happens in the seventh month of the lunar calendar, and is more popularly known as 鬼月(guĭ yuè), or the ghost month. In terms of the western calendar, ghost month usually falls in late July or early August. This year, 2014, the ghost month begins on July 27.

It is during this time that spirits are highly believed to roam around the living, looking for and visiting their families. But for spirits who no longer have families to go to, they search for victims on whom they can feast.

To learn more about the Chinese culture and the traditions held during the ghost month, here are ten Chinese vocabulary words associated with the period. Each vocabulary word is followed by a sample sentence, its pinyin, the English translation and a short description about how the word relates to the ghost month. What should we prepare in celebration of the Hungry Ghosts Festival?

The Hungry Ghosts Festival occurs on the 15th day of the ghost month, wherein feasts of various offerings are prepared for the spirits to wine and dine. Why the 15th? It is believed that the middle of the month is the time when the spirits are in full force, so sumptuous feasts are prepared to appease their hunger. The belief is that if their hunger is satisfied, then they would not feast on the family members and no accident would befall the family.

During the ghost month, do not run around to avoid bumping into evil spirits.

There are two kinds of spirits that visit us during the ghost month: the good and the bad. The bad spirits are seeking revenge, and belong to those who died an untimely death due to murder, suicide, etc. The feasts are prepared for these spirits, so that they do not do anything ill towards the families. People are advised to refrain from doing outdoor activities like swimming and hiking to avoid bumping and annoying the roaming spirits.

Both the gods and the ancestors who have died a moral death (not through suicide) can be considered 神. During the ghost month, Chinese believe that the dead come back to visit their families, which is why each household prepares a spread of dishes for them to enjoy. Others leave vacant seats around their dining table for their deceased relatives. Although it’s common practice to offer food for the dead at any time of the year, it is most prominent during the ghost month because this is when the heavens are open to allow the spirits to leave freely. This enables all the spirits – even those from long ago – to visit their families.

For evil spirits, the ghost hunter is most terrifying.

钟馗 is also a ghost, but he was chosen to be the ghost hunter because of his intellect and potential. Centuries ago, he was a bright scholar who topped the imperial examinations, but because of his ugly appearance the emperor stripped off his title. So then he became a 鬼 himself when he committed suicide. Since then, his statue and portrait has become a staple in every household to ward off evil spirits. The King of the Underworld will decide on the fate of the spirits.

In mythology, the King of the Underworld is Hades. He was the one who decided to give 钟馗 the title of hunter, and he judges the fate of all those who enter the lower realm.

Put these fruits on top of the altar.

神坛 serves as the tables of the gods and the spirits. All offerings and feasts prepared are placed here. They are usually placed in the middle of the house or near the door during 中元节 to invite all spirits to dine.

Hold this incense and bow three times to your ancestors.

香 can be considered a basic form of offering. Chinese would hold the incense while praying to the gods and talking to their ancestors. For the past few years, the price of paper money has increased.

纸钱 can also be referred to as 金钱 (joss paper). This is burned as an offering to the spirits for them to use in their world.

Please prepare the offerings for the ancestors.

Rice grains, coins, pork, chicken, vegetables, fruits, wine, cigarettes – all these are prepared as offerings to the spirits. But for the gods, only 素食 (sù shí) or vegetarian dishes are given as offerings.

During the Chinese Valentine’s Day, all single ladies will go and worship the gods.

Before you think that everything is evil and negative during 鬼月, let me introduce you to Chinese Valentine’s Day. Don’t think that the Chinese don’t celebrate the heart’s day during February, they still do. But for the single folks out there (especially for the ladies), the seventh day of the ghost month is very special. Done in commemoration of the forbidden love between the daughter of a goddess and a mortal, worshippers believe that when you bring offerings and pray to the gods in the temple, your wish for a happy and blessed love life will come true.

And if you want to learn more about Chinese festivals and holidays, be sure to check out FluentU, the best way to learn Chinese with real-world videos like music videos, commercials, news, and inspiring talks.

If you like learning real-world Chinese, then you’ll love FluentU.