Like with English, German dialects spoken in various German-speaking countries can be pretty different from each other.

And Austria is no exception.

Yes, they do speak German there—but if you want to thrive in that country, you’ll need to know a certain set of vocabulary, plus develop the ability to understand a pretty confusing accent.

Learn some new vocabulary, practice understanding pronunciation, and you’ll be the king or queen of Osterreich (Austria) from Vienna to Innsbruck.

Why Do I Need to Learn Austrian German, if I Already Know German?

The Hapsburgs set the standard.

Back in the 1700s, Germany, as we know it today, was a series of independent kingdoms. The largest German-speaking swath of land was the Hapsburg Empire, a territory that comprised much of Central and Eastern Europe, including present-day Austria. Many languages were spoken within this region, but when the German-speaking Hapsburg rulers introduced compulsory schooling in the late 18th century, they used their own language as the standard. And thus Austrian German was born.

It will help you in Northern Italy and Bavaria as well.

Austrian German is still spoken in some parts of Northern Italy, chiefly the South Tyrol, which was part of the Austro-Hungarian Empire until 1918. If you find yourself in this section of Italy just south of the Alps, you just might have a chance to use Austrian German.

On top of that, on the other side of the Alps in Bavaria, which is part of Germany, your Austrian German will also come in handy. Remember that the German language varies quite a bit region-to-region within Germany. The Bavarian accent sounds quite similar to the Austrian accent (after all, Bavaria is right next to Austria, far away from the Prussian strongholds in the North) and the two regions share vocabulary as well.

You can see plenty of beautiful sights in Austria.

If you learn Austrian German, you’ll be better equipped to travel in Austria, a country full of beautiful places to visit and explore.

Vienna, the country’s capital, was also the undisputed capital of classical music during the days of Mozart and Beethoven before becoming a Paris-esque center of decadence, art and debauchery in the early 20th century. Today’s Vienna is a clean, calm (at least compared to Berlin!) center of classical music and Baroque palaces.

Salzburg, nestled to the west at the foot of the Alps, is perhaps best known as the home of the famous von Trapp family, who were immortalized by Hollywood through the movie “The Sound of Music.”

Nearby Innsbruck is a winter sports capital as well as another cute historical city. And let’s not forget the mountains, where you can ski, hike, pretend to be Maria von Trapp or just enjoy the beautiful scenery while sipping a beer and eating a strudel.

10 Differences Between Austrian and High German

Are you ready to jumpstart your Austrian German education? Study these 10 differences between Austrian and High German, and soon you’ll be navigating Vienna with the aplomb of Freud.

In Germany, you say “Guten Tag” (“Good day”) to greet people. In Austria (and in Bavaria!) you say “Grüße Gott” (“May God greet you”). This greeting has its origin in the fact that Austria and Bavaria are traditionally Catholic regions. Northern Germans often don’t look kindly on this greeting—they might respond with a sarcastic “Wenn ich ihn sehe” (“If I see him”), a jab from the more Protestant and atheistic North.

In Berlin, you would ask for your sandwich on a Brötchen (bread roll). Not so in Austria or Bavaria. In these regions, rolls are known as “Semmel.”

3. Erdapfel versus Kartoffeln, Paradeiser versus Tomate

In English, we may pronounce “tomato” differently (“I say tomato, you say tomahto,” as the old song goes) but in the German-speaking world, different regions have completely different words for this food. In Austria, tomatoes are called “Paradeiser,” while they are called “Tomate” in much of Germany. Potatoes also differ from region to region. In Berlin, they are called “Kartoffeln,” while in Austria, you’ll find them sold under the name “Erdapfel” (literally “apples of the earth,” similar to French’s pomme de terre).

In Germany, you’ll find bathrooms labeled “Toilette,” or with the British “WC.” In Austria, no such luck. In this part of the world, the toilet is called the “Klo.”

Ready to eat in Berlin? Say “Guten Appetit” (“Good appetite!”) and dig in! Ready to eat in Salzburg? “Mahlzeit” is the word you’re looking for. Remember, knowing all the niceties for practicing good etiquette is important.

When I visited Vienna in 2010, I didn’t know a word of German, so I happily roamed the streets without understanding anything.

When I visited Bavaria in 2015, I stared at waiters and shopkeepers in horror, thinking, “What are they saying?”

The Bavarian/Austrian accent can be hard to understand for someone who’s learned German in the North. The vowels are long and broad, and the cadence sounds more Swedish than anything.

The accent will be the hardest component of Austrian German for you to understand. You can always ask someone if you’re confused about a vocabulary word, but if you can’t understand what the person said at all, you’ll be in deeper trouble.

That’s why we recommend, before you go to Austria, that you spend some time immersing yourself in the language.

One way to do that is by listening to Austrian radio. It’s a great way to instantly immerse yourself in the unique sounds of the country.

Another good program for immersing yourself in the Austrian accent is FluentU. This language learning program has authentic German videos like interviews, vlogs, movie and TV show clips and more.

Videos have interactive captions in German and English, both of which are optional. Follow along with the video and when you come across an unknown word, you can add it to your flashcards without even leaving the video. 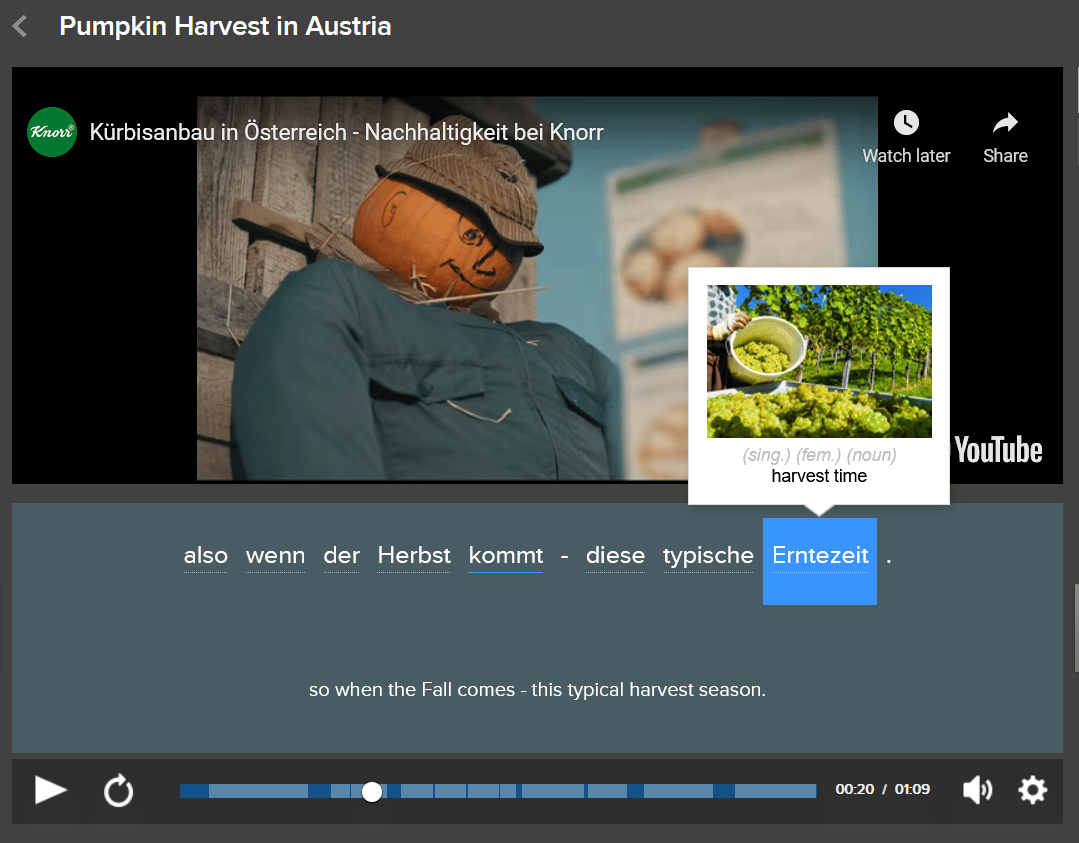 The flashcards in FluentU are multimedia and include video clips of the word in use, so you can clearly hear the difference between Austrian German and other dialects and accents.

You know how some German verbs take sein (to be) and some take haben (to have) in the past perfect form? (Example: “Ich habe angeruft,” or “I called,” versus “Ich bin gefahren,” or “I went.”) In Austrian German, you’ll find that a few haben verbs take sein. Sitzen (to sit) and liegen (to lie), for example, take haben in Germany, but sein in Austria.

In Germany, hospitals are called “Krankenhaus,” but in Austria, you would be rushed to the Spital if you had an accident. This is an important one if you’re planning to take advantage of Vienna’s biking culture, or Austria’s skiing and hiking opportunities. Better safe than sorry, right?

In a grocery store in Germany, you would buy a Tüte to carry your purchases out. In Austria? A Sackerl.

Some people say that, like the British and Americans, Germans and Austrians are two peoples divided by a common language.

But come on, it doesn’t have to be that way!

Practice understanding the Austrian accent, study up on some of these key vocabulary differences, and you’ll do just fine in Germany’s southern neighbor.

You could even look into an immersion program in Austria.

But no matter what, if you encounter a word you don’t understand, just ask! This can be a great way to make new Austrian friends.