You might find yourself getting bored with using the same old terms for greeting and leaving people in German.

If you’re looking to learn some new, real-world German greetings, here are a few other options of German Grüße (greetings) and Abschiedsgrüße (goodbyes) to consider.

9 Ways to Say Hello in German

Even if you’re just starting out with German, it’ll be useful to have a look at these German greetings—so that when someone greets you with a friendly Alles klar? you won’t stare back at them in complete confusion (like I did a few times until I figured out what it meant), but can instead respond Gut, danke!

As mentioned above, this is one of your typical German greetings.

Nice and easy to pronounce, and suitable for just about every situation.

Turns out Germans say this too! Go ahead and use Hi when speaking with young people or in informal settings.

Although you might think of Guten Abend as being similar to saying “Have a good night,” it sounds more old-fashioned in German—more like “Good evening.” Maybe reserve this one for formal situations, or when speaking to people who are much older than you.

When talking to someone you would call “Sir” or “Ma’am,” Guten Tag might be an appropriate greeting.

This is how to say “How are you?” in German. Use dir when speaking to someone young or someone you know very well. Ihnen is the appropriate formal address for a stranger, especially someone older, and people in positions of authority.

In many English-speaking countries, it’s typical to say “How are you?” to everyone you speak with, including waitresses and store clerks. However, in Germany, this is not as common, so it’s best to use this greeting with people you know.

Similar to Wie geht es dir, but more casual. This essentially translates to “What’s happening?” or “How’s it going?” (Geht’s is a shortened form of geht es, so Wie geht’s? literally means “How goes it?”)

Use these greetings the same way you’d use the equivalent English phrases. Perfect for your classmates and friends, potentially not cool with your new boss or super-strict professor.

This one can be a bit confusing. Colloquially, it means the same as Wie geht’s­: what’s up, how’s it going, how’s it hanging.

Again, fine to use with young people in casual conversation. However, what you have to remember about Was ist los? is that it can also mean “What’s wrong?” especially when you add in a denn. Was ist denn los? usually means “What’s the matter?” and Was ist hier los? can be used to ask “What’s wrong here?”

But don’t worry: in conversation, you’ll most likely be able to tell the difference between these questions by tone of voice and context.

Similar to Was ist los, Alles klar literally translates to “Everything alright?” However, it’s often used as a casual greeting among young people.

When used in that context, Alles klar is basically the same as saying, “What’s up?” in English.

I’m including these on the list for those of you who might find yourselves in Austria, Switzerland, or southern Germany, where these German greetings are used. Saying Grüß Gott in northern Germany would most likely surprise whoever you’re talking to.

Literally translating to “God greets you,” this can seem like an old-fashioned way of saying hello to someone who is not from southern German-speaking regions. However, you’ll definitely still hear it in places like Bayern and Austria, so it’s good to know in case you visit these locations.

Remember to only use Grüß dich with people you would address casually, and use Grüß Sie for everyone else.

This is also a southern greeting, which can be used as a goodbye as well. Similar to Grüß dich, you might hear Servus used in Bayern and Austria, as well as elsewhere in Central and Eastern Europe.

Servus comes from Latin, and as a greeting or goodbye it was originally a shortened version of the Latin phrase “At your service.”

If you aren’t sure about some of these greetings or when to use them, you can look for resources to watch native speakers using them in context.

YouTube channels like Easy German can give you more insight into greetings and which ones native speakers use.

You can even look for German talk shows, which often use these greetings, as well.

A program like FluentU can also help, since it lets you watch authentic German videos with interactive captions and a contextual dictionary.

Search for any word in this list and you’ll see any FluentU videos that use it, as well as flashcards for every individual meaning and nuance of how the word can be used. This means that you can learn greetings and goodbyes from native German content like movie clips, music videos, commercials, vlogs, interviews and more.

For instance, I searched for Alles klar?, clicked on its various flashcards and browsed around the sample sentences and clips from all the videos where it appears. This allowed me to see it in use as a greeting, but also as a way to say “it’s all good,” like in this clip about trying to beat the world record for the number of scoops of ice cream on one cone (spoiler alert, they don’t get very close): 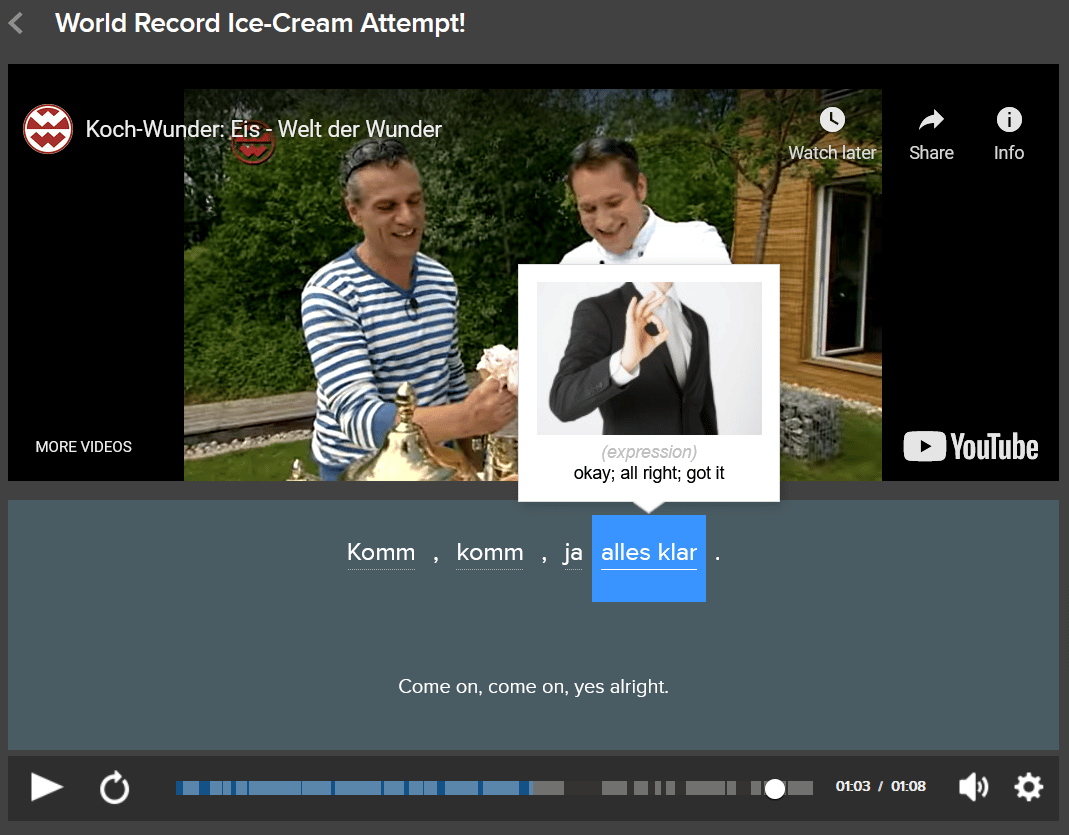 FluentU is a browser-based program, and it’s also available as an iOS and Android app. Plus, you can save any words you want to your flashcard lists and practice them with personalized quizzes.

13 Ways to Say Goodbye in German

The German equivalent of “bye” or “bye-bye,” Tschüss is a nice, informal way of saying goodbye in just about any situation.

In my experience, Ciao is super common in Berlin, where you’ll probably hear it just as often as Tschüss.

Obviously, it comes from Italy (where it is both a greeting and a goodbye), but people tend to use Ciao as a way of saying bye in many European countries.

As mentioned above, this is pretty old-fashioned, and definitely not your typical German goodbye. May be appropriate for formal circumstances.

Think of it as like saying “Farewell”—probably too formal for your friends or classmates.

Not as formal as Gute Morgen/Abend, this is the German version of “Goodnight.”

This is equivalent to “See you soon,” and is a good, casual way of saying bye to friends.

These both mean “See you later.”

Just like Bis bald, these are great options for saying bye to casual friends and acquaintances.

Another nice way to see “See ya later.”

If you add a dann to say Wir sehen uns dann, it means “See you then,” which can be a good way to say bye after making plans with someone.

This is a way to say “See you next time,” and would be appropriate for saying goodbye to someone you see regularly: for example, a classmate or co-worker.

This literally means “We’ll speak soon,” or “We’ll speak later.” Equivalent to the English “Talk to you later.”

This is essentially equivalent to “Talk to you later,” and is another good way to say bye on the telephone.

These are good ways to say bye in German to just about anyone.

You’ll often hear store clerks using these phrases. If someone you know says this to you, you could respond with Dir auch! (“You too!”).

This means “Have fun!” and can be used in many conversational contexts—for example, when saying goodbye to friends who are going to a party, on a trip, etc.

This means “Have a good trip!” and is a good way to say bye to someone who’s going on a vacation or journey of some kind.

Now you won’t have that rude awakening about German greetings that I had! Use these words to say hi or bye in German like a native speaker would. Tschüss!